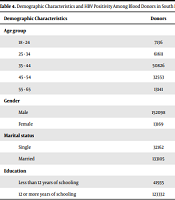 Transfusion transmissible infections (TTIs) are the most frequent complication of blood transfusions. This fact stresses the need for regular evaluation and monitoring of TTIs in blood donors.

This study was done to determine the prevalence of the hepatitis B virus (HBV), hepatitis C virus (HCV), human immunodeficiency virus (HIV), and syphilis among blood donors at the South Khorasan Transfusion Center (SKBTC) in South Khorasan Province, Iran. This report is the first of its kind that has been performed in this region.

A retrospective study was carried out on 165,267 blood donors at the SKBTC from 2006 to 2016. Data were analyzed on the metrics of donation status, age, gender, educational level, and serologic results for the infectious markers. Statistical analysis was performed using SPSS software (version 16.0).

The overall seroprevalence rates of HBV, HCV, and HIV infections per 100,000 donations were 247, 21, and 0.6, respectively. There was no positive donor for syphilis. HBV and HCV infections in first-time donors were present at significantly higher rates than in regular and repeat donors (P < 0.001 and P = 0.003, respectively). Although gender was not found to be significantly associated with HBV and HCV (P = 0.32), there was a significant relationship between younger age (P < 0.001) as well as lower educational level and hepatitis agents (P < 0.001). Moreover, being single evinced a significant association with HCV seropositivity (P = 0.001).

This report found a decreased prevalence of TTIs relative to the most of previous reports. This decrease may have resulted from public health programs, improved donor selection, improved recruitment of repeat/regular donors, and the use of highly sensitive kits for the screening procedure.

Each year, about 75 million blood units are collected in the world (1). About one-third of the world’s population will require blood/blood products throughout their life span. Although blood transfusion can be a lifesaving procedure, it can also have disastrous health and economic consequences on its recipients, their families, and society (2-4). Each recipient is at risk of contracting transfusion-transmissible infections (TTIs), such as hepatitis B virus (HBV), hepatitis C virus (HCV), human immunodeficiency virus (HIV), and Treponema pallidum (syphilis) (3). HBV is the main cause of chronic liver morbidity (5), while HCV is the primary cause of post-transfusion hepatitis (6). The estimated global prevalence of HBV and HCV infections is about 257 million and 71 million, respectively (7). The overall prevalence of HBV, HCV, and HIV was reported to be 0.56, 0.013, and 0.004%, respectively. In Iran, screening of volunteer blood donations for HBV, HIV, and HCV became mandatory in 1974, 1989, and 1996, respectively (8).

Despite considerable progress made over the last few decades in the prevention of TTIs via blood transfusion by donor education, utilizing the pre-donation questionnaires, voluntary donation, donor deferral, and advanced donor screening assays (7, 9-11), TTIs have not been totally eliminated (7, 12, 13). Therefore, the safety of transfusions is still an issue of interest (2). Evaluating TTI prevalence and incidence is a critical approach to identify potential changes in the epidemiology of these infections in the population and monitoring the effectiveness of donor education as well as selection and screening procedures (14, 15).

The aim of the present study was to evaluate the prevalence of four TTI infections among first-time, regular, and repeat blood donors who attended the South Khorasan blood transfusion service (SKBTC), South Khorasan province Iran, from 2006 to 2016.

In this retrospective study, 165267 healthy, voluntary, non-remunerated blood donors referring to SKBTC from 2006 to 2016 were selected based on the standard pre-donation screening procedure. Donors were categorized into three different groups: first-time donors who donated for the first and only time; repeat donors who had a history of the previous donation but the time between two donations was longer than a year; and regular donors who were donating more than once a year.

All donations were screened for the presence of HBsAg, HCV Ab, and HIV (Ag/Ab) by third-generation enzyme-linked immunosorbent assay (ELISA) kits, while syphilis was screened by rapid plasma reagin (RPR) test based on the Iranian Blood Transfusion Organisation (IBTO) instructions. The initially positive samples were re-examined, and the repeatedly positive ones were considered seropositive for infection. Repeatedly reactive donations were then confirmed with hepatitis B core antibody (anti-HBc) and HBsAg neutralization tests, HCV recombinant immunoblot assay (RIBA), and HIV western blot. HIV-negative samples evidenced by western blot were tested by HIV p24 antigen and monoclonal neutralization assay if the results were repeatedly reactive. Syphilis was confirmed using the Treponema pallidum Hemagglutination (TPHA) test. The applied kits for screening and confirmatory tests are given in Table 1.

Statistical analysis was performed using SPSS software (version 16.0). Groups were compared by the chi-square test. Logistic regression analyses were conducted to examine the correlates of TTIs prevalence. P-values of less than 0.05 were considered statistically significant.

Over an 11-year period, a total of 165267 donations were collected from volunteer donors, with a mean of 15024 donations per year. The donor population consisted of 152098 (94.23%) males with a mean age of 29.5 years and 13169 (5.77%) females with a mean age of 32.8 years, making a male/female ratio of 11.5 to 1. The most frequent infection in donors was HBV followed by HCV. More specifically, among all donors, 409 donations (0.25%) were positive for HBV and 35 (0.02%) for HCV. The annual rate of seropositivity varied, but there was no discernible upward or downward trend (Table 2). In 2015, there was only one confirmed positive result for HIV -, which came from a repeat donor. Surprisingly, there was no syphilis-positive donor (Table 3). Demographic characteristics and HBV and HCV positivity among blood donors are shown in Tables 4 and 5, respectively.

Table 2. The Annual Prevalence Rates (PRs) per 100,000 Donations for HBV and HCV Infection Among Blood Donors from 2006 to 2016
Table 3. The Screening and Confirmatory Results of the Infectious Agents
Table 4. Demographic Characteristics and HBV Positivity Among Blood Donors in South Khorasan Province, Iran a

In this study, for the first time, the overall frequency of HBV, HCV, HIV, and syphilis infections per 100,000 volunteer blood donors referred to the SKBTC were reported.

South Khorasan ("Khorasan-e Jonoubi") is a province located in eastern Iran, and Birjand is the center of the province (1). The social determinant of health status is reported to be low compared to other provinces in Iran (2). However, in comparison with studies on Iranian populations, in our study, the overall prevalence of HBV was lower than that reported by Amini Kafi-Abad et al. (8), Khedmat et al. (16), and Mohammadali and Pourfathollah (15). Compared to other countries, HBV prevalence in the present study was much lower than that of Turkey (4.1%) (17), Pakistan (3.9%) (18), and Germany (19). The prevalence of HBV in our study was similar to that reported by de Almeida-Neto et al. in Brazil (20); however, it was higher than in France (21) and Australia (22).

The overall frequency of HCV-Ab in our study was lower than in other studies on Iranian blood donors, such as those conducted by Khedmat et al. (16), Amini Kafi-Abad et al. (8), Mohammadali and Pourfathollah (15), Rezvan et al. (23), and Sajjadi et al. (24).

The pooled prevalence of HCV among Iranian blood donors was 0.5% in a meta-analysis by Khodabandehloo et al. (25), which is substantially higher than our data.

The prevalence of HCV in our province was also lower than that in other countries, such as Germany with 0.07% (19) and India with 0.84% (26). As expected, the present result was lower than the prevalence of HCV in the Iranian general population because blood donors are considered to be a healthy population at lower risk of infectious diseases (27). Furthermore, our findings demonstrated that first-time donors had considerably higher frequencies of HBs-Ag and HCV-Ab positivity than repeat and regular donors, which is consistent with prior research in Iranian populations (8, 28), as well as in other studies in the United Kingdom (29) and Australia (30).

The most trustworthy group for transfusion is voluntary, repeat, and regular blood donors (31, 32). As a result, the observed range in prevalence rates is not surprising. Other studies (2, 33) have found that the number of frequent blood donors in their demographic was significantly larger than the number of first-time blood donors.

A surprising result of the present study is that no positive case of syphilis was found during 11 years. Compared to the results obtained in other studies, Yildiz et al. reported that 0.10% of blood donors in Adana, Turkey were positive (4). Additionally, syphilis positivity was reported as only 0.004% and 0.01% in Iran (15, 16).

We also found no co-infections in any of the positive donors, which was another amazing result of the present study. However, other studies have reported a significant association between different infections due to their similar modes of transmission (3, 37).

In this study, no difference was observed regarding the marital status of donors infected with HBV. This finding may be due to the HBV vaccination of the general population. However, the prevalence of the HCV marker in single donors was higher, possibly due to sexual reasons or drug injection; no vaccination is provided for the HCV infection.

A higher prevalence of HBV and HCV infections in donors with low educational level accentuates the requirement for the improvement of educational procedures for the risk factors and routes of transmission and also the importance of safe blood donation for donors.

Although the number of females was less than male blood donors, due to their fear of becoming anaemic after blood donation or because they were found to be anemic (38, 39) and did not meet the criteria, the prevalence of HBV and HCV infections was not found to be significantly different for both genders. This was inconsistent with other reports from Iran (8, 15). However, Noubiap et al. reported a similar result (3).

The lower prevalence of TTIs, especially HIV and syphilis, in our study may have resulted from a conventional culture in South Khorasan Province so that prior to marriage, people contemplate sexual morality and the avoidance of high-risk behaviors, such as sexual intercourse with several partners. Improved recruitment of low-risk donors may be another reason for this issue. Furthermore, the number of donors in this study was much lower than similar Iranian studies, such as Mohammadali and Pourfathollah (15), in which more than 2 million blood donors were investigated. However, the prevalence of syphilis in that study was just 0.004%.

The remarkable divergence in TTIs prevalence among blood donors in different populations could be due to a variation in the study population, sample sizes, quality of public health services, different lifestyles, habits, and rates of high-risk behaviors in different geographic regions, as well as different kits used for determining the infectious agents (11, 40).

It was the first report from South Khorasan province. The risk factors for HBV and HCV infection were younger age, being a first-time donor, and being less educated. TTI rates were found to be low among blood donors in South Khorasan Province, probably owing to improvements in blood donor screening methods and the region's traditional culture. Continuous monitoring of the prevalence of TTIs among blood donors may aid in the recruitment of donors at lower risk leading to improved blood safety. However, it is necessary to realize that it is never possible to eradicate all risks of TTIs; therefore, we have to continue to improve the quality of the screening program as often as we can.

This project was accepted by the Birjand University of Medical Sciences (project No. 4666). We gratefully acknowledge all the staff of SKBTC.