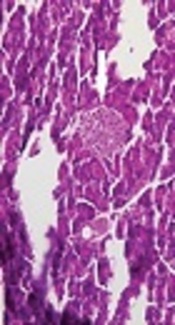 Hyperglycemia-mediated oxidative stress has been participated in complications of diabetes. Although the beneficial effects of flavonoid quercetin in diabetes is known, target of this flavonoid in molecular level is unclear. This study aimed to investigate expression level of glucokinase and glucose-6-phosphatase as key enzyme in glucose metabolism in diabetes model rats treated with

24 adult male Wistar rats were used in this study. Healthy control group (n = 8) and two streptozotocin-induced diabetic rats (60 mg/kg) as diabetic control group (n = 8) and quercetin treated group (15 mg/kg, intraperitoneally) (n = 8). At the end of treatment period (21 days), fasting blood sugar, malondialdehyde, and total antioxidant capacity in three groups of rats were measured, and the expression of stress proteins such as HSF-1, HSP27, and HSP70 as well as the enzymes glucokinase and glucose-6-phosphatase were assayed by real time PCR.

These findings indicate that therapeutic effects of quercetin could be through increase in transcript level of glucokinase simultaneously decreasing expression level of glucose-6-phosphatase and stress proteins. This is useful especially for Health-care practitioners to set up clinical use of quercetin for nutritional management of diabetes.

The world health organization (WHO) has estimated that 347 million people worldwide have diabetes (1). Diabetes mellitus is a metabolic disorder characterized by hyperglycemia and the inadequate secretion of endogenous insulin (2, 3). Persistent and chronic hyperglycemia in diabetics leads to high oxidative stress followed by the depletion of antioxidant system activity and overproduction of reactive oxygen species (4) that is known to participate in the progression and complication of diabetes mellitus (5). Moreover, oxidative stress can cause damage to many cellular components such as lipids, proteins, and DNA. The antioxidant system plays an important role in defending the body by protecting cells and cellular components from damage (3).

Stress or heat shock proteins (HSPs) are a group of highly conserved proteins whose expression is induced by different kinds of stresses, including oxidative stress, viral infection, chemical exposure, increased temperature, and irradiation (6-8). Mammalian HSPs have been classified into five main families according to their molecular weight: HSP100, HSP90, HSP70, HSP60, and small HSPs (15 - 30 kDa) such as HSP27 (9). The induction of HSP mRNA starts with the activation of the heat shock transcription factor (HSF); that is activated by many stresses (6, 10). These proteins act as molecular chaperones and are involved in the correct folding of newly synthesized peptides and the refolding of denatured or misfolded proteins (11, 12). In the current study, it was hypothesized that oxidative stress resulting from diabetes would induce the expression of HSPs such as HSP27 and HSP70, and quercetin could ameliorate diabetes-induced gene expression.

Agents with hypoglycemic and antioxidant activity could be useful in the defense against diabetic complications (13). The targeting of GK and G6P by antihyperglycemic drugs is a therapeutic strategy in the treatment of type 2 diabetes. This strategy can improve high blood glucose and subsequent complications in diabetic patients (14, 15). Quercetin (3, 3’, 4’, 5 - 7 pentahydroxy flavone), a widely-distributed bioflavonoid, has antioxidant and hypoglycemic properties in vivo and in vitro (5, 16-21). Quercetin is effective in preventing oxidative damage by several mechanisms, such as scavenging ROS and protecting against lipid oxidation (16, 17). This study was designed to investigate the hypoglycemic and antioxidant properties of quercetin by studying its effect on the expression level of hepatic GK, and G6P and pancreatic HSP27, HSP70 and HSF-1.

In this study 28 male Wistar rats, weighing 200 ± 20 g, bred and raised at the university animal quarters were used. The rats were housed in cages and given rat standard chow diet and water ad libitum. Type I diabetes was induced by intraperitoneally injecting streptozocin (60 mg/kg body mass) before the beginning of treatments. After two weeks of injection, animals with a plasma glucose concentration over 16.6 mM, were considered diabetic. The 16 diabetic rats were randomly divided into 2 groups (n = 8) as follow: one diabetic experimental group receiving quercetin (15 mg per kg body weight) once daily and one diabetic control group receiving normal saline equivalent volume to the test treatment for 21 days. Eight healthy rats as normoglycemic control group were also treated daily with normal saline. The quercetin dose we used in this study was based on our previous study (20). The animals were decapitated at the end of the treatment period (21 days), and blood was collected for MDA and antioxidant assay. Hepatic and pancreatic tissues from different groups were dissected, immediately frozen, and stored at -80°C for further analysis. In all procedures laboratory animals were conducted in accordance to the institutes of ethics committee for care and use of laboratory animals and approved by the ethics committee of the Birjand University of Medical Sciences using the IR.bums.REC.1394.437 Code.

Serum level of malondialdehyde (MDA) as a marker of oxidative stress was measured using thiobarbituric acid reactive substances (TBARS) method (22). A mixture of serum samples and TBARS reagent was heated in a boiling water bath and absorbance was finally measured at 532 nm.

The FRAP assay, according to the procedures of Benzie and Strain (1996), was used to evaluate total antioxidant power in the serum of the different groups. Antioxidant power in the samples reduced ferric to ferrous iron and led to the formation of a colored ferrous-tripyridyltriazine complex. The intensity of the colored complex was monitored at 593 nm (23).

Total RNA from excised liver and pancreas tissues of the groups was isolated using the TRIzol extraction reagent (Bioneer, Korea) following the manufacturer’s recommendations. The RevertAid H minus first strand cDNA synthesis kit (Fermentas, USA) was used to reverse-transcribe 1 µg of RNA in a final volume of 20 µL. Quantitative real time-PCR of β-actin (reference gene), pancreatic HSP27, HSP70, HSF1, and hepatic glucokinase and glucose 6-phosphatase was carried out in the ABI StepOne™ real-time PCR system (Applied Biosystems, Foster city, CA) using specific primers identified in Table 1. The intensities of the mRNA levels were normalized to those of the β-actin product as ratios of producing arbitrary units of relative abundance. Relative gene expression (2-ΔΔCT) between the quercetin treated group and the diabetic control group was assayed using the CT method (24).

Beta cells regeneration in response to quercetin was evaluated using pancreatic islets counting under a light microscope. After fixation, paraffin blocks of pancreas tissue were cut into 5 µm thick sections and stained with haematoxylin and eosin. The total number of islet cells in each section was enumerated and, on graph paper, the total area of each stained section was characterized, and the average number of pancreatic islets per cm2 was calculated (25).

bData are expressed as mean ± SD of 8 rats in each group.

cIn each column, was considered significant at P < 0.05 when compared with the diabetic control group.

As seen in Figure 1, a significant increase (P < 0.05) in the mRNA level of HSP70 in diabetic rats was seen when compared to normal tissue. Our data also indicated a significant (P < 0.05) decrease of HSP70 expression in quercetin-treated diabetic rats when their tissue was compared with normal tissue from the control group. Similarly transcript level of HSP27 in diabetic control group was higher than those of normoglycemic control and treatment with quercetin decreased its expression level (Figure 1).

The results of the present study revealed that quercetin is able to normalize blood glucose level and reduce the hyperglycemia-mediated oxidative stress in diabetes. The effects of quercetin on MDA and total antioxidant capacity is in agreement with the results of Coskun et al. (2005) and Mahesh et al. (2004) (4, 5). Alam et al. (2014) recently reported that quercetin treatment increased the levels of glutathione, SOD, catalase, and glutathione-s-transferase and decreased MDA levels in diabetic rats (26). This indicates quercetin acts via decline in MDA level as we observed in our study.

Several studies have shown the hypoglycemic effect of quercetin in diabetic rats (5, 20, 26, 27). Our results show that hypoglycemic effect of quercetin may be through increasing the transcript level of GK and decreasing that of G6P (see Figure 2). Information regarding the effects of quercetin on the expression of enzymes involved in glucose metabolism is limited; however, Jung et al. (2006) previously showed that flavonoid hesperidin and naringin significantly increased the expression of GK, and naringin decreased the expression of phosphoenol pyruvate carboxykinase and G6P in the liver of diabetic mice (28). The effects of bis (quercetinato) oxovanadium IV (BQOV) on normalizing the expression of G6P and GK in the liver of mice with STZ-induced diabetes were also demonstrated by Shukla et al. (2007) (29). Furthermore, Vessal et al. (2003) has previously reported that hepatic GK activity was increased by quercetin treatment (20). Our findings demonstrate that the expression of HSP70, HSP27, and HSF-1 was significantly increased in the pancreatic tissue of diabetic rats. These results supported our hypothesis that hyperglycemia-mediated oxidative stress induced the expression of HSPs. Quercetin reduced the expression of HSP70 and HSP27 in the pancreatic tissue of the treated group compared with that of the control group (see Figure 1). Several studies have indicated that the expression of HSP varies in different tissues of diabetic patients. For example, the expression of HSP in insulin-sensitive tissues, including muscle, is low (12, 30) while the levels of HSP are higher in some tissue, such as that of the liver (12, 31). In case-control studies performed on type 2 diabetes, elevated levels of serum HSP70 and HSP60 have been shown. They indicated that the serum level of HSP70 is related with the duration of disease, so the level of HSP70 was higher in long-term patients than in recently diagnosed diabetic patients (6, 12). However, Kurucz et al. (2002) reported decreased level of muscular HSP72 in type 2 diabetic patients compared with the control group in their case-control study. They also reported that heat shock proteins may be involved in the pathogenesis of skeletal muscle insulin resistance in type 2 diabetes. Insulin resistance and type 2 diabetes mellitus are associated with the modified expression of heat shock protein by insulin sensitive tissues, and thus those tissues become susceptible to failure by oxidative stress (11, 32). Based on the literature, the serum level of HSP27 can be used as a marker for diagnosing complications of diabetes. Based on the literature serum level of HSP27 may be a novel marker for diabetic neuropathy, furthermore, may be used as a marker for diagnosing diabetic nephropathy (11, 33). We found in our study increased level of HSP27 in diabetic rats while quercetin could decline the transcript level. Based on the results of histology, quercetin supplementation leads to the regeneration of β-cells and the formation of microislets in diabetic rats (see Figure 3). This result support protective effect of quercetin in pancreatic tissue and is accordance with Coskun et al. report that quercetin treatment inhibits the degeneration of β-cells and elevates the region of insulin immunoreactive β-cells (4). Based on the results presented here, quercetin could ameliorate oxidative stress in diabetic rats by increasing total antioxidant capacity and decreasing lipid peroxidation. Reduced levels of HSP in treated diabetic rats confirm the ability of quercetin to decrease diabetes-mediated stress protein expression. Moreover, the mechanism of the hypoglycemic effect of quercetin may be through modifying the expression of GK and G6P. This study could lead us to understand the beneficial effects of quercetin at the molecular aspect for nutritional management of diabetes. Interestingly effect of quercetin on GK expression was more notable in comparison with G6P that could be as potential therapeutic target for design of new drugs based on natural medicine. To understand the exact mechanism of action, further studies are required.

This investigation was supported by grant No. 711 from the office of vice chancellor for research, Birjand University of Medical Sciences.

Copyright © 2018, Modern Care Journal. This is an open-access article distributed under the terms of the Creative Commons Attribution-NonCommercial 4.0 International License (http://creativecommons.org/licenses/by-nc/4.0/) which permits copy and redistribute the material just in noncommercial usages, provided the original work is properly cited
download pdf 2.99 MB Get Permission (article level) Import into EndNote Import into BibTex
Number of Comments: 0