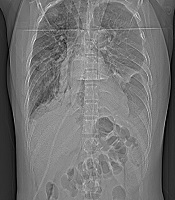 Cystic echinococcosis (CE) is an important zoonotic disease between humans and mammalians that causes remarkable economic loss and public health problem in different regions of the world.

We present the case of a 43-year-old male patient living in Nehbandan city, Iran. He referred to the Nehbandan Hospital with sudden dyspnea. Two days before admission, he had suddenly suffered from the shortness of breath and had admitted to the Nehbandan Hospital to receive penicillin, but was discharged. The next morning, due to the exacerbation of the shortness of breath, he returned to the hospital. Pleural effusion in the left lung was observed in radiography. The patient was transferred to Valiasr Hospital in Birjand city for CT scanning. The anti-Echinococcus specific total IgG antibody was positive.

Hydatid disease should be considered as one of the differential diagnoses in every patient with respiratory symptoms and in those who are living in endemic areas. The early identification of the cyst and its surgical removal will improve the patient’s symptoms. In the present case, following the definitive diagnosis, a surgery was done while treatment with albendazole had started one week before surgery that continued after discharge from the hospital.

Hydatid is a common disease between humans and animals, in which the human is the intermediate host in the cycle of infection. The most prevalent cause of hydatid cyst is Echinococcus granulosus (1, 2). It negatively affects the economy and public health and is associated with severe morbidity and disability. The pathogenicity of hydatidosis heavily depends on the infection extent and severity and the organ of involvement. The cysts most frequently involve the liver, but may occur in any organ, including the lungs, heart, brain, and bones. Cysts often have no symptoms unless they become very large or ruptured. This disease is prevalent in various countries, especially where animal husbandry is common, such as South Africa, South America, Australia, Siberia, Middle Asia, Middle East, North China, Southeast Asia, etc. It is an occupational disease observed in shepherds and butchers (3, 4). Hydatid cyst is frequently found in all parts of Iran, and is the most important parasitic disease, leading to infectious lesions, complications, and mortality in the country (5). In this study, we describe a cystic echinococcosis (CE) patient with difficulties in diagnosis. This study has implications in desert areas such as Birjand in which there is the possibility of misdiagnosis because of the low prevalence rate of the disease.

A 43-year-old man living in Nehbandan city suddenly experienced dyspnea and thus referred to the hospital. Two days before admission, he had suddenly suffered from the shortness of breath and had admitted to the Nehbandan Hospital to receive penicillin, but was discharged. In the next morning, due to the shortness of breath exacerbation, he was admitted again to the Nahbandan Hospital. Pleural effusion was observed in his radiography. The patient was transferred to Valiasr Hospital in Birjand city, East of Iran, for CT scanning. He had a livestock farm. Other patient’s symptoms included dyspnea and occasional edema, sputum, medulla, and pain in the atrophic stomach occasionally in the left shoulder that was intensified with physical activity. Ultrasound of the patient’s abdomen and pelvis indicated that the liver had normal parenchymal dimensions. Bile ducts inside and outside the liver were normal. The gallbladder, spleen, pancreas, bladder, and kidneys had normal conditions. Laboratory reports showed only an increase in the white blood cell count and no microbial contamination was observed in the pleural fluid test. Consolidation appeared in the upper and middle lobes of the left and right lungs, proving the existence of bronchopneumonia. The imaging of the area showed a liquid density of 93 × 47 cm in the left lung lower lobe with the internal hypodense areas, which could have a parasitic cyst like hydatid cyst and could reduce the beginning of abscess formation (Figures 1 and 2). For further investigation, a CT scan was recommended by injection. Injecting CT scan of a fluid-density region with an air-fluid level to the left lung lower lobe without a clear lining could suggest a perforated cyst like hydatid cyst or abscess. On the fourth day of admission, a blood sample was analyzed with enzyme-linked immunosorbent assay (ELISA) for E. granulosus with Vircell kit to determine the anti-hydatid cyst antibody. Hydatid cyst antibody IgG titer was 18.7, which was above 11 and thus positive. CT Scan showing the ruptured cyst in the left lung Hydatid cyst is a major health problem respecting its very high costs and mortality in humans and other animals (6). The period of the disease incubation varies from a few months to a few years. The cyst growth rate is dependent on patient characteristics, involved organ, and geographical characteristics (7). A cyst can be diagnosed using imaging methods, especially sonography, CT scan, and simple radiologic photographs, and diagnosis may be confirmed by finding an antibody in the serum (8). People with this infection have only one involved organ and more than 20% of them have only one cyst (9). The lung is the second most common organ of involvement through the post-liver blood spread in adults but possibly is the most common organ of involvement in children (10, 11). Pulmonary cysts are common in 32% of cases, 22% of bilateral cases, and 20% of cases in lower lobes (12). Most pulmonary cysts are usually found in the right lung, but they are also observed in the left lung with pleural effusion and pain in the left shoulder, as observed in the present case. Treatment options of hydatid cyst are different respecting the clinical findings of patients (13). For pulmonary hydatid cyst, surgery along with perioperative albendazole therapy is recognized as a safe and effective way of treatment (14). Mirsadraee et al. described hydatid cyst as a partial differential diagnosis of most localized lung radiographic lesions, regardless of the site size and the number of lesions (15).

Pulmonary hydatid disease can be indicated by respiratory symptoms mimicking other pulmonary diseases. Therefore, hydatid disease should be considered as a differential diagnosis in patients with respiratory symptoms and also in those who are living in endemic areas. After the definitive diagnosis of CE, here we immediately performed drug treatment with Albendazole and Mebendazole and the patient underwent cyst surgery, cyst withdrawal, and follow-up to be ensured about the complete treatment. Pulmonary hydatid cyst prognosis is appropriate if the cyst is not ruptured. Early identification of the cyst and its surgical removal will improve the patients’ symptoms. Prompt treatment with anti-helminthic drugs in the perioperative period will prevent the disease recurrence. Therefore, it is proposed to consider hydatid cyst as a differential diagnosis during bilateral pulmonary nodules evaluation, especially in endemic areas.

The authors wish to thank the Valiasr Hospital Infectious Diseases Research Center, Birjand University of Medical Sciences for technical support of the project.