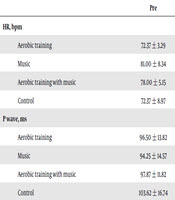 The effect of exercises on the heart has been widely studied. Music can stimulate emotions as well as changes in cardiac activity.

The present research aimed to investigate the effect of aerobic training and music on the electrical activity of the heart in non-athletic men.

According to the results of the study, aerobic exercise with music can help improve some cardiac parameters of non-athletic men.

Music is a strong stimulant to arouse emotions and mood, and is linked to changes in the cardiac activity through affecting brain structures such as the hypothalamus, amygdala, and cortex (1). The effects of emotions and affective traits on cardiac activity are due to several causes such as the information transmission pathways to the cardiac nervous network, including blood gases, blood pressure, and endocrine pathways (2). In addition, the cardiovascular afferent neurons make information on chemical environment of the heart and blood pressure (3). The sensory data regulates the output flow, as well as helps experience emotions as interactive data. Due to this mechanism, emotional feelings from music have an effect on the regulation of cardiac action, including blood pressure, variability of heart rate, respiration rate, and heart rate (4). Many studies have reported the effects of music on the level of anxiety and heart rate, which means that music affects vital parameters of the heart (5). The results of some studies indicate that music has a significant effect on the amount of work done during physical activity compared with non-music conditions. These results indicate the importance of music effects on physical activity response (6). In this regard, various studies have been done on the effects of music on cardiac responses during short-term activities of exercise. It is reported that training with listening to music can significantly decrease the heart rate and level of pressure perception indices and increase respiratory rate, minute ventilation, and stroke volume (7). Nevertheless, Yamamoto et al., found that playing music with a slow and fast beat at rest, during exercise, and during the initial state return did not affect the heart rate (8). Cardiac responses to listening to music during regular exercise are not well defined. On the other hand, it is not only athletes who need exercise for improving physical fitness; non-athletes also need exercise to maintain their physical and mental health. Regular exercise reduces heart rate and helps improve the quality of life and increase longevity (9). Furthermore, sports activities, especially aerobic exercise, are an important part of heart rehabilitation and reduction of cardiovascular mortality in patients with heart disease (10, 11). Research findings on the effect of music on the changes in cardiac parameters during exercise are limited and their results are contradictory. Some studies have shown that music during exercise can significantly improve cardiac performance (7); while a significant or non-significant change in these parameters has also been reported (9). On the other hand, an electrocardiogram is one of the necessary measures to examine the heart and its function, which today is an essential part of the heart’s evaluation. Electrocardiography is an important and non-invasive mean for evaluating cardiac contractions and electrical waves (12).

Considering the above-mentioned issues and the lack of access to a study that has inverstigated the effects of simultaneous aerobic training and music on men's heart function, the present research aimed to investigate the effect of aerobic training along with music on electrical activity of heart in non-athlete men.

In this semi-experimental study, 32 non-athletic healthy men were selected, targeted, and accessible as the sample. To conduct the present study, first, the ECG was measured at resting mode using a 12-channel electrocardiograph device manufactured by the Custo-Med company. The subjects were then divided into four equal groups of eight: (1) aerobic training, (2) music, (3) aerobic training with music, and (4) control group. Inclusion criteria included (1) age between 20 - 45 years, (2) have no history of heart disease, hypertension or neuromuscular disorders, (3) don’t be obese, and (4) have no regular physical activity during the past six months. The exclusion criteria included items such as heart and thyroid problems, supplements, and alcohol. Groups 1 and 3 performed aerobic training for eight weeks, three sessions per week, and 60 minutes each session. In addition, groups 2 and 3 listened to music for eight weeks and 60 minutes each session, while group 4 only had their own daily activities. At the end of the 24 hours after the last training session and listening to music, the ECG was measured again for all subjects, which was the same as the pretest. The protocol for aerobic training comprised in 8 weeks, 3 sessions per week, and each session with 45 minutes of running on the treadmill with 55% - 65% heart rate reserve (based on the Karvonen formula). During running, the intensity of the activity was controlled using manual sensors of the treadmill. It is worth noting that all subjects warmed the body generally for 10 minutes before starting the trainings by stretching and relaxing, and then after the end of the training period, they cooled the body for 10 minutes. In addition, in this research, the traditional Iranian music Salam Alikam by Master Hasan Kasaei was used with moderate tempo. To measure the song tempo, the Equalizer system of KMplayer software was used. The collected data were described in terms of mean and standard deviation. Researchers received introduction letters for ethical and legal considerations from the Islamic Azad University of Marvdasht with number IR.MIAU.REC.1396.874. In addition, to analyze the data, Kolmogorov-Smirnov test, two-way ANOVA, and paired sample t-test were used; statistical significance was set at 0.05.

Demographic characteristics of the subjects and the pre-test and post-test levels of the variables in four groups of study are presented in Tables 1 and 2. The results of paired sample t-test in Table 2 showed that in aerobic training, music and aerobic training with music groups in the post-test, the heart rate significantly decreased and QRS wave significantly increased compared to the pre-test (P ≤ 0.05). However, there were no significant differences in pre-test and post-test variations of the P wave, PQ interval, QT interval, and QTc (P ≤ 0.05). In the control group, there was no significant difference in pre-test and post-test variations of the heart rate (P = 0.10), P wave (P = 0.30), PQ interval (P = 0.68), QRS wave (P = 0.44), QT interval (P = 0.92), and QTc (P = 0.47).

Table 1. The Demographic Charecteristics of Subjects in the Four Groupsa

Table 2. The Results of Paired Sample t-test to Investigate the Changes of Research Variabels in Post-Test to Pre-Test in the Four Groupsa

Table 3. The Results of Two-Way ANOVA Test to Investigate the Effect of Training, Music and Interaction of Training and Music on Research Variables

In the present study, eight weeks of aerobic training did not have a significant effect on P wave, PQ interval, QT interval, and QTc in non-athletic men; however, aerobic training significantly decreased heart rate and increased QRS in non-athletic men. It reported that heart rate variability (HRV) and heart rate improved by exercise and it could be due to cardiac vagal activity (13-15). Decreased HRV and increased heart rate before and during exercise in healthy people can increase cardiac sudden death (16). The findings of the present research are consistent with the results of some reasearches that show no change in the cardiac electrical waves after exercises (17-19). The obvious reaction to HR elevation is the slight shortening of QT intervals and QRS (20). Some studies have reported shortening of QT interval after exercise (20, 21). The study conducted by the American Heart Association in 2011 found that there are significant individual changes in the natural regeneration process after exercise (22). In contast with the results of the present study, Srinath and Sarath (21), showed that isometric exercise significantly decreased QT in obese and normal subjects. Contradictory findings may be related to the type of subjects and different sport protocols in the studies.

In the study of Meher et al. (23), isometric exercise was used, while in the present study the aerobic trainings were used so that the results of the study by Meher et al., is incontrast with the present study (23). It is suggested that most QT variations, due to exercise result from heart rate and less of them are due to other factors (24). Therefore, QT variations are due to variable and difficult exercises. Disturbances in heartbeat may represent a life-threatening arrhythmias and sudden death (25). The effect on the QT interval may result from decreased cardiac vagal activity at the ventricular level due to exercise. In fact, empirical studies have shown that vagal activity has important effects on the development of ventricular arrhythmias. Increasing QTc after exercise can probably indicate the effects of heart rate and changes in the nervous system.

Also, the results of this research showed that eight weeks of listening to music had a significant effect on HR decrease and QRS wave increase in non-athletic men, however, after eight weeks of listening, P wave, PQ interval, QT interval, and QTc did not show any significant changes in non-athletic men. Frances and Billy found that the effect of music was made by coordinating the rhythms of the body with the sound of music; therefore, heart rate and respiratory rate were matched to the music rhythm (26). In the present study, music significantly decreased HR in the subjects, which could be due in part to the effect of music on the nervous system and consequently a decrease in heart rate.

In most scientific texts, the functional response to music is expressed in terms of its rhythm. Interestingly, both types of slow and fast music repressed the implementation of the coordination test. In some studies, music with fast rhythm has been introduced as a trigger for increasing heart rate, blood pressure, sudden skin reactions, and electromyography activity, while music with slow rhythm has been introduced as a trigger for reduction in the mentioned mechanisms (27). Karageorghis et al. (28), reported that music had no significant effect on the heart rate of participants during exercise. Birnbaum et al. (27), reported that listening to fast-paced music caused an increase in cardiac output due to increased contractility of the myocardial muscle and the stroke volume, while heart rate did not show significant changes. The reason for this contradiction can be found in the difference in the participants in the two studies. In general, researches that have examined the effects of music on physiological responses have reported controversial findings that the reason for these contradictions could be related to differences in the type of music, exercise protocol used, and differences in participants (age, gender, physical fitness, etc.) in research. In addition, the findings of this study showed that eight weeks of aerobic training, along with music, had interactive effects on the significant decrease of HR and increase of QRS wave in men, however, eight weeks of aerobic training with music had no interactive effects on P wave, PQ interval, QT interval, and QTc in non-athletic men. The mechanism of musical performance is not well known yet. Music acts through the reticular system, and by affecting the central nervous system relaxes the individual with the distortion of thought, and subsequently the person experiences the reduction of symptoms. According to the results of this study, eight weeks of aerobic training, along with music, have interactive effects on the improvement of heart rate and QRS wave in non-athletic men. However, they have no interactive effects on other cardiac waves of non-athletic men.

The authors of this study express their thanks and gratitude to all the subjects who participated in this research as well as the research deputy of the Islamic Azad University of Marvdasht Branch.

Copyright © 2019, Modern Care Journal. This is an open-access article distributed under the terms of the Creative Commons Attribution-NonCommercial 4.0 International License (http://creativecommons.org/licenses/by-nc/4.0/) which permits copy and redistribute the material just in noncommercial usages, provided the original work is properly cited.
COMMENTS