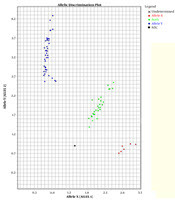 Rheumatoid arthritis (RA) is a common autoimmune disease characterized by inflammation. It mainly affects joints and nearby tissues. Tumor necrosis factor (TNF) is the main role-player in the pathogenesis of RA. It binds to both TNF receptors namely TNF-RI and TNF-RII. Several studies have indicated a relationship between the TNF-RII 196R/R genotype with increased production of cytokines and susceptibility to inflammatory diseases and autoimmune disorders.

Therefore, the present study aimed to investigate the association between TNF-RII polymorphism and RA. It also aimed to study the predictive value of the TNF-RII 196R allele for patients’ susceptibility to RA.

A total of 100 patients and 100 controls were enrolled in the study and their peripheral blood DNA was extracted. Allelic discrimination was performed between case and control groups to investigate the association between the functional TNF-RII 196R polymorphism and RA. Screening analysis for genotyping of TNF-RII functional polymorphism was performed by the TaqMan allelic discrimination assay using real-time PCR.

There was a significant difference between cases and controls in terms of the distribution of TNF-RII genotypes (TT, TG, GG). Correlation analysis showed an association between the G mutant allele and functional 196R polymorphism (CI = 95%, OR = 2.6, P = 0.035).

According to our results, there is a significant correlation between TNF-RII polymorphism and the risk of RA.

Rheumatoid arthritis (RA) is one of the most common autoimmune diseases. So far, no factor has been found to cause this disease. The prevalence of RA is about 1% in the human population worldwide; moreover, it is twice as prevalent in females than in males (1). A 10-year follow-up study from 2004 to 2014 in the United States showed that the prevalence of RA is increasing (2).

Rheumatoid arthritis is known as a complex disorder characterized by the inflammation of the synovium (the thin lining of a joint). Rheumatoid arthritis is a chronic disease in which genetic and environmental factors contribute to decreasing the tolerance to self-antigens (3). TNF-α is an inflammatory cytokine that plays an important role in the development of RA (4, 5). TNF-α initiates and regulates the cytokine cascade during the pathogenesis of RA. TNF-α stimulates monocytes/macrophages, fibroblasts, and endothelial cells to produce IL-l and IL-6 or chemokines (CXCL8, CCL2), which are heavily involved in the pathogenesis of RA including leukocytes infiltration and tissue destruction. Inflammation induced by IL-1 and TNF-α can lead to the increased expression of the matrix metalloproteinase, collagenase, and elastase during the pathogenesis of RA, which is responsible for cartilage degradation and bone resorption (6, 7).

TNF-α affects the target cell via two receptors, TNF-RI (TNFRSF1A) and TNF-RII (TNFRSF1B). Although the homology of the extracellular domains of the TNF-α receptor is very close, their intracellular domains are different (8). TNF binding to TNF-RI triggers apoptosis while its binding to TNF-RII triggers cell survival. Both TNF-RI and TNF-RII are expressed in the synovial tissue in patients with RA (7, 9). The TNF-RI and TNF-RII genes are located on chromosomes 12p13 and 1p36, respectively (10).

Genome-wide association studies have identified that 1p36 locus is associated with RA. Interestingly, TNF-RII is located within this gene area with 10 exons (11). Reports indicate that one of the most important single nucleotide polymorphisms is located in exon 6. This missense mutation results in methionine to arginine substitution (ATG → AGG) at position 196 (196R), which is within the fourth extracellular domain of TNF-RII (12).

Based on the biological and molecular analysis, the TNF-RII gene is considered as one of the best candidates among RA-susceptibility genes. SNP analyses at 196 (rs1061622) indicate that the 196R mutant allele has a different performance than the 196M wild-type allele (13). As reported, there appears to be an association between the exon 6 polymorphism (T676G) and susceptibility to RA (14).

Genetic markers may differ among different populations. These differences may affect the TNF-RII association with RA disease in different populations, leading to contradictory results. Previous studies have reported an association between TNF-RII 196R allele polymorphisms and RA in other populations (15, 16). Therefore, we need to evaluate the genotype and allele frequency in 196 (rs1061622) the TNF-RII gene and investigate the genetic risk of this polymorphism in our population.

In this study, we tried to evaluate the association between single nucleotide polymorphisms (SNPs) of the TNF-RII gene (rs 106 16 22) and the risk of susceptibility to RA in a sample of the Iranian population.

After confirming the protocol of the study by the Ethics Committee of the Semnan University of Medical Sciences (ethical code; 92/372650), the study was conducted in the Department of Immunology at the University. All patients entering the study signed informed consent forms. Blood samples were taken from RA patients and healthy controls and the genomic DNA of all individuals was extracted (Qiagen DNA mini kit, Basel) from peripheral blood cells.

Our case-control study included 100 RA patients. All patients were screened as RA patients according to the American College of Rheumatology criteria. Patients were selected from those who referred to Tehran Baqiyatallah Hospital for RA treatment. The control group consisted of 100 healthy individuals.

Using QIAamp® DNA Mini extracting kit, genomic DNA was extracted from 500 µL of blood lymphocytes; the extracted DNA was stored at -20ºC until use for genotyping.

Thermal cycling conditions were 5 min at 95ºC, followed by 40 cycles of 95ºC for 15 s, and annealing and extension were performed at 60ºC for one minute. After PCR, to measure the allele-specific fluorescence, the genotyping of rs061622 SNPs was performed by TaqMan allelic discrimination with a thermocycler 7900 ABI system (17). Figure 1. TaqMan™ genotyping plot; each sample was analyzed with two probes, one specific for the wild-type and one for the mutation. The strength of fluorescence from each probe was plotted on a graph (wild-type on X-axis, mutant on Y-axis). Each sample is represented by a single point. The samples fall into three clusters representing the possible genotypes: homozygous wild-type (blue), homozygous mutant (red), heterozygous (green).

We used SPSS version 22 software for statistical analyses. The t-test was used to compare the mean age of cases and controls. In addition, Hardy-Weinberg equilibrium (HWE) was investigated in case and control groups of RA. The chi-square test was used to compare genotype frequencies and allele and genotype distributions in patients and controls. The associations between genotypes of the TNF-RII gene and RA were assessed by computing odds ratios (ORs) and 95% confidence intervals (95% CIs) using logistic regression analysis. The significance level was set at P < 0.05.

Our study aimed to investigate the association between the functional 196R polymorphism of TNF-RII and RA. The mean age (± SD) of the participants was 48.3 ± 13.1 years, ranging from 23 to 77 years. The mean age (± SD) of patients was 48.1 ± 12.6 years. Table 1 presents the characteristics of RA patients. The differences between normal and patient groups were not significant in terms of age and sex (P > 0.05, Table 1).

Table 1. Clinical Characteristics of the Patientsa

The results showed that the TNF-RII R allele was present in 32.5% and 26% of RA patients and controls, respectively. The association between the polymorphism and the disease was confirmed by the odd ratio (CI = 95%, OR = 2.6, P = 0.035). Several studies have been conducted in different populations to investigate the relationship between TNF-RII polymorphism and RA disease. The findings of this study are in line with the results of Barton et al. studies, which demonstrated an association between the TNF-RII 196R/R genotype and familial RA in the UK and among French Caucasian populations (14, 15), and Dieude et al. study in the Japanese population (16). However, studies conducted on the Swedish population did not show any significant association between RA and the TNF-RII 196M/R polymorphism (18). It seems that heterozygous patients carrying the TNF-RII 196R allele show RA at an earlier age than earlier age than those carrying homozygous TNF-RII 196M allele. The age of the disease onset is an important factor in the study of RA. The study by Ghelani et al. on RA patients in Southeast Asia did not show any association between TNF-RII 196R/R genotype and RA disease (19).

Several studies investigating the relationship between the TNF-RII 196M/R polymorphism and RA severity have reported controversial results (19-21). van der Helm-van Mil et al. (22) and Glossop et al. (20) studies did not show any significant association between the severity of RA disease and 196R allele (19, 20). However, Goeb et al. study revealed a significant correlation between TNF-RII 196R allele and radiographic severity and diagnosis of RA (21, 23).

Previous studies have shown that the TNF-RII 196 M/R gene tends to characterize increased cytokine production and apoptosis after TNF-α stimulation (13, 24). Studies by Horiuchi et al. showed that a polymorphism in codon 196 exon 6 TNF-RII changes methionine to arginine which increases IL-6 production.in the cells carrying the 196R allele (13). Till et al. showed that the change of methionine to arginine changes the pathway for TNF-RII apoptosis that is performed by NF-kb signaling (24).

In conclusion, we investigated the association between TNF-RII gene (rs1061622) polymorphisms and RA in a sample of the Iranian population for the first time. Our results supported a significant association between the missense mutation, which involves a single base substitution at codon 196 (ATG → AGG) in exon 6 of the TNF-RII gene, and susceptibility to RA.