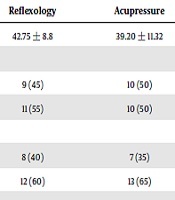 Comparing the Effect of Acupressure and Foot Reflexology on Anxiety and Depression in Hemodialysis Patients: A Clinical Trial

Depression and anxiety are common problems with multiple complications in hemodialysis patients.

This study aimed to compare the effect of acupressure and reflexology on anxiety and depression in hemodialysis patients.

The results demonstrated that acupressure and reflexology could have positive impacts on mitigating the patients’ depression and anxiety. Thanks to the ease of application, these methods can be used by nurses to reduce anxiety and depression in patients undergoing hemodialysis.

End-stage renal disease (ESRD) is a chronic form of kidney disease marked by an irreversible reduction in renal function, which leads to death in the absence of dialysis or renal transplantation (1, 2). The most common treatment for ESRD patients is hemodialysis (3). It affects various aspects of the patient’s lives, including fluid and dietary restrictions, increased hospitalization, financial problems, and sexual disorders, all of which could heighten the incidence and prevalence of mental disorders (4).

Anxiety and depression are among the most common psychiatric disorders in these patients, with a prevalence of 46.6% - 92.5% and 31.5% - 88%, respectively (5-7). The main stressful factors for ESRD include inserting hemodialysis needles by novice nurses, hemodialysis machine alarms during dialysis, and frequent referrals for hemodialysis (8). Anxiety and depression could deteriorate self-care, self-efficacy, health, and quality of life and increase the risk of resorting to alcohol and drugs in these individuals (9). Drug therapy for anxiety and depression should be considered the last option because of severe complications such as dependency (10). In this regard, the most commonly used non-pharmacological methods are associated with complementary and alternative medicine (CAM) (11).

Complementary and alternative medicine refers to a wide array of medical and health care systems, practices, and products that are commonly distinguished from conventional medicine (12). The CAM is divided into five classes, including alternative medical systems, mind-body interventions, manipulative and body-based practices, biologically based interventions (natural products), and energy/metaphysical therapies. Manipulative and body-based therapies are currently one of the main branches of complementary medicine (13, 14). Acupressure and reflexology are among the most commonly used methods in CAM; they are regarded as body-based manipulation therapies and are of high popularity among people (15).

Acupressure is one of the most widespread treatments used to improve the mental state of patients. It originates in traditional Chinese medicine, in which acupuncture points are stimulated by fingers. Acupressure can reduce anxiety and depression in patients undergoing hemodialysis by adjusting the concentration of neurotransmitters, lowering the concentrations of adrenocorticotropic hormones and hydroxytryptamine-5 in the neural pathways, and improving relaxation (5, 7, 16). Several studies have observed that acupressure point P6 can mitigate the anxiety and depression of hemodialysis patients and other patients. This point is located on the inner forearm, three finger breadths below the wrist between the two tendons (4, 17, 18).

Reflexology is another popular instance of CAM, which is based on applying pressure to specific reflex points of the hands and feet, corresponding to the specific areas of the body. It has been reported that massaging these points can enhance the blood supply to related organs (19, 20). Reflexology has also been shown to reduce anxiety, pain, and fatigue (21-23).

The purpose of this study was to compare the effect of acupressure and reflexology on anxiety and depression in hemodialysis patients.

This clinical trial was approved by the Vice-President of Research Information Technology and the Ethics Committee of Zabol University of Medical Sciences (Id: zbmu.1.REC.1396.184) and it complied with EMEA guidelines (24).

The study was performed on 60 patients (from 120 patients) who had been admitted between January and March 2017 to the Special Patients Clinic, Zabol, the southeast of Iran. Using Cho’s study (18), the sample size was estimated at 20 for each group within a 99% confidence level and statistical power of 95%. Patients were randomized into three groups, including acupressure (n = 20), reflexology (n = 20), and control (n = 20). The inclusion criteria were no stressful event in the past year (e.g. death of a close relative), no severe depression and anxiety, a minimum age of 18 years, minimum hemodialysis duration of six months, and undergoing dialysis three times a week (each lasting for four hours). The exclusion criteria, on the other hand, were amputations at the place of acupressure and foot reflexology, unwillingness to participate, lupus and chronic physical and psychological illnesses such as cancer, and having taken sedative drugs like benzodiazepines at least one month before the intervention. All qualified patients were informed of the purpose of the study and their consent was obtained. At the time of patients’ admission, after checking the medical history and performing required examinations, the researcher invited the willing eligible subjects to participate in the study. Sampling continued until the target sample size reached. To prevent the two groups from any contact that might lead patients to know about their respective types of intervention, the sampling days were divided into two sets using a random number table. Thus, reflexology was scheduled for even days and acupressure was planned on odd days. Once sampling was completed for the intervention groups, it was carried out for the control group.

Data collection consisted of three parts. The first part included a demographic questionnaire (age, gender, marital status, education level, employment status, number of dialysis sessions per week, and the primary cause of hemodialysis). The second part included the Spielberger State-Trait anxiety inventory (STAI). This 40-item questionnaire is scored between 20 and 80. Spielberger et al. (25) reported the Cronbach’s alpha for the anxiety subscale to be 0.92. The validity and reliability of this tool have been confirmed in many studies (5, 7, 8). Also, the test-retest coefficient for the anxiety subscale was 0.62 (26). Finally, the third part was the Beck depression inventory-II (BDI-II). This questionnaire has 21 items, each graded from 0 to 3. The scores obtained are interpreted as follows: scores 0 - 13 indicate no or minimum depression, scores 14 - 19 represent mild depression, scores 20 - 28 suggest moderate depression, and scores 29 - 63 show severe depression. The convergent validity of BDI-II with the Hamilton depression rating scale (HDRS) was found to be 0.71. The test-retest reliability of this questionnaire was positively reported after one week (0.93) (27).

The subjects were provided with necessary explanations about the intervention and its harmlessness; they were assured of the confidentiality of their information; then, their informed written consent was obtained. For those in the acupressure group, point P6 was used for the intervention.

This point is between the bones of the forearm in the width of three fingers above the wrist. After STAI and BDI-II were filled out, the research subjects were studied. One hour after starting dialysis, three days a week for four weeks, acupressure was performed rotationally (two rounds a second) at a pressure of 3 - 4 kg for eight minutes (28). The correctness of the pressure was confirmed when the person felt warm, swollen, and heavy (11). In the reflexology group, one hour after starting dialysis, the patient was put in the supine position; then, the thumb was pushed directly on the solar network point for 10 min for each foot. For four weeks, this was carried out rotationally, at a pressure of 3 - 4 kg, and three times a week (23). To prevent hypotension during the massage, patients were asked to lie down on the left side. It should be noted that both interventions were performed by two nurses (authors) under the supervision of a CAM specialist. Four weeks after both interventions, the questionnaires were completed by the patients for the second time.

Patients in the control group received no intervention apart from their routine treatment. They yet filled out the questionnaires before and after the program. The collected data were analyzed in SPSS 19 using ANOVA, paired t-test, and post hoc test at a significance level of 0.05.

The mean age of the patients in the reflexology, acupressure, and control groups was 42.75, 39.20, and 40.85, respectively. The results of the independent t-test indicated no significant difference between the three groups in terms of demographic characteristics (P = 0.465) (Table 1).

Table 1. Comparison of Demographic Characteristics of Patients in the Reflexology, Acupressure, and Control Groupsa

Table 2. Comparison of Mean ± SD of Depression Before and After the Intervention in the Three Study Groups

Table 3. Comparison of Mean ± SD of Anxiety Before and After the Intervention in the Three Study Groups

The results of this study showed that acupressure and reflexology exert a positive effect on alleviating depression and anxiety of hemodialysis patients.

In a clinical trial, Hmwe et al. (16) conducted a study to determine the effect of acupressure on depression, anxiety, and stress in hemodialysis patients. For three weeks, acupressure was administered three times a week (each lasting 15 min). The results showed that the intervention reduced anxiety, depression, and stress in these patients. The results of this study, consistent with the present research, confirm the impact of acupressure on lowering anxiety and depression in hemodialysis patients. While the duration of the intervention and the population of this study are similar to those of the present research, the acupressure points and their methods of administration differ in the two studies.

In the same vein, Tse and Au (29) reported the effect of acupressure on improving the depression of patients with chronic back pain and they recommended it as a non-invasive method for relieving depression among nurses at home. Moradi et al. (30) verified the effect of acupressure twice weekly for four weeks in reducing the anxiety of patients undergoing hemodialysis.

Conversely, in a study on students, the impact of acupressure on anxiety reduction was not confirmed (31), which is not consistent with the results of the present study. This variation in the results could be related to varying environmental conditions, causes of referral, and urgency of patients’ conditions in each study. Also, in another study, acupressure at point P6 did not significantly affect the anxiety of patients with primary dysmenorrhea (32). This is probably due to dissimilarities in intervention implementation and duration, environmental factors, and variations in statistical populations.

In a study in Italy, Quattrin et al. showed that foot reflexology could significantly reduce the anxiety of patients admitted to the oncology ward (36). Other studies have also confirmed the impact of reflexology on anxiety and depression in patients (37, 38). The results of some of the above studies are in line with the present research and confirm the effect of reflexology on reducing anxiety and depression in different patients. Meanwhile, the research population, duration, and method of intervention in the above studies are different from those of the present study. There are also many studies confirming the positive effects of reflexology and acupressure on other complications such as pain and constipation (39-41).

In acupressure of various energy pathways, pressure points are stimulated through massages and correction of the energy flow, which triggers an appropriate response in various organs and glands of the body. This procedure stimulates the secretion of neurotransmitters and adrenocorticotropic hormones and endorphin-mediated mechanisms, thereby reducing anxiety and depression (39). Reflexology has so far been explained with reference to the gate control theory of pain, nerve impulse theory, increased secretion of endorphins and enkephalins, improved blood flow, and lymphatic flow (42).

The results of this study established the beneficial effect of reflexology and acupressure on depression and anxiety in hemodialysis patients. Given their low cost and easy implementation, it is recommended that nurses utilize them for patients undergoing hemodialysis.

This article is derived from a student project. The authors express their gratitude to all officials of Zabol University of Medical Sciences, the staff of Imam Khomeini Hospital, and all participants and their families who helped accomplish this project.

Copyright © 2020, Medical - Surgical Nursing Journal. This is an open-access article distributed under the terms of the Creative Commons Attribution-NonCommercial 4.0 International License (http://creativecommons.org/licenses/by-nc/4.0/) which permits copy and redistribute the material just in noncommercial usages, provided the original work is properly cited.
download pdf 121.08 KB Get Permission (article level) Import into EndNote Import into BibTex
Number of Comments: 0