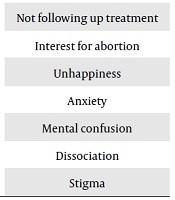 Explaining Consequences of Parents Having Child with Thalassemia: Qualitative Study

Thalassemia can affect different aspects of life the same as any other chronic disease. Despite therapeutic measures of thalassemia, the patient and families encounter several physical and psychological problems. Having a child with thalassemia can disrupts the family mental balance.

The purpose of this study is to explain the consequences of parents who have children with thalassemia.

Inductive qualitative approach was applied in 2017 - 2018 in Hajar Hospital. Semi-structured interviews were conducted for data collection. Qualitative conventional content analysis was employed for data analysis. 10 five mothers, one grandmother, and two fathers and nurses participated in this study.

The three specified categories were as follows: (1) Non-acceptance of disease: disbelief, not following up treatment, and interest for abortion, (2) parent psychological reactions: unhappiness, anxiety, and mental confusion, (3) Isolation: dissociation and stigma.

Parents who had children with thalassemia experienced several psychological problems. The consultative and supportive services of the health system were necessary for these parents. Also, it was urgent that the health authorities establish consulting clinics for chronic diseases to provide them the required consulting services.

Thalassemia is a hereditary blood disease that requires specific medical treatment (1). It is estimated that 1.5% of the world population is beta thalassemia carriers (2). Highly widespread in Iran, thalassemia is considered as endemic disease (3).

The families of the thalassemia patients face a variety of tensions which can have negative effects on their life (8). These tensions include disappointment, insecurity, anxiety, depression, school worries, employment and treatment problems, welfare issues, culture, family, and economic difficulties. Thus, effective care is necessary for both the patient and the family (7).

Given the lack of attention to the patients’ family, Yarbro and Wuycik (2011) believe that the healthcare team records the patient’s problems using the forms that are available at the wards; therefore, they do not pay any attention to the patient’s family due to the lack of time. This problem becomes even worse when it is not even obvious who is responsible for helping members of the family. Yarbro and Wuycik further posit that family plays an important role in the patient’s adaptation with disease and they should be considered as a helping factor in treatment (9). In 2006 Hosseini et al. showed that the repetitive and long therapeutic diets have caused several social problems for physicians and patients and their families who are exposed to all kinds of behavioral, social and emotional problems (10). Therefore family-centered care is a practical approach considered by the health care team (11). The goal of nursing care for patients and families with chronic diseases during hospitalization is to improve the patients’ performance levels, reduce the negative effects of the disease, and prevent disease-related complications (12).

According to the studies, it can be concluded that thalassemia causes too many social and mental problems for the families. However, the qualitative study can foster more awareness in the parents who have thalassemia children in Iran. It can also increase the healthcare team’s awareness of the role of the family.

The purpose of this study is to explain the consequences of parents having child with thalassemia in Hajar Hospital affiliated to Shahrekord Medical University.

Content analysis can display a flexible, pragmatic method to establish and continue the knowledge and the human experience of health and illness (13). The method applied in this study was the inductive content analysis. The study was conducted in Hajar Hospital in 2017 - 2018 approved by the Shahrekord University of Medical Sciences under the code of IR.SKUMS.REC.1394.41. The main methods for data collection included the deep, semi-structured, face to face and individual interviews. Some of the interview questions included: Can you talk about the time when your child was inflicted with thalassemia? What were your problems after diagnosis? The interview continued by asking explorative questions, such as: Is there any other issued required to be mentioned? Can you explain more in this regard? The time for the interview was 20 - 40 mins. It should be mentioned that the place for the interview was selected in accordance with the participants’ comfort in the personnel room. Data collection lasted for 4 months. Purposeful sampling was used and continued selecting participants until data saturation was obtained.

10 participants, including 5 mothers, 1 grandmother, 2 fathers and nurses participated in this study. Parents with children with thalassemia and the definite diagnosis of thalassemia were included in the study; those who were not interested in cooperating were excluded from the study. Participants included parents not having specific diseases such as depression-chronic diseases for which they were under treatment- which can lead to specific needs and the parents should clearly state these issue. The exclusion criteria included a reluctance to continue participating in the research. Qualitative conventional content analysis was used for data analysis (13). After signing the consent form, the parents were interviewed. The data analysis started with recurrent reading and finding an overview. Then, the texts were read between the lines for code extraction. After extracting concepts and codes, important paragraphs and sentences were classified based on the similarities and differences. Finally, the subcategories were combined with a few categories based on their relations (Table 1).

To increase credibility, in-depth interviews were done several times. to increase transferability, the results of the research were presented to a number of people having similar characteristics to the participants in order to give your comments about the similarity between the study results and their experiences. To increase conformability, some of interview transcriptions, codes and categories were given to faculty members. Then, they were asked to check the rigorous of the data coding process. After finishing the interview, the conceptual codes were reviewed with participants to check their credibility. The confidentiality and anonymity of participants as well as moral considerations were all taken into account.

This category was determined with three subcategories: disbelief, not following up treatment, and interest for abortion. Most parents stated that at first they did not believe the child with thalassemia; they even attempted to abort him, although they were more than six months pregnant. One mother said: “We didn’t believe he has thalassemia even after one year. They didn’t even issue him an insurance booklet and every time I begged them to do s.th. The personnel told us that our child has a problem, but I couldn’t believe it. It took one year to get used to and accept that my child is sick.” (mother 4)

“At first it was very difficult for me, but I could get along with it. When we married, I didn’t want to have a child. When I realized I was already pregnant for six months, it was too late. We went to forensic for abortion but they didn’t accept. They said that they did not have the right to kill babies, it is unlawful.” (m 2)

A nurse stated that:

“At first, most parents don’t believe in their child’s disease. They think it’s an acute disease which doesn’t need follow-up. However, they generally realize the chronic nature of the disease.” (nurse 1)

Category of parent psychological reactions was obtained with three subcategories of unhappiness, anxiety and mental confusion.

Most parents stated that they experienced several psychological reactions after realizing that their child was inflicted with thalassemia. In this regard, a mother said:

“I am worried; I’m always scared that something may happen to my child. When I ask other mothers, they say that we are all the same, we are depressed we cannot control the bad thoughts ...” (m 2)

“Since I heard my child has thalassemia, I have suffered from psychological problems. It’s more difficult for parents. Taking blood from a child really upsets me.

“It’s very difficult when they take blood from our child before us because they should be under supervision. But it’s more difficult for me as I am a father and I can’t see my child suffering …” (f 2)

Data analysis specified the category of isolation with two subcategories of dissociation and stigma.

Most parents stated that thalassemia means illness of all family members. They also become isolated by having a child with thalassemia. In this regard a mother said:

“My child is in another village and he comes home at night. It is difficult to take a taxi. We both suffer. After taking blood, I take him home until he feels better. If he was healthy, he didn’t need me. They need help a lot. I should forget myself and help them anyway …” (m 5)

“Well, it affects parents’ spirit a lot. For example, they say that the child is sick, those with thalassemia are sensitive. Some people stop associating with others. They don’t go to the wedding party because of their child’s appearance.” (m 3)

“I have several years of experience. Many mothers are ashamed of their child’s illness and even they feel ashamed that they even hide the child’s illness from a very close family.” (n 1)

According to data analysis, non-acceptance of a child’s disease was obtained: The results of this study revealed that at first parents did not believe their children’s disease and experienced several psychological reactions. Wong indicated that parents were reluctant to have a child with thalassemia (14). Our study showed that some parents especially those who were both thalassemia major were willing to abort their child, whereas, findings of other studies were in conflict with this finding. A researcher stated that parents of children with thalassemia did not want to abort their children. Accepting abortion was highly dependent on race and religious backgrounds (15).

The parents’ psychological reactions were obtained based on data analysis. The results of one study revealed that parents of a child with experience psychological distress (16). Also, according to the finding of Aziz et al. (2012), the chronic nature of thalassemia and the threatening life of children throughout life make the family worried and increase the psychological disorders. Thalassemia begins from infancy and has several mental effects on parents. Lack of training causes numerous social problems for parents (17). Mazzone and et al. stated that family having a child with thalassemia have numerous problems (18). Findings of Gallo et al. showed that nurses and healthcare staff should let the parents express their concerns. They should apply the required strategies and resources for supporting parents and families (19). Another study showed families with major thalassemia patients tolerate a high level of caregiver burden (20).

Isolation was achieved from data collection. The results of our study revealed that parents with thalassemia children feel isolated. Other studies also confirmed these findings. Fernandes et al. stated that diseases such as epilepsy can bring out stigma for patients and those around him (21). Another study said thalassemia caused a significant impact on the patient and the relatives’ life (22). According to Raman et al. in 2019, parents with thalassemia children need psychological support during the treatment (23). Cipolletta et al. stated the family-focused approach should be applied while dealing with chronic patients (24).

The results of the present study revealed that the parents who have a child thalassemia experience several psychological problems; so they needs to benefit from consultative and supportive services of the health system. Therefore, it is necessary that the health system and healthcare staff be aware of consequences ahead of the parents with thalassemia and take vital actions to support them. It is also essential that health authorities establish consulting clinics for chronic diseases and provide them with necessary consulting services.

This study was approved by Shahrekord University of Medical Sciences, Department of Nursing and Midwifery (No. 1940). We appreciate all the participants who shared their experiences with us.

Copyright © 2020, Medical - Surgical Nursing Journal. This is an open-access article distributed under the terms of the Creative Commons Attribution-NonCommercial 4.0 International License (http://creativecommons.org/licenses/by-nc/4.0/) which permits copy and redistribute the material just in noncommercial usages, provided the original work is properly cited.
download pdf 104.54 KB Get Permission (article level) Import into EndNote Import into BibTex
Number of Comments: 0