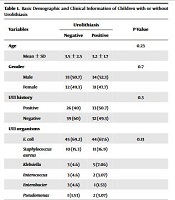 Vesicourethral reflux (VUR) is a common urinary tract disorder in children, which may be associated with urolithiasis.

The current study aimed to investigate vesicoureteral reflux in children with and without urolithiasis.

In this case-control study, 130 children younger than 10 years, with a confirmed diagnosis of urinary tract infection (UTI) are investigated. The demographic information and clinical status of all participants were recorded. Ultrasonography was performed for all children, and they were divided into two groups of 65 subjects based on the results: group 1, children with UTI+stone; and group 2, children with UTI+ non-stone. All children received Voiding Cystourethrogram to evaluate Vesicourethral reflux.

Vesicoureteral reflux (VUR) as abnormal return of urine from the bladder to the ureter or kidneys is one of the most common urinary tract disorders in children. There is evidence which indicates that VUR may be genetic in origin, as 30% of brothers and sisters of children with VUR have similar conditions with different degrees (1). The most common type of VUR causes by congenital insufficiency of the ureteral bladder. Reflux can lead to urinary tract infections (UTIs), which in turn can damage the kidneys, glomerulonephritis, and reflux nephropathy (2-4).

Also, a series of environmental and genetic factors contribute to urolithiasis. It’s less common in children so that its incidence ranges from 2 to 2.7%; however, it causes more severe complications in children. According to the evidence, metabolic disorders and genitourinary anomalies are involved in the formation of urolithiasis, especially in younger children (5).

Based on the previous studies, several anatomical abnormalities such as UPJO (Uretero Pelvic Junction Obstruction), urethrocele, VUR, tubular ectasia (modular spongy kidney), and horseshoe kidney can play a key role in the formation of urolithiasis (6, 7). The evidence also indicates an association between congenital anatomical abnormalities and urolithiasis; however, the exact etiology of the disease is not identified yet.

The current study aimed to compare the frequency of VUR in children with and without urolithiasis.

The current case-control study is conducted on patients with UTI and urolithiasis referred to the pediatrics clinic of Amir-Kabir hospital in the city of Arak.

Inclusion criteria: (1) Children younger than 10 years of age; (2) Parents’ willingness for their baby to participate.

Exclusion Criteria: (1) Not willing to continue the study; (2) Having a history of urolithiasis for those in the control group; (3) The presence of any congenital anomaly in the kidney or urinary tract.

In this case-control study, 130 children younger than 10 years, with a confirmed diagnosis of urinary tract infection (UTI) are investigated. The children were enrolled based on the inclusion and exclusion criteria. After obtaining parental written informed consent, the demographic data and clinical information were collected using checklists (e.g. age, gender, drug resistance resident of town or village), and history and type of UTI. Kidney and urinary ultrasound were performed for all children. Ultrasonography was performed for all children, and they were divided into two groups of 65 subjects based on the results: group 1, children with UTI+stone; and group 2, children with UTI+ non-stone. All children received Voiding Cystourethrogram to evaluate VUR.

The ethical considerations were observed, such as obtaining written informed consent to participate in the study, ensuring the participants about the confidentiality of the results, and patients were informed that they can stop participating in the study at any time. The study is also approved by the Ethics Committee of the Arak University of Medical Sciences (ethical code: IR.ARAKMU.REC.2059.173.12).

The data were analyzed using SPSS software. Descriptive statistical methods were used to determine the frequency of descriptive variables. Also, the Student’s t-test was used to analyze the quantitative variables. Statistical significance was considered when P-value < 0.05.

Table 1. Basic Demographic and Clinical Information of Children with or without Urolithiasis
Table 2. Urolithiasis Condition in Patients with Vesicoureteral Reflux

aP-value, based on Spearman Analyze.

In the present study, we evaluated urinary bladder reflux in two groups of children with or without urolithiasis and, based on the findings, 33 children (25.4%) were positive for VUR (21 patients (32.3%) in the case group and 12 patients (18.5%) in the control group), so the difference between the two groups was statistically significant (P = 0.011). However, in other studies, the exact association between urolithiasis and congenital malformations is not fully understood, in the following, a series of related studies are described.