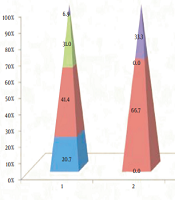 Renal stone disease is a very common disease, and its lifetime prevalence is 1 - 15%, with a gradual rise in incidence and disease prevalence. There are significant financial implications of its management. Nowadays, for big (typically > 2 cm) renal and upper ureteric stones, PCNL is widely regarded as the first-line treatment. Because most of the intrarenal collecting systems can be accessed by superior calyceal puncture in PCNL, good stone clearance can be achieved. The “Guy’s Stone Score” is a useful technique for categorizing the complexity of PCNL.

This study aimed to evaluate the role of Guys Stone Score based on KUB and intravenous urography to predict the success rate, grading, and complexity of PCNL, which are performed via the upper pole access.

The present prospective, non-randomized observational study was undertaken in the Department of Urology and Renal transplantation, SCBMCH, Cuttack, from 1st November 2017 to 31st October 2019. A total of 104 patients were enrolled in the study in whom PCNL was performed through superior calyceal puncture, based on preoperative intravenous pyelogram. The Guy's Stone Score was calculated, and the complexity of the procedure was graded using radiological studies, then the outcome was determined accordingly.

The present study shows that an intravenous pyelogram-based Guy’s Stone Score (GSS) is an easy-to-use tool in predicting the early success rate and potential difficulties and complications in PCNL performed through superior calyceal puncture.

The estimated lifetime prevalence of kidney stone disease is 1 - 15% and varies by the age of life, gender, race, and geographic area (1). Its current treatment options apart from open surgery include percutaneous nephrolithotomy (PCNL), retrograde intra-renal surgery (RIRS), and extracorporeal shock wave lithotripsy (ESWL) (2, 3). Nowadays, for big (typically > 2 cm) renal and upper ureteric stones, PCNL is widely regarded as first-line treatment (4). Success rate and complication rate are assessment parameters of PCNL outcome. The definition of success in PCNL is lack of any residual stone fragments on X-ray or/and computed tomography (CT) or observation of residual fragments (CIRF) that are not clinically significant. The CIRF is an asymptomatic, non-infectious, non-obstructive residual fragment of less than four mm (5).

Because most of the intrarenal collecting systems can be accessed by superior calyceal puncture in PCNL, good stone clearance can be achieved (6). Nowadays, for post-PCNL complications and success prediction, various scoring tools are used, such as Guy’s Stone Scoring (GSS) system (7), STONE nephrolithometry scoring system (8), and CROES (Clinical Research Office of Endourological Society) nomogram (9). In this regard, GSS can be assigned by calculation based on simple X-ray, IVP, and CT scan. Although CT scan provides more accurate details, it is expensive that is associated with higher radiation exposure, and also is not widely available in developing countries. Plain X-ray KUB and IVP are cheap and commonly done in developing countries (4, 10).

This study is a single institution-based prospective study, which aimed to focus on the association of an intravenous pyelogram (IVP) based GSS with post-superior calyceal puncture PCNL success rates and complications.

This prospective, observational and non-randomized study was done on 104 patients from 1st November 2017 to 31st October 2019. All patients with renal stone who underwent PCNL by upper calyceal access were included in the study. All other patients who were not suitable for operation (Un-controlled blood disorders, high heart/lung risk, sepsis), patients who underwent inferior and middle calyceal access, abnormal renal anatomy, and pediatric patients, were excluded from the study. All included patients were properly evaluated and assigned by Guy’s Stone Score based on IVP. The PCNL was done in prone position with Upper Calyceal Puncture with 18G IP needle under CARM fluoroscopy. Various preoperative and postoperative parameters (age, gender, BMI, comorbidity, history of previous surgery, stone size, stone location, stone laterality, Guy’s stone score, type of puncture, number of tracts, duration of surgery, any intra-operative events, residual fragments, change in hemoglobin and blood transfusion, change in renal parameters, complications according to Clavien-dindo grading, hospital stay, any ancillary procedure, readmission, immediate success) recorded and graded according to GSS.

Possible pulmonary complications were evaluated by postoperative chest radiographs in recovery room. Postoperative X-ray KUB radiographs were also obtained in all cases and re-look PCNL, or any further procedure was decided based on that. Patients were usually discharged after 48 h with DJ stent in situ in uncomplicated cases. The DJ stents were removed after three weeks. The patients were followed up at three weeks for DJ stent removal if DJ stent was placed and then at six weeks with X-ray KUB.

All data were entered into a proforma created specifically for the study. Microsoft excel 2013 was used to store the information gathered. The data from 104 patients were examined, coded, and entered into IBM SPSS 24 for statistical analysis. The Chi-square test was used, as well as one-way analysis of variance (ANOVA) as a significance test for outcome analysis. A p-value of less than 0.05 was considered statistically significant. 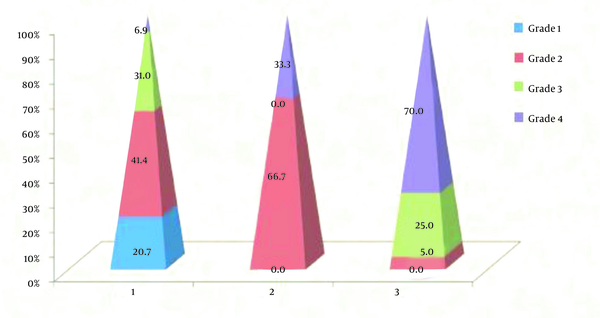 Renal stone diseases are one of the major problems of patients presented to urology clinics, which affect about 12% of the world population at some stages in their lifetime (11). The PCNL varies in its complexity, and several preoperative nomograms have been used for the prediction of success rates and correlation with the complication rates with technical difficulty at present era. Thomas et al. (7) developed Guy's score using intravenous pyelogram findings to classify the patients. In the study by Singh et al. (12), the success rate for the management of complicated renal calculi was shown to be higher in the upper calyceal puncture group than in the lower calyceal puncture group. In the present study, patients had a mean age of 41.6 ± 12.0, which is comparable to the study by Kumar et al. (13), where the mean age of the patients was 40.8 ± 8.72 years. Thomas et al. (7) observed that the mean age was 51.7± 16.4 and in Khalil et al.’s study was 47.38 ± 14.6 years (14). Slightly lower mean age in the present study than aforementioned studies may be due to larger number of patients of younger age group presented in the hospital who are usually earning members of the family.

In Lojanapiwat et al.’s study (4), the number of previous open renal surgery did not affect outcome significantly (P = 0.79); however, Hu et al. (15) found that there were higher dip in hemoglobin, more need for renal angiographic embolization and secondary management, more operative duration and less early calculus free rate in patients who had a previous history of an open renal surgery. After surgery, there is retroperitoneal peri-renal scar, which may also involve in collecting system, thereby causing pelvicalyceal distortion and infundibular stenosis. This altered anatomy may affect stone formation and grade of GSS.

Although most intrarenal collecting systems can be accessed by superior calyceal puncture, it has a greater risk of pulmonary complications (16). Yan et al. (16) observed that supra-costal puncture was not associated with increased intrathoracic complication or morbidity if done by an experienced surgeon.

After the introduction of ESWL and the development of endourological interventions, residual calculi which, were small in diameter can be manageable, but insignificance of CIRF is questionable because small stones may become significant and result in infection and pain. In a study by Ganpule et al., (17) residual fragments were identified in 7.57% of the patients.

In the study by de Souza Melo et al. (18) total complication rate was

14.3%, and most common complication was bleeding with transfusion rate of 4.8%. Hematuria during PCNL depends on stone size, location, number of access tracts, attempts with multiple punctures, supra-pole puncture, lesser trained surgeon, single kidney, and staghorn stone. Occasionally neighboring organs like gut, vessels, liver, and spleen can be injured. Pneumothorax can be developed due to close proximity of superior renal pole with thorax. This may require chest tube placement temporarily to drain air and fluid in case of pneumothorax or hemothorax.

In many studies, GSS one had minimum complications (18.9%), whereas GSS 4 had the highest (61.5%), but it is in discussion forum to establish a positive correlation of complications with GSS grade. It was observed by Jiang et al. (19) that one scoring system was Guy stone score to predict complications after PCNL.

Readmission is hospitalization within 30 days of a discharge from the same or different hospital with the same well-being issue. In PCNL, uncontrolled pain, infection/sepsis, hematuria, urinary retention, and DJ stent displacement are usual causes of readmission. Readmission after PCNL were more associated with higher level of GSS (P = 0.001). Keskin et al. (20) found that total readmission of 27.1% in which hematuria was seen in 2.2%, sepsis 9.6%, and DJ stent replacement in 3.9%. Free bed in government hospital is also one reason for frequent readmission.

The “Guy’s Stone Score” is a useful technique for categorizing the complexity of PCNL. It is based on plain x-ray KUB, and x-ray intravenous urography is cheap, which is a useful investigation in low-income countries. It also has lower radiation hazards than computerized tomogram scan. This study confirmed that intravenous urography-based Guy’s Stone Score (GSS) is an easy tool to predict the early success rate and potential difficulties and complications in PCNL performed through superior calyceal puncture.

This study has some limitations as follows: it is a single institute-based observational study, small sample, only upper pole access PCNL, more than one surgeon operated the patients, no recruitment of kidney anomalies. No comparison was made with other nephrolithometry scores because they were based on computerized tomogram scans. Further study is required to overcome these limitations.