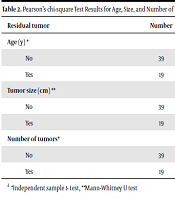 Comparison of Re-TUR Results in Primary Patients with Non-muscle-Invasive Bladder Cancer (NMIBC) of Low, Intermediate, and High-risk for Recurrence Based on the EORTC Scoring System

Bladder cancer is the second most common urologic malignancy. Transurethral resection (TUR) is the standard initial treatment for non-muscle-invasive bladder cancer (NMIBC). The high prevalence of residual tumor in some patients has necessitated repeat TUR (re-TUR). Previous studies have shown the quality of primary resection to impact re-TUR outcomes, but the role of tumor biology remains unclear.

This study aimed to evaluate the impact of tumor biology on re-TUR results in primary (non-recurrent) patients with superficial bladder tumors.

We studied a cohort of consecutive primary patients with superficial bladder cancer undergoing resection and routine re-TUR between March 2018 and February 2019 at our unit. Patients with TaG1 or T2 on primary pathologic report, deliberately incomplete initial resection, or absence of detrusor muscle on the initial specimen were excluded from the study. Re-TUR was performed in the sixth week. All procedures were performed by the same surgeon. The patients were divided into three groups according to the European Organization for Research and Treatment of Cancer (EORTC) risk scoring system and compared for recurrence of NMIBC.

Despite the modest study size, our results suggest that tumor biology might have an impact on residual tumor characteristics, and the EORTC scoring system may help to predict the risk of progression and residual tumor rate on re-TUR.

Bladder cancer is the 11th most commonly diagnosed cancer worldwide (1). Transurethral resection (TUR) is the gold standard modality for surgical excision, pathologic staging, and initial management of superficial (stage Ta and T1) non-muscle-invasive bladder carcinomas (NMIBC), the most common type of urothelial malignancies of the bladder (2).

Resection should be performed with adequate depth of sampling to obtain muscle, and all the visible tumor must be completely removed (3). Nevertheless, an alarmingly high risk for finding residual tumor and under staging remains even after seemingly adequate initial TUR (2-6).

Several investigators have convincingly shown that the quality of the initial TUR impacts residual tumor rate at the second resection (2, 3, 5-7). Yet, whether primary tumor biology impacts the results of initial and re-TUR of untreated NMIBC remains open to debate.

In 2006, the European Organization for Research and Treatment of Cancer (EORTC) created a scoring system and risk tables to predict the risk of recurrence and progression of superficial bladder tumors (Ta T1 and Carcinoma in situ or CIS) (8).

Perioperative data on all primary (non-recurrent) patients with the fresh clinical diagnosis of NMIBC who underwent TUR at our center by a single surgeon (FKM) between March 2018 and February 2019 were collected. The patients generally received a single bladder instillation of Mitomycin C within 6 hours after the initial TUR.

Histopathologic evaluation was done by a single experienced uropathologist (MA). Patients with TaG1 or T2 as the primary diagnosis, deliberately incomplete (electively staged) resection, or absence of muscle on the initial specimen were excluded from the study. The subjects were classified into low-, intermediate-, and high-risk groups according to the EORTC scoring system for predicting recurrence of NMIBC. scoring zero, hence needless of re-TUR, were excluded from the study.

Re-TUR was performed by the same surgeon six weeks after the initial procedure. The interval of six weeks between the initial TUR and the second procedure was chosen to assess the likelihood of new tumor growth. Patients with intermediate or high risk tumors (according to the European Association of Urology (EAU) guidelines for stratification of NMIBC) received intravesical Bacillus Calmette-Guerin (BCG) immunotherapy three weeks after the second TUR (1).

Residual tumor rate and tumor progression among low-, intermediate-, and high-risk groups were analyzed to assess the impact of tumor biology on the outcome of re-TUR. Pearson’s chi-square test was used to compare the residual tumor rate among study groups. Mann-Whitney U test and t-test were used respective to other variables and their distribution, and the impact of each factor on the residual tumor rate was subjected to logistic regression. All statistical analysis was performed using SPSS software version 26. The threshold for statistical significance was P < 0.05.

Out of 220 consecutive patients treated for primary NMIBC in the study period, 61 patients met the inclusion criteria. Then, three more cases were excluded since they either refused a second surgery or failed to show up for re-TUR. The remaining 58 cases were analyzed. The mean age of subjects was 62.1 years (range 38 - 92). Moreover, 16 cases were classified as low-risk (EORTC 1 - 4), 32 as intermediate-risk (score 5 - 9), and 10 as high-risk groups (score 10 - 17). Residual tumor was detected histopathologically in 19 (32%) cases. In addition, 3 (5%) patients had stage progression to pT2, all of whom belonged to the high-risk group for predicting progression of NMIBC. Residual tumor rate was 0%, 40.6%, and 60% for low-, intermediate-, and high-risk groups, respectively.

Based on the results of Pearson’s chi-square test (Table 1), the difference in residual tumor rate between these recurrence risk groups was statistically significant (P < 0.002). However, the discrepancy in tumor progression was not found to be of statistical significance among the risk groups. Of 13 cases with macroscopic residual tumor, five patients belonged to the high-risk group, and eight cases belonged to the intermediate-risk group. In addition, four patients had macroscopic residual tumor found at locations independent from the primary resection site.

A possible association between residual tumor rate and patient age and other variables on the EORTC scoring table was also assessed separately. We found that age, tumor size, and grade were significantly related to finding the residual tumor. No such relationship existed with the number of tumors, T category, or CIS (Tables 2 - 4). Based on logistic regression, only tumor grade had an impact on residual tumor detection (Table 5).

Bladder cancer is the most common malignancy of the urinary tract, and TUR is the state-of-the-art initial management for all superficial bladder cancers. Also, 75% of patients subjected to TUR for bladder cancer are initially confirmed to have NMIBC (stage Ta, T1, or CIS) (1).

One systematic review of 8,409 patients with NMIBC subjected to re-TUR revealed the risk of tumoral residue after the initial procedure to be 51%. Furthermore, about 8% of T1 tumors had been under staged at the initial resection (4). Several large retrospective studies have confirmed that absence of muscle on the first resection portends a higher residual tumor rate at re-TUR (3, 5, 6). As such, the presence of muscle on initial TUR can imply adequate sampling and satisfactory quality of the resection (3).

It is accepted that the quality of initial resection has major impact on second TUR outcomes. Therefore, initial TUR samples devoid of muscularis propria were excluded from this study on the relationship between tumor biology and re-TUR results. However, data remains confusing about an association between tumor characteristics and second TUR outcome. Prognosis of NMIBC depends on many factors, including age, sex, size, multiplicity, growth pattern, grade, level of lamina propria infiltration, lymphovascular invasion, history of recurrence, and presence of CIS (9); however, the exact role of each factor remains unknown (2).

Brausi et al., in an EORTC study, concluded that recurrence or residual tumor rate was 7% for solitary tumors and 27 - 40% in patients with more than five lesions (2). On the other hand, Sanseverino et al. did not find any significant association between focality of initial lesions and the residual tumor rate (10).

A possible explanation for these heterogeneous findings may be that no single factor can reliably embody tumor biology. In 2006, the EORTC used a database of 2,596 patients with Ta/T1 lesions to create a scoring system and risk tables for predicting the risk of recurrence and progression (i.e., biological behavior) of superficial bladder cancers. In this scoring system, six clinical and pathologic factors have been taken into account as follows: multiplicity, tumor size, prior recurrence, T stage, presence of concomitant CIS, and tumor grade (8).

The potential for expanding the EORTC scoring system to applications beyond its initially intended purpose of linear prognostication has been explored. Tumors additionally detected on narrow band width imaging over white light cystoscopy have been shown to correspond to a higher EORTC risk level (12). Building upon this experience, we utilized the EORTC scoring system to classify our patients into three risk groups and see if they correlate to any difference in residual tumor rate after re-TUR.

In our study, the residual tumor was found in 19 (32.8%) patients. who underwent second TUR overall. These were detected more often in the high-risk group (60%) compared to intermediate-risk (40.6%) and low-risk groups (0%). The relatively low overall rate of residual tumors in this study may be due to four reasons as follows: a) only including cases pre-screened for the technical adequacy of resection, through excluding those with no muscle on the initial sample; b) that all procedures were performed by a single surgeon with close adherence to the EAU guidelines on TUR, thereby minimizing inter-operator variations in technique, and experience curve issues; c) that we only included primary cases with no prior history of recurrence; d) a relatively small sample size.

Interestingly, we did not encounter any residual tumor in the low-risk group; therefore, a second resection may not be needed for these patients if muscularis propria is present in the first specimen. It should be noted that some of these patients had high-grade T1 tumors. This result is consistent with the findings of Gontero et al., who concluded that re-TUR may not be necessary for all patients when the initial resection has been adequate (5); however, further studies are needed to confirm these results.

Since all procedures were performed by a single surgeon, we believe that an inadequate depth of tumor resection cannot explain the observed higher incidence of residual tumor in our high-risk group. It appears that tumor characteristics have placed an impact on second TUR outcomes. In our study, the prevalence of T1 and Ta lesions was 69% and 31%, respectively; but the difference in residual tumor rate between the two groups was not statistically significant (37.5% for T1, and 22% for Ta, P = 0.25)

Age, grade, and tumor size had an impact on residual tumor rate in this study. As expected, the most residual tumors were found in G3 cases, and this relationship was statistically significant (P = 0.014).This finding suggests the effect of tumor biology on the residual tumor rate. Residual tumor was also more commonly encountered in elderly patients, probably mirroring the higher prevalence of high-risk tumors in this age group.

In our study, the mean tumor size for those with and without residual tumor was 52 mm and 40 mm, respectively. In theory, there could still be a chance that the depth of TUR was not uniform on all parts of a large resection site, and this, in turn, may have resulted in a higher incidence of residual tumor in these lesions. There was no significant relationship between residual tumor and number of tumors or the presence of CIS. This can be due to our small sample size.

Thirteen macroscopic residual tumors were discovered, of which notably four were distant from the initial resection site. Since all procedures were performed by a single experienced surgeon, the likelihood of lesions being overlooked during TUR was very low; this discrepancy likely stems from an aggressive tumor biology.

Finally, three patients had stage progression, all of whom belonged to the high-risk group; but there was no statistically significant association between the progression risk group and the tumor progression rate. Considering that tumor upstaging was only present in the high-risk group, we suggest that in this subset, a second TUR be done sooner, preferably two weeks after the initial resection.

We acknowledge that a modest sample size is a limitation of this report, but the exceptional value of this data derived from selecting only primary non-recurrent patients justifies its publication. However, these important findings await confirmation by future studies.

This study suggested that tumor biology has an impact on residual tumor rate at re-TUR, and the EORTC scoring system, originally designed for longitudinal applications, may also serve as a potential tool for predicting the risk for progression and presence of residual tumor at the time of re-TUR.