Acquired immunodeficiency syndrome is a behavioral disorder that can be detected via two methods, including active and passive screening.

This study aimed to evaluate the cost-effectiveness of screening strategies of HIV/AIDS among injection drug users (IDUs) referring to the voluntary counseling and testing (VCT) center and drop-in center (DIC) of Shiraz University of Medical Sciences.

This was a cross-sectional cost-effectiveness analysis to compare the cost-effectiveness of the two active and passive screening methods in 2015. The decision tree model, along with the TreeAge11 software, was used to analyze the data.

According to the findings of the study, the active screening method is more cost-effective than its passive counterpart, and it is recommended to be used in these cases.

Human immunodeficiency virus (HIV) infection and acquired immunodeficiency syndrome (AIDS) have become a global epidemic and one of the most important challenges to the health system over the past two decades (1). Acquired immunodeficiency syndrome is caused by the immunodeficiency virus (2) and is a type of behavioral disorder that is transmitted due to the lack of health awareness and social misconduct (3). Moreover, long-term asymptomatic HIV-positive patients are considered a potential risk (4). According to statistics, more than 35.3 million people worldwide are infected with AIDS (5). In the countries of the Eastern Mediterranean, the prevalence of HIV/AIDS is estimated at 0.2% (6). What adds to the importance of preventing and screening this disease is that there is no definitive treatment for it (7) and that people with HIV infection may remain asymptomatic for a remarkably long period and can easily transmit the infection (8). During recent years, there has been little concern about people's awareness of the transmission and prevention of the disease and dealing with affected people, and the increased risk of the disease has classified the issue as one of the health priorities (9).

Various reports have shown that most infected people in Iran are injection drug users (IDUs). However, various studies have reported a relatively different percentage in different years, ranging from 51 to 85% (10-14). Notwithstanding, what is certain is that injection drug use by a great number of people makes AIDS spread day by day (15). This image has led to effective practical measures to be taken to reduce the problem of injection drug use in the last few years; however, it seems that paying attention to this high-risk group has created the belief that other high-risk groups do not have much priority (16).

According to the study conducted by the World Health Organization (WHO), it is estimated that the number of people living with HIV in Iran is 80,000, while only about one-quarter of them have been identified (8). In the industrialized countries, the cost of medical services provided to an AIDS patient is estimated at $25-150 thousand, which is not available in developing countries (17). On the other hand, the Gross Domestic Product (GDP) of most countries has declined by the lack of human capital (16, 18) because without proper nutrition, health, and medicine, many people die due to the complications of AIDS. Moreover, since people in economically active age groups are most likely to suffer from the disease, the taxable population is thus reduced on top of available resources for public expenditure (19). At the household level, AIDS also affects the level of household income, which also increases healthcare costs. A study in Ivory Coast has shown that the cost of treatment for families with HIV-infected members is twice that of other families. These additional costs also lead to cuts in education expenditure, as well as other personal and family investments (20). Also, in reviewing the economic burden of AIDS in China in 2007, the average economic costs of AIDS prevention centers were estimated at $41.51. In this regard, given the burden of the disease, finding affected patients can be an effective step towards reducing the excessive costs of AIDS (21).

Effective screening for HIV-related cases is necessary since it can directly have extensive effects on the individual and others in the community due to the high externality associated with it (12). Besides, AIDS is a threat to development, security, and economic growth; accordingly, as reported in Sharifi’s study, each 1% increase in HIV mortality resulted in a 1.6% decline in Iran's GDP in the years 1990-2009 (22).

In Iran, the insufficient number of economic studies on HIV is evident to find community-based and cost-effective programs (23). Given the lack of financial resources in health systems in developing countries, cost-effectiveness analysis of both active and passive screening methods can help clarify the economic outcomes of these methods and also helps the policymakers and program managers to make informed decisions about resource allocation, thus allowing them to choose the most effective and efficient method by considering available resources through reviewing alternatives to achieve their goals. The existence of IDUs as the most vulnerable group to the disease in the country and the responsiveness of authorities to the development of HIV-related centers are convincing scientific and documentary evidence to justify and evaluate the costs and effectiveness of these centers.

Since one of the problems of the healthcare system in Iran, like many other countries, is the high cost of treating this disease, this study aimed to determine the cost-effectiveness of active versus passive screening of cases with HIV/AIDS among IDUs referring to the voluntary counseling and testing (VCT) center using cost-effectiveness analysis in 2015.

Considering that the criterion for calculating costs in this study was the provider’s perspective, and concerning the cost data extracted from documents and reports (for the passive screening method), as well as predicted costs (for the active screening method), the costs were generally classified into two categories of direct and indirect costs. To complete the costing checklist of patients for the passive screening method, 593 cases of HIV-infected IDUs referring to the VCT were used. Moreover, an expert panel was used to determine the costs of the active screening method. Accordingly, five people were selected as experts with more than five years of experience in this field and estimated the cost of the active screening method through interviewing and group meetings. Also, given that the statistics on the HIV-infected patients collected from the VCT in Shiraz belonged to the years 2004 to 2014, the following formula provided by the Central Bank was used to convert the costs to the current value) One dollar = 32,375 Rials) (the year 2015):

To measure the effectiveness in both active and passive screening methods, the averted case index (the number of individuals not affected by the disease as a result of early diagnosis), as well as HIV-positive patients, was diagnosed at the early stages of HIV infection.

After drawing the decision tree, an incremental cost-effectiveness ratio (ICER) was calculated using the following equation. In this formula, the cost refers to the average cost (US $), and the effectiveness indicates the individual effectiveness according to the mentioned indices.

To perform the cost-effectiveness analysis, TreeAge version 2011 software was used.

The average direct costs per capita estimated in both active and passive screening methods were $803.69 and $1337.21, respectively (Table 1).

The results indicated that the average indirect costs per capita in both active and passive screening methods were $16.456 and $156.54, respectively (Table 2).

According to Table 3, the total direct and indirect costs in both active and passive screening methods were $855.39 and $1528.90, respectively (Table 3).

In this study, a decision tree model was applied to estimate the expected cost and effectiveness of passive and active screening methods (Figure 1). In Figure 1, the terminal nodes of the tree represent the average cost, and the values under the branch indicate probabilities. 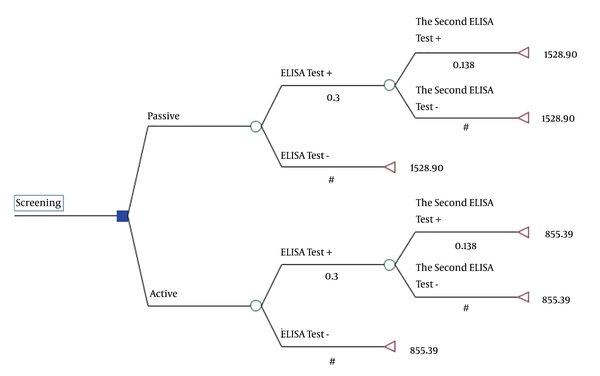 The Tornado diagram in Figure 2 shows that the results of the study had the highest and lowest sensitivity to the cost and effectiveness of the passive screening method, respectively. 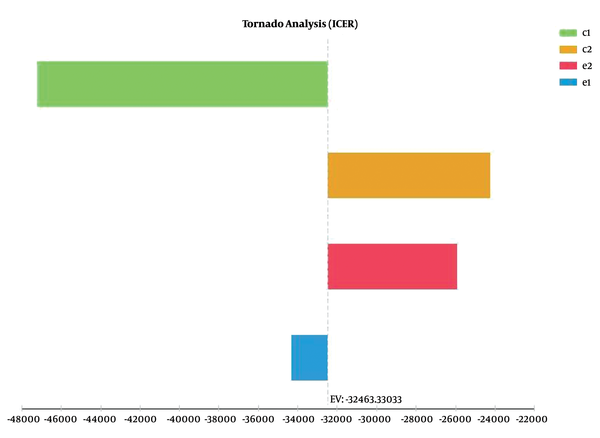 The results of probabilistic sensitivity analysis using Monte Carlo simulation are indicated in Figure 3. The results showed that active screening was more cost-effective than passive screening, with a maximum willingness-to-pay threshold of $49,521 calculated based on the WHO method (three times of per capita GDP, $49,521). 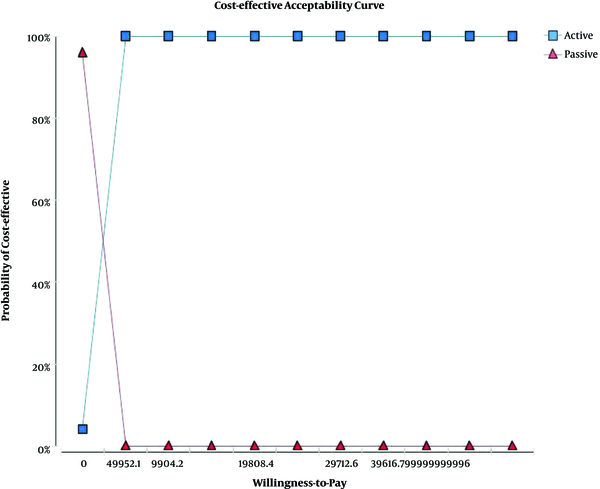 Figure 3. The willingness-to-pay chart of the active versus passive screening methods for HIV/AIDS-positive IDUs referring to the VCT center affiliated to Shiraz University of Medical Sciences (in 2015)

As can be inferred from the findings of this study, of indirect costs associated with the active and passive screening methods, the highest cost was associated with the mobile medical team, consisting of 29% and 45% of the total indirect costs in active and passive screening methods, respectively. Also, the lowest indirect cost was related to the depreciation of medical equipment in both active and passive screening methods. Hesam et al. (2014) also found that building maintenance costs (equal to $972.42) were the highest in capital expenditures. On the other hand, the personnel wage amounting to $35,840 had the highest rank among the current costs of the private and public VCT centers under the supervision of Shiraz University of Medical Sciences and Health Services (24). The results of a study conducted by Keshtkaran et al. (2012) examining the cost-effectiveness of methadone maintenance treatment centers for the prevention of HIV among IDUs indicated that the personnel wages, as part of the current costs, had the highest value and amounted to $287,626.13. However, transportation costs as a fraction of the current costs had the lowest value (about $197.38) (26).

According to the findings of the present study, the mean value of the total direct and indirect costs ($1528.90) in the passive screening method was greater than the estimated value ($855.39) in the active screening method. Keshtkaran et al. (2012) showed that the intervention costs (center spending) excluding non-IDUs were $204,297.7. In their study, the non-intervention cost was estimated to be $13,942,756.8 (26).

This research was performed by Mrs. Shima Bordbar in partial fulfillment of the requirements for obtaining an M.Sc. in Health Administration at Shiraz University of Medical Sciences. This article is the result of a research project (Code 10409-07-01-94) approved by the Deputy of Research of the aforementioned university.