The Use of APACHE II Scoring System for Predicting Clinical Outcome of Patients Admitted to the Intensive Care Unit: A Report From a Resource-Limited Center

Scoring systems help predict the duration of hospital stay and outcome of critically ill patients. The APACHE score is possibly the best-known and most widely used scale for evaluating the severity of acute illness (1). The APACHE scoring system was introduced in 1981 by the Medical Center of George Washington University as a method for measuring the severity of the disease (2). This system was edited by Knaus et al. and named APACHE II (3, 4). This scoring system may also be helpful in patient selection for admission to the Intensive Care Units (ICUs), particularly when the number of ICU beds is limited. Our study was done to emphasize the use of these scores by assessing patients’ outcomes in ICUs of a resource-limited region in Iran using the APACHE II scale.

A cross-sectional study was conducted in 2015 and 2016. All cases over 16 years of age with a hospital duration stay of more than eight hours were included. Burn patients or those who were brain-dead were excluded. In the case of multiple ICU admissions, data of the first admission were recorded. Demographic data, including patients’ age, sex, length of admission, outcome, and final diagnosis, were recorded using pre-designed data collection forms. A two-part checklist was used for data gathering. The first part included the demographic information, and the second part included the standard APACHE II checklist. In this method, numerical values that were assigned to each variable were summed up and reported for each patient. The mean, standard deviation (SD), minimum, and maximum, as well as the sensitivity, specificity, and positive and negative predictive values were reported, and finally, a ROC curve was drawn. A one-sample t-test was used for comparing the mean scores with fixed numbers, and the independent t test was used for comparing the mean scores between the two independent groups (discharged cases versus expired patients). The Kolmogorov-Smirnov test was used for examining the normalization of quantitative data in each group, and the chi-square test was applied for determining the relationship between the two classified qualitative factors. We used SPSS ver.18 and MedCalc software to analyze the data.

The APACHE II score was used to evaluate the severity of disease among the included patients. This scoring system is composed of three main components: (1) Acute physiology scores, (2) age points, and (3) chronic health points.

The independent t-test was used for comparing the mean age among discharged (n = 103) and expired (n = 82) patients, as well as for comparing the duration of hospitalization. The mean age of expired patients was 54.45 ± 22.25 years, and the mean age of discharged patients was 38.49 ± 23.11 years. A chi-square test was also used to investigate the relationship between patients’ gender and their outcome. According to our results, there was a significant increase in the patients’ mortality with advancing age (P < 0.001).

The sensitivity, specificity, and positive and negative predictive values for different cutoff points are reported in Table 1 using MedCalc software. As can be seen, the best cutoff point was determined to be 19.

This APACHE cutoff was highly specific to our patients. Figure 1 displays the ROC curve. The area below the ROC curve was 0.888 (standard error = 0.026). 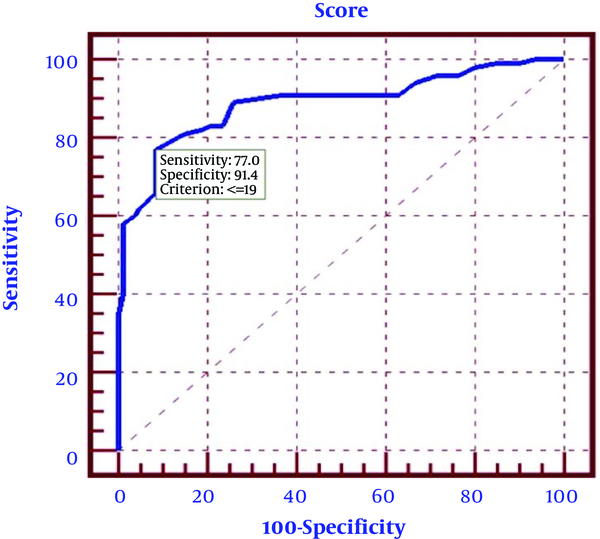 In this study, the mean age of the included subjects was different between the two groups (expired and discharged) and was significantly higher among expired patients. Our results were consistent with the results by Niewinski et al. (5). In contrast, Cho et al. (6) believed that age did not have a significant impact on the mortality of ICU-admitted patients. The mean duration of hospitalization was not significantly different between both studied groups. The results of our research were consistent with the findings of studies by Giangiuliani et al. (7) and Donahoe et al. (8). There was no significant difference between both studied groups regarding the gender ratio. The findings by Ho et al. support the results of our study (9). We measured the APACHE II score for discharged patients, and a mean value of 14 was obtained. Comparing this value with a reference point of 20 showed that the mean APACHE II score in discharged patients was significantly smaller than 20. Also, by measuring the APACHE II score among expired patients, a mean score of 27 was found, and comparing it with a score of 20 showed that the mean APACHE II score in expired patients was significantly higher than 20. Our results were consistent with studies by Cho et al. (6), Giangiuliani et al. (7), and Ho et al. (9). According to Anushiravani et al. (10), non-office hour admission did not affect the mortality of patients admitted to an internal medicine ICU; however, they showed that the highest peak of mortality was between 10 PM and 2 AM. The other important point is that fatigue can surely be a cause of mismanagement in any medical professional (10). We showed that patients who had a lower APACHE II score would have a better prognosis. A cutoff point of 19 can be used for selecting patients to be admitted to the ICU in our hospital. In addition, more studies are required to evaluate the results of the implementation of this APACHE admission cutoff point.