The Effect of Ginger and Ondansetron on Post-Operative Nausea and Vomiting in Patients Undergoing Eye Surgery: A Triple-Blind Clinical Trial

Postoperative nausea and vomiting (PONV) is still a common complication that occurs frequently at the time of recovery from eye surgery.

The present study aimed to compare the effect of oral Ondansetron and Ginger on the frequency and severity of postoperative nausea and vomiting in patients undergoing eye surgery.

A total of 148 patients were randomly assigned to Ginger, Ondansetron, and placebo groups. Group A received a Ginger capsule (1,000 mg), group B Ondansetron capsule (16 mg), and group C placebo capsule with 30 ml water, one hour before surgery. The frequency of nausea and vomiting and the severity of nausea were recorded immediately after recovery, 1, 2, and 4 hours after recovery. Also, some side effects following prescription such as headache, stomach ache, dizziness, and cardiac arrhythmias were recorded.

Of the 148 participants, 54% were men, and 46% were women. The average age was in group Ginger (36.14 ± 2.17), group Ondansetron (36.24 ± 2.49), and group placebo (36.24 ± 2.20). There was no significant difference in the frequency of vomiting between the three groups immediately after recovery (P = 0.19) and 4 hours after surgery (P = 0.18). However, the frequency of vomiting in Ginger and Ondansetron groups 1 and 2 hours after the surgery was significantly lower than that in the control group (P = 0.003). No significant difference was observed in the severity of nausea between the three groups at certain times (P > 0.05). There was no significant difference in terms of the need for injection antiemetic drugs after surgery (P = 0.2).

Ginger and Ondansetron can reduce the frequency of vomiting. However, Ginger was more effective, safer, and less expensive than Ondansetron; therefore, it may be a better substitute for Ondansetron to prevent PONV.

Postoperative nausea and vomiting (PONV) is one of the most important complications after surgery (1-3). It is well known that eye-surgery is associated with an increased risk of PONV about 20% to 40% (2, 3). PONV is a very distressing outcome, which may lead to medical complications such as wound disruption, esophageal tears, gastric herniation, fatigue, dehydration, possibly electrolyte imbalances, and lung aspiration (4-6). There are some factors affecting postoperative nausea and vomiting such as age, sex, obesity (BMI > 30 kg/m2), anxiety, gastroparesis (following anesthesia and analgesia), hypoglycemia, and vasoactive medications (1, 7, 8).

Today, a large number of methods are available for controlling nausea and vomiting, such as drug therapy and complementary therapies (1, 5). Choosing and prescribing appropriate medical or complementary therapies used beside pharmacological methods significantly improve the quality of life and performance of the patients and result in beneficial effects (9-12). Ondansetron inhibits vomiting refraction with antagonistic effects of serotonin receptors at the end of the vagus and central receptors in the vomiting center (9). In traditional medicine, especially in China, Japan, India and Iran, Ginger (Zingiber officinale) used to treat various diseases, especially nausea and vomiting of pregnancy. Recent pieces of evidence suggest that its antiemetic activities may be derived from its anti-serotonin-3 effects on both central nervous and gastrointestinal systems (13-18).

Regarding the frequency of PONV post-surgical and general anesthesia and evidence that mentioned the use of medicinal herbs is one of the treatments, which does not concern the use of synthetic and chemical drugs, complementary and alternative therapies may be used as therapeutic or supportive therapies either as an independent treatment or in combination with standard therapies among patients (13). To the best of our knowledge, no study compared the effect of oral Ginger and Ondansetron on PONV so far. Simbolon and colleagues assessed the addition of omeprazole to Ondansetron (5), and the Ginger effect was evaluated alone in some studies (4, 6, 15).

The present study aimed to compare the effect of Ondansetron and Ginger capsules on PONV after eye surgery.

This study is a triple-blind clinical trial study. The trial was registered prior to patient enrollment at IRCT (IRCT2014060918020N1). The study was conducted from September 2016 to December 2018. In September 2016, this study was approved by the Vice-chancellor for Research of Iran University of Medical Sciences, and the ethics code was obtained from the relevant Ethics Committee (Code: IUMS. 101568). Then the patients were recruited from those who referred to Rasoul-e-Akhram Hospital in Tehran. Sample size was determined based on p = 0.4, p2 = 0.15, = 1.96, = 0.84 1 z1 - α/2 z1 - β and d = 0.25. Thus, 155 patients who were willing to participate in this study and had the inclusion criteria were randomly selected. A simple randomized sampling procedure was carried out on the basis of study criteria using the “Random Allocation Software” program, but 148 patients were included in the study. The inclusion criteria were ages 18 - 60, ability to swallow capsules, platelet counts above 100,000, no obesity and hepatitis, no pregnancy, the lack of epilepsy, diabetes, and kidney diseases and cancer, not using antiemetic drugs, no long-term treatment with corticosteroids, and no history of allergy to Ginger or Ondansetron. All eligible patients were randomly divided into three groups, by sealed envelopes, as (A) Ginger, (B) Ondansetron, and (C) Placebo capsule. The sample recruitment process is shown in Figure 1. The patients, those administering the drug, and those registering the signs and symptoms of the patients were unaware of the medicine used for each group. 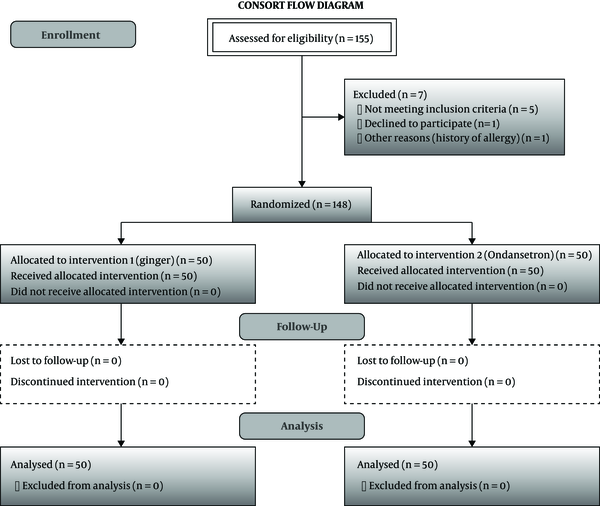 The sampling was conducted after introducing the method and written informed consent was obtained from all subjects participating in the study. Ginger capsule (1,000 mg), Ondansetron capsule (16 mg), and placebo capsule were prepared in a pharmacological laboratory of Iran University of Medical Sciences with the same shape. In the next step, medications were randomly assigned to the research unit. The patients in three groups received capsules with 30 ml of water one hour before surgery.

The anesthesia technique, type of anesthetic drug, and duration of anesthesia were the same in all participants. The medication of anesthesia induction included midazolam 2 mg, fentanyl 2 μg/kg, thiopental 5 mg/kg, atracurium 0.5 mg/kg. Also, 50% oxygen and 50% N2O were used for the maintenance of anesthesia. Medications that could cause nausea and vomiting, such as morphine, were not used in the study. Nausea was recorded on a 10 cm visual analogue scale (VAS), which ranged from 0 to 10, scores 0, 1 - 3, 4 - 6, 7 - 9, and 10 that were allocated to no nausea, mild, moderate, severe, and very severe nausea, respectively (19). The number of vomiting episodes was recorded (20). Antiemetic drugs (Ondansetron 2 mg IV PRN) were prescribed for those patients who had more than two vomiting episodes.

In the researchers-made checklist, the patient’s demographic information included age, gender, weight, smoking, surgery duration, systolic and diastolic pressure, heart rate, respiratory rate, temperature, anesthetic and sedation drugs used, duration of the anesthesia and onset of recovery, the frequency of vomiting, the severity of nausea recorded at different times (immediately after recovery, 1, 2 and 4 hours after recovery from anesthesia). In addition, possible complications such as abdominal pain, heartburn, shortness of breath, diarrhea, and insomnia were asked and recorded. A checklist and a standard tool (VAN) (19) were used by a researcher to evaluate the severity of nausea and vomiting among the participants. The participants, researchers, and the statistical analyzer were unaware of which drugs were received. Finally, the quantitative variables were compared using paired t-test or one-way ANOVA followed by Tukey test for pairwise comparisons. The comparison of qualitative variables was performed using contingency tables, chi-square, or Fisher’s exact test. A P value of ≤ 0.05 was considered statistically significant.

According to the results, 155 patients undergoing eye surgery (cataract or glaucoma) were included in this study, among whom 7 patients were excluded from the study due to the lack of proper inclusion criteria and other reasons (Figure 1). Of the 148 participants, 54% were men, and 46% were women. No significant difference was observed between the three groups (Ginger, Ondansetron, and placebo) in terms of age, weight, gender, surgery duration, systolic blood pressure, diastolic blood pressure, heart rate, respiratory rate, body temperature, and time of anesthesia (P > 0.05) (Table 1). In other words, the three groups were homogeneous in terms of these features. Also, the participants had no history of smoking.

Table 1. Individuals’ Characteristics in the Ginger, Ondansetron, and Placebo Groups 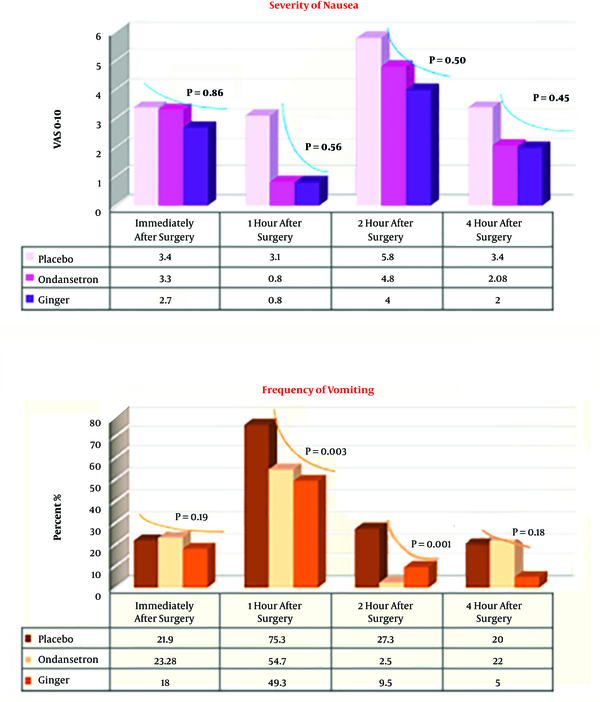 Among the participants, 10% of the Ginger group, 8% of the Ondansetron group, and 22% of the placebo group needed an injection of antiemetic drugs after the surgery and at the time of recovery in the recovery department. The statistical difference was not significant between the three groups (P = 0.2). Regarding the possible side effects, only abdominal pain was reported in one of the participants in the Ondansetron group.

In the present study, the effects of oral administration of Ondansetron (16 mg) and Ginger (1000 mg) 1 hour before anesthetic induction on postoperative nausea and vomiting was evaluated in patients undergoing eye surgery. According to the results of this study, the severity of nausea in Ginger, Ondansetron, and placebo groups was not statistically different (P > 0.05). However, the frequency of vomiting in 1 and 2 hours after the surgery was significantly different in three groups (the Ginger group was lower than Ondansetron and placebo groups).

Previous studies revealed that the prevalence of PONV after eye surgery is very high (21-25). The comparison of the effect of three groups showed that Ginger reduced the severity of nausea; however, it was not statistically significant. The results of many studies are similar to those of our study (26, 27) and showed that Ginger could reduce the severity of nausea and frequency of vomiting. Apareman et al. showed that PONV was significantly reduced by Ginger than the recipient medication (26). We suggest that a larger sample size may better reveal the effectiveness of Ginger and Ondansetron. However, we could not involve more samples due to prolonged sampling time and dissatisfaction of many patients owing to fear of drug side effects.

Among complications considered in the present study, only one of the participants reported these effects in the Ondansetron group. However, no complications were observed in the participants in the Ginger group. In the review of Nathorn Chaiyakunapruk et al., only abdominal pain and heartburn were reported as complications following the use of Ginger (20). Also, the studies of Montazer et al. and Ghanbari et al. showed that few Ginger-receiving individuals experienced some problems such as stomachache and increased nausea immediately after taking the Ginger capsule (11, 12). Therefore, the probability of occurring complications is not considerable and harmful after taking oral capsules of Ginger (1,000 mg) and Ondansetron (16 mg). No record of complications after the use of Ginger can be considered an important point to safely administer this drug before surgery to control PONV.

Among the participants, 10% who received Ginger capsules, 8% who took Ondansetron, and 22% who received the placebo needed to receive IV antiemetic drugs. Regarding the treatment of nausea and vomiting, the participants were administered injectable Ondansetron and nausea. As a result, both medicines could reduce the patient’s need for antiemetic and vomiting drugs, and the majority of participants did not need to receive a new antiemetic medicine. We recommended further clinical trials with a larger sample size to reveal whether Ginger is more effective than Ondansetron. Also, we recommend further studies to compare Ginger with synthetic medications to be used as antiemetic for prevention, especially when surgery is performed under general anesthesia.

Ginger and Ondansetron can reduce the frequency of vomiting. But Ginger was more effective, safer, and less expensive than Ondansetron; therefore, it may be a better substitute for Ondansetron to prevent PONV.

This article is the result of a research project entitled “Comparison of the effect of the oral capsule of Ondansetron and Ginger on the frequency and severity of postoperative nausea and vomiting in patients undergoing eye surgery” whit IRCT code 2014060918020N1. This research was implemented with the support of the Iran University of Medical Sciences (IUMS) and Health Services. At the end of the study, the researcher would like to thank and appreciate the cooperation of the officials and staff of the anesthesiology of the hospital.