Changes in the Rate of Some Rare Neonatal Outcomes After the Implementation of the Health System Reform Plan in Iran: A 70-Month Case Study of an Educational Hospital Research

The health system reform plan (HSRP) was launched in Iran on 15 May 2014, with three approaches to protect people from the financial system, create equity in access to health services, and improve the quality of services.

The present study aimed at investigating the changes in the rate of some rare neonatal outcomes after the implementation of HSRP in Iran.

The present cross-sectional study was conducted in Izadi Hospital in Qom Province, in which 52,817 vaginal delivery and cesarean sections were evaluated for the incidence of complications from 15 June 2011 to 15 April 2017. The complications included hypoxic-ischemic encephalopathy, low Apgar score, cephalohematoma, clavicle fracture, the Erb palsy, and intracerebral hemorrhage. Complications were compared per 10,000 births before and after the implementation of the plan. Data were analyzed with SPSS software using t- and chi-squared tests.

It can be concluded that HSRP could somewhat achieve its goals on the promotion of vaginal delivery. However, the implementation of the plan was associated with an increase in some minor neonatal complications.

In May 2014, the Iranian Ministry of Health and Medical Education, along with the country’s move toward the Vision 2025, placed a set of programs called the health system reform plan (HSRP) on the agenda (1). The HSRP was implemented based on three main approaches as financial protection of people, creation of equity in access to healthcare services, and promotion of the quality of healthcare services. One of the goals of the HSRP was to reduce the rate of cesarean section in Iran (2). Despite the fact that vaginal delivery in most cases is the safest method for both the mother and the baby, before the implementation of the HSRP, both mothers and obstetrician-gynecologist showed more interest toward cesarean section, which led to a significant increase in the rate of this type of delivery in Iran (3).

Results of a study by Demissie et al. (9), on more than 12 million births showed that vaginal delivery is associated with a higher risk of trauma in infants compared to cesarean section (2% vs. 1.1%).

Overall, the results of previous studies show that vaginal delivery and cesarean section have their advantages and disadvantages, and each can help the mother and the baby if performed properly. Therefore, keeping these aspects in mind, decisions on the application of which type should be made with caution.

Prior to the implementation of HSRP, factors such as fear of vaginal delivery and its pain, fear of neonatal complications, and the lack of access to physicians during labor increased the rate of cesarean section compared with vaginal delivery. Another issue was the support of physicians for cesarean section and tariff rates on this type of delivery that was not made on the vaginal type.

The present retrospective, observational study (before and after exposure) was conducted on all deliveries performed in Izadi Hospital in Qom, Iran, during 70 months, 35 months before, and 35 months after the implantation of HSRP. The total number of cesarean sections and vaginal deliveries performed from June 2011 to March 2017 was recorded according to registries at the medical records department. Also, the medical profiles of infants admitted during the study period were reviewed for the studied complications (stage 2 or 3 ischemic-hypoxic encephalopathy, low Apgar score, cephalohematoma, clavicle fracture, the Erb palsy, intracranial hemorrhage, intubation, need for cardiac massage, and need for positive pressure ventilation and intubation). The medical profiles of infants with the studied complications were used to extract the required information, including the type of complication, gender, delivery type, delivery date, Apgar score, gestational age, and birth weight. Neonates with anomalies or metabolic or syndromic disorders were excluded from the study. As far as possible, babies transferred to other hospitals due to lack of beds were also followed up. Patients with one of the three complications of ischemic-hypoxic encephalopathy, the Erb palsy, and clavicle fracture were followed up by telephone, and the sustainability of their birth complications was investigated.

The collected data were analyzed with SPSS software version 25. The rate of complications was measured per 10,000 births in the two periods of before and after the implementation of HSRP; then, the outcomes were compared between the two groups. Statistical analysis was performed using chi-squared and the Fisher exact tests.

The present article is part of the results of a research project approved by the Ethics Committee of Biomedical Research, Qom University of Medical Sciences (ethical code: IR.MUQ.REC.1395.101); confidentiality of data was also guaranteed.

Table 1. The Number of Births During the Study Period Based on the Type of Deliverya

The medical profiles of 313 neonates with the studied complications were extracted, and totally, 492 complications were recorded, of which 87 cases belonged to pre-HSRP and 405 to post-HSRP. Of the 62 cases of the pre-HSRP, the type of delivery in eight infants was the vacuum-assisted vaginal delivery, and in one, the cesarean section due to full arrest. Of the 251 cases of the post-HSRP, 23 were born by vacuum extraction, and it was cesarean section due to full arrest in 31 (Table 2).

Table 2. Distribution of the Types of Delivery in Infants by the Studied Complications Based on the Examined Period

Totally, 336 cases of complication were recorded during vaginal delivery and 156 during cesarean section (Table 3).

Table 3. The Number of Studied Complications Based on the Type of Delivery and the Examined Period

Statistical analysis showed that after the implementation of HSRP, the rate of complications- i.e., stage 2 ischemic-hypoxic encephalopathy, the need for positive pressure ventilation, low Apgar score, cephalohematoma, clavicle fracture- significantly increased per 10,000 natural births (Table 4). There were no significant differences in other complications between the two groups (Table 4).

Table 4. Comparison of Neonatal Complications Before and After the HSRP Implementation Based on the Type of Delivery

In the case of cesarean section, there was a significant increase in the incidence of stage 2 ischemic-hypoxic encephalopathy, need for intubation, need for ventilation with positive pressure, need for cardiac massage, and low Apgar score after the implementation of HSRP (Table 4).

A total of 83 patients with one of the three complications of ischemic-hypoxic encephalopathy, the Erb palsy, and clavicle fracture were followed up by telephone for the sustainability of complications. The family of 21 infants did not respond. Among those responding, six infants with ischemic-hypoxic encephalopathy developed cerebral palsy, of which three belonged to the pre-HSRP period and three others to the post-HSRP. Of the four infants developing persistent outcomes of the Erb palsy, three belonged to the pre-HSRP and one to the post-HSRP. 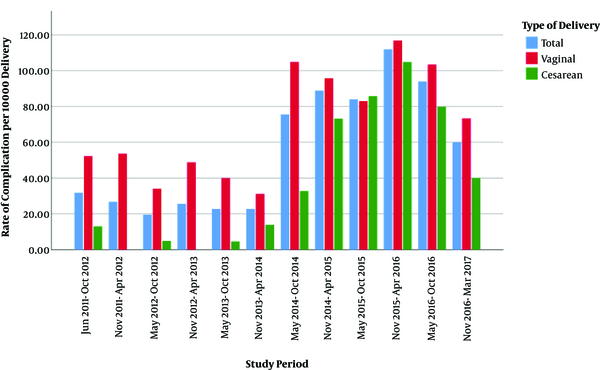 The trend of the studied complications incidence per 10,000 births in six-month intervals, based on the type of delivery

The authors’ previous study in Qom showed that the decreased rate of cesarean section was mostly attributed to emergency cesarean delivery (13). Another study in Shush City, Iran, showed a significant decrease in the causes of cesarean section- i.e., maternal pelvis-fetal head mismatch, meconium excretion, etc., after the HSRP implementation (2). It means that the gynecologists, after the implementation of HSRP, gave a greater chance of natural birth, and their decision on cesarean section was made with more delay. It could be one of the causes of an increase in some complications, such as the Erb palsy, ischemic-hypoxic encephalopathy, birth with a low Apgar score, and clavicle fracture.

In Norway, the results of a large clinical trial (2000) showed that the tendency of physicians toward cesarean delivery was greater in breech cases. Subsequently, in a study comparing birth complications between two periods, the results showed that during periods in which physicians had a greater tendency toward vaginal delivery in breach cases, the incidence of the low Apgar score and neonatal death was also higher (14).

Results of a study conducted in a hospital in Tehran, Iran, showed that the rate of birth injury in vaginal delivery was higher than that of emergency cesarean section (4.16% vs. 2.71%) (3).

The results of the study by Liu et al. (15), showed that the incidence of neonatal sepsis and umbilical cord blood acidosis was higher in twins born by vaginal delivery compared with their counterparts born by cesarean section.

A study conducted in Kurdistan Province, Iran, evaluated the viewpoint of healthcare service providers on the Vaginal Delivery Promotion Package in HSRP and the results showed that the main disadvantage the healthcare service providers- i.e., specialists and midwives, worried about was the increased maternal complications due to excessive emphasis on vaginal delivery (16).

Another change occurred after the implementation of HSRP was an increase in the number of vaginal delivery due to its free franchise, which consequently increased the workload of hospital personnel and may also affect the incidence of the studied complications.

According to the type of study, it was not possible to evaluate all variables affecting the desired outcomes in the present study. The study was conducted in a single-center, and the manner of implementing the protocols in the center can affect the studied complications. Evaluation of the overall effect of HSRP requires a comprehensive review of the plan, such as examining its cost-effectiveness and comparing other aspects of the plan, such as the impact on maternal complications, long-term infantile complications, etc.

The HSRP seems to be approached its goals in the promotion of vaginal delivery, but the results of the present study showed that the implementation of HSRP was accompanied by an increase in the number of some rare birth complications. It seems that in order to promote vaginal delivery, alongside the goals of HSRP, more attention should be paid to women’s knowledge of assisted vaginal delivery- e g, vacuum extraction.