Lamotrigine is used for the treatment of seizure and bipolar depression (1). Lamotrigine prevents the opening of voltage-gated sodium channels and weakens the excitatory neurotransmitters’ release. Lamotrigine overdose can delay inter-ventricular conduction. It can culminate in the prolongation of QRS, QTc (QT corrected), and R waves (2). Data regarding lamotrigine overdose is scarce. Here, we describe a case with lamotrigine overdose, who developed Accelerated Idioventricular Rhythm (AIVR). AIVR is characterized by three or more sequential monophasic beats. AIVR has a gradual onset and a slow end (1, 2). This condition has been reported with some drugs (halothane, desflurane, cocaine, propofol), electrolyte disturbances (hypokalemia and hyperkalemia), and cardiomyopathies, as well as after the resuscitation period (3).

A 26-year-old man was admitted to the hospital after the ingestion of one gram lamotrigine (10 tablets of 100 mg) in an attempt for suicide. He did not have any remarkable past medical history and known allergy to any drug. He had the habit of smoking. The patient was first taken to a medical center where he was intubated due to the decreased level of consciousness (deep coma). Then, he was transferred to our center. The patient’s vital signs at arrival to our center were as follows: Blood pressure: 83/41 mmHg, pulse rate: 52/min, O2 sat.: 99%, and BT: 36.8ºC axillary. The pupils were dilated and symmetric with a normal reaction to light. The examination of other systems was normal. As the patient’s blood pressure was undetectable when presenting at the first center, norepinephrine with a dose of 5 µg/min had been initiated after serum therapy with normal saline. Charcoal and sorbitol were initiated for the patient (40 grams every four hours). Pantoprazole was also administered as a stress ulcer prophylaxis. According to the initial laboratory results, the complete blood count was normal: Prothrombin time: 21.2, international normalized ratio: 1.3, partial thromboplastin time: 60, blood sugar: 106, creatinine: 0.7, aspartate aminotransferase: 18, alanine transaminase: 17, and alkaline phosphatase: 130, with normal bilirubin level and normal electrolytes (sodium, potassium, calcium, magnesium). The patient was admitted to the Intensive Care Unit (ICU). A brain Computed Tomography (CT) scan was performed, which did not reveal any pathologic findings. His chest radiography was normal, as well. The initial electrocardiogram (ECG) was normal in the emergency department. After 12 hours, his cardiac rhythm changed (Figure 1). The diagnosis of his ECC was the accelerated idioventricular rhythm. The patient’s rhythm reversed to normal after 30 minutes without any intervention. In the ICU, the patient’s vital signs normalized, and he did not need any vasoconstrictor or inotrope. In the second-day examination, the pupils showed normal sizes and were reactive to light. Finally, the patient was extubated two days after admission and discharged on day 4 with normal mental status and no disability. Lamotrigine overdose is scarce. Most previous cases presented with the central nervous system and cardiovascular symptoms (1). The main signs and symptoms, according to case reports, are the central nervous system manifestations and cardiovascular manifestations. According to a systematic review that studied lamotrigine overdose in 2018, the most common neurologic manifestation was a decreased level of consciousness, which varied from drowsiness to coma. Some patients experienced a seizure without a history of seizure. This was sometimes Status epilepticus (SE). Agitation, ataxia, nystagmus, hyperreflexia, and tremor were the other neurologic signs and symptoms (1). Our patient had neurologic symptoms, as his level of consciousness was decreased, and he was intubated due to the loss of consciousness. Ataxia and nystagmus could not be evaluated since the patient was first intubated and did not have any problem after extubation. Cardiovascular abnormalities were also found in the systematic review of lamotrigine overdose. Tachycardia was the most common cardiovascular presentation. Wide QRS (QRS width more than 100 milliseconds) was reported in patients with lamotrigine overdose; death has also been reported. A complete heart block is another cardiac manifestation of lamotrigine-only overdose (1). Our patient did not have any of these cardiac manifestations, but he developed a temporary accelerated idioventricular rhythm, which was resolved spontaneously after 30 minutes without any intervention. AIVR is typically seen throughout reperfusion therapy (thrombolytic therapy or percutaneous coronary intervention) after acute myocardial infarction. It is rarely seen in patients with absolutely normal hearts or structural heart disease (4). 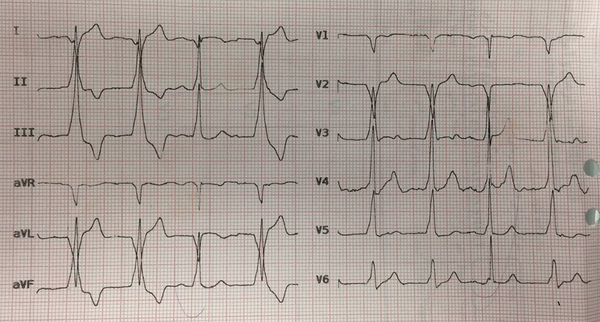 Vomiting and hypotension have been described after lamotrigine ingestion. The reported patient similarly had hypotension in the first hospital admission, which responded to norepinephrine infusion. The patient was normotensive after a few hours, and norepinephrine discontinued. Rhabdomyolysis and renal failure are rare complications of lamotrigine overdose (1). Our patient did not have any of these complications. Drug-induced Hypersensitivity Syndrome (DHS) and Drug Rash with Eosinophilia and Systemic Symptoms (DRESS) are also seen with lamotrigine. DHS is an idiosyncratic reaction manifesting with rash, fever, hepatitis, renal impairment, lymphadenopathy, and hematologic problems, e.g., atypical lymphocytes and eosinophilia (5). The half-life of immediate and extended-release lamotrigine is between 24 and 30 hours, although the enteric-coated form is absorbed more slowly (6). The peak plasma level of lamotrigine reaches 1.4 to 4.8 hours after oral administration (7). AIVR did not occur within the period that the peak plasma level reached, but it was before the first half-life of lamotrigine. Therefore, we did not find any explanation for the time that AIVR happened. We did not find any previous case of accelerated idioventricular rhythm due to lamotrigine overdose. Although accelerated idioventricular rhythm has not been previously reported with lamotrigine toxicity, ventricular tachycardia has been seen with lamotrigine.