Tacrolimus is an immunosuppressive drug broadly used to avoid rejection of tissue transplantation. Some studies suggest that tacrolimus has destructive effects on the male reproductive system due to activation of the renin-angiotensin system (RAS) and inflammation.

The present study aimed at determining the toxic effects of tacrolimus on testis and evaluating the blocking effects of captopril and losartan on angiotensin-converting enzyme (ACE) and angiotensin receptors, respectively, in rats.

The present experimental study was conducted on 36 adult male Wistar rats (weighing 200 ± 20 g) randomly divided into six groups and treated based on the experimental design for 30 days. At the end of the intervention, the rats were anesthetized and their blood samples were obtained to measure the serum levels of testosterone and ACE2 enzyme. Also, both testes were removed for histopathological examinations after scarifying.

According to the findings, the administration of captopril or losartan, along with tacrolimus, can decrease its testicular toxicity. Captopril and losartan act through blocking RAS but cannot improve ACE2 level; therefore, the recovery of testicle tissue might not be attributed to the ACE2 approach but to the anti-inflammatory effect.

Tacrolimus is a calcineurin inhibitor, which is an immunosuppressive drug, widely used to avoid tissue transplantation rejection and treat autoimmune diseases (1). Few studies analyzed the effects of tacrolimus on the male reproductive system; some indicate that tacrolimus can cause testicular weight loss, loss of epithelial thickness in seminiferous tubules (2, 3), decrease in the number of spermatocytes, and increase in the number of spermatids and spermatozoa with damaged heads and tails (3). According to evidence, the activation of the renin-angiotensin system (RAS) and inflammation can exacerbate the toxic effects of tacrolimus. In fact, sodium depletion activates RAS in a cascade way that may increase tacrolimus toxicity in the cardiovascular system in experimental models (4). Numerous tissues need RAS for activity. Evidence proves the presence of local renin-angiotensin in testicle, prostate, vas deferens, and seminal fluid; however, the role of RAS is still undetermined and needs more clarifications. There is also evidence that the local RAS affects tubular constriction, spermatogenesis, maturation of sperms, capacitation, acrosome exocytosis, and zygosis. There are several sites for the local RAS to interfere with the male reproductive system (5, 6). Hormones produced by testicles play a pivotal role in adjusting local RAS elements (7). Results indicate that local RAS has a subsidiary role in fertilization. This finding can be explained by the existence of blood-testis barrier and the drug entrance blocking effect of this barrier (5). The ACE2 is a regulatory enzyme in steroidogenesis, which exists in the ovary and testicle. It affects the reproductive system and the activity of germ cells (8). In the male reproductive system, ACE2 is selectively expressed by adult Leydig cells in testicles and produces angiotensinogen (1-7). Studies indicated that males with low serum levels of ACE2 confront severe disorders in spermatogenesis and reproductive system function (9).

A total of 36 adult male Wistar rats (weighing 200 ± 20 g) was provided by the Central Research Laboratory in Dezful University of Medical Sciences and assigned to six groups (n = 6). The rats were kept under standard conditions (a temperature of 25°C and a 12-12: hour light-dark cycle) for 30 days (10). The study protocol was approved by the Ethics Committee of Dezful University of Medical Sciences (ethical code: IR.DUMS.RFC.1396.25), and all the experiments were performed in accordance with the guidelines for the safe handling of animals.

The rats were anesthetized using chloroform and euthanized by bleeding from the heart. The serum samples were collected to measure the levels of testosterone and ACE2. Testosterone was measured by ELISA kits (Rat) (OKCA00179), based on the competitive enzyme-linked immunosorbent assay technique. ACE2 levels were measured by sandwich immunoassay technique with the rat angiotensin converting enzyme 2 (ACE2) ELISA kit (catalogue number: MBS 700969). Both testicles were fixed in 10% formalin buffer after dissection of overweight tissue. Eventually, the serial 5-6-µM testicle slides were prepared following the sectioning guidelines and stained with hematoxylin-eosin. Five slides were provided from each testicle in each group. Morphological and histopathological examinations included spermatogonia, primary spermatocytes, spermatids, and Sertoli and Leydig cells number. The epithelial thickness of seminiferous tubule was measured using a Dino-Lite Digital Microscope and the related software.

All the analyses were performed using SPSS version 16 (SPSS Inc., Chicago, Ill., USA). The within-group variation was analyzed by one-way analysis of variance. The Fisher least significant difference test was used to evaluate significant differences between the groups. P ≤ 0.05 was considered statistically significant.

Based on the obtained results, as shown in Table 1, testosterone reduced significantly in Tac rats, compared with the control group (P ≤ 0.05).

Table 1. Mean Levels of Testosterone and ACE2 in Rats a

As shown in Table 2, the number of spermatogonia in all groups was not significantly different from those of the control group (P > 0.05). The number of primary spermatocytes and Leydig cells significantly reduced in Tac rats, compared with controls (P ≤ 0.05).

Table 2. Means of Spermatogonia, Primary Spermatocyte, Spermatids, and Sertoli and Leydig Cell Number in Rats a

There was no significant difference in the number of primary spermatocytes and Leydig cells between the Tac + Cap and control groups, even though it was significantly higher than that of the Tac group (P ≤ 0.05). The number of primary spermatocytes and Leydig cells descended and elevated in Tac + Los and Tac groups, respectively, compared with the control group. The number of spermatids and Sertoli cells reduced significantly (P ≤ 0.05) in the Tac, Tac + Los, and Tac + Cap groups compared to controls. In comparison with the control group, no significant difference was observed in average testicle weight among different groups (P > 0.05) (Table 3).

Table 3. Means of Testis Weight, Diameter of Seminiferous Tubule, and Epithelial Thickness in Different Groups a 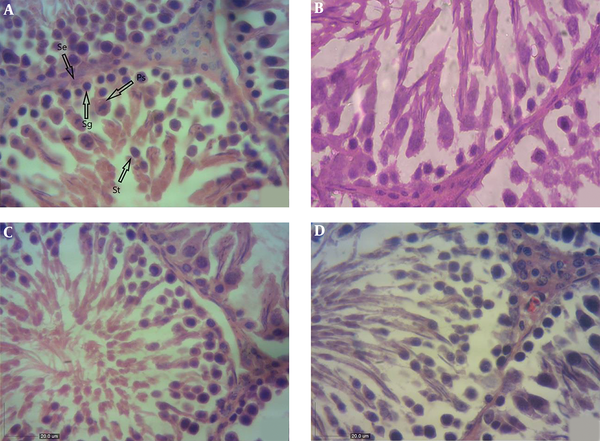 Based on the current study results, tacrolimus decreases ACE2 level, is responsible for testicular toxicity emerging by destructive effects on the testicle tissue, and decreases testosterone level. Simultaneous prescription of captopril and losartan could somehow lead to the recovery of testicle tissue and increased testosterone level, but not to improve ACE2 level; therefore, the recovery of testicle tissue may be due to ACE2 approach or anti-inflammatory effect of captopril.

The authors would like to acknowledge their gratitude to Dezful University of Medical Sciences for financial supports (grant No. 928).