Equity in the Distribution of Health Resources: A Case Study in Southeast Iran

Equity in the distribution of equipment and resources in the health sector constitutes one of the main dimensions of justice, improving health status and increasing people's satisfaction.

The current study aimed at determining how health resources and bed are distributed in the poorest region of Iran.

The current retrospective, cross-sectional study was performed in Sistan and Baluchistan Province, as the poorest region of Iran, in 2020. Data were collected using a standard checklist from all five health centers affiliated to Zahedan University of Medical Sciences (ZAUMS). Excel and STATA software were used for data analysis; the Gini index was also calculated.

The distribution of most resources in the poorest region of Iran was not fair. Unfair distribution and disparities can affect population health status in the future. Then, it is suggested that health policymakers and managers pay more attention to deprived regions.

The unfair allocation of health resources is not a problem specific to any given area rather a global issue. For instance, fair health resources allocation is considered the most important aspect among the health assessment indicators used in more than 30 European regions. In addition, studies in many developing countries (e.g., Thailand, Vietnam, Bangladesh, and India) reported that health resources are unfairly allocated to regions and distributed among people of different ethnicities and income groups (6). Inequality in health is a general term used to show the current differences, changes, and inequities for individuals or groups in access to healthcare services. Injustice in healthcare includes inequities that are unfair or created due to certain mistakes (7). In this regard, the World health organization (WHO) also highlighted the necessity of consideration for the fairness principle in the allocation and distribution of health equipment and resources. Equitable distribution is one of the leading indicators in the evaluation of health systems (8).

According to the WHO reports and rules, access to healthcare services and medical treatment is among the key elements of human rights; many nations consider it as critical rights. Due to the importance of this matter, some countries include these rights in their structures and constitutions. Results of a published paper demonstrate that healthcare services and social security are public rights, and governments should provide and supply these facilities to all community members. Although equal access to healthcare services is an essential right worldwide, inequality in the geographical distribution of health resources is the main obstacle to fair access to it. Developing countries face shortages in health experts, context information, and health planning, and most of the equipment and resources are allocated unequally (9).

Considering the above contents, the importance of the fair distribution of health resources, and limitations of studies conducted in this field in deprived areas, the current study aimed at determining how health resources (human resources and hospital beds) are distributed in the poorest region of Iran.

The current retrospective, cross-sectional study was performed in 2020 in Sistan and Baluchestan, the largest and most deprived province of Iran (10, 11). This province, in Southeast Iran, has a population of about 2.9 million. From the socioeconomic aspect, the province is among the poorest regions in Iran (12, 13). In the current study, all distributed health resources at health centers affiliated to Zahedan University of Medical Sciences (ZAUMS) (i.e., Zahedan, Mirjaveh, Khaash, Saravan, and Sib va Sooran) were investigated. A researcher-made checklist was used for data gathering. It was designed based on the study objectives, including total population, the number of midwives, rural health workers, urban health workers, nutritionists, and psychological consultants, general practitioners and specialists, and active beds. The validity of the checklist was confirmed by seven experts. The data were collected by referring to the Health Deputy (the collected data included the number of midwives, health workers, general practitioners, nutritionists, and psychological consultants) and Treatment Deputy (specialists, nurses, and active beds) at ZAUMS. The collected data were imported into Microsoft Excel for analysis. Then, analytical information was extracted as figures and tables. Moreover, STSTA software was used for Gini coefficient calculation. Gini coefficient measures the inequality among frequency distribution values. In economics, the Gini coefficient is a measure of statistical dispersion intended to represent the income inequality or wealth inequality within a nation or any other human group. The extreme cases are the most equal society in which every individual receives the same income (G = 0) and the most unequal society where an individual receives 100% of the total income and the remaining N − 1 receive none (G = 1 - 1/N) (14).

The current study was approved by the Ethics Committee of ZAUMS (ethical code: IR.ZAUMS.Rec.1397.454).

The number of human resources and active beds at ZAUMS is presented in Table 1.

Table 1. The Number of Human Resources and Active Beds in Health Centers Affiliated to ZAUMS

Based on Table 1, Zahedan and Mirjaveh had the highest and lowest populations, respectively. According to the obtained results, Zahedan, as the center of the province, had maximum per capita health workers for the population; however, the lowest ratio was observed in Sib va Sooran. The number of nutrition consultant in Zahedan was more than other regions; however, in Saravan, there were only two nutrition consultant. The distribution index of psychological counselors to the population in Zahedan and Mirjavah was more than the other health networks; however, the lowest ratio was observed in Saravan. According to the findings, the highest ratio of active beds to population was in Zahedan (1.4 beds per 1000 population) compared to other cities; however, it was at lowest in Khash (about 0.8 beds per 1000 population). This index in Sib va Sooran was not calculated due to the unavailability of data. General practitioners distribution based on the population in Mirjaveh was appropriated (0.9 per 10,000 population); however, it was at lowest in Khash (0.1 per 10,000 general practitioners). Other indicators are shown in Table 1.

The Gini coefficient for the distribution of ZAUMS human resources is shown in Table 2. 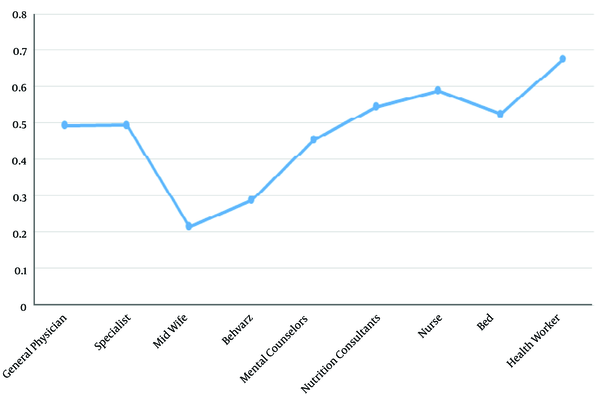 The present study aimed at determining health resources distribution in the poorest region of Iran. The obtained results demonstrated that health resources in the province were not distributed equally. Mohammadbeigi et al. (7), in their study, confirmed disparities in health allocation in Iran and stated that the government health plans, including family physicians and rural insurance programs, are implemented to reduce disparities. Also, Tao Zhang et al. (1), indicated inequities in the distribution of health resources. Liu et al. (5) found that despite improving health resources allocation in China, the internal disparities within the Eastern region still had a huge impact on the overall equity in this regard. The unfair distribution of healthcare services in this region might be rooted in historical deprivations remain, the wideness of the province, the lack of population density, etc. Although after the Islamic revolution, various healthcare plans are administered in this province, including health system transformation, development of medical sciences universities and colleges, the active presence of physicians and healthcare personnel in the most remote areas, increased number of state hospitals and hospital beds, and development of infrastructures, there are still many shortages and deprivations.

Based on the current study findings, the distribution of specialist and general practitioners were unfair and relatively unfair, respectively. This can be due to the deprivation, low gravity to sustain manpower, and the lack of manpower recruiting programs in these regions. Low numbers of volunteers to work in deprived and remote areas, along with the wideness of the province, are other reasons.

According to the results, the distribution of active beds was unfair (Gini coefficient: 0.526). Chavehpour et al. (15), reported in their study that the Gini indices for hospital beds were greater than 0.55 in Iran. Despite the increase in the number of hospital beds in Iran in recent years (15, 16), the figure is lower in this region than the national average. According to a study, the province has the lowest ratio of hospital beds per capita (less than 1 per 1000) (17). The reason is probably the low number of hospitals in the region.

The distribution of nutrition consultant was unequal (Gini coefficient: 0.545). It is noteworthy that a plan for absorbing nutrition and psychological consultants is launched in recent years.

The distribution of rural health workers was fair (Gini coefficient: 0.287). It should be noted that with the establishment of health centers in Iran since 1986, health workers provide health services in every village, and now the majority of villages in the country have health house and health workers even in remote areas.

The distribution of urban health workers and nurses was not fair (Gini coefficient: 0.675). Zhang (1) found that the distribution of health workers in the primary care sector was slightly in a higher level of Gini coefficients in China (~0.45). Also, health facilities in cities in some areas, especially on the outskirts, did not meet the population needs due to the migration of people from rural to urban areas in recent years.

Study limitations: We faced with few missing values for some cities in last years, and then we decided to analyze the available most recent data (data for 2020) instead to provide a time trend inequality meausres.

The authors wish to thank the Student Research Committee at ZAUMS.