To investigate the articles on the sub-assemblage of Giardia intestinalis in Iran, a systematic search was conducted in Persian and English databases. The search process led to the entry of 23 articles into this systematic review. Also, in this study, to estimate the ratio of the dominant sub-assemblage of Giardia parasite in Iran, meta-analysis was used and a significant level of 0.05 was considered.

Given that assemblage A of Giardia Intestinalis has the highest prevalence in the human society of western half of Iran, in this area of the country, the main epidemiological pattern of Giardia transmission is zoonotic. However, to identify the source of this parasite spread, more studies are needed.

Giardiasis is a global disease caused by a flagellate protozoan called Giardia. The only pathogenic species of this parasite in humans is Giardia intestinalis (also known as G. duodenalis and G. lamblia). Although this disease is often asymptomatic, the most common symptom is diarrhea. The causative agent of the disease is resistant cysts, which are excreted from the host intestine and transmitted by oral-fecal, water, and food (1, 2). Thus, identifying the parasite's reservoir is very important to prevent it. 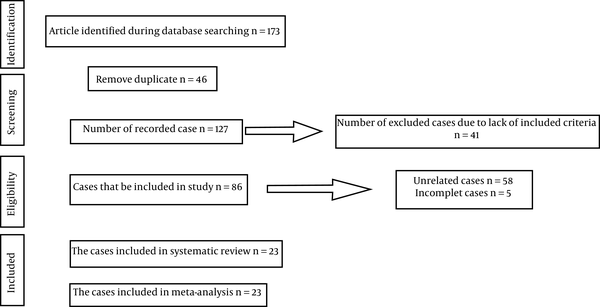 The following inclusion criteria were considered for this study. Full papers and dissertations related to determining Giardia genotypes based on different genes of this parasite, genetic characters’ and human Giardia genotype in Iran published from 1980 to 2020 were included in this work. In contrast, case studies, experimental studies, and animal studies, as well as duplicate articles were excluded.

Selected papers were carefully reviewed by two researchers and information, such as first author, year of publication, type of study, location of study, language, subjects, sample size, diagnosis test, assemblage or genotype detection technique, and genotype were extracted and recorded.

In this study, meta-analysis was used to estimate the proportion of dominant genotypes of Giardia parasite in Iran (7). Confidence intervals were also calculated using the exact binomial distribution. Further, publication bias was investigated using the Egger test (8). Heterogeneity among the studies was considered by benefiting from the Cochran’s Q test with a significant level lower than 0.1 and I2 statistic greater than 60% (9). Due to the observed heterogeneity, we used random effects model to estimate the prevalence of predominant genotype of Giardia parasite in Iran.

The meta-analysis of proportions was further performed by using “Metaprop” commands on STATA software (Ver.14). The significance level was considered as 0.05 (7). Freeman-Tukey double arcsine transformation was used in the random effects model when the proportion in some studies was very large and close to 100% (7). Additionally, a Forest plot was drawn based on the random effects model for the estimated proportion of assemblages with confidence interval of 95%.

After searching the databases, 173 articles were found related to the Giardia exploration in Iran. After excluding the unrelated and duplicated studies, a total number of 23 associated articles to the sub-assemblages of human Giardia intestinalis in Iran were included. Figure 1 shows the process of designing and searching for articles, and Figure 2 illustrates the geographical areas of the included articles (Figures 1 & 2).

Table 1. Extraction of Information About the Assemblage of Giardia Intestinalis from the Selected Articles

The results of statistical analysis to estimate the prevalence of A, B, as well as the mixed assemblages of Giardia Intestinalis in the Iranian population are as follows. 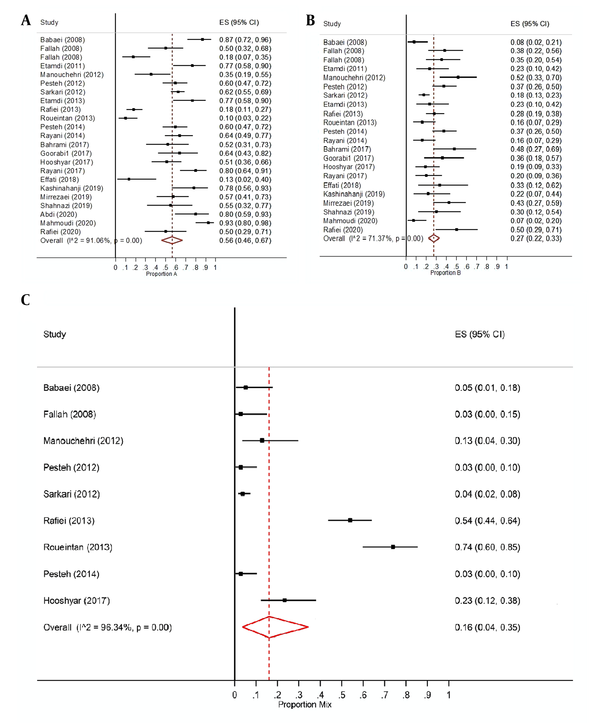 Forest plot based on the random effects model for assemblages of Giardia intestinalis in the western half of Iran. (A) assemblage A, (B) assemblage B (C) the mixed A and B assemblages

As noticed in Table 2, out of 23 selected studies, sub-assemblages of Giardia intestinalis have been presented in 16 studies.

Table 2. Extraction of Information About Sub-assemblages of Giardia intestinalis from the Reviewed Articles

Results of statistical analysis are presented below to estimate the proportion of sub-assemblages A, B, and mixed of Giardia intestinalis in the population of the western half of Iran. 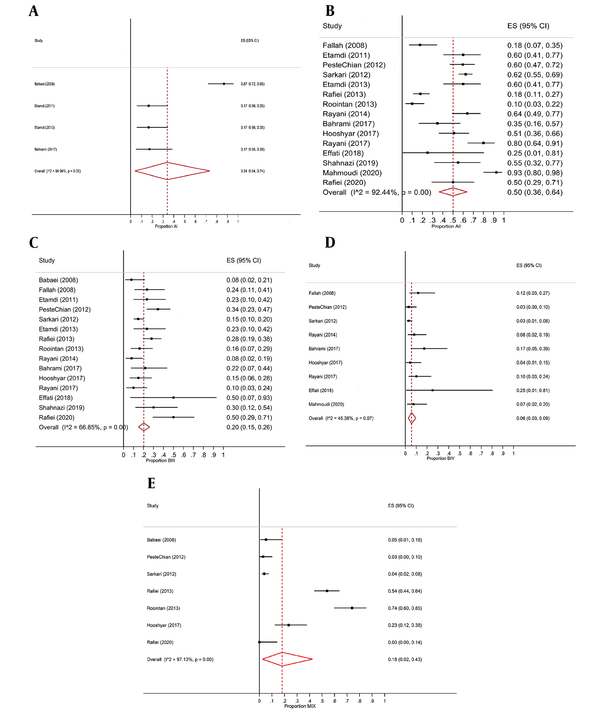 Forest plot based on the random effects model for genotypes (sub assemblages) of Giardia intestinalis in the western half of Iran. (A) AI; (B) AII (C) BIII (D) BІѴ (E) mixed A and B sub assemblages

Giardiasis is one of the most important health problems worldwide because the parasite that causes this disease, Giardia intestinalis, is a gastrointestinal protozoan common among human, domestic, and wild animals (3, 5). Hence, the epidemiological study of Giardiasis is important to identify the host spectrum of different species of this parasite as well as its assemblages, sub-assemblages, strains and genotypes. On the other hand, such studies, if performed using molecular methods, will help us improve our understanding about the zoonotic transmission potential of animal’s Giardia species and to determine how many cases of human Giardiasis have animal source (3). Although being sporadic, molecular taxonomic studies can also clarify the relationship between the parasitic and its host genotypes, pathogenesis, and clinical symptoms (33).

Also, different species of Giardia parasite have different hosts. Currently, six species of this parasite have been recognized by researchers. Of these six species, only Giardia intestinalis (also known as Giardia lamblia and Giardia duodenalis) could infect humans and many other mammals. Studies have shown that these species of Giardia have the widest range of hosting and the greatest health importance (34). The results of epidemiological and genotypic studies have also confirmed the possibility of zoonotic transmission of Giardia intestinalis (33).

Study on allozymes has further shown that all human isolates of Giardia intestinalis belong to two genetic assemblages (A and B) each of which contains at least four genetic clusters or sub-assemblages (I to IV). On the other hand, both of these assemblages are zoonotic whose examination can help us track the source of infection (35). Further, in Brazil, the findings of two separate studies showed that in communities, where people care for pets, humans and animals (especially cats) could become infected with Giardia assemblage A. In such communities, there seems to be the possibility of cross-transmission of this parasite between animals and humans (36, 37). Another study in Poland verified assemblage A in Giardia infected cats (38). Research works in Mexico, Spain, and Jamaica approved the same assemblage of Giardia intestinalis (A) in dogs that had close connection with human (39-41). Furthermore, a study conducted to determine the sub-assemblage of Giardia duodenalis in livestock of Urmia, Iran showed that the predominant assemblage among the livestock of this city is type E, which is not zoonotic (42). Similar results were obtained in other studies conducted on Arabian horses, and ruminants in Ahvaz and Yazd province, Iran, respectively (43, 44). As well as studies performed in Turkey on horse and cattle (45, 46).

As the results of this systematic study showed, prevalence of assemblage A of Giardia Intestinalis with estimated of 0.56 is the dominant assemblage in the human society of western half of Iran. By comparing Giardia sub-assemblages in animals and humans, it can be concluded that in mentioned region of Iran zoonotic transmission of this parasite from livestock and pets is very scarce. In contrast, a general comparison between the prevalence of Giardia in this region of Iran, Brazil, Mexico, Spain, and Jamaica suggested that the source of contamination in these countries may be stray domestic animals, including cats and dogs (36, 39-41). Currently, the large number of stray cats and dogs are the most important urban problems in Iran. These animals can be involved in the transmission and spread of a number of zoonotic parasitic infections including Giardia. Works on the prevalence and genotype determination of Giardia in Iranian domestic animals is so little that we had to report results of the only study in this field in Iran, which showed that the prevalence of Giardia duodenalis in cats in Ahvaz was 2% and 3.33% by microscopic method and immunochromatography assay, respectively (47).

Moreover, studies in other countries showed that assemblage A of Giardia intestinalis had the most possibility of zoonotic transmission since it is the most common species of this parasite in animals and it also lacks a specific host. It should be also noted that humans are usually infected with genotype AII, while animals are often infected with type AI (34). Results of three studies conducted in Iran to determine the genotypes of the Giardia duodenalis in animals also showed that although the predominant assemblage of the parasite in these animals is of category E, a number of these animals were infected with assemblage A and genotype AI (42-44). Thus, it would be likely that the source of zoonotic transmission of Giardia is not livestock (cattle) and horses and there might be other animals responsible for this transmission in Iran.

The results of determining assemblage of Giardia in two neighboring countries of Iran showed that the dominant assemblage in Saudi Arabia and Turkey were A and B, respectively (4).

In addition, the association between the genotypes of the Giardia intestinalis and clinical symptoms was investigated in a human experimental study. The results showed that the clinical signs of Giardiasis appear only in people infected with the GS / M isolate of the parasite. This insolate belongs to Assemblage B of Giardia (3, 33). Further, results of this study led to a theory stating that pathogenesis of parasite changes with variation of parasite strain. Results of animal experimental studies also reinforced this theory (3, 33). Moreover, a study on the infected Egyptian school children confirmed the symptoms of Giardiasis appeared in patients with Assemblage B of Giardia (48). A similar study in Cuba also confirmed the same assemble (B) (48, 49).

In Iran, several studies have been performed to investigate the relationship between Giardia genotype and the presence or absence of clinical signs. For example, Rafiei et al. showed that the predominant genotype of Giardia in Ahvaz is AII and BIII, but no significant difference was observed between the presence/absence of symptoms and the incidence of these genotypes (17). In another study by Etemadi et al., patients with assemblage A suffered from milder symptoms (mild diarrhea) than those with assemblage B (13).

On the other hand, according to the findings of the current study, it seems that in most studies that have been performed to determine the genotype of Giardia parasite in Iran, in fact, sub-assemblages the parasite were identified and reported.

To achieve more accurate results in Iran and have the possibility for better comparisons with other countries’ studies, it is necessary to conduct more comprehensive studies in different parts of Iran regarding the prevalence and genetic characteristics (assemblage, sub-assemblage and genotype) of Giardia intestinalis in humans, livestock, and pets.

Taking into account all the above-discussed studies, it is obvious that the epidemiological transmission pattern of Giardia intestinalis in Iran is zoonotic transmission. However, it seems important to determine the genetic characteristics of the parasite in order to discover the source of contamination in human societies. Therefore, to reduce the risk of this disease transmission from animal to human (zoonotic), revision of treatment, prevention and control guidelines of this disease in cats and other pets is a priority. On the other hand, the results of the current study shed new light on the prospects and opportunities for future research in the field of epidemiology and genetics of this parasite. Hence, we recommend researchers to use the results of this systematic study to identify areas of Iran that need research in the field of genetic and epidemiological studies of Giardia.

This study was conducted as a systematic review and meta-analysis at Arak University of Medical Sciences and did not require funding, so it lacked financial support. The authors would like to appreciate those who provided the opportunity to implement the project.

Copyright © 2022, Author(s). This is an open-access article distributed under the terms of the Creative Commons Attribution-NonCommercial 4.0 International License (http://creativecommons.org/licenses/by-nc/4.0/) which permits copy and redistribute the material just in noncommercial usages, provided the original work is properly cited.
download pdf 2.02 MB Get Permission (article level) Import into EndNote Import into BibTex
Number of Comments: 0