Ventral Pelvio-anal Reconstruction as a Variation of established Surgical Management of Severe and Refractory Fecal Incontinence: A Case Series Study

Conventional treatments may not be effective in some severe cases of fecal incontinence (FI).

In the present study, we evaluated the applicability of ventral pelvio-anal reconstruction (VPAR) as a modified operative technique for 17 patients with severe and refractory FI.

We performed VPAR by placing a mesh in the perineum and securing it at the sacrospinal ligament on both sides. The Cleveland Clinic Incontinence Score (CCIS) and Fecal Incontinence Quality of Life (FIQoL) questionnaires were completed by the patients, and anorectal manometry was performed before and after the operation (3,6 and 12 months), and the results were compared against the baseline values.

The operation was successful in all patients; no mesh was explanted during the follow-up period, and all patients reported satisfactory outcomes. Postsurgical anorectal manometry showed an increase in both rest and squeeze pressures. The CCIS decreased while the FIQoL increased significantly during the first-year follow-up (P < 0.001).

By incorporating the implant into the perineal body, we hypothesized that our combined technique would lead to favorable outcomes, and the preliminary results confirmed this. Further studies with larger patient populations and more extended follow-up periods are needed to confirm our satisfactory results and conclude that the VPAR approach is a safe and appropriate therapeutic option for patients with severe and refractory FI.

This study included 17 consecutive adult patients (age ≥ 18 years) with refractory FI (unsuccessful treatment history) who were presented to the KEM Evang Clinic Essen-Mitte gGmbh, Henricistrasse, Essen, Germany, and Krankenhaus Maria-Hilf Hospital, Diesemer Bruch, Krefeld, Germany between June 2018 and June 2020. Patients with current colorectal or elsewhere malignancies, inflammatory bowel disease, rectocele, and pelvic septic disease were excluded. Following a detailed medical history and a thorough proctologic anorectoscopy and colonoscopy examination, as well as endoanal sonography, patients’ demographics (age, sex, and race), type of delivery (women), etiology of FI, previous treatments received, length of hospital stay [LOS], minor and major complications, and the results of follow-up examination were recorded. At each visit, including baseline (before surgery) and each follow-up visit, a physician interviewed the patients and completed the Cleveland Clinic Incontinence Score (CCIS) and Fecal Incontinence Quality of Life (FIQoL) questionnaires. Manometry was performed at the baseline (before surgery) and each follow-up visit. 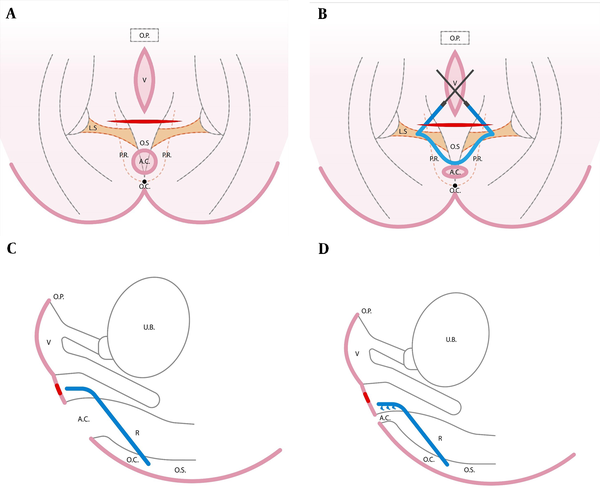 The Median LOS was 4 (range: 3 - 5) days, and none of the patients had major complications. The only minor complication occurred in one patient who developed swelling and erythema of the perineal wound three days after surgery. She received antibiotics and antipyretics, and no implant had to be removed.

The median follow-up time was 12 months (12 - 15 months). At the last follow-up session, the surgeon reported that the operation was successful in all patients. None of the patients reported any functional complications, such as obstructed defecation or dyspareunia. There were no erosions, extrusions, migrations, or complications attributable to the mesh. 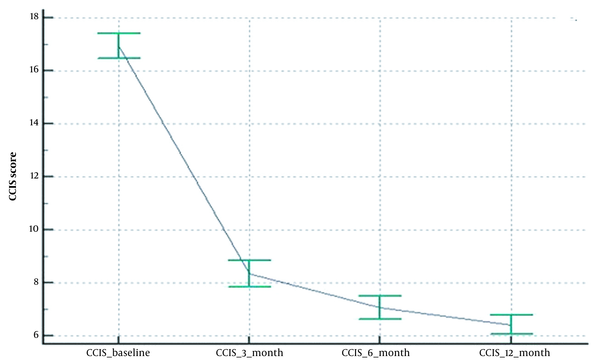 Mean Cleveland Clinic Incontinence Score (CCIS) at baseline (before) and 3, 6, and 12 months after surgery. 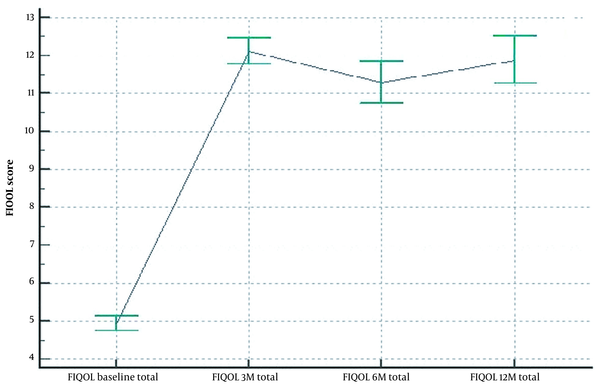 Mean scores of Fecal Incontinence Quality of Life (FIQoL) at baseline (before) and 3, 6, and 12 months after surgery.

The present study introduced a novel combination of surgical procedures for patients with fecal incontinence (FI). Although several treatment options are available for FI, non-operative interventions can only alleviate the symptoms without addressing the underlying mechanisms. Surgery is generally the preferred intervention-especially in patients with severe FI- and includes a variety of procedures such as anal sphincter repair, sphincter replacement, SNM, and bulking agents, which are selected according to the pathophysiology of the disease (6, 8). A network meta-analysis on 37 treatment strategies proposed for patients with (severe) FI showed that SNM and zinc-aluminum had a positive impact on FI and FIQoL scores. Nevertheless, other studied treatment strategies did not alter FI frequency, resting, and squeeze pressures; some (such as radiofrequency) even resulted in more adverse outcomes than the placebo (9). Therefore, the question arises as to what would be the best decision if a patient has contra-indication for these interventions or does not comply with them or respond to them.

According to the guidelines, the SNM procedure, as the first-line treatment for all FI patients with or without sphincter defects (10), demonstrated encouraging long-term outcomes, even in patients with refractory FI (11). Improvement of an impaired sphincter function (targeting the sacral nerve root by implantation of the stimulating electrode) using the SNM procedure has led to encouraging long-term results in several cohort studies (12, 13). This method has also been validated as an effective procedure in patients with refractory disease and poor response to other treatment options (11). However, the management of patients who do not respond to SNM remains a significant challenge. In the present study, most patients had received either peripheral nerve evaluation or SNM with no response to either. The rest of the patients had low compliance with these treatments and thus underwent sphincter replacement surgeries such as ABS, dynamic graciloplasty, and MSA. A recent study showed that many patients who underwent ABS required re-operation (due to infection and device failure), and only 35% had achieved continence at the end of the cohort (five years) (11, 14). Notably, the management of patients with refractory conditions remains a challenge (15). The results of the present preliminary study showed that the combined procedure might be considered an effective therapeutic method with a significant impact on patients’ FIQoL, CCIS, and rest/squeeze pressures when SNM and other treatments fail to improve patients’ conditions.

Considering the fact that the injury to the anal sphincters is a frequent etiology of FI (as also observed in the present study), other surgical approaches have been proposed for the reconstruction of the pelvic floor integrity and stabilization of the perineal body and anal sphincters/canal. Nevertheless, these procedures (such as sphincteroplasty) have a high long-term relapse rate (16, 17). Considering the association of relapse with tension, some surgeons have proposed using Prolene mesh in sphincteroplasy as a novel tension-free technique (18). Total pelvic mesh repair (TPMR), which uses mesh to secure the perineal body to the sacrum, has also been recommended for patients with FI caused by pelvic floor prolapse (19). The transobturator post-anal sling (TOPAS) has also been utilized to modify the anorectal angle in FI patients by means of insertion of a mesh lateral to the puborectalis muscle and inferior to the anorectum. Besides the common complication of pain and incision site infection (> 5%), no mesh erosions, extrusions, organ perforations, bowel obstructions, or device revisions have been reported in this procedure (20). In addition, suturing the puborectalis sling between the anorectum and vagina to increase the anorectal angle has been proposed for reconstruction and reinforcement the pelvic floor; however, these procedures are not widely accepted because of the long-term adverse outcomes (21).

Most available guidance on using mesh in colorectal surgery lack high-quality data derived from randomized clinical trials, contains significant heterogeneity in the indications, and failed to report complications (22). Nevertheless, except for one minor adverse outcome (local inflammation), we observed no complications in the present study. Aware of the controversy surrounding using mesh in pelvic floor surgery, we performed VPAR in patientsat in the final stages of the management (although none had undergone colostomy). Therefore, long-term follow-up is needed to confirm the safety and efficacy of this surgical intervention.

Some notable limitations of the present study were the small number of participants who were not randomly selected, their inclusion only from one medical center, the lack of a control group for comparing the results, and the short duration of follow-up. However, these limitations stem from the fact that what we report is the primary outcomes of a combination of previously-established surgical techniques.

The authors thank Herald Abcarian, Paul-Antoine Lehur, Johannes Jongen and Janet DeMarchi for their help in preparing the manuscript.

Copyright © 2022, Author(s). This is an open-access article distributed under the terms of the Creative Commons Attribution-NonCommercial 4.0 International License (http://creativecommons.org/licenses/by-nc/4.0/) which permits copy and redistribute the material just in noncommercial usages, provided the original work is properly cited.
download pdf 1.63 MB Get Permission (article level) Import into EndNote Import into BibTex
Number of Comments: 0