Laparoscopic ovarian drilling (LOD) is recommended for the treatment of women with polycystic ovary syndrome (PCOS) resistant to clomiphene citrate.

This study aimed to evaluate the effect of ovarian drilling on the serum levels of anti-mullerian hormone (AMH), androgens, and the number of antral follicles.

This was a pre- and post-clinical trial performed on 30 infertile women with PCOS resistant to clomiphene citrate. Patients underwent standard laparoscopic ovarian drilling. Serum levels of AMH and androgens and antral follicle count (AFC) were surveyed before LOD and three and six months after LOD. The ovarian ovulation rate in each month was also monitored for six months. Then, the association between changes in these parameters, especially the level of AMH, and postoperative ovulation was investigated. A P < 0.05 was considered statistically significant.

It may be possible to use the changes in AMH and AFC to predict the success rate of LOD.

Polycystic ovarian syndrome (PCOS) is the most important cause of declined/absent ovulation in infertile women, as it affects about 18.4% of women at the reproductive age (1). This complication was initially recognized by increased androgen adrenal and ovarian secretion, irregular menstruation, fibrous and large ovaries, increased primary and preantral follicles, disruption of dominant follicles, and hirsutism. However, today, it is recognized as a disorder with multiple causes and metabolic consequences that increase the incidence of metabolic syndrome (2).

The important characteristic of PCOS is the increased number of follicles in all stages of growth. The AMH levels are 2 - 4 times higher in patients with PCOS than in healthy women. It was initially thought that AMH increases due to the increased number of pre-antral and small follicles, but today it has been shown that granulosa cells produce AMH up to 75 times in PCOS women with abnormal ovulation and up to 20 times in cases of normal ovulation compared to healthy people (4).

Various drugs are used to treat infertility in PCOS. One of these drugs is clomiphene citrate (CC) that causes 70% - 80% of patients to achieve ovulation (5). However, some PCOS patients are resistant to clomiphene and will not ovulate despite multiple drug administrations. Therefore, in resistant cases, the use of invasive therapies is proposed to induce ovulation. One of these methods is laparoscopic ovarian drilling (LOD), which has become important in recent years due to the complications of drug therapy and resistance to drugs (6). The most important indications of LOD are therapeutic resistance to clomiphene in cases of ovulation failure in PCOS, and it is a substitute for gonadotropins (5, 6).

The purpose of this study was to determine whether preoperative AMH values can be used to determine the antral follicles count to predict the likelihood of ovarian drilling success in clomiphene-resistant PCOS.

This study was a pre- and post-clinical trial for one year that enrolled 30 patients. The study was performed after obtaining approval from the Ethics Committee of Mashhad University of Medical Sciences (IR.MUMS.fm.REC.1394.214) and registering on IRCT (IRCT20141230020486N4). We enrolled all 20 to 35-year-old infertile women with clomiphene-resistant polycystic ovaries referring to the Women Clinic of Imam Reza Hospital and Milad Infertility Center, affiliated to Mashhad University of Medical Sciences. The participants met the inclusion criteria and were enrolled after receiving a full description of the study and giving informed consent.

The inclusion criteria included: (1) non-pregnancy after two years of using non-contraceptive methods; (2) polycystic ovary syndrome based on the Rotterdam criteria (7, 8); (3) resistance to clomiphene evidenced by a failure to respond to at least six courses of clomiphene treatment; (4) age of 20 to 35 years; (5) spouse’s normal spermogram; (6) normal hysterosalpingography; and (7) satisfaction with participation in the study. The exclusion criteria were: (1) patients’ dissatisfaction to continue cooperation at each stage of the study; (2) failure to follow up the patient; and (3) observing endometriosis or any other pelvic pathology in laparoscopy.

The diagnosis of PCOS was based on meeting at least two of the three Rotterdam criteria: (1) amenorrhea or oligomenorrhea and chronic non-ovulation; (2) clinical or laboratory evidence of hyperandrogenism; and (3) ultrasound evidence of polycystic ovary before starting treatment. Androgenic tests, AMH, and transvaginal ultrasound were performed on the third day of the cycle to count the number of antral follicles, and the results were recorded in a questionnaire. In patients with irregular cycles, the menstrual cycle was first created by the administration of 200 mg progesterone, and then, tests and sonography were performed on the third day of the cycle. Ultrasound for all patients was performed by a single radiologist. The patients’ demographic characteristics and primary paraclinical information were recorded by a questioner in the questionnaire (based on patient interview and information in the case file).

Ovarian drilling was performed with a standard method in the Women Operating Room of Imam Reza Hospital by a gynecologic laparoscopy fellowship. For the procedure, all patients underwent general anesthesia, and laparoscopy was performed in the lithotomy position with Olympus Laparoscopy. Then, the triple-puncture laparoscopy (with three trocars) was performed. In the case of any pathology in the pelvis, such as adhesion, endometriosis, etc., the patient was excluded.

To perform ovarian drilling, the utero-ovarian ligament was first taken with an atraumatic grasper, and ovaries were kept away from the intestines. Then, each ovary was drilled with a 4 mm monopolar needle electrode (with a straight needle) with 600 joules of energy (four dots per ovary, each for five seconds or five dots per ovary, each for four seconds at 30 volts) with a Vallylab generator. Then, three and six months after surgery (or until pregnancy if occurred earlier), the serum levels of AMH, androgens (testosterone and DHEAS), and antral follicles count were examined on the third day of the cycle and compared with the preoperative values.

Blood samples were taken after 10 hours overnight fasting on the third day of the menstrual cycle. Testosterone was measured by Radioimmunoassay (Immunotech, Beckman Coulter, Czech Republic). The AMH and DHEAS levels were measured by the Enzyme-linked Immunosorbent Assay (ELIZA Kit/AMH MIS HBMG, DRG Instrument, Germany). Similarly, the ovulation rate was recorded by serial transvaginal ultrasound from the third day of the cycle until ovulation was completed every month for six months after ovarian drilling (or until the ovulation period if occurred earlier). Then, the AMH changes and the antral follicles count and androgens were compared in patients with and without ovulation.

A t-test was used to examine the relationship between quantitative variables in two groups if the data distribution was normal. Otherwise, nonparametric corresponding tests were used. The chi-square test was used to examine the qualitative variables. For statistical analysis, SPSS V. 16 software was used. A P < 0.05 was considered statistically significant.

Table 2. Changes in Anti-Muller Hormone, Testosterone, DHEAS, and Antral Follicles Before, Three and Six Months After Ovarian Drilling in Patients with and Without Ovulation 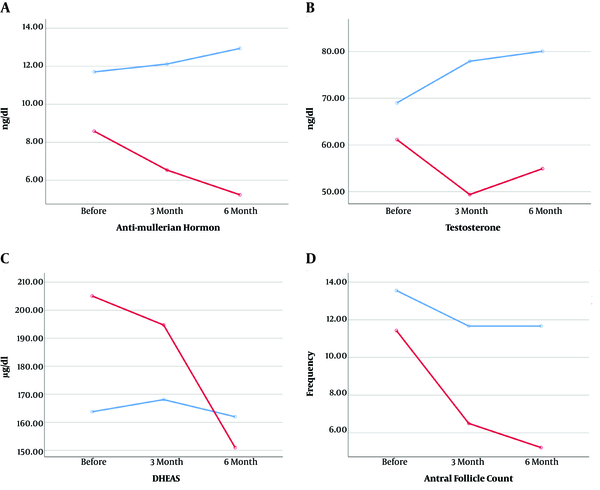 Comparison of AMH (A), testosterone (B), DHEAS (C), and antral follicles (D) changes before, three, and six months after ovarian drilling in patients with ovulation (red line) and without ovulation (blue line)

Table 3. The Trend of Changes in Antimululin Hormone, Testosterone, DHEAS, and Antral Follicles Before, Three and Six Months After Ovarian Drilling in Patients with and Without Pregnancy

Various studies have suggested the superiority of LOD outcomes over other treatments, including the use of CC for ovulation induction and pregnancy (7-9). However, resistance to CC is recognized as the most important indication of LOD (5, 6). The evaluation of AMH as a factor affecting the success of interventional treatment with LOD was questionable until recently, when some researchers reported a reduction in AMH after PCOS treatment (3). Other researchers evaluated the role of LOD in reducing AMH more precisely and suggested that the serum level of this hormone is beneficial in the diagnosis of PCOS (10).

In our study, a significant reduction was observed in the serum levels of AMH three and six months after LOD compared to preoperative levels. However, Farzadi et al. found no significant correlation between LOD and reduced serum levels of AMH in Iranian women (11). Amer et al., in a study of 29 women with PCOS at the mean age of 28.4 years, observed a significant reduction in AMH plasma levels three months after LOD compared to preoperative levels. However, the mean hormone levels showed a slight increase six months after the intervention, but in general, they were lower than the pre-interventional levels (12). Elmashad found similar results in a study on 20 women with the mean age range of 27.4 years (13). A study by Köninger et al. found that during pregnancy, the serum levels of AMH decrease, which is due to the inhibition of ovarian function. Moreover, AMH does not indicate ovarian reserve during pregnancy and does not appear to be related to the gestational age, but its levels are lower in pregnant women aged 35 or over (14). In our study, pregnancy occurred in six (20%) patients after LOD and although the mean serum level of AMH decreased by the third month of surgery, no statistically significant difference was observed, which can be due to the low sample size.

Researchers have shown the increased serum testosterone level during PCOS and its decrease after treatment with LOD (3, 15). Elmashad proved the association between this hormone and AMH in PCOS and the reduction of serum testosterone levels one week after LOD (13). During LOD, the holes developed in the ovarian stroma destroy androgen-producing tissues, leading to the decreased production of testosterone and increased FSH level. Meanwhile, inflammatory factors such as insulin-like growth factor-1 in response to tissue destruction caused by surgical site damage, the effect of FSH on folliculogenesis, and increased blood flow to the ovarian tissue can facilitate gonadotropin entry (16). In the present study, serum testosterone levels decreased three months after LOD compared to preoperative levels, but it was not statistically significant. The level of the hormone after six months was even higher than before the surgery (Tables 2 and 3). The results of this study are similar to Elmashad’s study in the third month while contrary results were observed in the sixth month.

As noted above, an increase in the serum levels of AMH during PCOS has been reported in various studies. Along with increased AMH, the small follicles count also increased in these individuals (18). The destruction of AMH-producing tissues and antral follicles may occur following LOD (11), which leads to their decreases. Recent studies suggest a positive correlation between serum levels of AMH and antral follicular count in ultrasound (19). Serum levels of AMH are provided by granulosa cells of 2 to 9 mm (60%) follicles that are counted as AFC in ultrasound. The evaluation of the serum level of AMH is even more sensitive than AFC because it reflects small and pre-antral follicles (less than 2 mm in diameter), which are difficult to see in ultrasound. Therefore, the serum level of AMH is a more accurate marker than AFC for developing follicles (3). Ultrasonographic studies showed a significant decrease in AFC after three months and six months of LOD. In both groups of pregnant and non-pregnant women, the number of antral follicles decreased, but there was no significant difference between the two groups.

Polycystic ovary syndrome is one of the causes of infertility in women. In patients with clomiphene resistance, LOD intervention can induce successful ovulation and pregnancy. In patients who ovulated after ovarian drilling, i.e., had a successful operation, AMH and AFC showed a significant reduction, but this did not apply to serum testosterone levels and DHEAS. Therefore, it may be possible to use postoperative changes in the levels of AMH and AFC as markers to predict the success rate of ovarian drilling in PCOS.

This paper was derived from a gynecologic residency thesis with registration number IR.MUMS.fm.REC.1394.214 and research project code 940057, funded by the Vice-Chancellery for Research of Mashhad University of Medical Sciences.