Acupuncture is as Effective as Exercise for Improvement of Chronic Neck Pain: A Randomized Clinical Trial

A randomized clinical trial was conducted in Rasool-e-Akram Hospital from September 2017 to October 2018. A total of 68 patients with CNP were randomized to receive either exercise therapy or acupuncture. Clinical outcome was documented at baseline, after 6 and 12 weeks based on the Neck Disability Index (NDI) and the Neck Pain and Disability Scale (NPDS).

In patients treated with acupuncture, mean NPDS and NDI values were 56.309 and 20.35, respectively. In patients undergoing physical therapy these values were 52.912 and 21.50, respectively. No significant difference in pain and function was observed between the two groups at the final follow-up (P > 0.05). Likewise, neck pain and function improved significantly in both groups at the follow-up points (P < 0.001).

In the patients with CNP and radicular neck pain, acupuncture and exercise therapy were equally effective on pain reduction and functional improvement.

Neck pain is a common disabling medical complaint (1). It is estimated that annually 30 to 50 percent of the adults experience it (2-4). Neck pain lasting more than 12 weeks is defined as chronic and is more common in women compared to men (1, 3, 5-7). Several therapeutic approaches such as pain relief drugs (non-steroids anti inflammatory drugs (NSAIDs), narcotics, etc.) and other non-medicinal treatments are considered for treatment of chronic neck pain (CNP). Massage, physical therapy, exercise therapy, local injection, and patient education (8-16) are the conventional therapeutic methods. There are strong evidences that confirm the beneficial effect of exercise therapy on pain and disability of the CNP (11-16). They advocate the strength and flexibility exercises of the cervical muscles as the cornerstone of the conservative therapy. In the recent decade, there has been an increasing tendency to use acupuncture as a complementary medicine for CNP patients. Reviewing the studies in this regard shows that not only the evidence of the effect of acupuncture is limited but also some studies have demonstrated that acupuncture was not significantly different from sham needle insertion. It is emphasized in the literature that further well-designed studies are required in the subject (17-25). Several studies have evaluated the effects of acupuncture or exercise on non-specific CNP, while the evidence for the efficacy of exercise on radicular neck pain is inconclusive (26-28). Unfortunately, in Iran patients with radicular CNP are usually recommended to avoid getting any type of exercise.

Considering the controversy in the effectiveness of acupuncture we designed a randomized trial involving patients with CNP to investigate whether acupuncture is more effective than exercise therapy in treating CNP with or without radicular pain.

This study was a single-blinded randomized clinical trial with 1- and 3-month follow-ups. The clinical evaluation and treatment were performed at a university hospital in Tehran. This study was approved by the Ethics Committee of Iran University of Medical Science (93-02-30-24400-103949). All the participants provided informed consent. The trial was registered in the Iranian Registry of Clinical Trials (IRCT201203074409N2).

Considering the effect size of 0.4 in the previous study (25), the sample size was calculated based on an assumed study power of 80% (β = 0.2) and a false- positive rate of 5% (α = 0.05). Using these parameters, and adjusting α for multiple comparisons, as well as including the possible loss of 25% of the samples through the study, we required at least 30 patients in each group.

Advertising posters were put up in several university hospitals for recruiting the patients with CNP. A total of 93 volunteer patients came forward and were evaluated by a sports medicine specialist. CNP was diagnosed via clinical assessment and cervical magnetic resonance imaging (MRI) for ruling out other causes and confirming the diagnosis. Of the 93 patients, 75 were included in this study (Figure 1). 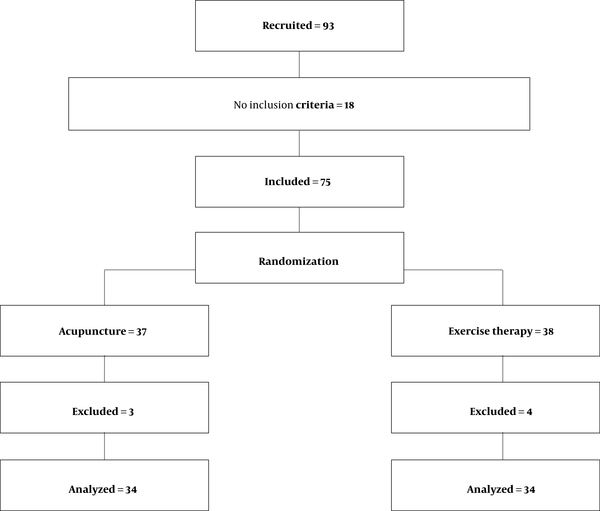 Flow diagram of participants throughout the study

The following inclusion criteria were based on medical history, physical examination, and cervical MRI. Radicular or non-radicular neck pain lasting for at least 3 months; no acute cervical nerve root compression; absence of indications for surgery (red flags); lack of history of myelopathy; not receiving physical therapy, exercise, manipulation or acupuncture during the last 6 weeks; no history of neck surgery within the previous year; no history of cervical fracture or dislocation; no history of systemic inflammatory diseases such as spondyloarthropathy and fibromyalgia; lack of history of coagulopathy or taking anticoagulant medications; no pregnancy; lack of contraindication of MRI. The exclusion criteria consisted of the patient’s unwillingness to continue the study and receiving other therapeutic modalities during the study.

The included patients were randomly allocated to two groups using a simple randomization method. The patients chose a sealed envelope specifying the intervention groups. Group 1 (exercise group) received supervised and home-based neck exercises. Acupuncture was administered for the patients in group 2 (acupuncture group). The statistical analyzer and the outcome assessor were blind to the groups.

The CONSORT (Consolidated Standards of Reporting Trials) flowchart of the study is shown in Figure 1.

All the patients were requested not to receive other forms of intervention except 500 mg of paracetamol if the pain in their neck during rest was more than 5 on 10-point visual analog scale (VAS). Both interventions lasted for 6 weeks.

Patients in group 1 received supervised exercise in the hospital once a week and performed the exercises at home on the other days of the week for 6 weeks. The exercise program consisted of stretching and strengthening exercises. Trapezius, Levator scapula, Scalenes, and Sternocleidomastoid muscles were stretched 2 times a day. Each stretching exercise lasted 30 seconds and was repeated 5 times in each session. Strength training was performed on the cervical extensors, cervical deep flexors, upper and middle Trapezius, and rhomboid muscles. This exercise was in the form of 3 sets per day, each with 10 repetitions, 3 times a week. All the participants were advised to begin each exercise session with warm-up aerobic activities lasting for 10 to 15 minutes. They were also trained to apply ice-pack on the neck and trapezius muscle area for 20 minutes to relieve pain.

The proximal and distal points of cervical acupoints were selected. After disinfecting the skin with alcohol, the energy type K needle (Jiajian, China) with a length of 25 and a diameter of 0.30 mm was inserted in the points of GB20, GB21, BL10, BL11, BL12, DU14, DU16, SI3, SI11, and SI. In addition to the mentioned acupoints, acupuncture was also performed in cervical trigger points in each session. All needles were manipulated in 45 degrees of clockwise and counter clockwise rotation and were maintained for 15 minutes. This procedure was repeated two times a week for 6 weeks. Patients were treated by a sports medicine specialist with 10 years of experience in acupuncture. No side effects were seen in the patients.

Data obtained from the patients were analyzed using SPSS software (version 21, SPSS Inc. Chicago, IL, USA). The normal distribution of the continuous variables was determined using the Kolmogorov-Smirnov test. The data pertinent to these variables are shown as either mean ± SD. For the purpose of comparing the baseline demographics of the two groups, independent sample t-test was used. Moreover, for evaluating the relationship between pain score, age, BMI, and duration of the symptoms, the correlation test of Pearson was applied. ANOVA with repeated measures was used to compare the effect of the intervention in different follow up times in each group. Independent samples t-test also was used for comparing the outcomes between the two groups after intervention. For all tests, statistical significance was set at a level of < 0.05 (2-tailed).

Seventy-five patients with chronic neck pain were evaluated from September 2017 to October 2018. Two patients in the acupuncture group withdrew the treatment due to lack of pain reduction and one patient left the study at the end of the therapeutic sessions. Also 4 patients in the exercise therapy group were excluded from the study due to inconsistent weekly visit by the therapist. The process of enrollment and accomplishment of the study is illustrated in Figure 1.

Overall, 68 Patients including 12 males (17.6%) and 56 females (82.4%) with a mean age of 43.97 years were assessed. 4.4% of the patients had a BMI of less than 18.5, 29.4% had a BMI between 18.5 to 25, 38.2% had a BMI between 25 to 30, and 28% had a BMI more than 30 (Table 1). There was no correlation between age or sex and other outcomes. There was a correlation between BMI and the score of NPDS questionnaire 6 weeks after the treatment (P < 0.05). 45.6% of patients had neck pain for less than one year and 54.4% had neck pain for more than one year. There was a correlation between pain duration and the score of NDI questionnaire 6 weeks after the treatment (P < 0.05). Almost 6% of participants were cigarette smokers. There was no correlation between smoking and the outcomes. Baseline characteristics were not significantly different in both groups, except for the age which was lower in the acupuncture group compared to the exercise therapy group (Table 1).

Table 2. The Difference of the NDI Score Between the Two Groups at Each Time Point (Columns) and Within Groups Compared to Baseline (Rows)

Table 3. The Difference of the NPDS Scores Between the Two Groups at Each Time Point (Columns) and Within Groups Compared to Baseline (Rows) 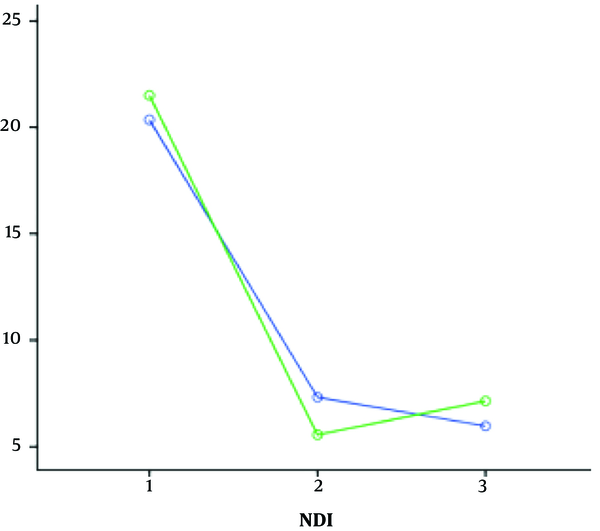 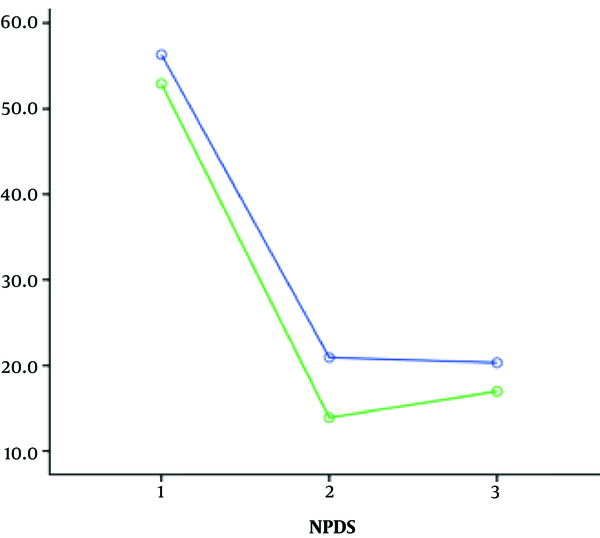 The NDI and NDPS baseline mean scores in the acupuncture group were 20.35 and 56.3, respectively. These values improved significantly to 7.32 and 20.92, respectively after 6 weeks and changed to 5.97 and 20.32, respectively after 12 weeks (P < 0.001). Changes of the NDI and NDPS scores between week 6 and week 12 were not significant (P > 0.05). All of the 10 questions of the NDI questionnaire and 20 questions of the NPDS questionnaire were assessed separately. However, no significant difference was observed between the groups.

Although, there was no statistically significant difference between acupuncture and exercise therapy in improving CNP at weeks 6 and 12 of the intervention, pain and function were slightly better in the exercise therapy group compared with the acupuncture group. Since the mean age of the patients in the acupuncture group was significantly lower than the exercise therapy group, it can be assumed that if the age of the participants was similar in the two groups, different results might have been achieved. In this study, despite discontinuing the intervention after 6 weeks, the effect of treatment persisted until to the end of the study (week 12). Considering the insignificant difference of pain and function in weeks 6 and 12, it can be concluded that the effect of either exercise or acupuncture persisted for 12 weeks. Recently, one meta-analysis (31) reported that the effect of acupuncture on CNP remained for nearly 12 months in 90% of the patients. In another study, the effectiveness of acupuncture lasted for 6 months (32). Several studies demonstrated the short-term beneficial effects of exercise therapy while the long-term effects are still inconclusive (10, 11, 26, 27). In one of the few surveys which evaluated the long-term effect of exercise on neck pain, Chiu et al (11) reported that the effect of strengthening exercises was considerable until 6 weeks. However, this effect disappeared after 6 months. Although the prolonged beneficial effect of acupuncture is proven in some studies; our study could not provide any evidence in this subject due to the limited follow-up period. Wilke et al. claimed that combination therapy of exercise and acupuncture is superior to either of those treatments alone (33). They showed that a combination of acupuncture and stretching is a suitable therapeutic method to improve cervical movement in the short term. Based on the authors’ experience, combination therapy is effective, although further studies are needed in this regard. Most of the earlier studies have focused on strengthening exercises only. However, our exercise protocol included both stretching and strengthening exercises. High prevalence of CNP among Iranians with improper neck posture and muscular tightness (33-35) is the reason for including stretching exercises in the therapeutic protocol.

The main limitations of this study were the absence of a placebo group and also the short-term Follow-up.

Both acupuncture and exercise therapy provided equal pain reduction and functional improvement in CNP patients with or without radicular pain. Further studies are required to evaluate the long-term effects of these therapeutic methods in CNP patients.

This research was funded by Iran University of Medical Sciences. The authors highly appreciate the cooperation of all sports medicine assistants who helped us for this project.