The Wiedemann-Rautenstrauch or Neonatal Progeroid Syndrome: Report of a Patient with Gingival Hyperplasia and Severe Anterior Open Bite

Here is the report of a 6.5-year-old female patient with clinical signs of WRS referred to the Department of Periodontology of Shiraz School of Dentistry with the chief complaint of toothache and gingival hyperplasia. Carious teeth were extracted, and excess gingival tissue was removed through a surgical procedure under general anesthesia. The patient was the first case with a concomitant severe anterior open bite.

Therapies for WRS are symptomatic, requiring the coordinated efforts of a team of specialists. Dentists and oral surgeons can be recruited by pediatricians and family physicians to improve the quality of life of such patients.

The Wiedemann-Rautenstrauch syndrome (WRS) is a rare progeroid syndrome (PS), first coined in 1981 by Devos et al. (1), following the presentation of four patients with similar characteristics by Rautenstrauch and Singula in two sisters and Wiedemann in two unrelated patients in 1979 (2, 3). PSs are rare genetic disorders mimicking the clinical and molecular features of aging. The underlying pathophysiology of such disorders is a mutation in genes encoding either DNA repair proteins or the lamin A/C (LMNA) (4). The etiology of WRS remains unknown (5). The inheritance pattern is supposed to be autosomal recessive (AR), although specific genes are not identified (6). Mutations of the LMNA gene were not found in four clinically well-characterized WRS patients, and recessive mutations of a different gene are speculated on as the cause of this disorder (7). It is not confirmed that the LMNA, ERCC8, or ZMPSTE24 mutations account for WRS either (8). Wambach et al. (9), suggested that bi-allelic, POLR3A variants altering splicing and/or truncate translation underlie the autosomal-recessive subtype of WRS. At present, molecular researches on the determination of particular mutations, involvement of modulator genes, additional mutations, and polymorphisms of POLR3A, which might lead to WRS, are in progress.

WRS has a vast phenotypic variability (10); however, the similarity of the reported cases is high enough to make a proper diagnosis (11).

WRS, also known as the neonatal progeroid syndrome (NPS), differs from other progerias in the complex of signs and symptoms present at birth (12). Core clinical signs include severe intrauterine and postnatal growth failure, hydrocephaly, prominent scalp veins, sparse hair of the scalp, eyebrows, and eyelashes, generalized lipoatrophy, psychomotor delay, and progressive neurological deterioration. Natal teeth and micrognathia are also reported in some cases (13).

A 6.5-year-old female patient, a known case of WRS, was referred to the Department of Periodontology of Shiraz School of Dentistry by the Comprehensive Medical Genetics Center, Shahid Soltani, Shiraz, Iran, with the chief complaint of gingival hyperplasia and abscessed teeth. The patient was born to a Caucasian, consanguineous healthy, 25-year-old mother and 26-year-old father. The family history was unremarkable for any similar conditions. The gestation period was normal, and the pregnancy was uncomplicated. The mother did not take any teratogenic medications during pregnancy. The only remarkable prenatal finding was small cysts in both kidneys.

The infant was delivered by a caesarian section. Birth weight was 2500 g, height 46 cm, and head circumference 31 cm. The patient had a poor weight and height gain during childhood, with all the curves falling below the 5th percentile. The patient birth certificate indicated that she was born with abnormal craniofacial features, such as severe anterior open bite, widened anterior fontanels, low set ears, and aplasia cutis of the scalp; however, she was discharged with good health conditions and fixed nasogastric tube. Cytogenetic report of peripheral blood analysis indicated 46, XX. According to patient history, teething started at the age of two, and as the teeth erupted, they were embedded in the gingival tissue.

On the first day of birth, ultrasonography revealed two cysts occupying a significant volume of the left kidney and multiple cysts in the right kidney.

The patient had a positive history of hospital admission for severe iron-deficiency anemia (serum hemoglobin level of 6.5 mM/L) resolved with oral iron therapy.

At the age of 6.5 years, a systolic murmur sound (grade III/VI) was audible in the cardiac examination.

The oral examination revealed severe anterior open bite, generalized severe gingival hyperplasia, and multiple dental caries. She had the skew deviation of the left eye, depressed nasal bridge, and maxillary dentoalveolar protrusion, prominent forehead and scalp veins, low-set small ears, sparse and thin hair of the scalp, eyebrows, and eyelashes, alopecia, and large crusted ulcers on the scalp, and dystrophic nails (Figure 1A-F). Generalized lipoatrophy could be seen all over the body. She had a history of occasional spontaneous large blisters on different parts of upper and lower extremities, buttocks, and inner thighs. The patient was on a soft diet and unable to chew. Swallowing was normal. The clinical examination and history of the patient were consistent with the main phenotypic features of WRS. 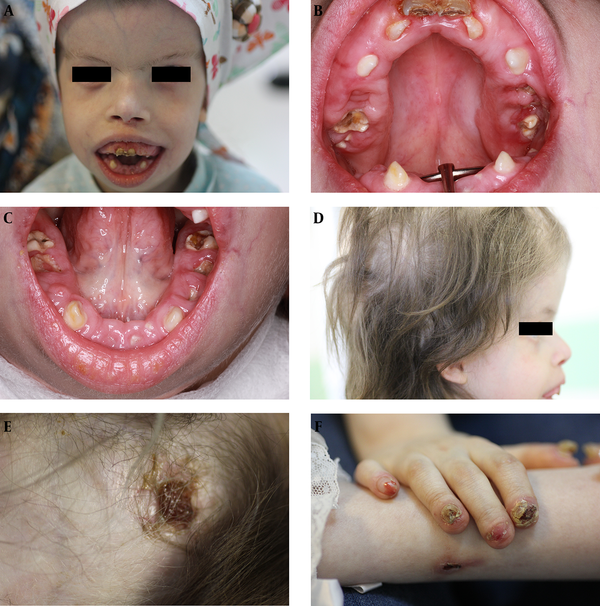 After the clinical examination, periapical and panoramic radiographs were ordered to evaluate the condition of the primary and permanent dentition (Figure 2). The prognosis of the teeth was assigned as hopeless since they were not in function and caused discomfort and pain. The carious teeth were also assumed as the contributing factor to gingival inflammation and hyperplasia. The procedure was carried out under general anesthesia (GA) due to poor patient cooperation.

Figure 2. Panoramic radiograph of the patient

Prior to the surgical procedure, medical consultations were carried out to confirm that the patient could tolerate the procedure safely under GA. Informed consent about the procedure was obtained from the parents.

After induction of GA, the procedure was initiated with an internal bevel incision to remove the excess gingival tissue. Both deciduous and permanent teeth embedded in the gingival overgrowth were exposed in all the quadrants and extracted. The follicles of the permanent teeth deeply embedded in bone remained untouched. The extracted teeth and the excess tissue were discarded. The flaps were then closed with continuous locked sutures (Figure 3). 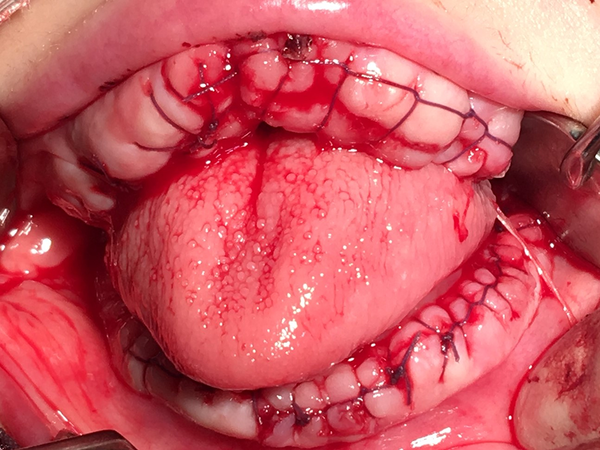 Figure 3. Continuous locked sutures placed to close the flaps after extraction of the teeth and surgical management of gingival overgrowt

The patient was recalled after one month (Figure 4A-C). Nine months after surgery, the patient had no clinical signs of inflammation and ongoing gingival overgrowth. 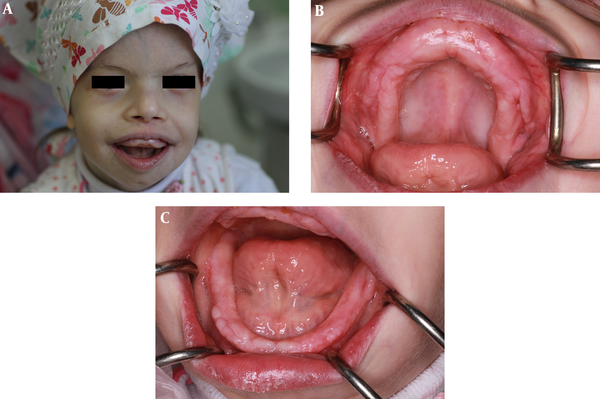 One of the features associated with most cases of WRS is neonatal teeth not observed in the reported patient (1, 8, 9, 11, 12, 14-17). Multiple carious teeth in the patient were caused by poor oral hygiene. Tooth loss due to decay in a patient with WRS and severe gum atrophy was first reported by Shawky et al. (5). To the best of the authors’ knowledge, this is the second report of concomitant WRS and gingival hyperplasia (12) and the first to be expressed as the chief complaint of the patient receiving treatment.

Gingival overgrowth can be caused either by taking specific groups of drugs or as a result of chronic gingivitis associated with the accumulation of dental plaque due to lack of proper oral hygiene and presence of open bite (18). The current case had no history of taking any of the medications inducing gingival overgrowth; therefore, the presence of multiple carious lesions leading to the retention of microbial biofilm plays a prominent role in the occurrence of gingival inflammation followed by overgrowth in a vicious cycle.

Gingiva, in the anterior maxillary region of the patient, was reddish, edematous, and shiny due to severe open bite and dehydration. To the authors’ best knowledge, this patient was the first case of WRS with severe anterior open bite.

According to Paolacci et al. (10), in spite of the very high resemblance, variability exists in phenotypic features and life expectancy of such patients. Malnutrition, which leads to hypolipidemia and hypoalbuminemia in addition to severe infection, is the main cause of the short life expectancy in patients with NPS. Inadequate weight gain occurs in spite of a high-calorie diet. Another prognostic factor to be considered in such patients is the presence and severity of mental and/or neurological dysfunction. Mental status ranges from normal to mild-to-moderate retardation (1, 11, 14, 19, 22-25). A wide range of life expectancy, from seven months to 20 years, is present in the literature (11, 22).

Therapies for WRS are symptomatic, requiring the coordinated efforts of a team of specialists. Pediatricians and family physicians should be familiar with the dental features of patients with this syndrome and recruit the dentists and oral surgeons to improve their quality of life.