Investigating the Characteristics of Intelligence Quotient in Individuals with Intellectual Disability in Rafsanjan, 2019 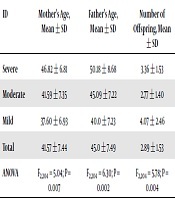 Comprehensive and reliable information about intellectual disability (ID) and its association with environmental and demographic variables is scarce.

This study aimed to investigate the characteristics of intelligence quotient (IQ) in children with ID.

In this descriptive cross-sectional study, all children with ID under the care of the welfare organization and special needs schools of the city of Rafsanjan were included in the study by census sampling (n = 207). After obtaining informed consent, parents completed a checklist including participants’ age, gender, birth month, birth season, and birth order, and also parents’ age and education level. Data were analyzed by one-way ANOVA and chi-square tests.

Individuals with ID have an IQ below 70. ID in children was correlated with the parents’ old age and low education level, but not with their birth season. However, given the higher prevalence of infectious diseases especially viral infections in cold months, it is only sensible to educate couples about how to protect the health of mother and fetus during these periods.

In general, individuals with intellectual disability (ID) have an IQ below 70; however, clinical discretion may be necessary for those who have a somewhat higher IQ but severe impairment in adaptive functioning (1). The American Association on Intellectual and Developmental Disabilities (AAIDD) defines ID as significant limitations in intellectual functioning and adaptive behaviors that begin before the age of 18 and negatively affect social and conceptual skills. In this definition, adaptive behaviors refer to the activities that are typically expected from a person of a particular age (2).

Causes of ID are divided into two categories, genetic and non-genetic, most of which fall into the genetic category. The genetic causes of ID include abnormalities in the number and structure of chromosomes and genomic and single-gene disorders. This is a worldwide issue and has nothing to do with any specific country or particular region (3, 4). Chromosomal abnormalities have been reported to account for about 6.4% of ID cases (5, 6).

Since the prevalence of genetic disorders and autosomal recessive diseases increases with the rate of consanguineous marriages, they are expected to play a critical role in the incidence of ID in countries like Iran, where the rate of consanguineous marriages is reported to be as high as 38% (7). In Iran, a study conducted in Ardabil estimated the prevalence of ID at 3.6%, which is higher than the global average (8).

Many factors can contribute to the incidence of ID. For many years, experts have been intrigued by the potential role of the birth season in the child’s physical and psychological characteristics and their susceptibility to ID. Such a relationship can be related to the role of the season and environmental factors in the early stages of life. For example, it has been suggested that since the first and third trimesters of pregnancy play an important role in the formation and growth of fetal organs, spending these trimesters in the cold season may affect fetal growth, because the mother would be more exposed to communicable and infectious diseases and depression and also less exposed to sunlight. The relation between decreased vitamin D absorption and disorders such as autism is particularly well discussed (9), as vitamin D has been shown to play a key role in fetal brain development through involvement in neuronal differentiation, axon binding, dopamine reception, immune function, and transcriptional control of many genes (10). Some neonatal specialists believe that neonatal jaundice is associated with exposure to sunlight, which is a function of the pregnancy season, although evidence on this association is scarce. In this regard, Sajjadian et al. (11) has reported that the birth season acts as an independent factor in the incidence of neonatal jaundice and that hyperbilirubinemia occurs more frequently in winter than in other seasons. The study by Mohammadi et al. (12) suggested the effects of the season as an environmental factor on diabetes incidence.

Birth order also has a profound association with the incidence of diseases. According to Adler (14), one of the pioneers of research in this area, birth order is significantly associated with children’s development and personality. More recent studies have focused on the relationship of birth order to intelligence, career choices, and success in adulthood (15). Also, it has been reported that first-borns often choose occupations that require high precision, such as academic, medical, law, engineering, computer, or accounting careers (15, 16).

This study aimed to investigate the characteristics of IQ in children with ID in the city of Rafsanjan to provide evidence to confirm or refute the aforementioned hypothesis.

The population of this descriptive cross-sectional study included all children with ID who were studying in the special needs schools of Rafsanjan or were under the care of the governmental and private centers supervised by the welfare organization in Rafsanjan (n = 207).

All subjects were included in the study by census sampling. After gaining permission from the research ethics committee (code: IR.RUMS.REC.1395.155), the purpose of the study was explained to the parents of the children participants and informed consent was obtained. Finally, 207 participants entered the study. A checklist was prepared to collect the desired information including age, gender, birth season, and parents’ education level. The parents completed the checklist regarding the child’s age, gender, birth order, IQ score, and birth month, and regarding parents’ demographic characteristics such as age, education level, and consanguineous marriage. The collected data were analyzed in SPSS 18 using one-way ANOVA and chi-square tests.

A total of 207 participants (mean age = 13.44 ± 4.076 years; age range = 6-25 years) participated in the study. Of these, 107 (51.7%) were male and 100 (48.3%) were female. For the children, the months with the highest and lowest frequencies of birth were May with 30 births (14.5%) and March with 11 births (5.3%), respectively. Of the 207 mothers surveyed, 87 (42%) had an elementary education and 86 (41.5%) had a high school diploma. The frequency of ID among children did not show any significant relationship to birth month, birth order, and mother’s or father’s education level (P > 0.05). The parents of participants with severe ID had a significantly higher mean age than other parents (P = 0.007 and P = 0.002). The families of participants with mild ID had a significantly higher mean number of members than other families (P = 0.004) (Table 1). The girls had a higher rate of mild and severe ID (P = 0.0001) (Table 2). No significant difference was observed between the frequency of consanguineous and non-consanguineous couples with intellectually disabled children (P = 0.229) (Table 2). This test also found no significant relationship between ID and birth season (Table 3).

Table 2. Frequency of Individuals with ID based on Gender and Parents’ Marriage

Table 3. Frequency of Individuals with ID Based on Birth Season

This study examined the demographic characteristics of 207 children with mild to severe ID and their parents. One of the methods to determine the level of learning of individuals, especially children, is intelligence quotient, which is measured by intelligence tests, including the Raven test. According to the American Psychiatric Association (APA), IQs below 70 are considered retarded (1).

Also, note that although the present study observed a slightly higher number of males with ID than their female counterparts, all of the cases with severe ID were female. Similar to the general population, there seem to be gender differences concerning several types of psychiatric diagnoses among older individuals with ID (21). More research is needed to establish if the occurrence of the disease is due to gender differences, inclination to seek care, healthcare utilization patterns, or ability to correctly identify disorders.

In this study, a plurality of individuals with ID (36.2%) was first-born. However, no particular birth order was significantly related to ID. Several studies have also reported an association between birth order and mental disorders (22, 23).

In a study by Turner et al. (24), a V-shaped relationship was observed between birth order and autism (at the levels falling in the domain of ID). In a study by Lord, the nonverbal intelligence score was found to decrease with the increase of birth order (25).

A study by Martin and Horriat (26) on autistic children also found that the IQof these children decreased with the increase of birth order. Scholars, such as Adler, believe that birth order can play an important role in the emergence of diseases. He specifically showed that birth order was significantly associated with child development and personality (14).

The present study found no significant relationship between children’s intelligence and parents’ education level. In this study, 83.6% of the mothers and 79.7% of the fathers had an elementary or high school education, consistent with the findings of Noori et al. (19). On the contrary, He et al.’s study (27) found a significant relationship between children’s low intelligence and parents’ low education. Such a relationship may be related to the poor awareness of low-educated parents regarding how the intelligence of their children can be affected by genetics (28), pregnancy (29), childbirth, and neonatal problems (30).

The results of this study showed a significant inverse relationship between the intelligence of children and the age of their parents. In other words, children with lower intelligence were more likely to have older parents. This is consistent with the finding of many studies (19, 31-36).

Note that in Zhang’s study (34), it was the father’s age that was associated with low intelligence, not the mother’s. The research results suggested that changes in women’s chromosomes after the age of 30 might result in giving birth to children with ID (37).

Sandin et al. (38) believes that the very young or very old age of parents is highly involved in the incidence of ID in children. It is widely accepted that parental age is associated with the birth of infants with various disabilities, including low intelligence. However, this study did not investigate the pregnancy age and cannot support or refute the existence of such an association.

This study also investigated possible associations of ID with birth month and season. Regarding the population of this study, the months with the highest and lowest frequencies of birth were May with 30 births (14.5%) and March with 11 births (5.3%), respectively, and no significant difference was found between different seasons and months in terms of children’s birth rate. Likewise, a study by Kastley (39) found no relationship between birth season or month and intelligence. However, Zerbo et al. (40) reported that children born in the winter were more likely to have autism. Liu et al. (41) reported a significant relationship between the birth month and learning capacity.

Studies conducted in Denmark, Sweden, England, and the northeast US have also reported that autistic children are born more frequently in winter and spring (42), especially in March, which may be due to poor maternal vitamin D absorption during pregnancy (43). A study by Hori et al. (44) reported a relationship between winter and early spring births and schizophrenia and schizotypal personality but found no association between intelligence and the birth season.

The results of this study showed a relationship between children’s ID and their parents’ old age and low education. This indicates that health organizations and institutions should undertake more concerted efforts to raise public awareness of the risk factors that are directly or indirectly associated with ID. This study did not find any relationship between the birth season and ID, but given the higher prevalence of infectious diseases, especially viral infections in cold months, it is only sensible to educate couples about how to protect the health of mother and fetus during these periods. Since this study was conducted without a control group, it was not possible to conclude about the differences between individuals with ID and those with normal intelligence. Therefore, the authors exercise caution in any generalization of the results to normal populations.