Alzheimer’s Disease and its Risk Factors: A Case-control Study 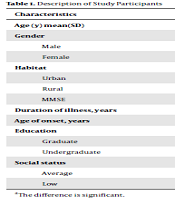 We conducted a case-control study of 95 Alzheimer’s disease patients and 98 matched controls. All participants (case and control groups) were examined by mini-mental state examination. This information was collected by a risk factor questionnaire from January to June 2019. Data were analyzed using logistic regression analysis via SPSS-22 software.

The study highlighted the difficulty of etiology and recommended that the effective interventions for social support of older people, psychological condition, chronic disease, and lifestyle may be promising preventive policies.

Alzheimer's disease (AD) is the most common type of dementia. In 2019, total expenses for providing long-term and hospice care for people aged ≥ 65 years with dementia and AD were estimated to be almost $290 billion worldwide. From 2000 to 2017, total deaths due to CVA, heart disease, and prostate cancer diminished, while reported deaths due to AD significantly increased by 145%. In 2018, almost 16 million family members and other voluntary caregivers provided 18.5 billion hours of care to individuals with AD or dementia (1). The disease not only has a significant impact on the patient and his/her family’s quality of life but also has high social and economic costs (2). The total annual budgets are estimated at $507.49 billion in 2030 and $1.89 trillion in 2050 (3). According to studies, an increase of more than 300% will be seen in India, China, and other South Asian countries, about 70% of which are attributed to AD. In Iran, it is predicted that by the next three decades, 25% of the population will become old, and eight to 10% will suffer from AD (4).

The main features of AD are familial and idiopathic. In the family type, which accounts for approximately 5% of the cases, AD begins before 65, while the idiopathic type accounts for 95% of the cases and is associated with aging and some identified risk factors (4). Cerebrovascular disease, diabetes, hypertension, obesity, and hyperlipidemia are most important among modifiable factors (5). Some comprehensive studies identified other factors, including smoking, depression, mental inactivity, physical inactivity, poor diet, and low education level (6). It is estimated that one-third of AD cases are related to these factors and thus preventable (7).

The eight important modifiable risk factors include low cognitive reserve, tobacco use, sedentary lifestyle, obesity, hypertension in middle age, and diabetes, in sequence, and each factor accounts for between 2% and 20% of AD risk (8). Ennis et al. (2017), in a 10-year longitudinal study, observed the increased cortisol levels in 1,025 participants in 24-h urine samples (9). Also, smoking by stimulating pro-inflammatory action in the immune system is associated with an increased risk of AD (10). Controversially, protective factors like cognitive reserve, physical activity, and estrogen are associated with reduced AD risk (11).

A better understanding of the triggering or protective factors involved in initiating/progressing or delaying/suppressing AD seems essential to promote and develop new interventions and treatments (12). Preventive strategies by delaying the onset of AD can reduce the global economic burden and social impacts of the disease (13). Accurate control of AD risk factors plays a major role in advancing these mitigating and preventive strategies (14).

In Iran, by 2050, it is projected that around 33% of the population is over 60, which leads to an increase in AD cases and high annual costs (about $ 1,500 per person for AD) for the treatment of these patients (16). But so far, scarce research has been conducted on AD among the elderly population of the southwest region of Iran. However, the importance of the present study and the need for a more coherent study of risk factors associated with AD seem to be increasingly essential.

The purpose of this study was to identify the risk factors of AD with emphasis on the role of the individual, environmental, and occupational factors in the elderly population of Dezful city. It is hoped that the results of this study can be effective in preventing this disease and promoting community health, especially for the elderly.

The study was conducted at the Grand Hospital affiliated with the Dezful University of Medical Sciences (DUMS), Iran, from January to June 2019. We enrolled 95 AD patients who were admitted to the Grand Hospital, a major medical center in the north of Khuzestan province, during the study period if they were aged 60 years or older. The AD patients had a certain diagnosis and were followed up by psychiatrists. All 98 control participants were matched for age, with no genetic relatedness to each other or the case participants. These participants had been admitted to the general ward of the hospital for conditions other than neurological problems. Every control subject was given a thorough clinical and neurological examination to rule out any progressive cognitive deficit before entering the study. All participants were examined by the Mini-Mental State examination (MMSE). It is a commonly used set of questions for screening for cognitive function (17). This examination is merely used to indicate the presence of cognitive impairment (18).

The information about risk factors was collected from their caregivers by a structured risk factor questionnaire designed based on a literature review and being assessed for content validity by an expert panel. The charted risk factors included demographic, social, and lifestyle characteristics.

We used SPSS version 22 for data analysis. Cases and controls were matched for age and sex. Categorical risk factors were analyzed by the chi-square test. Logistic regression analysis was used to control the inter-correlation of significant risk factors.

This research and its protocol were supported and approved by the Tehran University of Medical Sciences and Health Services (ethics code: IR.DUMS.REC.1396.1).

A total of 95 AD patients and 98 controls took part in the study. Table 1 shows the comparison of age, sex, education, habitat, duration of illness, age of onset, social status, and MMSE score between AD patients and controls.

Table 2. Frequency Distribution and Comparison of Risk Factors in Case and Control Groups

As shown in Table 2, concerning family and genetic factors, the frequency of positive family history of dementia was significantly different between AD cases and controls. Concerning other risk factors, age, gender, marital status, occupation, social status, chronic disease, religious beliefs, social support, positive family history of AD, physical activity, and smoking showed significant associations with AD development. The odds ratios and adjusted odds ratios of the association of the aforementioned factors with the occurrence AD were calculated by logistic regression analysis. All quantitative and qualitative variables that showed a difference with P < 0.15 in the case and control groups were included in regression analysis, and the following results were obtained.

Table 3. Regression Analysis of Factors Affecting the Incidence of Alzheimer’s Disease in Two Groups of Patients and Controls

Also, regular walking, or in other words, having an active lifestyle, was found as a protective factor against AD so that the chance of getting AD reduced by 0.8 times in people who had active life (P = 0.015, OR = 0.8).

Significant points should be described in our study methodology. First, all participants were examined by a neurologist via standard criteria (diagnostic certainty). Second, all participants (case and control) came from our grand hospital (sampling bias). Third, the patients and their families may have had a greater incentive to remember the risk factors (recall bias).

The study analyzed the correlation between marital status and AD and found that the former could increase the risk of the latter (OR = 0.2). These results are in line with Huang et al.’s research (2014) that showed diabetic patients were 1.76 times more at risk of AD development than non-diabetics (19). The results suggest that those living alone as unmarried may be at risk of early-onset and late-onset dementia (20).

Our findings revealed that chronic diseases, including hypertension, diabetes, and hyperlipidemia are risk factors for AD (OR = 0.2). These results are in line with Huang et al.’s research (2014) that showed diabetic patients were 1.76 times more at risk of AD development than non-diabetics (33-22). Hypertension is a cardiovascular element that increases the risk of AD development. The findings revealed that lipids’ abnormal metabolism may create pathologic processes in AD development (21). Hyperlipidemia can affect important cell functions by less cell membrane flexibility, potential oxidation, diminution, and accumulation (22).

Our findings showed that a familial history of AD is a risk factor. We found that the presence of AD in family members could increase the risk of AD (OR = 1.5). This result is in line with Wolter et al.’s study (2017), showing that a positive parental history of AD increased the incidence risk of AD and dementia (23). First-degree families of patients with AD are at more lifespan risk of developing AD than the rest of the population. To the degree that genetic factors are concerned, this risk may be moderate because of the existence of the apolipoprotein E allele. Almost 15 - 20% of AD cases may be attributed to this risk (24).

The present study results showed that physical exercise had a protective role against AD. Physical activity can decrease the AD risk up to half (OR = 0.4). These findings are in line with others (25). Physical activity plays a protective role against AD by importing brain circulation, facilitation of neurons and synapses production, less diminished neural, preservation of vulnerable brain areas, and improvement of pathologic processes of AD development such as accumulation of Aβ and Tau phosphorylation (26).

According to the present study results, religious beliefs, including doing special behaviors and participation in special ritual events, may reduce AD development by half. Koeing’s study (2012) showed that religion and spiritual activity such as praying, studying Quran, and spiritual communication can preserve synaptic activities and delay cognitive deterioration (27).

A high level of social communication or support is known as a protective factor against AD. Although in the present study, we found no significant evidence, some studies showed that BDNF is an essential molecule for synaptic plasticity and neural repair (28). Thus, by increasing social communication and support levels, BDNF can increase. In contrast, people with a low level of social communication have a low level of BDNF. Thus, by decreasing the BDNF level, the risk of AD may increase. Factors related to the environment may stimulate releasing alpha-secretase in susceptible individuals and result in upsurging dementia risk (29).

We also found that females had a higher risk of AD development (OR = 3). The AD development risk was three times more in females than in males. These findings are in line with other related studies (29). However, several studies have not shown sex differences to be significant. Thus, both sex and gender may affect differences in the development, progression, diagnosis, and clinical AD incidence and prevalence (30).

The main limitation of this study is the essentially modest sample size for this very infrequent disorder. We plan to continue to collect further samples to allow for reproduction in due course.

This is the ﬁrst epidemiologic study in Iran that takes into account almost important risk factors and protective factors for AD suitable to be intervened via personal, clinical, and public strategies. The current study highlighted the difficulty of its etiology and showed that effective interventions for social support of older people, psychological condition, chronic disease, self-care, and lifestyle may be promising preventive policies. More high-quality cohort studies and randomized controlled trials focusing on these elements are essential.

We thank all of the participants. This study was approved by the Dezful University of Medical Sciences and Health Services (grant number: IR.DUMS.REC.1396.1).