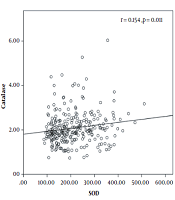 Cardiovascular disease (CVD), particularly coronary artery disease (CAD), constitutes the leading cause of death across the world. They are responsible for the highest mortality rate in Iran. The traditional risk factors for CAD are smoking, obesity, hypertension, family history, diabetes mellitus, and hyperlipidemia. Furthermore, enhanced oxidative stress is known as a novel risk factor for CAD.

The associations of oxidative and antioxidative markers were investigated relative to the occurrence and severity of CAD.

A total of 286 participants, including 141 males and 145 females aged 30 - 70, were classified as CAD case and control groups, based on their coronary angiography results. The CAD severity scoring was done based on the number and extent of lesions in coronary arteries. The activity of superoxide dismutase (SOD), catalase (CAT), glutathione peroxidase (GPx), and Total antioxidant capacity (TAC) was assayed using the ferric reducing ability of plasma (FRAP) method. Meantime, malondialdehyde (MDA) was measured as a lipid peroxidation product.

The results demonstrated a significant increase in SOD activity (P = 0.019) and the uric acid concentration (P = 0.000) of CAD patients compared to the control group. Although no change was seen in GPx and CAT activity, as well as FRAP and MDA, a significant positive correlation was found between CAT and SOD activity (P = 0.011) and between FRAP and uric acid (P = 0.000) levels.

The results suggest that some antioxidants are significantly associated with the severity of CAD, thereby helping predict the risk of cardiovascular events. However, extra studies are needed to endorse the significance of these findings.

Coronary artery disease (CAD) is an important cardiovascular condition (1), causing 7.4 million deaths annually worldwide (2). As a multifactor disease, CAD is associated with upwards of 250 various risk factors (3). Some of these risk factors are hypertension, hyperlipidemia, diabetes, age, sex, obesity, smoking, and positive family history. Besides these traditional risk factors, oxidative stress constitutes an important novel risk factor for CAD (4). Oxidative stress is introduced as a key regulator of CAD pathogenesis and progression (1, 2). It stems from the fact that increased oxidative stress is suggested to be associated with hyperlipidemia and diabetes mellitus (1).

Oxidative stress is a complication occurring where there is an imbalance between reactive oxygen species generation and antioxidant capacity (1). Reactive oxygen species (ROS), which are produced through normal metabolic processes, are likely to cause oxidative damage to DNA, proteins, lipids, and sugars (5). However, ROS shows physiological functions at concentrations ranging from low to moderate (6). Given the difficulty of ROS measurement, it would be appropriate to detect the modified products of these macromolecules as biomarkers of oxidative stress (5). Malondialdehyde (MDA) is an unsaturated aldehyde that is generated as secondary products during lipid peroxidation and a current and importantly accepted marker of oxidative stress (7, 8).

This study was designed to evaluate the antioxidant status by determining SOD, CAT, GPx, uric acid, and FRAP in CAD patients. Also, MDA was measured in investigating lipid peroxidation.

Blood samples were collected from 141 men and 145 women aged 30 - 70 years - all suspected of CAD - following coronary angiography at Zahra Hospital of the University of Mazandaran. Patients with a history of acute myocardial infarction, percutaneous transluminal coronary angioplasty, infectious or inflammatory disease, severe liver or renal disease, neoplasm, and hematologic disorders were excluded from the study. who were classified as CAD cases and controls according to the results of coronary angiography., while subjects with no luminal stenosis or < 10% stenosis were classified in the control group. Furthermore, the severity of CAD was scored on the basis of the number and the extent of lesions at coronary arteries.: 2 (mild), 3 (moderate), and 4 (severe) (14). Written informed consent was taken from all patients.

Biochemical and hematological measurements: Venous blood samples were obtained from patients before angiography following 12-h fasting. After the isolation of serum, whole blood, and washed red cells, all samples were stored at -80°C before analysis for a maximum of three weeks.

Since the expression of antioxidant enzyme mRNA and protein does not necessarily indicate their activity levels, we measured the activity of SOD, catalase, and GPx, which are the most important antioxidant enzymes in biological systems (10). All analyses were done by colorimetric assays.

Erythrocyte SOD measurement was carried out with a commercially available kit (Ransel: Randox laboratories Crumlin, U.K.). First, the xanthine/xanthine oxidase system produces superoxide radicals that will, in turn, generate a red formazan dye via reaction with 2-(4-iodophenyl)-3-(4-nitrophenol)-5-phenyltetrazolium chloride (I.N.T.). Then, the superoxide dismutase activity measurement was performed by the rate of inhibition of such a reaction. The activity of SOD was calculated from an external standard curve and reported as unit per gram of hemoglobin (U/g Hb).

The GPX enzyme activation in blood samples was performed based on the method of Paglia and Valentina using a commercially available kit (Ransel: Randox laboratories Crumlin, U.K.). In this assay, GPX catalyzes glutathione oxidation by cumene hydroperoxide. Then, the oxidized glutathione (GSSG) is immediately converted to the reduced form with concomitant oxidation of NADPH to NADP+ in the presence of glutathione reductase (GR) and Nicotinamide Adenine Dinucleotide Phosphate (NADPH). A decrease in absorbance at 340 nm was assessed. The GPX and SOD results were reported in u/g Hb.

The catalase activity in the erythrocyte lysate was determined according to Aebi (12), by monitoring the decrease in absorbance at the rate of decomposition of H2O2 at 240 nm.

FRAP assays: The ferric tripyridyltriazine (Fe3+ TPTZ) complex is reduced to ferrous (Fe2+) at low pH, which is blue and can be monitored by measuring changes in absorbance at 593 nm. Absorbance changes are directly proportional to the reducing power of electron-donating antioxidants present in the plasma. The change in absorbance is translated into a FRAP value by relating 593 nm absorbance changes in the test sample to that of a standard solution with a known FRAP value.

Statistical analysis was performed using SPSS software (v.21, IBM Corporation). Data are presented as mean ± SEM. To study different parameters with the prevalence of CAD, the results were analyzed using Student’s t-tests between the CAD and control groups. Correlation between the severities of CAD and antioxidative parameters was presented using multiple linear regression.

4.1. Association of Variables with CAD Incidence

Table 1 indicates the general characteristics and oxidative stress status parameters in controls and CAD patients. As expected, the CAD population had a higher percentage of smoking patients. The results showed that the values of antioxidative parameters (SOX and UA) were significantly higher when compared to the control population. There was no statistically significant difference in the activity of CAT and GPx between patients with CAD and the control group.

a Significant P values are shown.

b P-value was estimated from t and χ2 tests.

4.2. Relationship Between Severity of CAD and Antioxidative Parameters

b P ≤ 0.05 indicates significant differences between variables and severity of CAD. 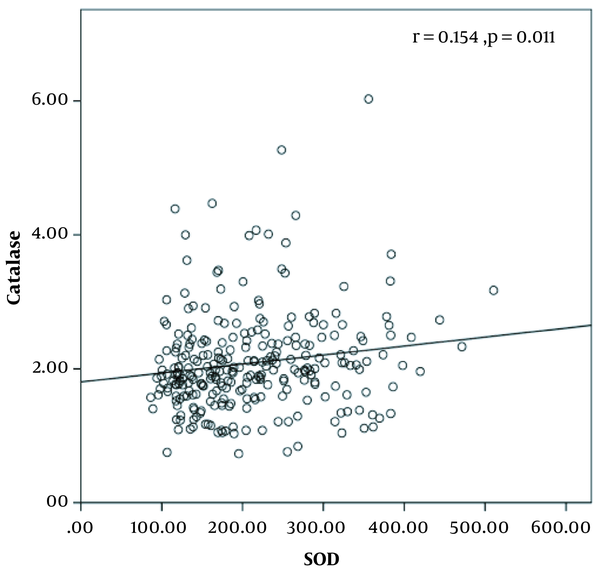 In this work, we investigated differences in the levels of enzymatic antioxidants (SOD, CAT, GPx) and FRAP (as a non-enzymatic antioxidant) between CAD patients and healthy persons. We also determined MDA (as a mediator of inflammation). Although our results revealed no statistically significant differences in CAT and GPx activities, FRAP, and MDA, some studies have already indicated significant differences in these factors in patients with cardiovascular diseases (2, 7, 15, 16).

On the other hand, SOD activity was found to be significantly higher in CAD patients than in controls. In agreement with our result, Weinbrenner et al. and Bagatini et al. observed an increase in SOD in patients with CHD when compared to healthy persons (17, 18). It may be explained by the fact that the rise in SOD activity could be a protective mechanism for preventing tissue damage caused by oxidative stress (17).

However, Senthil et al. (15) and Pandey et al. (19), in disagreement with our results, have shown decreasing SOD activities in erythrocytes and platelets in patients with myocardial infarction. The decrease in SOD activity may be explained by increased oxygen-derived free radicals. Hence, fewer O2- concentrations increase the SOD activity while higher O2- concentrations inhibit it (16). In the present study, it seems that the reason for not observing this relationship was increased uric acid (data not shown), as uric acid is one of the major antioxidants of plasma acting as scavenging oxygen radicals (14). As mentioned previously in our study, increased uric acid was proportionate to changes in the Total antioxidant capacity (TAC) or FRAP test, and a significant correlation was shown between uric acid and FRAP. Uric acid also showed a significant correlation not only with the occurrence but also with the severity of CAD (20).

The results of multiple linear regression analysis also showed that after adjusting for other variables in the model, with an increase in the severity of CAD, the SOD activity increased by 0.151 folds on average. This supports the notion that the rise in SOD activity could be a protective mechanism in CAD patients. Although there are no significant differences in CAT activity between patient and control groups, a direct correlation was observed between SOD and CAT. This correlation was directly proportional to the activity of both enzymes. As known, SOD converts superoxide radical (O2-) into hydrogen peroxide (H2O2), thereby being detoxified by catalase (21).

The results showed higher total antioxidant capacity and SOD activity in CAD patients than in controls. Such enhancement is significantly associated with the severity of CAD and may help predict risks of cardiovascular events. However, further studies are needed to clarify if it would be possible to inhibit the progress of cardiovascular diseases by applying changes.

Copyright © 2021, Trends in Medical Sciences. This is an open-access article distributed under the terms of the Creative Commons Attribution-NonCommercial 4.0 International License (http://creativecommons.org/licenses/by-nc/4.0/) which permits copy and redistribute the material just in noncommercial usages, provided the original work is properly cited.
download pdf 306.79 KB Get Permission (article level) Import into EndNote Import into BibTex
Number of Comments: 0