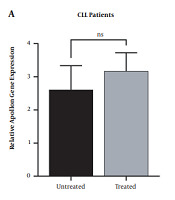 The incidence of B-chronic lymphocytic leukemia (B-CLL) resulting from the clonal accumulation of apoptosis-resistant malignant B lymphocytes is growing in the adult population of Iran. Inhibitors of apoptosis proteins (IAPs) are considered as factors that can delay the onset of CLL cell apoptosis. Berberine is an isoquinoline alkaloid isolated from Cotridis rhizoma that exhibits anti-tumor activities through various mechanisms.

In this study, we investigated the impact of berberine on the level of Apollon expression in peripheral blood mononuclear cells (PBMCs) of 12 cases newly diagnosed with CLL and 6 healthy donors.

At first, the level of Apollon expression was assessed in PBMCs of CLL patients compared to the healthy donors. Peripheral blood mononuclear cells were cultured in RPMI-1640 medium with 5% fetal bovine serum (FBS) and 1% penicillin/streptomycin for 48 hours, and the effect of berberine (25 µM) on the level of Apollon expression in CLL patients was assessed and compared to that of healthy donors.

Overall, our results suggest that berberine has no direct effect on the expression of Apollon gene in CLL patients, and pro-apoptotic impacts of berberine may be exerted through other mechanisms.

B-chronic lymphocytic leukemia (B-CLL) is characterized by the abnormal accumulation of B lymphocytes in the peripheral blood, bone marrow, and lymphoid tissues. Chronic lymphocytic leukemia is the most prevalent adult leukemia in Western countries and accounts for 11 - 15% of total hematopoietic cancers in Iran (1). The incidence rate of this condition increases in adults with median age of 72 years. Moreover, males are more affected than females (1.7: 1) (2). Morphologically, CLL cells are considered as long-lived, small, mature, and resting lymphocytes with the CD5+, CD19+, and CD23+ phenotypes (3).

However, alteration in the capacity of cell apoptosis that leads to resistance to anti-tumor immune response is a principal feature of CLL (4). There is strong consensus that defect in apoptosis regulation leads to the accumulation of malignant B cells. Apoptosis as programmed cell death is executed through the activity of caspase family and controlled by several checkpoints (5). One of the apoptosis regulation checkpoints is the control of caspase activation through the inhibitor of apoptosis protein (IAP) family, including XIAP, cIAP1, cIAP2, ILP-2, NAIP, survivin, and BRUCE/Apollon. The Inhibitors of apoptosis protein consist of at least one baculovirus IAP repeat (BIR) domain, C-terminal RING zinc-finger domain, and caspase recruitment domain (CARD) (6). Moreover, IAPs play a central role in the cell cycle and signal transduction.

It is demonstrated that IAPs are tightly associated with RE1-silencing transcription factor (REST) expression, as a master regulator in tumor development, progression, and metastasis (7). Therefore, it seems that the dysregulation of IAPs may lead to tumorigenesis. In this context, Apollon/BIRC6 (BIR-containing protein 6) has been identified as a 530kDa protein that its encoding gene is located on the chromosome band 2p22. It is demonstrated that Apollon exerts its anti-apoptotic activity through promoting ubiquitination, and subsequently, the degradation of the pro-apoptotic protein Smac/DIABLO. It is also able to bind to pro-caspase-9 and inhibit its activation (8). Accordingly, the overexpression of BIRC6 has been demonstrated in hematological malignancies, including childhood acute myeloid leukemia (AML), acute lymphoblastic leukemia (ALL), and CLL, and it has been associated with poor prognosis and chemoresistance (9, 10).

In addition to the reported beneficial effects in various diseases, herbal medicines have long been accepted as adjunct therapeutics in cancer treatment. The growing body of evidence reveals that berberine-BBR (chemical formula: C20H18NO4, slowly soluble in water), as an isoquinoline alkaloid found in numerous types of medicinal plants such as Coptidis rhizoma, Phellodendron chinense schneid, and Phellodendron amurense, is able to promote apoptosis in several types of tumors through the inhibition of IAPs family and the activation of caspase-9 and mitochondrial-mediated pathways (11, 12). Berberine may downregulate the expression of X-linked inhibitor of apoptotic proteins (XIAP), leading to the induction of apoptosis in leukocyte-depleted p53 genes. Moreover, berberine hydrochloride plays a focal role in reactive oxygen species generation, mitochondrial function, DNA topoisomerase inhibition, DNA or RNA binding, matrix metalloproteinase regulation, p53 activation, and NF-kappa B signal activation. Recently, the anti-metastatic and anti-cancer features of berberine against several cancers, including lung, prostate, breast, and gastric cancer, have been reported. In particular, the anti-proliferative and pro-apoptotic impacts of berberine have been demonstrated on leukemic cells derived from CLL patients (13, 14).

Although studies have focused on the apoptotic role of berberine on CLL cells through mitochondrial pathway and the suppression of anti-apoptotic Bcl-2 gene expression, its impact on Apollon remains largely unknown. This study aimed to investigate the impact of berberine on the levels of Apollon gene expression in CLL patients and healthy donors.

Totally, 12 patients newly-diagnosed with CLL and 6 healthy age-matched subjects who had no leukemia or other hematologic malignancies were enrolled in this study. The inclusion criteria for the diagnosis of CLL were according to the International Workshop on Chronic Lymphocytic Leukemia guidelines (15). The main demographic features of the patients are summarized in Table 1. A total volume of 10 mL peripheral whole blood was obtained from the participants after written informed consent was obtained from them. The study was approved by the Ethics Committee of Semnan University of Medical Sciences (IR.SEMUMS.REC.1394.174).

Peripheral blood mononuclear cells (PBMCs) were isolated from fresh heparinized samples by Ficoll-Hypaque density gradient (Amersham Pharmacia Biotech, Sweden). Briefly, peripheral blood samples were layered over the Ficoll-Hypaque gradient. The tubes were centrifuged for 20 min at 490 × g, and isolated PBMCs were distributed at approximately 2 × 106 cells/well in 6-well plate in RPMI-1640 medium with 5% fetal bovine serum (FBS) and 1% penicillin/streptomycin (Gibco, USA) at 37°C in a humidified incubator with 5% CO2 for 48 h in the two groups of treated with berberine (CAS number: 633-65-8; Sigma-Aldrich, USA) at 25 µM concentration (according to the previous studies) (16, 17) and untreated (as control group).

Table 2. The Primer Sequences of Apollo and GAPDH Genes

All the statistical calculations were conducted with Prism version 7.03 (GraphPad Software). After assessment of normality, un-paired and paired t-test was performed to detect the signiﬁcant differences between CLL patients and healthy donors and between berberine-treated and untreated groups, respectively.

4.1. Classification of the Patients and Their Characteristics

A total of 12 patients and 6 age-matched healthy donors were enrolled in the study. The mean age of the patients was 63.8 years (range: 42 - 74 years). Moreover, all the patients are classified as stage 0 (only lymphocytosis) according to the Rai classification of CLL (18).

4.2. The Expression Levels of Apollon in CLL 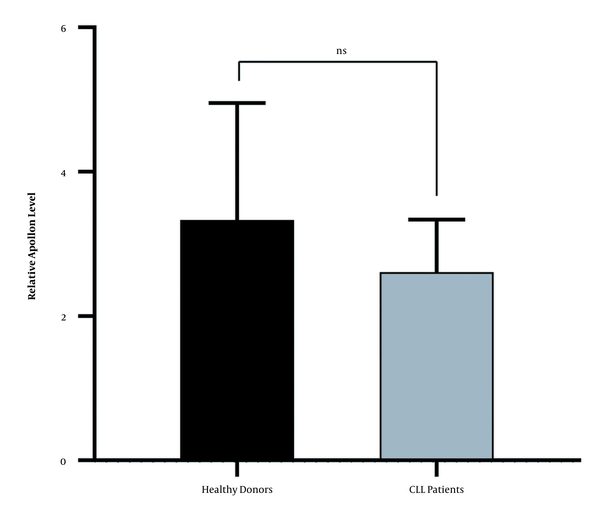 4.3. The Impact of Berberine on the Level of Apollon Expression in CLL

To assess the effects of berberine on the level of Apollon expression in PBMCs of CLL patients, the mean mRNA expression levels of Apollon was compared to that in the control groups by qRT-PCR. Comparative analysis revealed no significant differences between the berberine-treated group compared with the untreated group, both in CLL patients (P = 0.545; Figure 2A) and healthy donors (P = 0.267; Figure 2B), respectively. 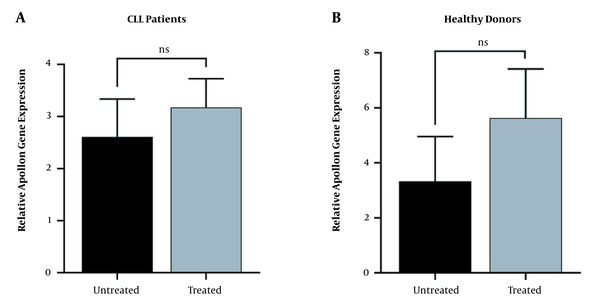 In this study, we addressed the in vitro effects of berberine on the levels of Apollon gene expression in PBMCs of CLL patients. Although our results revealed that the expression level of Apollon was not significantly different in CLL patients as compared to healthy donors, its tendency to decrease was clear in CLL patients. Indeed, Apollon is one of the eight members of IAP family that is heavily involved in the cell cycle regulation and DNA damage repair. The evasion of apoptosis through the dysregulation of IAPs has been reported to contribute to poor progression (10). The overexpression of Apollon has been observed in melanoma, prostate cancer, non-small cell lung cancer, and colorectal cancer (19).

Despite the low expression of Apollon in childhood AML, which was confirmed by Schlafli et al. (21), its upregulation is associated with unfavorable clinical outcomes and the high-proliferative feature of leukemic blasts (9). Breberine, as an isoquinoline quaternary alkaloid, exerts its anti-tumor activity in various human cancers mainly through interference with DNA replication, induction of the G1 phase cell cycle arrest, activation of autophagy, inhibition of tumor metastasis, and angiogenesis (22). This herbal derivative appears to be able to promote apoptosis through the inhibition of IAPs. In this context, Pandey et al. demonstrated that berberine can target survivin and STAT3 in gastric cancer cells (23). In this study, we assessed the effect of berberine on the level of Apollon expression in CLL patients and healthy donors. We found no significant differences between berberine-treated cells and untreated cells, both in CLL patients and healthy donors.

One of the hallmarks of CLL is the overexpression of anti-apoptotic Bcl-2 protein (24). However, berberine may trigger the intrinsic pathway of apoptosis through the downregulation of Bcl-2 by releasing cytochrome c in the mitochondrial membrane, and subsequently, the activation of caspase-9 besides activating caspases-8 and caspase-9 (25, 26). Moreover, based on the previous studies, berberine is able to significantly decrease Bcl-2/Bax ratio and upregulate Fas/Fas ligand and p53 in tumor cells (27). This suggests that the ability of berberine to induce apoptosis in CLL is primarily dependent on the reduction of Bcl-2 expression, not Apollon.

In sum, our findings revealed that berberine has no significant impact on the expression of Apollon gene in CLL patients compared with healthy donors. However, further investigations are warranted to assess the exact effect of berberine on other IAPs.

The authors would like to thank Semnan University of Medical Sciences for financial support (No. 967).

Copyright © 2021, Trends in Medical Sciences. This is an open-access article distributed under the terms of the Creative Commons Attribution-NonCommercial 4.0 International License (http://creativecommons.org/licenses/by-nc/4.0/) which permits copy and redistribute the material just in noncommercial usages, provided the original work is properly cited.
download pdf 535.50 KB Peer Review Comments ( 126.98 KB) Get Permission (article level) Import into EndNote Import into BibTex
Number of Comments: 0