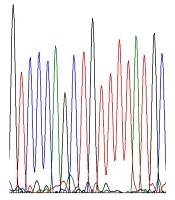 Breast cancer (BC) is the most common malignant tumor in women around the world. Genetic factors do play a vital role in the development and progression of BC. Genetic alterations in the ESR1 (estrogen receptor 1) gene can lead to estrogen dysfunction and increased risk for BC. Nevertheless, due to genetic diversity, the information from different studies is contradictory and controversial.

This study aimed to investigate the potential relationship between the rs1801132 and rs2234693 single nucleotide polymorphism (SNPs) of the ESR1 gene with susceptibility to BC in the Iranian population.

The genotyping of the rs2234693 and rs1801132 SNPs was assessed in 63 BC patients referred to Imam Hasan Mojtaba Center, which is a charity-based foundation for cancer care in Dezful, Iran, from March 2018 to November 2019. Also, 65 healthy women were selected as a control group. The genotyping of the SNPs was performed using the high-resolution melting (HRM) technique and confirmed by DNA sequencing.

Breast cancer (BC) is the most common malignant tumor in women around the world, with 2,088,849 new cases diagnosed and accounting for 25.4% of all cancers, excluding non-melanoma skin cancer in 2018 (1). Similar to other cancers, genetic factors play a significant role in the development and progression of BC (2). Previous studies showed that around 70% of diagnosed BC cases express estrogen receptor alpha (ERα); on the other hand, ER signaling can lead to tumor growth and progression in ER-positive BC (3). The ESR1 (estrogen receptor 1) gene is located at 6q25.1-q25.2 and encodes a transcription factor containing activation function 1 (AF1) domain, DNA-binding domain (DBD), ligand-binding domain (LBD), and ligand-dependent activation function 2 (AF2) domain (3). Khan et al. (4) reported that expression of the ER is associated with a genetic predisposition to BC. Long-term exposure of breast tissue with high levels of estrogen by stimulating the ER leads to a defective estrogen-mediated gene expression and may result in cancer. A study by Khakpour et al. (5) showed the carcinogenesis of the ESR1 in breast tissue by epigenetic mechanisms. Indeed, methylation of the ESR1 may affect the activity of normal tissue in the breast.

Single nucleotide polymorphisms (SNPs) in the ESR1 gene are related to the cancerous tumor, cell proliferation, and metastasis (6). Madeira et al. (7) evaluated the rs2234693 and rs9340799 SNPs in 64 formalin-fixed, paraffin-embedded tissue samples of primary BC compared to 72 blood samples from healthy women as a control group. Genotyping for these SNPs was performed by polymerase chain reaction-restriction fragment length polymorphism (PCR-RFLP) method and confirmed by Sanger sequencing. A significant difference in the rs2234693 allele frequency was observed with 5.14-fold increased BC risk. Previous studies have shown an increased risk of BC in European and African American women related to the rs1801132 (8); however, there is some contradictory evidence in other studies, which may be due to differences in sample size and genetic diversity. The results of a study by Li and Xu (9) showed that the rs2234693 C>T SNP is a risk factor for BC in pre-menopausal women.

Several studies have shown the interdependence between SNPs in the ESR1 gene and genetic predisposition to BC. Nevertheless, due to genetic diversity, the data of different studies in this regard is contradictory and controversial. Therefore, in the current study, we aimed to investigate the potential relationship between the rs1801132 and rs2234693 SNPs of the ESR1 gene with susceptibility to BC in the Iranian population.

This research aimed to examine the relationship between the rs1801132 and rs2234693 SNPs of the ESR1 gene with susceptibility to BC in the Iranian population.

A total of 63 BC patients were recruited from the Imam Hasan Mojtaba Center, which is a charity-based foundation for cancer care in Dezful, Iran, from March 2018 to November 2019. Moreover, 65 age- and sex-matched healthy women were selected as a control group. The control group had no type of cancer and were unrelated to the patients. After completing an informed consent form by patients or their families, the age and stage of cancer were collected. The Review Board of Dezful University of Medical Sciences approved this study (ethical code: IR.DUMS.REC.1397.022).

In the present study, 2 mL of peripheral blood was obtained from both groups, then added to the EDTA tubes and stored at -20°C until DNA extraction. DNA was extracted using Prime Prep Genomic DNA Isolation Kit (GeNet Bio, Korea). The quality and purity of DNA were evaluated by agarose gel electrophoresis and NanoDrop® ND-1000 UV-Vis Spectrophotometer (Thermo Fisher Scientific, Waltham, MA USA), respectively.

The PCR and DNA sequencing were done on 10 samples of each genotype (total of 30 PCR products) to confirm the accuracy of the HRM results. DNA direct sequencing was completed with ABI 3130XL capillary sequencing platform (Applied Biosystems/Life Technologies, Carlsbad, CA, USA). The primer sequences for the rs1801132 and rs2234693 SNPs were designed using the Gene Runner V.4.0 and primer3 V.4.1.0 software (Table 1).

Statistical analysis was performed using the SPSS software (version 22.0, SPSS Inc., Chicago, IL, USA). The Hardy-Weinberg equilibrium (HWE) was assessed in the patient and control groups using the χ2 test (P < 0.05). The odds ratios (OR) and 95% confidence intervals (CI) were considered to assess the relationships between ESR1 polymorphisms and BC risk using χ2 test. The multiple inheritance models (dominant, recessive, and codominant) were done using χ2 test. The two-sided P-value of less than 0.05 was considered as statistically significant. The genotyping was performed by LightCycler® 96 Software v.1.1.0.1320 and the difference plot method. This graph is obtained by subtracting the normalized fluorescence data from the temperature of each sample relative to the baseline sample (a predefined genotype). This graph actually highlights the differences between similar melt curves. The DNA sequencing results were obtained as the electropherograms and evaluated using the chromas V. 2.6.6.

A total of 63 BC patients and 65 healthy individuals participated in this study. The mean age was 46.3 ± 4.8 years in patients and 47.1 ± 3.6 years in controls. There was no significant difference in age distribution between case and control groups (P = 0.407). All patients were female with at least one pregnancy; thus, there was no gender difference between the groups. Out of 63 BC patients, 21 (33.3%) patients were in the early TNM (Tumor, Node, Metastasis) stage (I, II), and 42 (66.6%) patients were in the late stages (III, IV).

Table 2. Genotype Frequency and Allele Frequency of the rs1801132 and rs2234693 Polymorphisms in the Breast Cancer Patients and Control Groups
Table 3. The Survey of Association Between rs2234693 and Breast Cancer by Genetic Modelsa

Figure 1. Difference Plot of the rs1801132. In this graph, homozygote and heterozygote status in the samples were shown to be separated (homozygote CC as baseline sample).

Figure 2. Difference Plot of the rs2234693. In this graph, homozygote and heterozygote status in samples were shown to be separated (homozygote TT as baseline sample). 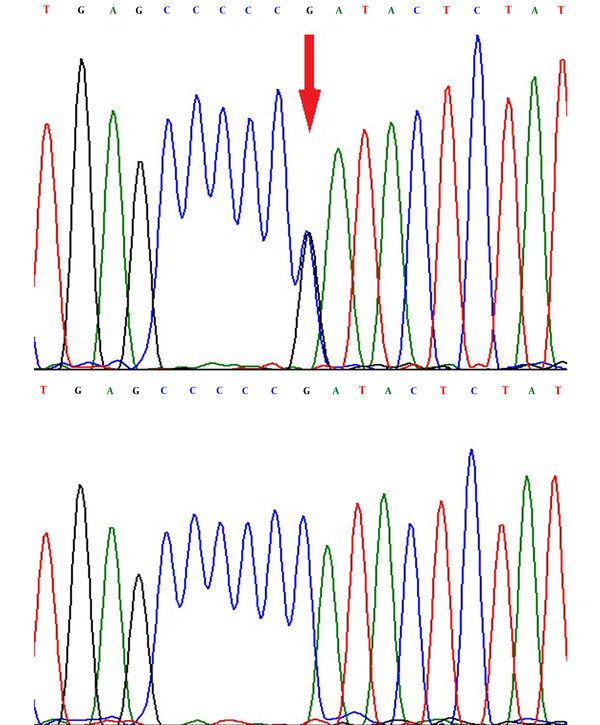 Figure 3. Sequence Electropherogram of the rs1801132 in the ESR1 Gene. The arrow in the above electrophoretogram revealed base substitution C>G heterozygote in a sample, and homozygote CC is shown below. 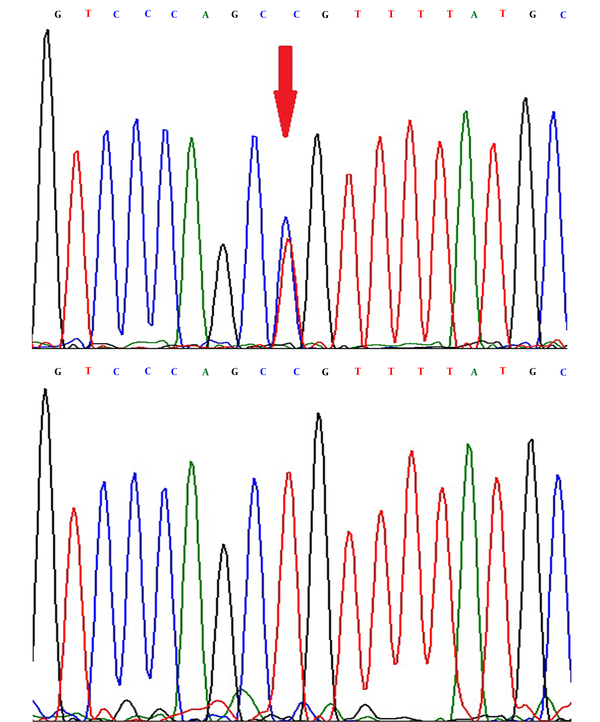 Figure 4. Sequence Electropherogram of the rs2234693 in the ESR1 Gene. The arrow in the above electrophoretogram revealed base substitution T>C heterozygote in a sample, and homozygote TT is shown below.

The influence of the ESR1 gene disturbance in various cancers such as breast, liver, and prostate has been demonstrated in some studies. The ESR1 protein acts as a transcription factor and is responsible for transcribing important genes, such as regulating proliferation genes. Considerable to the significant role of genetic susceptibility in cancer, scientists have focused on assessing the association of the polymorphisms in hormone receptors, especially estrogen, with BC risk (10). As part of precision medicine, some SNPs can be used for a variety of clinical applications, such as susceptibility to various diseases. Genetic predisposition factors play an important role in BC (11). A study by Zhang et al. (12) reported that genetic variations in the rs2234693 and rs1801132 can lead to estrogen dysfunction and increased risk for BC.

The rs2234693 SNP is an intronic variant, and its effect on the receptor’s function is probably due to incorrect splicing and abnormal expression. Herrington et al. (14) reported that the allele C of the rs2234693 SNP produces a functional binding site for the B-Myb transcription factor and significantly increases the transcription of the downstream constituent compared to the T allele, which may explain its high association with the risk of BC. Cai et al. (15) investigated the genetic SNPs in the ERα gene and BC risk in 1,069 BC patients and 1,166 healthy controls and reported that the rs2234693 SNP increased BC risk among individuals carrying CT and TT genotypes (15). Moreover, Li et al. (16) examined the rs2234693 SNP in 10,300 BC patients and 16,620 healthy controls and showed a borderline significant reduced risk for BC in the CC and CC/CT carriers. Genotyping of the rs1801132 SNP was also related to a decreased risk for BC in 5,649 cancer patients and 6,856 healthy controls. These results are inconsistent with our findings; this may be due to the limited sampling or low penetrance role in susceptibility to BC. The results of studies by Carrillo-Moreno on the ESR1 SNPs and BC in the Mexican population (17) and Sakoda LC on the ESR1 and androgen receptor SNPs in relation to BC risk and fibrocystic breast conditions among Chinese women (18) showed that the rs2234693 SNP is not a risk factor for BC.