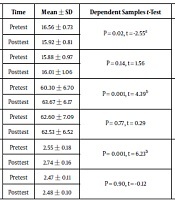 FIFA 11+ training is a warm-up program for the prevention of athletic injuries, including slow running, active stretching, and player-controlled collisions designed to focus on central muscle stability, neuromuscular control, eccentric hamstring strength, and agility, and can improve sports performance.

This study aimed to investigate the effect of eight weeks of FIFA 11+ training on the agility and explosive power of male volleyball players.

In this quasi-experimental study, 24 male volleyball players from the Islamic Azad University of Marvdasht were selected as the statistical sample and divided into two groups of 11+ training and control. The 11+ training group performed FIFA 11+ training for eight weeks, three sessions per week and 20 minutes each session. The control group only had their usual activities in this period. Agility and explosive power were measured before the start of training and 24 hours after the last session of training through Illinois test, horizontal jump test, and vertical Sargent test. The Shapiro-Wilk test and independent/dependent samples t-tests were used to analyze the data (P ≤ 0.05).

It seems that 11+ training can be used to improve the agility and explosive power of male college volleyball players.

Volleyball is one of the most popular sports in the world and because of its popularity, many studies have attempted to find the most comprehensive training program to improve the physical performance of volleyball players (1). In addition to tactical and technical skills, muscular strength and power have proven to be crucial to success in high-level volleyball competitions (2). On the other hand, this sport is considered a serious competitive sport with a high level of skeletal muscle injury. About 63% of musculoskeletal injuries are seen in jump and landing movements, which form an essential part of volleyball defense and attack (3). Deciding on having a training program is an important task for coaches. Among other things, coaches need to decide which type of physical activity is most effective for the athlete to perform and to prevent possible injuries. From this point of view, choosing the training that has a positive effect on more than one factor at a time seems interesting (4).

The FIFA Medical Research and Evaluation Center, in collaboration with the Oslo Sports Injury and Research Center and the Santa Monica Sports Medicine and Orthopedic Center, has expanded a comprehensive 11+ warm-up program aiming at preventing injuries in football. The program consists of three parts: slow running training, strength training, plyometric, balance training and quick running training (5). Despite the success of the FIFA 11+ program in preventing sports injuries (6-8), it seems difficult to persuade athletes and coaches to perform this training solely to prevent injury, unless the training has a positive significant effect on their performance. There is evidence that training programs, including plyometric, balance training and lumbar pelvic stabilization training, can directly improve athlete performance variables, especially those associated with vertical jump height, strength, and agility (9, 10). In this regard, it was reported that although both plyometric and skill training programs made positive changes in athlete jumping and throwing capacity, plyometric training was more effective than skill training in improving these capacities in elite female volleyball players (11). Fazl Ersi et al. (12) stated that central stability is effective in power transfer during exercises; therefore, a greater emphasis on strengthening these muscles may be effective in improving athletic performance. Eight weeks of strength and plyometric training led to improved height jump in young female volleyball players (13). FIFA 11+ training improved the speed, jump, and stability of young amateur soccer players (14). Also, eight weeks (15), four weeks (16), and nine weeks (17) of the FIFA 11+ training resulted in improved jump height in young soccer players (15). However, contrary to the above results, some studies indicated the ineffectiveness of FIFA 11+ injury prevention program in promoting athletes' performance. For example, in Zarei et al. study (18), a 10-week FIFA 11+ injury prevention program had no significant effect on the improvement of zigzag dribbling, Illinois, sitting and reaching, vertical jump, 20 m sprint, and Planck sideways. Also, nine weeks of FIFA 11+ training had no significant effect on improving balance, speed, agility, and vertical jump (19).

In this quasi-experimental applied study, 24 male volleyball players from the Islamic Azad University of Marvdasht were selected as the sample. The inclusion criteria comprised having at least three years of teamwork in volleyball and being at a level of ability to play in the college team. The exclusion criteria included the subjects’ lack of consent and willingness to continue the research process, lack of participation in two consecutive training sessions, inappropriate cooperation during the study, and having injury and pain during the study and at the posttest.

First, the agility (by Illinois test) and explosive power (by horizontal jump and vertical jump test) were measured (23, 24). The Illinois test was used to measure agility. The length of the Illinois test is 10 meters by 10 meters, which is determined by the cones of the track. Four cones were centered at a distance of 3.3 m from each other and the other four cones were 2.5 m away from the central cones. Participants lay behind the starter line on the abdomen as the hands were held next to the body and the head either turned sideways or looked forward. With the “move” command, participants stood on their feet and moved rapidly to the first marker cone, turned it around, and moved to the first central cone, and then they ran up and down the cones. The participants, then, rotated around the second marker on the endpoint at their maximum speed, and moved to the finish line and passed it. The duration of tests being performed correctly was recorded in seconds (25). To evaluate the Sargent jump, participants inked their right fingers, stood on the right side of a wall, and lifted their right hand as high as possible, marking the highest point they could touch. At the moment of jumping, participants could freely bend their lower limbs and use their upper limb movement to reach the peak of the jump. At the highest jump point, participants had to touch the highest possible point with their right hand against the wall. The height of the jump was the difference between the points marked on the wall.

All subjects completed three attempts with a minimum of 45-second intervals between each attempt and only the best jump was considered as their jump height (26). To measure the jump length, participants stood behind a line. They made the long jump by using their hands’ movement. The distance between the heel to the starting line was calculated as the length of the jump. Each subject made the jump twice and the maximum jump length was recorded (27). Subjects were then divided into two groups of 12, including 11+ training (Table 1) and control. The 11+ training group performed FIFA 11+ training for eight weeks, three sessions per week and 20 minutes each session (28). It is worth noting that this training was designed with a focus on central muscle stability, neuromuscular control, eccentric hamstring strength, and agility. During this period, the control group performed only their usual activities. Twenty-four hours after the last training session, similar to the pretest, the agility and explosive power of the subjects in the 11+ training and control groups were measured. The Shapiro-Wilk and independent/dependent sample t-tests were used to analyze the data (P ≤ 0.05).

aSignificant decrease in the posttest compared to the pretest

bSignificant increase in the posttest compared to the pretest

The results showed that eight weeks of FIFA 11+ training had a significant effect on improving vertical jump and long jump in young volleyball players. Consistent with the findings of the present study, Ayala et al. (14), Akbari et al. (15), and Costa Silva et al. (17) reported that FIFA 11+ training improved vertical jump in young male soccer players. Fazl Ersi et al. (12) showed that strengthening the central stability of the body was effective in transmitting power in high jump motion. Also, Gjinovci et al. (11) reported that plyometric training improved the jumping capacity of female volleyball players. Similarly, Hale et al. (13), Marques et al. (2), and Pereira et al. (1) stated that strength training and plyometric training were effective on vertical jump in young female volleyball players. Nevertheless, inconsistence with the results of the present study, Gomes Neto et al. (20) in a systematic review and meta-analysis showed that FIFA 11+ training did not improve jump height among football players. Gatterer et al. (29) reported that five weeks of FIFA 11+ training did not affect standing long jump performance in children aged < 14 years. Inconsistency between the results of the present study and Gatterer et al. (29) study can be due to different samples. Since the second part of FIFA 11+ focuses on lower extremity strength, central stability, plyometric/agility, and balance training (19), it seems that one of the important reasons for the positive impact of FIFA 11+ on the explosive power of volleyball players could be the existence of a second part training.

Given that this article is part of a Ph.D. dissertation approved by the Kish International Branch of Tehran University, the researcher would like to thank and appreciate the spiritual support of the Vice Chancellor for Research Department of this academic branch.

Copyright © 2019, Annals of Military and Health Sciences Research. This is an open-access article distributed under the terms of the Creative Commons Attribution-NonCommercial 4.0 International License (http://creativecommons.org/licenses/by-nc/4.0/) which permits copy and redistribute the material just in noncommercial usages, provided the original work is properly cited.
download pdf 129.20 KB Peer Review Comments ( 104.02 KB) Get Permission (article level) Import into EndNote Import into BibTex
Number of Comments: 0