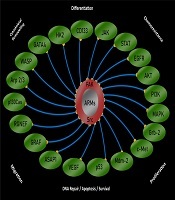 Ovarian cancers, often diagnosed with stage III/IV disease, recur frequently and eventually become resistant to standard chemotherapy. Despite an improvement in our understanding of ovarian cancer causes, survival rates have remained consistently low due to the lack of early symptoms. The 5-year survival rate in patients with an advanced stage (FIGO stage III and IV) is less than 30% as therapies become ineffective in treating metastatic ovarian cancer (1). Most epithelial ovarian cancers are of high-grade serous (HGS-OV) histology. Little is known about the pathogenesis of HGS-OV cancer because of the late-stage presentation in most cases, due to its rapid dissemination. However, there is now extensive evidence that most HGS-OV cancers arise from serous tubal intraepithelial carcinoma (STIC) in the distal region (fimbriae) of fallopian tube epithelium (2, 3).

Other ovarian cancer subtypes are also thought to arise from non-ovarian tissue sources such as endometrioid and clear cell derived from endometriosis, whereas mucinous is often a metastasis from a gastrointestinal source (4, 5). This preliminary travel may imply that migration is a very early process in the tumorigenesis even before the onset of the primary tumor and thus indicative of adhesion mechanisms being involved in the disease in a very early stage. It is intriguing to wonder how much oncogenic potential tumor initiating cells (TICs) carry before adhering and colonizing in the ovarian tissue. Thus, ovarian tissue provides a breeding ground for these incoming highly invasive tumor cells, which is indicative of ovarian tissue being rich in resources required to hold and nurture the tumorigenic process.

Disease progression is followed by another invasion event but this time in the opposite direction, from the ovary to distant organs. Ovarian cancer typically metastasizes either directly to the adjacent organs or through the dissemination of exfoliated tumor cells into the peritoneum, in contrast to most of the other cancer types where lymph nodes are usually involved. Additionally, recurrent or late disease tumor cell clusters floating in the ascitic fluid show distinct expression of adhesion complex-related proteins and are often chemoresistant (6). All these observations suggest that adhesion-related molecules (ARMs) may be assigned far more therapeutic importance than they currently enjoy.

Non-receptor tyrosine kinases, such as focal adhesion kinase (FAK) and proto-oncogene tyrosine-protein kinase Src (Src) are the key molecules of the focal adhesion system, which is a conduit of outside-to-inside signaling. The upregulation of FAK and Src have been reported in ovarian cancer. In particular, FAK (7) and Src (8) activity are much higher in advanced disease and are associated with poor survival rates. Notably, FAK and Src mutually activate each other. This pair of tyrosine kinases regulate intracellular signaling mechanisms associated with chemoresistance in ovarian cancer such as mitogen-activated protein kinase (MAPK) and PI3K/AKT (9).

Ovarian cancer is a heterogeneous disease with several distinct malignant populations and often have stem cell-like cells within the tumor core or distant. A huge array of reports indicated that these immortal cancer stem cells (CSCs) are capable of self-renewal, pluripotency, and responsible for the recurrence and the resistance to clinical interventions. Accumulating evidence suggests that FAK/Src signaling also regulates stemness via several mechanisms and the inhibition of which reduce stemness in cancer cells via interacting stem cell markers such as CD133 (10).

A phase II trial of dasatinib (Src inhibitor) as a monotherapy showed minimal therapeutic value (11). However, Src inhibitors in combination with microtubule stabilizers or platinum-based drugs block angiogenesis, invoke caspase-9 dependent activation of the intrinsic pathway, and downregulate cell proliferation markers and therefore are likely to induce a significant increase in drug sensitivity in ovarian cancers (12). As a single agent treatment, FAK inhibition also demonstrated a reduction in angiogenesis and an increase in paclitaxel sensitivity (7). Even though these and several other studies indicated that regulating adhesion-associated tyrosine kinases (AATKs) improve drug sensitivity in ovarian cancer, these are not yet adequately included in larger clinical trials. Bevacizumab, a non-receptor tyrosine kinase inhibitor, is approved for the treatment of epithelial ovarian cancers and may reduce angiogenesis and tumor burden. However, it is unclear whether anti-angiogenic therapy reduces the distant metastasis due to the unorthodox dissemination of ovarian cancer. In 2019, out of $168 million of NIH funding for ovarian cancer, very little was funded towards the multi-targeting approach-based projects, and AATKs were barely seen. Worldwide, a significant number of multi-targeted studies continually explored MEK (Mitogen-activated protein kinase kinase), PI3K, mTOR HER2, and poly ADP ribose polymerase (PARP) inhibitors and some cell cycle and immune checkpoint inhibitors in various combinations (13). However, none of the multi-targeted approaches yielded significantly durable progression free outcomes to date.

It is beginning to appear that the onset of cancer is a communal effort of assorted components, hence, treatment approach that can target the systemic corruption of including intra- and extra-cellular factors may require to end the oncogenic disarray in the systemic homeostasis, especially in the case of ovarian cancer. The FAK/Src pair not only relays extracellular cues but also interacts with a number of pathways associated with the chemo-resistant disease, including PI3K/AKT, MAPK, and JAK/STAT signaling (Figure 1). 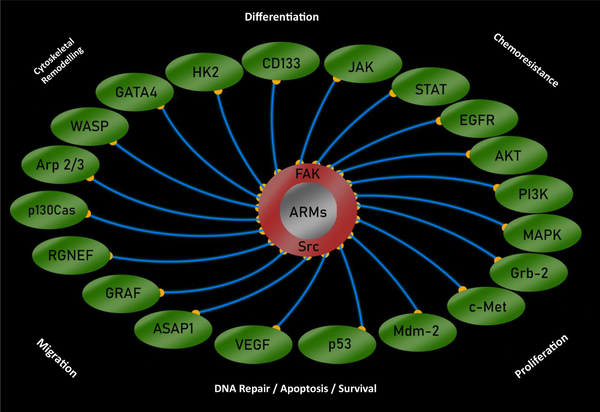 Targeting ARMs will potentially broaden the horizon of combined treatment as it may not only override the environmental oncogenicity but may also normalize the aberrant intracellular signaling. It has been shown that interrupting aberrant ECM-to-cell signals mediated by integrins may normalize cell behavior and reverse tumor development (14). In addition, it was also suggested that the early development of ovarian cancer is dependent on potential tumor forming cells being bound to the sites in ovarian tissue with permissive, as distinct from tumor-inhibiting, characteristics (15). The commensurate inclusion of ARMs as a strategic component of a multi-targeted approach in larger clinical trials may therefore be warranted in ovarian cancer translation research. Such an approach will aim to develop clinical drugs of improved efficacy with the durable outcome by overcoming ovarian cancer cells’ resistance, a major challenge in the clinical management of ovarian cancer.