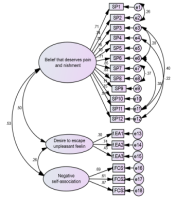 Nonsuicidal self-injury (NSSI) is the direct and deliberate destruction of one’s own body tissue without suicidal intent. This prevalent behavior can have physical, psychological, and social consequences.

This study aimed to explain NSSI in adolescents based on Hooley’s negative self-association model.

The SEM indicated that among the goodness of fit indices, CFI, TLI, and RMSEA were in the desired range. Negative self-association played a central role in NSSI attempts. There was a significant relationship (P < 0.05) between self-punishment and self-injury. Negative associations made people more inclined to avoid negative emotions, but no significant relationship was found with NSSI. However, the path of negative self-association and its relationship with accessibility to and identification with self-injury and attempt to NSSI did not have enough significance and led to a decrease in the model’s fit.

Consistent with the findings of research conducted in the field of self-injury, this study showed that negative self-associations play a central role in attempting NSSI. The results of this study provide a new guideline for designing prevention and treatment programs for self-injuring behavior.

Nonsuicidal self-injury (NSSI) is often seen as superficial and frequent incisions on body tissue with a sharp object (razor, scissors, needle, knife, nail clipper, etc.). Among people who engaged in NSSI, 70% reported skin-cutting (1), around 21% to 44% hitting oneself, and 15% to 35% skin burns (2). Nonsuicidal self-injury has been defined as the intentional destruction of body tissue without suicidal intent (3). Self-harm usually manifests itself in adolescence, and there is no difference in prevalence between genders, races, and economic situations (4, 5). A comprehensive study identified self-harm as a major problem among adolescents worldwide (6, 7).

Numerous models have been proposed to explain the onset and persistence of self-injury. Therapies based on these models have failed to provide empirical support for self-injury therapy (8, 9). Other evidence suggests that some mechanisms are not included in these models while they may play an important role in self-injury (10). One of the new models in explaining the causes of self-injury is the negative self-association model proposed by Hooley and St. Germain (11). In this model (Figure 1), to create a new conceptual approach, empirically supported mechanisms have been combined with new mechanisms in previous models (10). 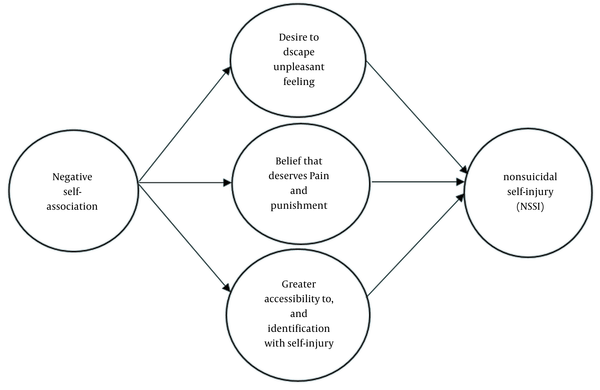 To better understand NSSI, it is essential to examine it in a cultural context. A study of NSSI in Iran may reveal its different patterns. Therefore, in the present study, a model examined the role of negative self-association, avoidance of negative feelings, self-punishment beliefs, implicit association, and identification in the formation of NSSI in adolescents (Figure 1). This study was conducted to investigate the structural validity of the negative self-association model. The current study hypothesized that negative self-association is correlated with NSSI, the desire to escape unpleasant feelings, the belief that one deserves pain and punishment, and greater accessibility to thoughts and identification with self-injury.

Initially, the State Punishment Scale (SPS) and the Emotional Avoidance Strategy Inventory for Adolescents (EASI-A), which were not translated in Iran, were translated by the researcher under the supervision of the supervisor and twice edited by the supervisor and counselors. Then, these questionnaires were presented to several professors of the University of Social Welfare and Rehabilitation Sciences in Tehran and first-semester students to examine the questions psychologically and resolve possible ambiguities. In the next step, in order to assess internal consistency, questionnaires were administered to 50 adolescents. In the present study, the internal consistency coefficients were 0.88 for SPS and 0.72 for EASI-A. Next, the original version of the Implicit Association Test (IAT) computer test in English was downloaded from Dr. Nock’s site (link: nocklab.fas.harvard.edu), and after installation on the laptop, it was reviewed and analyzed by the tutor. After a detailed understanding of how to evaluate and the number of test steps, coordination was done with one of the programmers to make a Persian version of the test. After six edits, the Persian IAT test was finally made according to the original version of the test.

In order to select the boys’ sample, the necessary coordination was made with the principals of three boys’ schools in the 17th district of Tehran and one boys’ school in the city of Rey. After receiving the code of ethics, a letter was issued from the University of Social Welfare and Rehabilitation Sciences to the security of education in District 2 of Rey city to select the sample of girls. Then, the data collection continued in schools with higher rates of reported NSSI. These schools included five girls’ schools and the Ray City Counseling Center affiliated with District 2 Education.

The study measures included (1) The Deliberate Self-Harm Inventory (DSHI) (12); (2) The Forms of Self-criticism/Attacking and Self-reassuring Scale (FSCRS) (13); (3) the Emotional Avoidance Strategy Inventory for Adolescents (EASI-A) (14); (4) State Punishment Scale (SPS); (5) Self-injury Implicit Association Test (SI-IAT) (15) (as shown in Figure 2, at each stage of the test, the categories are displayed on both sides of the screen and the subject’s reaction time in the combined steps is the basis for judging the test result); and (6) General health Questionnaire (GHQ) (16). 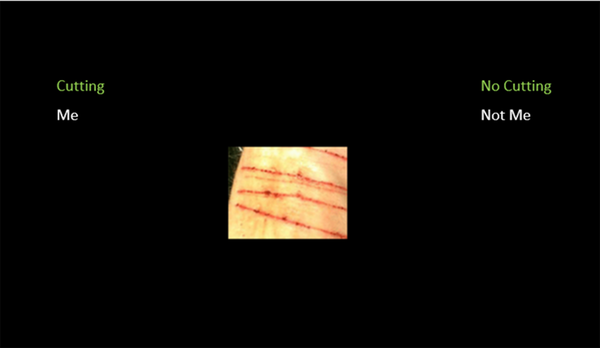 In the current study, data analysis and modeling were performed based on structural equation modeling (SEM) using the statistical software IBM SPSS AMOS v24.0. This study performed a Confirmatory Factor Analysis (CFA) to test the measurement model and the constructs of the SPS and EASI-A. A P-value less than 0.05 was considered statistically significant. 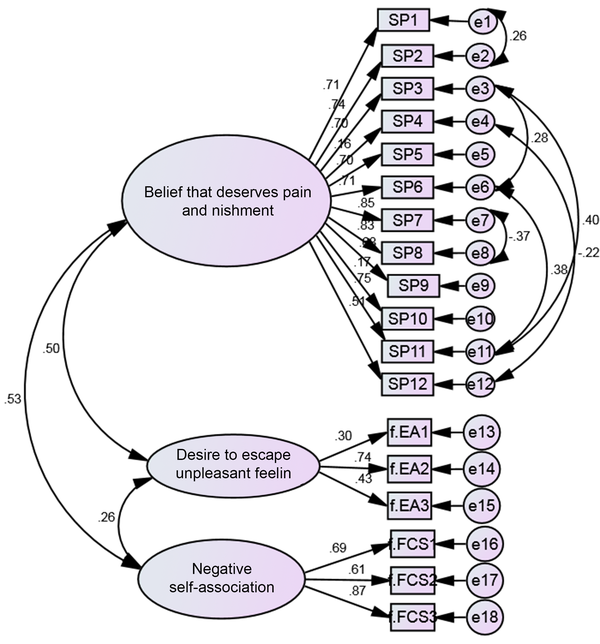 As can be seen from Table 3, all indices are in the good range. Therefore, the goodness of the measurement model is confirmed. 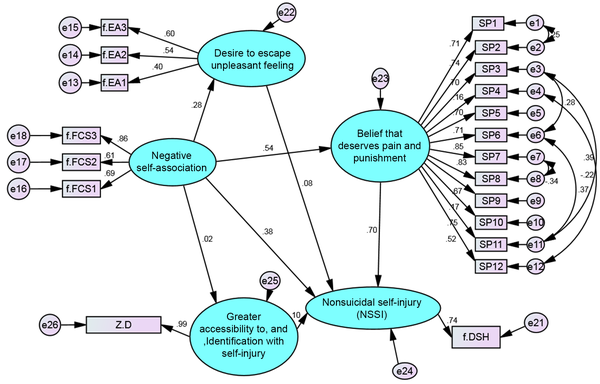 Structural model of the research

In Table 4, the path between the hidden variables in the structural model is presented.

This study aimed to explain NSSI in adolescents based on Hooley’s negative self-association model. This study showed a positive relationship between negative self-association and attempting NSSI. This finding agrees with the findings of Suneja (17), Glassman, et al. (18), and Gilbert et al. (19). According to the proposed model by Hooley and Franklin (10), people who have a negative relationship with themselves and engage in extreme self-criticism are more likely to be exposed to self-injurious behaviors (10).

The present study revealed a positive relationship between the negative self-association model and the tendency to avoid unpleasant emotions. This finding is compatible with the findings of Rosenthal et al. (20). Negative relationship with oneself creates a state in a person who wants to escape from unpleasant feelings. Avoiding unpleasant emotions reduces pain, fear, tension, and anxiety and ultimately reinforces escape and avoidance behaviors (21).

This study showed a positive relationship between the negative self-association model and creating the belief that a person deserves pain and punishment. This finding is consistent with the findings of Gratz (12) and Gratz and Roemer (22). When something unpleasant happens, the person feels he is personally responsible for it and ignores all the external factors that cause it. In these cases, instead of saying, “This is the wrong way to do it”, and “Next time I will try another method”, he says, “I am weak, helpless, and incompetent”. In this way, the person does not focus on the behavior that has been problematic and what he or she can do to correct it (23).

The current study showed no significant relationship between the negative self-association model and greater access to NSSI thoughts. This finding is inconsistent with Smith et al. (24). People with negative self-association set high standards for themselves that if they are not met, they blame themselves. Self-blame individuals also appear skeptical of their actions, react negatively to perceived failures, and strongly blame themselves (24).

The present study demonstrated no significant relationship between the tendency to avoid negative emotions and attempting NSSI. This finding aligns with Anderson and Crowther (25) and Kingston et al. (21). The tendency to avoid negative emotions over time in people’s lives causes a defect in adapting to stressful situations. This means that the person avoids a situation or action to reduce their anxiety, which in the long run causes stress and anxiety (21).

This study suggested a positive relationship between the belief that a person deserves pain and punishment and attempting NSSI. This is consistent with Schoenleber et al. (26), Klonsky and Muehlenkamp (27), and Hooley et al. (28). People with a history of self-harm negatively evaluate their past and ability to act in the future and always consider self-criticism and expectation of failure in the outcome of things (26).

The current study indicated no significant relationship between greater accessibility to thoughts and mental associations with NSSI. This pattern is in agreement with previous studies on SI-IAT (29). Based on the cognitive view, the essence of learning and intelligence, in general, is the ability to represent different aspects of the world in his mind and then operate on these mental representations instead of the outside world. Also, according to the theory of the human mind, it is evoked by internal mental states such as beliefs, desires, or intentions. In fact, it can be noted that a person’s thoughts and mental associations can significantly impact his behavior and actions (30).

The current study is limited in that data were self-reported and cross-sectional, preventing the examination of causal hypotheses. This research was conducted on students, so the generalization of its results to other sections of society and people in other regions should be made with caution. It is suggested that to validate the findings of the present study, further research be done on students in other cities, variables be examined with a comparative approach in different samples, and more research be conducted on the translation and ambiguity of the questionnaire questions used in this dissertation.

The results of this study revealed that negative self-associations play a central role in attempting NSSI. This is consistent with the findings of research conducted in the field of self-injury. The results of this study provide a new guideline for designing prevention and treatment programs for self-injuring behavior. In this study, the computer test of implicit associations was used for the first time, paving the way for the next researchers to use this tool in the future. Iranian researchers have not studied the validity of the model of negative associations related to self-harm. Also, using the general mental health questionnaire in the section entitled Side Findings of the study, we tried to estimate the mental health status of the self-injured group and compare it with the non-self-injured group. Based on the findings of this study, NSSIs were highly correlated with each other and with suicide attempt, but our information about the time course of occurrence of these behaviors is obscure and limited. Accordingly, it is suggested to examine the course and time sequence of direct and indirect self-harm and suicide attempt in adolescents. It is also suggested that research with a comparative approach be conducted in different samples in other cities.

Copyright © 2022, Author(s). This is an open-access article distributed under the terms of the Creative Commons Attribution-NonCommercial 4.0 International License (http://creativecommons.org/licenses/by-nc/4.0/) which permits copy and redistribute the material just in noncommercial usages, provided the original work is properly cited.
download pdf 2.79 MB Get Permission (article level) Import into EndNote Import into BibTex
Number of Comments: 0