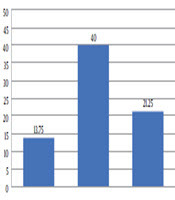 Candidiasis is a spectrum of opportunistic fungal diseases that can manifest in drug addicts in various forms, such as stomatitis.

This study aimed to determine the prevalence of oral candidiasis caused by Candida glabrata in addicts and examine the susceptibility of isolates to two azoles.

After taking oral samples from 131 drug addicts suspected of having oral candidiasis, Candida species were identified by culture on chromogenic Candida agar, carbohydrate-assimilation (API test), and polymerase chain reaction. The minimum inhibitory concentrations (MICs) of fluconazole and voriconazole against the isolates were determined using the broth microdilution method. Data were analyzed by SPSS (version 23) using the t-test and one-way analysis of variance. A P value of less than 0.05 was considered statistically significant.

Oral candidiasis was a common problem among drug addicts. In addition, the prevalence of azole-resistant C. glabrata isolates was high among these individuals.

Increased incidence of candidiasis, its epidemiological changes, and drug resistance highly justify the need to conduct studies on fungal infections. Pathogenic Candida species are found in both humans and animals. According to epidemiological studies, non-albicans Candida species are gradually replacing Candida albicans (1). Candida glabrata, formerly known as Torulopsis glabrata, is an opportunistic pathogenic yeast with a rising prevalence in immunocompromised individuals, such as HIV and cancer patients, transplant recipients, consumers of immunosuppressive drugs, and drug addicts (2).

Drug addiction is a global problem with serious health and financial consequences. Drugs can stimulate the brain’s reward system, causing it to produce excessive dopamine as a pleasure neurotransmitter. Either way, the brain reinforces the behavior of drug use with dopamine-induced pleasure. Addiction is not only an individual aspect but also a social threat. In addition to threats to the physical and mental health of individuals, it has irreparable harm to the social and economic aspects of society. According to the Diagnostic and Statistical Manual of Mental Disorders (DSM-IV), drug-related disorders are the problems associated with the use and abuse of drugs such as cocaine, heroin, and other substances that people have to change their thinking, feeling, and behavior (3). Patients with drug addiction have shown to have increased susceptibility to fungal infections. Also, drug abusers with a history of travel may serve as carriers of infection; thus, the fungal infection should be considered in narcotic users (4, 5). In addicts, Candida species can infect the oral cavity or bloodstream, thereby leading to severe infections (6).

Despite the increasing diversity of antifungal drugs, the efficacy of these agents for the treatment of fungal infections is not satisfactory (7). Azoles including fluconazole and voriconazole are among the most important antifungal agents used for the treatment of fungal infections. Voriconazole is commonly used for the treatment of fluconazole-resistant candidiasis (8). The drug affects the activity of cytochrome P450 and inhibits the demethylation of 14-alpha-lanosterol and ergosterol synthesis. This results in ergosterol depletion and accumulation of methylated sterols, which disrupt the cell membrane structure and function (9).

In this study, considering the drug resistance in fungal infections, we aimed to determine the prevalence of oral candidiasis in addicts and compare the antifungal activity of fluconazole and voriconazole against C. glabrata strains isolated from drug addicts with oral candidiasis in vitro.

In a cross-sectional study, 131 samples were studied from Oct 2017 to Dec 2018. The target population was drug addicts that used opium, opium sap, crack, naswar or methamphetamine (not alcohol) suspected of having oral candidiasis and recently admitted to three camps in Golestan Province, north-east of Iran. We selected those higher than 18 years of age. Addicts were identified and diagnosed based on the symptoms of bloodshot eyes, bad breathing, shakes or tremors, frequent bloody noses, or dizziness and headaches according to camps’ psychiatrists and urine/blood tests. Moreover, 131 samples were prepared from non-drug users with oral candidiasis as a control group. The mean age of the subjects was 21 ± 18 years. Moreover, all personal data such as the name and address of them were confidential and samples were identified merely with a special code.

Saliva or oral fluid samples were collected without stimulation. The samples were stored in sterile disposable containers and kept on ice for up to three hours. After a direct microscopic examination, the samples were cultured on Sabouraud dextrose agar containing chloramphenicol (Quelab, Canada) and incubated at 35ºC for 48 hours. The isolates were identified by methylene blue staining, culture on chromogenic Candida agar, and carbohydrate-assimilation test using the API120C AUX kit. The identification of Candida species was confirmed by molecular evaluation via PCR. The PCR was performed according to the instructions of Candida spp. detection kit (Iranian Gene Fanavar Institute, Iran) using 18S rRNA universal primers (Table 1).

The DNA was isolated using glass beads and the phenol-chloroform method. The PCR amplification was carried out in a final reaction volume of 25 µL containing 1 × PCR mix (19.7 µL), 0.3 µL Taq-DNA polymerase, and 5 µL of DNA sample. We also used PCR-negative and positive controls in the experiment. The mixture was vortexed for 3 - 5 seconds. The cycling conditions were as follows: 40 cycles of initial denaturation at 94ºC for 3 minutes, denaturation at 94ºC for 30 seconds, annealing at 52ºC for 30 seconds, extension at 72ºC for one minute, and a final extension at 72ºC for 5 minutes. The results were interpreted based on the kit instruction.

The minimum inhibitory concentrations (MICs) of fluconazole and voriconazole against Candida isolates were determined using the Clinical Laboratory Standards reference method for broth microdilution (NCCLS-M27-A3) (10). To prepare the drug stock solutions at the density of 256 - 0.5 µg/mL and 32 - 0.06 µg/mL for fluconazole and voriconazole, respectively, the powder of each antibiotic (Basel, Switzerland) was dissolved in distilled water and DMSO, in sequence, followed by a 1:100 dilution with RPMI medium (with glutamine, without sodium bicarbonate, pH indicator) (Sigma-Aldrich, USA). After preparing a yeast suspension (1 × 103 CFU/mL) from 48-hour cultures, the drug stoke solution and yeast suspension were equally inoculated into the wells of a 96-well plate containing the equal amount of RPMI medium. The lowest concentration of the drugs that inhibited the growth of isolates after 48 hours of incubation at 35ºC was determined as the MIC. The growth rate was assessed in comparison with the positive control (no drug) and negative control (no microorganism) wells.

Of 131 oral samples taken from addicts, 61.8% were identified as positive for Candida species. According to the phenotypic and genotypic assays, 65.4% of the isolates were C. albicans and the rest were non-albicans Candida species.

For analyzing the results after DNA replication, 10 µL of the multiplied product was loaded on the 1.5% agarose gel and TBE × 1 buffer without adding the loading buffer. One DNA marker was associated with samples for determining the size of bands that were then stained with the ethidium bromide gel (0.5 µg/mL). The images were generated by a UV DOC device. The presence of 620 bp fragments compared to the DNA size marker indicated that the test was positive, implying that the identiﬁcation of non-albicans Candida species was conﬁrmed (Figure 1). Candida glabrata isolates were the most frequent species (22.22%) among non-albicans species and more frequent among males, those aged 20 - 25 years, and opium addicts (Figure 2).

In the control group, 46.6% were identified as Candida species and 12% of the isolates were C. glabrata. There was a significant difference in the frequency of isolates between drug users and non-users (P = 0.01). Candidiasis is the most common fungal infection in the world. Candida is isolated almost invariably from cutaneous lesions, but rarely cultured from the blood or vitreous fluid. The sources of the fungus in these cases remain uncertain. Although some authors have suggested that Candida may contaminate heroin, attempts to culture Candida from heroin have been unsuccessful (11). The recreational use of illicit drugs has aroused concerns that drug abuse-mediated immune dysfunction increases host susceptibility to microbial pathogens. Opiates can also affect the immune system directly through opioid receptors on immune cells leading to reduced phagocytosis and chemotaxis. Endogenous Candida albicans endophthalmitis in injecting drug users has been extensively documented in the literature and is one of the most common ocular complications of drug use (12).

In the present study, we evaluated the prevalence of C. glabrata isolates in oral samples taken from drug addicts. The results showed that about 22% of the isolates were C. glabrata. Disruption of the mucosal defense or immune system can provide suitable conditions for opportunistic pathogens (13). In some studies, non-albicans species such as C. glabrata were the most frequently isolated Candida strains (14).

Previous studies reported C. glabrata, C. tropicalis, C. krusei, and C. parapsilosis as the main causes of mucosal fungal infections (15). Similar to our findings, a study of the oral mucosa of immunocompromised patients in 1998 reported the high prevalence of non-albicans Candida species, including C. glabrata (16).

The importance of non-albicans Candida species has become more profound due to the emergence and development of resistance to antifungal drugs in some of these species, such as C. glabrata and C. krusei, which has led to a dramatic increase in the prevalence of candidiasis. Hence, there is an urgent need for its detection and determining the frequency of resistant Candida species to help develop and implement effective control measures (17).

In our study, 61% and 44.4% of C. glabrata isolates were resistant to fluconazole and voriconazole, respectively. In 2006, researchers stated that 43% of the strains isolated from blood samples of hospitalized patients were C. glabrata. Of these isolates, 23% were voriconazole-resistant and 41% were fluconazole-resistant (18), which are less than the rates observed in our study. This difference can be attributed to the difference in the characteristics of the studied populations, the type of samples taken, the type of infections, and the presence of underlying diseases. This highlights the necessity of determining susceptibility to azoles and other antifungal agents. In some studies, C. glabrata was the least susceptible species to voriconazole. Likewise 60% of C. glabrata isolates were susceptible to fluconazole, and 92%, were inhibited by ≤ 1 µg of voriconazole per mL (19).

Similar to our findings, in a study in Spain on 21 male and female drug addicts, the prevalence of C. albicans and C. glabrata was 67% and 28.9%, respectively (6). However, the mentioned study examined only heroin addicts, while our subjects were addicted to various substances.

In the present study, the MIC90 value of voriconazole was 16 times less than that of fluconazole against these isolates. Nevertheless, there was no statistically significant difference between voriconazole- and fluconazole-resistant isolates.

A new formulation of antifungal drugs, combination therapy, and the development of new bioactive compounds may improve therapeutic outcomes. Regarding the use of combination therapy for the management of candidiasis, researchers demonstrated that a combination of fluconazole and Silybum marianum extract was four-fold more effective than fluconazole or the extract alone (7).

In general, determining the susceptibility of pathogenic fungi before treatment may be beneficial for improving treatment efficacy and preventing drug overuse and the subsequent drug resistance.

Our results demonstrated the high prevalence and high rate of drug resistance among non-albicans Candida isolates, particularly C. glabrata, among the studied population of addicts. Given the high prevalence of resistance to fluconazole and voriconazole in these subjects, there might be the need to use higher doses of the drugs for favorable therapeutic outcomes. Therefore, it is proposed to accurately diagnose infections in drug users and exploit combination therapy at low doses or seek novel antifungal agents for the treatment of drug-resistant candidiasis.

The authors would like to express their gratitude to all the colleagues who helped conduct the present research.