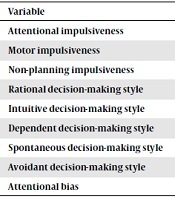 The Role of Impulsivity, Attentional bias and Decision-Making Styles in Risky Driving Behaviors

Road accidents are a major cause of deaths, injuries, and financial losses globally, especially in developing countries. Iran is one of the countries with a high rate of road accidents causing considerable damage in different domains. Therefore, in order to tackle this problem, we need to examine its causes.

The aim of the present study was to examine the association of risky driving behavior with impulsiveness, attentional bias, and decision-making styles.

Based on the study results, impulsivity, decision-making styles, and attentional bias as factors influencing drivers’ cognitive skills related to driving, could explain the increase in the frequency of risky driving behavior.

Road accidents and physical injury and post-traumatic stress disorder (PTSD) are among the significant threats to the wellbeing of people around the world. About 1.2 billion people annually die in road accidents. According to the World Health Organization (WHO), if immediate preventive measures are not taken, road accidents will become the fifth leading cause of death by 2030. In Iran, as a developing country, around 19000 people die, and 800000 people are injured in road accidents each year (1). Three types of factors are involved in road accidents: human, road, and the environment. Human error is regarded as the most important factor in road accidents that directly or indirectly influences driving performance (2). Among the human factors, the role of psychological factors has attracted considerable attention. For example, in recent decades, several studies have examined the role of cognitive factors in safe driving and have shown that examining these factors could help reduce road accidents and improve road safety (3). Some previous findings have revealed the role of such factors as impulsiveness, attentional bias, and decision-making styles in risky driving behaviors (4-6).

Barratt et al. designed a comprehensive, systematic theory for impulsiveness, encompassing biological, environmental, and cognitive factors. They distinguished between the three components of impulsivity: (1) motor impulsiveness (tendency to act without planning in advance), (2) attentional impulsiveness (inability to concentrate on an immediate task or cognitive instability), and (3) non-planning impulsiveness (lack of planning and forethought) (7). Previous studies have shown that drivers with a high level of impulsivity tend to react to stimuli more quickly, and they are more likely to drive in a dangerous manner (2, 8, 9).

Attentional bias is another cognitive factor influencing driving safety (10). Attentional bias is the tendency to be focused on a stimulus despite one’s efforts to ignore it. Research evidence indicates the important role of automatic processes, including attentional bias in reinforcement, maintenance, and recurrence of different types of normal and abnormal behaviors (11).

Decision-making is another cognitive factor that plays a vital role in driving (12, 13). Decision making styles are different ways of determining the effects of each decision and finding a solution based on the available information and related considerations (12). Harren’s approach includes three different styles: rational (making decisions based on logic), dependent (making decisions based on others’ beliefs and expectations), and intuitive (making decisions based on feelings and emotions). Philips, Pazienza, and Ferrin added the avoidant style (tendency to avoid or postpone decision-making) to Harren’s model (14). Various studies have demonstrated associations between risky driving behaviors and psychological factors, such as impulsiveness, attentional bias, and decision-making styles (5, 15-17).

Given the shortage of studies on this subject in Iran and the long history of exploring this issue in other countries, we decided to explore the role of cognitive factors in risky driving behaviors and to examine the association of impulsivity, attentional bias, and decision-making strategies with risky driving behaviors in Iranian drivers.

This was a descriptive-correlational study. The statistical population included all the male drivers in Tehran aged 20 - 34 years; among this population, 117 men attending car insurance companies in March 2018 in Tehran were selected as the study samples. The participants were selected using the convenience sampling method and based on the inclusion and exclusion criteria. The inclusion criteria were as follows: driving license obtained at least two years before the study and no history of brain damage, epilepsy, or psychiatric disorders. The exclusion criterion was a lack of consent to participate. After making the necessary arrangements, the drivers who met the inclusion criteria were included in the study. First, the Dot Probe Task was conducted, and then the questionnaires were given to the participants. Before collecting the data, the study objectives were explained to the participants, and they were reassured about confidential of their personal information. In addition, the participants were allowed to quit the study at any time. Data analysis was conducted using Pearson correlation coefficient and multiple regression analysis, and all the analyses were performed using SPSS, version 22.

The Barratt Impulsiveness Scale (BIS): It has 30 items rated on a 4-point Likert-type scale. The items assess three factors, including attentional impulsiveness, motor, and non-planning impulsiveness (18). Various studies have shown the validity and reliability of this scale (19, 20). The Persian version of the BIS was validated by Ekhtiari et al. They found Cronbach’s alphas of 0.845 and 0.831 for the total scale among people with substance abuse disorder and healthy people, respectively (21). In the present study, a Cronbach’s alpha of 0.83 was obtained for the BIS.

The Manchester Driver Behavior Questionnaire (DBQ): This questionnaire assesses aberrant driving behaviors (errors and violations). It has 50 items that are rated on a 5-point Likert-type scale. Aberrant driving behavior is classified into four categories, including errors, lapses, intentional violations, and unintentional violations (22). Parker and Reason examined the reliability of the questionnaire among 80 drivers using an eight-week test-retest examination and found correlation coefficients of 0.81 and 0.75 for errors and violations, respectively (23). In the present study, the Persian version of the questionnaire was used that had been previously validated in Iran (24). We found a Cronbach’s alpha of 0.94 for the questionnaire.

The Dot Probe Task: This is a computer-based task used to assess attention and vigilance to a specific stimulus (in the present study, we used neutral pictures related to risky driving). This Dot Probe Task was first developed by MacLeod using words (25). In Iran, Sarfaraz et al. reconstructed it using the emotional faces of Iranian people (26).

Table 3. Regression Analysis with Risky Driving Behavior as the Dependent Variable and Attentional Bias, Impulsiveness, and Decision-Making Styles as the Independent Variablesa

From biological and neuropsychological perspectives, people with an underactive BIS are less likely to recognize unpleasant stimuli and perceive them as threatening. People with an overactive BAS, due to being highly motivated to gain rewards, have difficulty in learning inhibitors, while people with an overactive BIS are highly sensitive to punishment (36). Sensitivity to reward may present itself in the form of traffic or rule violations that are observed in impulsive individuals, and sensitivity to punishment may present itself in the form of adjustment to the environment (37). In addition, damage to the orbitofrontal cortex (OFC) that is located in the ventromedial frontal cortex (VMF) leads to a type of motor impulsivity in which the person is not able to control their behavior and repeats a risky behavior despite learning the subsequent rewards or punishments. This is not true for a damage to the VMF that is limited to this region and does not spread out to the adjacent areas; people with this type of damage suffer from another type of impulsivity, called attentional impulsivity (38). As was pointed out in the Results section, and attentional impulsivity can predict risky driving behaviors. This finding can be explained from the cognitive perspective, according to which impulsivity refers to the lack of ability to inhibit impulses (36).

Various studies have reported that decision-making as a major cognitive function is related to behavioral inhibition (39) and that impairment in inhibitory control as an executive function, inability to refrain from instant rewards and impulsivity as an emotional state are powerful predictors of risky decision-making (40).

Regarding the relationship between decision-making styles and risky behaviors, it can be argued that risky behavior is characterized by dysfunction in attentional processing, meaning that people with risky behaviors only pay attention to affect-eliciting experiences such as winning or losing; therefore, they are not able to learn from their mistakes (41). On the other hand, it has been observed that decision-making problems in people with ventromedial damage is related to a kind of blindness to the consequences of actions in the future (i.e., paying more attention to instant gratification or less attention to harm) (42).

Finally, people with risky driving behaviors had increased response times in the Stroop test when presented with emotionally negative words. The reason behind this is that negative words require more attention compared to neutral words. Therefore, people with a higher response time in the Strop test tend to have more driving errors. This finding is explained by the fact that attentional bias results from the effects of emotions on cognition and that emotional state impacts driving conditions (15). In addition, the study results showed that negative emotional states influence the driver's traffic-dependent behavior and cognition. While negative emotions increase drivers’ perception of driving risks, at the same time, they increase their desire to engage in risky driving behaviors, such as speeding (43).

Overall, the study results indicated impulsivity, decision-making styles, and attentional bias as factors influencing drivers’ cognitive skills related to driving that can explain the increase in the frequency of risky driving behaviors.

The authors wish to thank Iran and Pasargad insurance companies for allowing us to conduct the sampling procedure in their branches in Tehran.