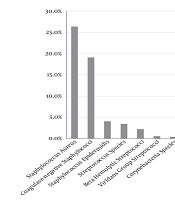 There are over one million patients with a prosthetic joint replacement in the United States. Majority of patients who receive joint arthroplasties are over 65 years of age.

There are no studies evaluating the best options for antibiotic management in prosthetic joint infection. It is important to evaluate alternative treatment modalities for this age group.

This is a retrospective study evaluating studies published between the years 2000 - 2019. Patients over the age of sixty-five with total joint replacement who had confirmed prosthetic joint infection and received treatment with oral antimicrobial treatment were included in the study.

A total of 409 patients were included in this study. 306 patients were successfully treated, whereas treatment failure was noted in 103 patients. Adverse events were only noted on 3 out of 7 studies. Of the events noted, renal failure was the most common and diarrhea was the second most common.

In the United States, there are over one million patients with a prosthetic joint replacement. Majority of patients who receive joint arthroplasties are over 65 years of age and it is important to evaluate alternative treatment modalities for this age group. There are no studies evaluating the best options for antibiotic management in prosthetic joint infection. Currently, roughly 500,000 primary joint replacements are performed annually in the United States (1). Although the rates of intraoperative joint infection is 0.5% to 2% following total hip arthroplasty and 1% to 3% following total knee arthroplasty, prosthetic joint infection (PJI) has the potential to cause significant morbidity and mortality (2). Due to higher rates of underlying comorbidities in the elderly population, PJIs are also more common in this population (3). Although the overall risk of infections continues to remain relatively stable across most medical centers, the number of people living with a prosthetic joint is expected to reach over four million over the next ten years (1, 4).

Treatment modalities available for patients includes conservative management with prolonged suppressive antibiotic therapy (PSAT) for patients who do not meet criteria for surgical management. Conservative surgical management is defined as debridement, irrigation, and prosthesis retention followed by long term antimicrobial therapy. More extensive surgery may be required, involving one- or two-stage exchange, resection arthroplasty, arthrodesis, and amputation. The removal of implant involves either a one or two step exchange arthroplasty, where the removed implant is replace in the same surgery or in a separate surgery approximately 6 weeks later, respectively (5).

There are various options available for treatment. Most patients are started on intravenous antimicrobial therapy and transitioned to oral antibiotics regardless of patients’ age. This study aims to evaluate whether the elderly population would benefit from the use of oral antimicrobials instead of intravenous and then oral due to various reasons. Polypharmacy and drug-interactions are important topics to consider when starting elderly patients on intravenous antimicrobials. In addition, there are risks associated with peripherally inserted central catheters required for intravenous drug delivery. Data is currently limited regarding the effectiveness of intravenous versus oral antibiotic use in patients, especially in patients over 65 years of age. We will attempt to evaluate whether treatment with oral antimicrobials only will be an alternative option in patients over 65 years of age.

This is a retrospective study evaluating studies published between the years 2000 - 2019. Database used to gather the studies included PubMed and Medline. The inclusion criteria for this study included patients over the age of sixty-five with total joint replacement. Inclusion criteria also included patients who had confirmed PJI and received treatment with oral antimicrobials. A successful treatment is defined as resolution of active signs of infection and retention of prosthesis. Treatment failure is defined as recurrence of infection, removal of prosthesis, infection-related death, and/or lack of response to conservative therapy. Tolerance to antimicrobials and adverse events related to the use were also noted. Studies that were published before 2000 and studies that did not include patients over the age of sixty five were not included in this study. All the studies evaluated for our study is listed in Table 1.

Table 1. Oral Antimicrobial Use and Documented Response in Patients Over 65 Years of Age

Figure 1 summarizes the most common pathogens isolated in PJI. Staphylococcal aureus continues to be the most common cause of prosthetic joint infections across numerous studies. Most common pathogens isolated in PJI

Table 1 summarizes the seven studies involving patients over 65 years of age evaluated for this study. Among the studies included, not every study contained the clinical and pathological information for each patient, hence it is not reported in our table. The table lists the duration of treatment, treatment outcomes, and any adverse reactions noted. All patients, except one, received intravenous (IV) antibiotics prior to oral antibiotics. However, the duration of IV antibiotic use and the type of antibiotic differed with each respective study. A total of 409 patients were included in this study. 306 patients were successfully treated (75%), whereas treatment failure was noted in 103 patients (25%) (1, 3, 4, 6-9).

Adverse events were only noted on 3 out of 7 studies. Of the events noted, renal failure was the most common and diarrhea was the second most common with 8 and 7 reported episodes, respectively. Out of the 7 cases of diarrhea, there were only 2 cases of diarrhea caused by Clostridium dificile reported. Seven patients stopped treatment due to weariness, 4 reported unspecified allergies, and 3 patients experienced nausea. Two patients stopped treatment due to neurotoxicity and one due to hematotoxicity. None of the patients included in this study had to undergo removal of their prosthetic joints (1, 3, 4, 6-9).

As the rates of total joint replacement continues to increase with the growing aging population, various treatment modalities for prosthetic joint infections have been extensively evaluated due to its significant impact in morbidity, mortality, and healthcare expenditure. Most patients with prosthetic joint infections also undergo antimicrobial therapy for a given period of time regardless of whether or not they undergo a revision surgery. Currently, some patients are started on oral antibiotics alone while others are started on intravenous antibiotics and bridged to oral medications. The use of some oral antimicrobials, such as sulfamethoxazole/trimethoprim, ciprofloxacin, and rifampin, are used without the need for intravenous antibiotics because these drugs are able to penetrate to the bone and achieve adequate bactericidal concentrations above minimum inhibitory concentration (MIC) of pathogens. However, standard of practice of when to use oral versus IV has not been established. Because the use of intravenous therapy can come with issues regarding patient discomfort, patient non-compliance, barrier to access to care, issues with the PICC line, drug anaphylaxis reactions, drug interactions, polypharmacy issues, and restriction on classes of antibiotics available intravenously, we seek to evaluate whether patients might benefit from oral antimicrobials alone. These issues are especially concerning for elderly patients.

Currently, there is limited data on the use of oral antibiotics alone, especially for patients over 65 years of age. Barberan et al. reported the outcome of patients over 65 years of age with Staphylococcoal prosthetic joint infections who were treated only with long-term oral levofloxacin 500 mg and rifampicin 600 mg once per day. They found that efficacy of this treatment was higher in patients with shorter duration of symptoms and earlier diagnosis (6). In our study, we analyzed data collected from seven different studies that evaluated the response to long-term use of oral antimicrobials in patients over the age of 65 years old only. The goal of therapy is to attain a pain free, mobile joint (5). Aside from the exception discussed below, majority of the patients received IV antibiotics prior to beginning oral therapy. Only one patient was noted to have received only oral ciprofloxacin and with a recurrence of infection (7).

Overall, only 25% of patients experienced treatment failure. Treatment failures were mostly associated with a delay in starting treatment, especially if patients started treatment more than six months after the onset of symptoms of inflammation. Rates of treatment failure was lower in patients who started treatment within one month of symptoms (4, 6). Of the adverse events reported in our study, renal failure was the most common and diarrhea was the second most common. There were only 2 cases of diarrhea caused by Clostridium dificile reported. None of the patients included in this study had to undergo removal of their prosthetic joints. All of the patients evaluated in this study were over the age of 65 years old.

Prendki et al. reported “weariness” as a common complaint for their cohort. This is likely a common adverse event associated with the elderly that is likely not as commonly reported as some of the more objective adverse effects, such as renal failure (3). Weariness and fatigue may be secondary to toxic accumulation of the antimicrobials in elderly patients and their inability to clear the drugs efficiently. When choosing antimicrobials for treatment of prosthetic joint infections, several points must be taken into consideration, bactericidal action and limited adverse side effects, while maintaining the ability to reach effective bone and tissue concentration (10).

Given the lack of data on the sole use of oral antimicrobials, we cannot conclude whether treating patients over 65 years of age with only oral antimicrobial would be equally as effective as starting with IV therapy initially. Although there are benefits to only using oral therapy, further studies are needed to evaluate outcomes in patients who initially do not receive IV antimicrobials.

There are notable limitations to our study. The most significant limitation was the missing data from some studies regarding the outcomes for patients who only received oral antimicrobials and the tolerance to oral use only. Our data also contains a large variety of infecting organisms with variation in selection of antibiotic choice for therapy. There was also a lack of data evaluating outcomes of only oral antimicrobial therapy, as most studies evaluate therapy with IV and oral antimicrobials.

Due to the lack of data available, there is a need for prospective study that evaluates the response of oral antimicrobial therapy in the elderly. The benefits of oral therapy include the availability of outpatient treatment, lower risks of anaphylaxis reactions, and reduction of risks associated with peripherally inserted central catheter (PICC) line placement, such as supraventricular tachycardia. There is also an overall cost benefit since oral therapy will lead to lower cost of treatment, early discharge from the hospital, and lack of need for close monitoring. The disadvantages to oral therapy include higher rates of gastrointestinal intolerance and renal failure, especially in drugs like sulfamethoxazole/trimethoprim, which may affect the duration of antibiotic use. Oral antimicrobials also may not be beneficial in multi-drug resistant pathogens, such as in the treatment of pathogens with extended spectrum beta lactamases. There are limited cases published in literature that evaluates the outcome of oral therapy only, which makes it difficult to conclude whether oral versus IV would produce equivocal results. Therefore, we recommend continuing to determine whether patients are candidates for oral therapy only on a case-by-case basis depending on whether the antimicrobial selected for the pathogen is able to reach appropriate bone concentrations by oral use alone. In the future, prospective studies that evaluate outcomes and tolerance of oral antimicrobials in elderly patients in the treatment of prosthetic joint infections will be beneficial.

Copyright © 2020, International Journal of Infection. This is an open-access article distributed under the terms of the Creative Commons Attribution-NonCommercial 4.0 International License (http://creativecommons.org/licenses/by-nc/4.0/) which permits copy and redistribute the material just in noncommercial usages, provided the original work is properly cited.
download pdf 95.74 KB Peer Review Comments ( 92.01 KB) Get Permission (article level) Import into EndNote Import into BibTex
Number of Comments: 0