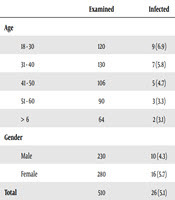 The study investigated the prevalence of HBV, HPV, and their co-infection in 510 outpatients of two major hospitals in both Kwara and Ondo States, Nigeria, employing the use of rapid serology assay diagnostic kit for HBV and HPV Enzyme-Linked Immunosorbent assay (ELISA) kit.

The overall preponderance rate of both infections was observed to be 11.4%, including 6.3% hepatitis B and 5.1% HPV. The co-infection prevalence was observed to be 0.58%. Females were more infected with HBV (6.8%) and HPV (5.7%) than male counterparts with 5.3% and 4.3%, respectively. Furthermore, married-single subjects had a higher rate of co-infection (1.4%) than their married counterparts (0.56%). The rate of infection between male and female genders was not significantly different (P > 0.05). However, the prevalence of HPV was statistically higher among married-single subjects (7.2%) (P < 0.05). The HBV and co-infection prevalence rates were statistically higher among married-single subjects with 8.7% and 1.4%, respectively.

The prevalence of HBV and co-infection with HPV observed in this study indicates the public health threats posed by these infections and further establishes the need for the Nigerian Health System to strengthen domestic initiatives that are strategically geared towards eliminating hepatitis and improving access to affordable diagnostics, enabling linkage to care and treatment of infected individuals.

Human papillomavirus and hepatitis B virus pose significant public health problems in developing countries such as Nigeria. These infections are quite endemic to most sub-Saharan African nations and have become major threats to preventive medicine (1).

Human papillomavirus (HPV) is one of the most common causes of sexually transmitted diseases in both men and women worldwide. Of many types of HPV, about 30 types can infect the genital tract through sexual contact. Genital HPV 16, 18, 31, and 45 account for more than 90% of cervical carcinomas (2-4). Cervical cancer and premalignant lesions make major problems in women’s health. It is the second most common cancer in women worldwide and is the most frequent cancer in many developing countries (5). In areas of the world where most women do not have access to regular gynecological care and screening, cervical cancer is second only to breast cancer as a cancer-related cause of death (2). Human papillomavirus has been implicated in 99.7% of cervical squamous cell carcinoma cases worldwide (3, 6). In women younger than 40 years, HPV was present in 89% of adenocarcinomas, whereas in women aged 60 years or older, HPV was observed in only 43% (7).

Hepatitis B virus (HBV), on the other hand, is another DNA virus that has become a major public health problem (8). The virus has caused serious epidemics in many parts of Asia and Africa. Despite the availability of universal hepatitis B vaccination, the HBV prevalence still remains a public health concern in Nigeria, one of the countries considered by the World Health Organization as being a hyperendemic region for HBV infection.

It is estimated that over 400 million people in the world are chronically infected with HBV (9, 10). Moreover, infection with HBV might be linked to an increased mortality rate, as chronic hepatitis B (CHB) is a leading cause of liver cirrhosis, liver failure, and hepatocellular carcinoma (10). Every 50 seconds, one person dies from the complications of this vaccine-preventable disease (6).

In addition to sexual contact and drug injection, the nosocomial transmission has also been reported as a risk factor for HBV infection (11). With an increase in invasive diagnostic and therapeutic procedures, the risk of health workers getting infected with the virus is also on the rise (12). It is, therefore, imperative for everybody, especially women of childbearing age, to be screened for these viruses regularly, as quite a number of them are unaware of their infections and do not benefit from clinical care, treatment, and interventions that are designed to reduce onward transmission.

Although the co-infection of hepatitis B and HPV has previously been reported in the Ceara region of Brazil (13), there seems to be very scanty information on the prevalence of co-infection in the African region.

The current study aimed at determining the co-infection of hepatitis B and HPV in both Kwara and Ondo States, Nigeria, specifically in the cities of Ilorin and Owo in the states, respectively.

A descriptive cross-sectional study was undertaken between March and August 2018 among subjects attending the general outpatient units of major federal hospitals in Ondo and Kwara States, i.e., the Federal Medical Centre (FMC), Owo, and the University of Ilorin Teaching Hospital (UITH).

The formula by Kuta et al. (14) was used to determine the sample size based on the expected prevalence of HBV and HPV, which was estimated at 5% according to (14) with a 95% confidence level and a precision rate of 5%.

The study was conducted at the Federal Medical Centre, Owo, Ondo State, and the University of Ilorin Teaching Hospital, Ilorin, Kwara State, Nigeria. The Federal Medical Centre is a tertiary health institution located in Owo, a city in Ondo State, within the South West Geopolitical Zone of Nigeria at latitude 7°00’ and 7°25’N and longitude 5°20’ and 5°45’E. The hospital serves as one of the major referral health care facilities to many states within its catchment areas including Ondo, Kogi, Edo, Ekiti, and Osun States. It receives patients from all states of the Federation because of its strategic location on the highway that links Abuja to Lagos; that is why it was selected as one of the sampling hospitals for this study. On the other hand, Ilorin is the capital of Kwara State located within the North Central Geopolitical Zone of Nigeria at latitude 8°30’N and longitude 4°33’E. Based on the 2006 census, the population was 777,667, making it the seventh-largest city by population in Nigeria. The University of Ilorin Teaching Hospital, which was used as a sampling hospital in Ilorin, is the major federal teaching hospital in the state and a referral center that serves people within neighboring states like Oyo, Niger, etc. The inhabitants of these two study locations are largely civil servants in various federal, state, and local government offices and parastatals. Farming, trading, and operation of small scale industries are other common occupations.

We only recruited 510 informed patients within the range of 18 and 65 years who agreed to take part in this study by signing consent forms.

Approval for this study and human ethics clearance were received from the Human Ethics Research Committee at the University of Ilorin Teaching Hospital, Kwara State, and the Federal Medical Centre, Owo, Ondo State. Duly informed consent was received from every patient and the patients were assured of the confidentiality of their data; thus, only de-identified records were accessed and analyzed.

We collected a 5 mL blood sample from each participant via venepuncture in a plain tube, held at room temperature for about 20 min. The samples were centrifuged at 5,000 rpm for 3 min for serological analysis and examination.

The DiaSpot rapid diagnostic test with manufacturer-reported diagnostic specificity, sensitivity, and accuracy of > 99.0%, 97.0%, and 98.5%, respectively, was used for the detection of the hepatitis B antigen in patients’ sera. The test was performed as described by Bomfim-Hyppolito et al. (13).

Data analysis was conducted using SPSS version 21 software for the computer (SPSS Inc. USA). The results of the analyses were expressed in percentages and the chi-square test was used for the statistical assessment. Significance was defined at P < 0.05

Out of the entire patient sample, a total of 26 (5.1%) patients tested positive for HPV (Table 2). A higher prevalence was observed in the female gender with 16 (5.7%) cases than in the male gender with 10 (4.3%). However, this difference between the two genders showed no statistical significance (P > 0.05). The 18 - 30 age group recorded the highest infection rate with 6.9% while the above 60 age group recorded the least infection with 3.1% prevalence. A P value of 0.002 (P < 0.05) was obtained that showed a significant difference between the age groups.

4.3. Co-Infection of Hepatitis B and Human Papilloma Viruses

Table 3. Seroprevalence of Hepatitis B Virus, Human Papilloma Virus, and Co-Infection by Marital Statusa, b

aMarried-single in this study refers to those subjects who are either divorced, widowed, or not divorced but staying separately from their spouses.

The findings of this study revealed an overall seroprevalence of 11.4%, including 6.3% hepatitis B and 5.1% HPV infections in the sample population. The 6.3% prevalence for hepatitis B observed in this study is lower than the 19.0% prevalence reported by Kolawole and Kana (15) among febrile patients attending general and specialty hospitals in Ilorin, Kwara State. Although lower prevalence rates have been reported for hepatitis B in some parts of Nigeria (15), the hepatitis B prevalence recorded in this study is consistent with the 6.5% and 6.0% rates earlier reported from the Northern and Southern parts of Nigeria, respectively (16-18). This consistency may be due to the similarity in the socio-demographic characteristics and laboratory methods used for the analyses. This finding further asserts that HBV is highly endemic in Nigeria.

Similarly, the relatively high prevalence of HPV infection (5.1%) could be due to the unsafe sexual lifestyles that might have characterized many of the married-single subjects, including keeping multiple sexual partners, practicing unsafe sex, and homosexual practices among others (10). In addition, because these subjects are either divorced, widowed, or even married but staying separately from their spouses, they are less likely to regularly visit a reproductive health specialist and thus, they are more likely to have little or no relevant information about these infections and will probably not be able to have access to preventive interventions available for women.

The study results also established higher infection rates of HBV and HPV among the 31 - 40 age group and 18 - 30 age group, respectively. This finding, in relation to HBV, is consistent with a similar study conducted in Nigeria by Abah and Udoidang (18). Inferentially, the higher infection rate of HBV and HPV in these age groups might be because of sexual activeness and possible involvement in certain types of unhealthy behaviors that could increase the risk of contracting the infections.

Furthermore, the findings further revealed a higher infection rate in the female gender than males for both HBV and HPV. This may be due to an increased risk of exposure to pregnancy in females, the cumulative years of sexual exposure, risky sexual behaviors, and vulnerability to sexual violence.

Nowadays, with the increasing rate of sexually transmitted viral infections among young adults, as also supported by the results of this study, it may become urgently necessary to legislate the development of new academic curriculums that consider sex education at all levels of education in Nigeria. However, adequate consultation with religious, traditional, and community leaders will be essential for the success of this kind of arrangement.

Additionally, the co-infection rate observed in this study was 0.53% for HBV and HPV. Although this might seem to be of low prevalence, the result strongly establishes the need for local and national actions to convene relevant regional stakeholders’ fora to rally more supports and interventions towards the prevention and subsequent elimination of these infections.

It is worthy of note that the present study had some limitations in terms of laboratory facility; hence, for HBV positive cases, it was impossible to differentiate between those that had a current acute infection and those with chronic or occult HBV infection, as hepatitis B core IgM serology and polymerase chain reaction were not carried out. However, the present study revealed that the significant distribution of hepatitis B and HPV infections in the study population was quite worrisome and this could pose a serious public health problem if stringent public health measures are not in place to curtail the further spread.

Copyright © 2020, International Journal of Infection. This is an open-access article distributed under the terms of the Creative Commons Attribution-NonCommercial 4.0 International License (http://creativecommons.org/licenses/by-nc/4.0/) which permits copy and redistribute the material just in noncommercial usages, provided the original work is properly cited.
download pdf 99.39 KB Peer Review Comments ( 127.46 KB) Get Permission (article level) Import into EndNote Import into BibTex
Number of Comments: 0