Our results showed the significant role of autoimmunity in the genesis of psychosis. On the other hand, unusual manifestations and slow response to treatment in these patients show that autoimmune disorders with psychosis may worsen the prognosis of psychosis.

Psychotic symptoms are seen in many autoimmune disorders such as lupus, rheumatoid arthritis, Sydenham chorea, Hashimoto encephalopathy, and vitiligo (1). It seems that elevation in IL-6 and anti-hippocampus antibodies in schizophrenia can exacerbate the negativism and weak response to treatment (2).

Vogt-Koyanagi-Harada (VKH) disease is a rare systemic disease with unknown pathogenesis, in which organs containing melanoblasts like ocular, inner ears, meninges, and especially skin are involved (3-5). There is controversy about the pathogenesis of VKH. Many researchers believe in the autoimmune basis for this disease because of the elevated blood level of interleukin B53, gamma interferon inhibitor, and increased IL-10 activity. Its protection against autoimmune diseases is significantly lower than normal subjects (3). Other researchers suggest that some viral infections may be the basis of pathophysiology; whereas the onset of the disease is with flu-like symptoms (4).

In this article, we present a patient with schizophrenia spectrum concomitant with VKH for the first time, and express the importance of the role of autoimmunity in the formation of psychosis. On the other hand, unusual manifestation and weak response to treatment in this patient showed that accompanying autoimmune disorders with psychosis can worsen the prognosis.

A 21-year-old male patient, single, with an associate degree from Zanjan, living in Tehran, referred to Taleghani hospital due to aggression and pessimism toward his family and neighbors. He had aggressive behaviors 3 - 4 years ago with his family and neighbors. He went out of the house, swore to neighbors and sometimes attacked them physically, talked to himself, usually felt someone was controlling him, and some mobs ask him to be part of their gang. Also, the patient had severe episodes of headache, redness, pterygium (blister in eyes), flashing of the eyes, and gradual loss of vision. Retinal angiography (Figure 1) showed focal necrosis points. Retinal sonography (Figure 2) showed changed signals and decreased height. In recent years, ocular symptoms and psychosomatic vitiligo appeared in the face and hands, which was under treatment. 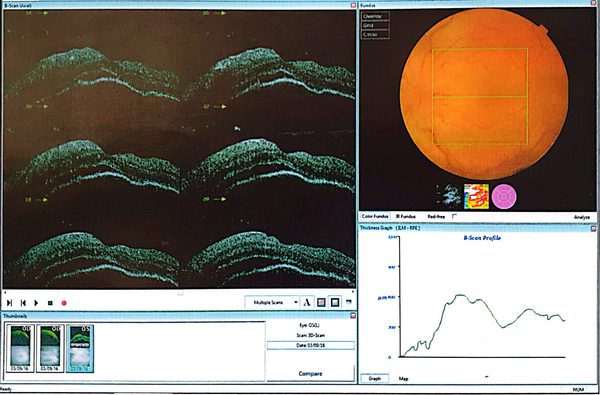 The ocular coherence tomography (OCT) image of the left eye has an irregularity in the thickness of the retina, and in the temporal side of the area, increased thickness can be seen along with the hypo area. 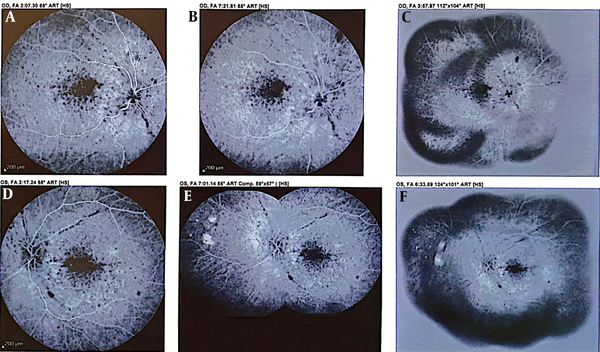 Fluorescein angiography of the retina of the right eye (top) and left eye (bottom). Areas of hypoperfusion are seen in both eyes, and a hyperfluorescent area, probably caused by fluorescein leakage, is evident in the peripheral retina of the left eye.

After extensive examination, based on the American Academy of Ophthalmology, VKH was diagnosed. Corticosteroids and immunosuppressive drugs started. The patient was treated as a diagnosed case of VKH. After each chemotherapy, both physical and psychotic symptoms improved. However, despite the improvement in the physical symptoms, the psychosis persisted after chemotherapy in recent months. In the medical history, the patient and his family did not mention any disease. He was completely normal as a child and teenager, with a normal social and educational function. His family did not mention a history of drug abuse, and none of his family members had a history of psychotic disorders.

In physical examination, the patient's mental status was limited to alexithymia and affect. The content of thought was grandiosity, delusions, reference delusion, passivity, and control delusion. Also, we noticed negativism and isolation. We considered psychotic disorder due to VKH according to Diagnostic and Statistical Manual of Mental Disorders, Fifth Edition (DSM-5) criteria. The differential diagnoses were drug-induced psychosis, schizophrenia, and bipolar disorder. In computed tomography (CT) scan and magnetic resonance imaging (MRI), we observed generalized cerebral atrophy inappropriate to age. Electroencephalography (EEG) and lumbar puncture (LP) study were normal, and only intracranial pressure changes (ICP) was reported high. IQ test was 87, in the weak-atypical range. Lab tests were negative for infections like hepatitis, toxoplasmosis, and borrelia. The patient underwent risperidone 2 mg bid, propranolol 20 mg bid, and trihexyphenidyl 2 mg bid treatment. At the same time, we prescribed prednisolone 5 mg and mycophenolate 500 mg for the underlying disease. After two weeks, treatment was partially responding. So, risperidone dosage was given higher up to 6 mg; but since the patient had an adverse effect, the dosage was reduced to 3 mg. After one month of hospitalization, the patient was discharged with partial improvement in general status.

In our patient, simultaneously with the onset of autoimmune symptoms due to VKH, symptoms of psychosis such as aggression, agitation, and self-talking had appeared. After the chemotherapy, psychosis symptoms improved, which can illustrate the common pathogenesis of these two diseases. In addition to these symptoms, mood swings, anxiety, and cognitive disorders were also obvious (1).

The role of the immune system in the occurrence of schizophrenia, mood disturbance, and pediatric autism has been identified in recent decades. There is some evidence showing the immune system may have a role in the pathogenesis of these three common psychiatric disorders. In schizophrenia, lymphocyte and cytokine’s role is obvious. In acute exacerbation or relapse episodes of schizophrenia, the levels of IL-2 and IL6 rise; but in the chronic disease, the ratio of CD4 to CD8 T-cells decreases, and antinuclear, anticytoplasmic, and antiphospholipid antibodies and other factors are seen (5).

The autoimmune mechanism induces changes in the release and uptake of some neurotransmitters, so this may have a key role in the occurrence of these three psychiatric disorders (5-7). A significant increase in the level of different autoantibodies is observed in schizophrenia, especially paranoid subjects (8).

VKH disease, or uveitis encephalitis is one of the extraordinary rare syndromes in those organs which have melanocytes involved. Ocular engagements are common; so one of the important manifestations is blindness due to uveitis (3).

Inflammation and immune system activity imply the pathophysiology of severe mental disorders (4, 5). An old study on inflammation markers showed that results have been contradictory and limited to a certain extent. The purpose of the study was to determine the effect of changes in inflammatory indexes in the psychotic diagnostic group (psychosis) and its relationship with antipsychotic drugs; the results showed that their method had a significant relationship between the inflammatory index and no antipsychotic drugs were used (5).

Our case had a known case of VKH, revealing psychosis symptoms in the course of the disease. There is no updated report about the accompaniment of vitiligo and psychosis so far. However, our case is the first one in this area. Another striking point for the accompaniment of psychosis with autoimmune diseases has been marked in previous studies (1).

Anyway, the fundamental question about not clear whether there is a relationship between autoimmunity and psychosis. Other unanswered questions include: (A) Is a common gene involved in the occurrence and association of these diseases?; (B) Are specific environmental stressors effective in the improvement and severity of the illness?; and (C) Is there any individual neuroendocrine transition or immune system responsiveness contributing to these symptoms?

This study had some limitations. First, the family was not evaluated for autoimmune factors. Second, the immune system and genetic status were not evaluated. However, this is the first study reporting the co-occurrence of the schizophrenic spectrum diseases with VKH, and a complete workup was performed. More case studies are necessary to answer the mentioned questions. It is hoped that identifying the underlying causes of the co-occurrence of these two diseases can prevent the occurrence of psychotic symptoms in patients with autoimmune disorders.

Copyright © 2022, Author(s). This is an open-access article distributed under the terms of the Creative Commons Attribution-NonCommercial 4.0 International License (http://creativecommons.org/licenses/by-nc/4.0/) which permits copy and redistribute the material just in noncommercial usages, provided the original work is properly cited.
download pdf 7.34 MB Get Permission (article level) Import into EndNote Import into BibTex
Number of Comments: 0