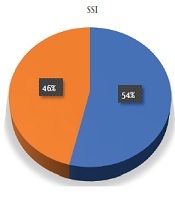 The study intended to characterize the incidence, etiology, and emerging resistance of SSI in a 1000-bed tertiary-care teaching hospital in New Delhi.

The ambispective study was conducted in a 1000-bed tertiary-care teaching hospital in New Delhi. Clinical, laboratory, and environmental surveillance and screening of health care providers (HCPs) were conducted using the National Healthcare Safety Network (NHSN) definitions and methods given by the US Centers for Disease Control and Prevention (CDC).

The rate of SSI in our study was comparable to the unadjusted rates in India, lower-middle, upper-middle, and high-income countries worldwide. Patients with pre-existing medical illness, prolonged operation time, and wound contamination are strongly predisposed to surgical site infection.

Surgical site infection (SSI) is defined as infection occurring after 48 hours of any surgical intervention affecting incised superficial tissue, deep tissue, or organ spaces at or around the site of surgery. Surgical site infection includes the most common healthcare-associated infections (HAIs) in surgical centers, accounting for up to 15% of HAIs. The analysis of 220 international studies of SSI in developing countries in the year 2010 showed the incidence of SSI as low as 0.4% to as high as 30.9%. The SSI rates in India vary from 6% to 38.7% (1-4).

Surgical site infection can result in fever, pain, discomfort, prolonged hospital stay, increased exposure to antimicrobials, and consequentially, increased healthcare costs. Meticulous surgical procedures of short duration taken place in a clean and hygienic environment and administration of prophylactic antimicrobials can decrease the risk of SSI. The risk of infection is higher during emergency surgery and minimal when the subcutaneous tissue is well perfused and oxygenated with no dead space. A large number of host factors such as diabetes mellitus, hypoxemia, hypothermia, leucopenia, long term use of steroids, nicotine, malnutrition, poor skin hygiene, etc. also can contribute to increasing the chances of SSI development (11, 12).

Periodic surveillance and feedback have been proven to reduce the rates of SSI. The United States Centers for Disease Control and Prevention (US-CDC) have given fresh guidelines on SSI in 2017 after feedback from the Healthcare Infection Control Practices Advisory Committee (HICPAC) (13).

This prospective study was conducted among all patients admitted to a 1000-bed tertiary-care teaching hospital in New Delhi for five months from May 2018 to September 2018, after approval of the Institutional Ethics and Scientific Committee. All good clinical practices and laboratory guidelines were observed. Patients staying less than 48 hours, testing positive for infections within 48 hours, or showing evidence of existing infections on admission were excluded.

Samples were collected from the site of SSI such as the incision site and drain fluid following strict aseptic techniques. The samples were immediately transported to a microbiology lab for cultures on blood and MacConkey agars and incubated for 24 - 48 hours at 37°C. Organism identification and antimicrobial susceptibility were done through standard microbiology techniques employing routine bacteriological methods, Kirby Bauer Disk Diffusion method, and/or VITEK-2 Compact Automated Microbiology system. Non-repeat positive cultures with respective antibiograms were utilized for profiling of isolates and antimicrobial susceptibility. The patient’s demographic profile was noted from the patient’s charts/requisition form.

The common sterilization methods were autoclaving, plasma-sterilization, and ethylene oxide. Various antiseptics used for hand-hygiene were Povidone-iodine scrub solution, Savlon scrub solution, and soap. Cefotaxime 2 gm or cefoperazone 2 gm was used as a prophylactic antimicrobial agent one hour before surgery for uncomplicated cases for both general-surgery and gynecological procedures. The mean preoperative hospital stay and postoperative stay of the patients were 6.57 ± 12.7 and 19.25 ± 7.92 days, respectively. Besides, 43/80 (53.75%, 95% CI: 42.3% to 64.84%) were males, with a male to female ratio of 1.16:1 (Figure 2). 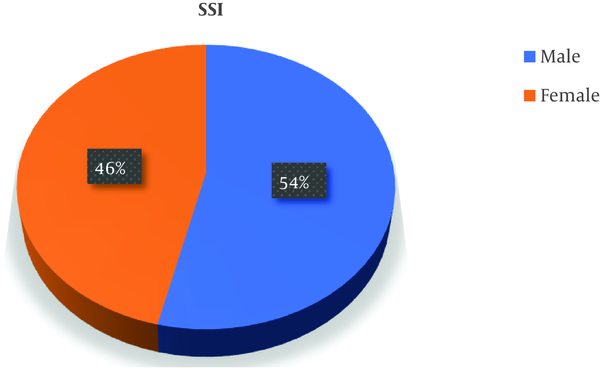 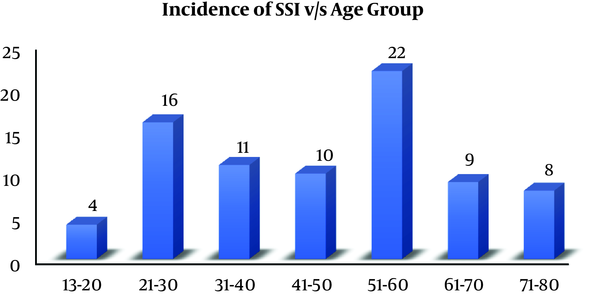 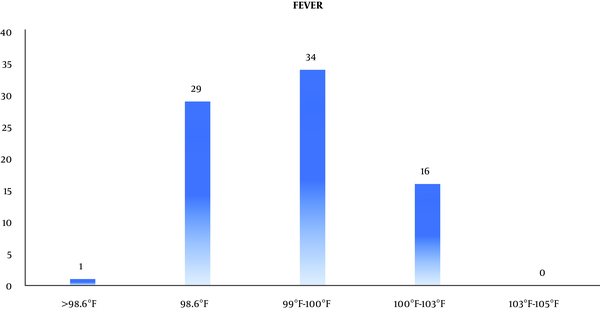 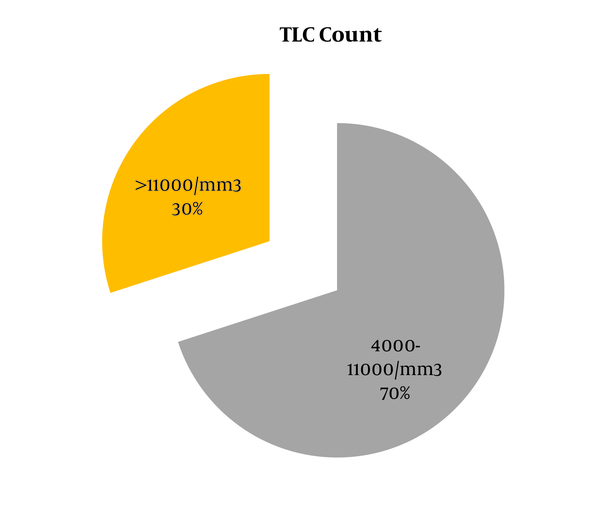 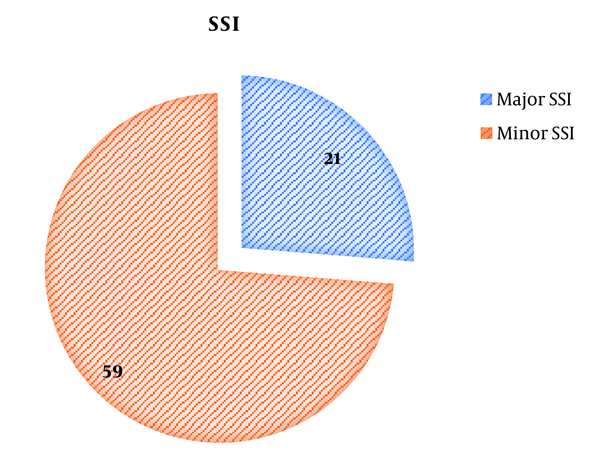 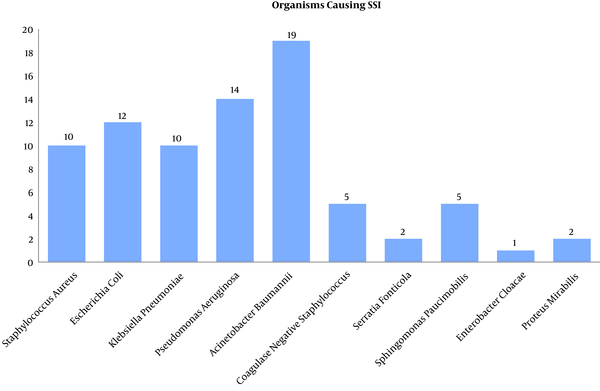 The overall incidence of SSI in this 1000-bed tertiary-care hospital was 2.6%, which is comparable to the rates in other studies in other parts of the world and India, i.e., 2.5% to 38.7%. There was a marginal preponderance of male patients (54%) over female patients (46%) developing SSI. In some studies, female preponderance was reported, but sex is not a pre-determinant factor towards the risk of SSI. The highest incidence was observed in the 51 - 60 years’ age group. Studies have reported that the increasing age independently predicted an increased risk of SSI until the age of 65 years, while at ages ≥ 65 years, the increasing age independently predicted a decreased risk of SSI. The average duration of surgery was 4.5 hours among patients who developed SSI. Prolonged operation time, increased exposure to the operation theater air, prolonged anesthesia, prolonged trauma, and sometimes, excessive blood loss can increase the risk of SSI. Certain conditions like hyperglycemia and hypertension predispose an individual to SSI according to various studies (14-17).

Gram-negative bacilli were predominant causes of SSI, with Acinetobacter baumannii at the rate of 19/80 (23.75%), followed by Pseudomonas aeruginosa with the rate of 14/80 (17.5%). This trend of gram-negative bacilli dominating gram-positive cocci has been observed in other studies (18-21). Acinetobacter species are oxidase-negative, opportunistic pathogens that have emerged as major causes of SSI in this setting. Acinetobacter has also been isolated from food (including hospital food), suctioning equipment, infusion pumps, sinks, pillows, mattresses, ventilator equipment, tap water, bed rails, stainless steel trolleys, humidifiers, soap dispensers, and other sources (22, 23).

Pseudomonas aeruginosa is a Gram-negative opportunistic pathogen found in moist environments like hospital water systems. Multidrug-resistant strains are associated with increased morbidity and mortality. E. coli, accounting for 15% of SSI in this study, is a Gram-negative intestinal bacterium responsible for the endogenous infection. In other parts of the world such as Turkey (22.8%) and Brazil (15.3%), E. coli has been the most prevalent pathogen in SSI. Klebsiella pneumoniae as a gram-negative multidrug-resistant organism prevalent in hospital settings was responsible for 12.5% of SSI in this study (24-26).

Staphylococcus aureus is a gram-positive coccus responsible for 12.5% of the total SSI in this study. It is accountable for a significant proportion of all SSI cases worldwide mainly affecting the skin and soft tissue. MRSA and vancomycin-resistant staphylococcus aureus (VRSA) in hospital settings are difficult to treat (27). The study was limited by short duration and limited sample size; however, it can aptly serve a pilot study for planning multi-center prospective studies on SSI to delineate etiology, prognosis, and prevention strategies.

The rate of SSI in this study was comparable to the rates in India and the world. A pre-existing medical illness, prolonged operating time, and wound contamination strongly predispose to surgical site infection. Antimicrobial prophylaxis, hand-hygiene, reduced duration of surgery, and drain care are effective in reducing the incidence of SSI. Periodic surveillance of SSI can guide infection control committees in process surveillance.

Copyright © 2020, Journal of Archives in Military Medicine. This is an open-access article distributed under the terms of the Creative Commons Attribution-NonCommercial 4.0 International License (http://creativecommons.org/licenses/by-nc/4.0/) which permits copy and redistribute the material just in noncommercial usages, provided the original work is properly cited.
download pdf 553.30 KB Get Permission (article level) Import into EndNote Import into BibTex
Number of Comments: 0