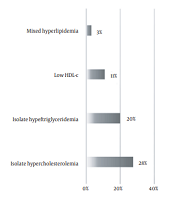 Dyslipidemia is a disorder caused by alterations in the plasma concentrations of one or more lipids/lipoproteins. It is considered a metabolic disease that exposes the body to various harmful and even fatal events, one of which is the increased risk for cardiovascular diseases. Military police officers, in turn, are exposed to high physical and psychological risks and may suffer from cardiovascular diseases more than other professions.

In this sense, the objective of the present study was to evaluate the lipid profile of military police officers working in a special operations group to identify the prevalence of dyslipidemia among the subjects.

In total, 65 volunteers participated in the study, members of a special operations battalion (37.26 ± 5.77 years of age). Blood collection was performed after 12 hours of fasting to analyze the following variables: Total cholesterol, triglycerides, LDL-c, and HDL-c.

The total cholesterol value presented the highest variation, since 77% of those evaluated showed altered values. Regarding the values of HLD, LDL, and triglycerides, most subjects (89%, 72%, and 80%, respectively) presented results within normal values

It can be concluded that most participants presented regular values for most of the analyzed lipid fractions, which could contribute to their demands during their work activities. It is believed that the positive results seen in this group, which is heterogeneous with respect to age, are due to an extremely rigorous selection process and a training program that elevates the individuals to the rank of elite soldiers within the Brazilian military police.

This disorder is considered a metabolic disease and can be classified as primary due to genetic factors or secondary, originating from an inappropriate lifestyle, or abusing certain substances and medications (2).

In this sense, the altered plasma levels of these lipoproteins expose the organism to several harmful and even fatal events, one of which is the increased risk for cardiovascular diseases, which is the cause of 30% of deaths in the world (1, 3).

The formation of atherosclerotic plaques occurs when the endothelium is already under attack, due to several risk factors (dyslipidemia, arterial hypertension, and smoking). Thus, this endothelial dysfunction increases the permeability of lipoproteins into the subendothelial space. In this space, LDL, for example, undergoes oxidation by free radicals, and once oxidized, it loses its identity and needs to be eliminated by monocytes, a fact that originates the so-called foam cells, from which toxic substances are released that damage the local tissue. As this inflammatory process progresses, high degrees of atherosclerosis can be formed (4, 5).

The deposition of lipoproteins in the arterial wall, a crucial process at the beginning of atherogenesis, occurs in proportion to the concentration of these lipoproteins in the plasma. This fact reinforces the importance of controlling/monitoring the lipid profile in the population (2), with special attention to the military due to their work activities.

Military police officers, in turn, are exposed to high physical and psychological risks since long working hours, shift variability, and activities carried out throughout the day are factors that contribute to this risk and, consequently, to stress. In addition to traumas, sprains, and fractures, the population formed by military personnel also suffers from cardiovascular diseases, which are highly present in contemporary society (6).

It is extremely important to evaluate risk factors that involve health, such as dyslipidemia, which has a great influence on cardiovascular conditions and affects the population, impairing quality of life and increasing expenses to the public health sector (1). Furthermore, in the case of populations that are exposed to high physical demand, both to prepare themselves and to exercise their function during the workday, attention to health parameters must be redoubled, especially in professions that bring an eminent risk, as in the case of police officers, which is intensified in the military personnel who belong to special operations groups.

The present study aimed to evaluate the prevalence of dyslipidemia in military police officers working in a special operations group.

The sample consisted of 65 volunteers with the following characteristics: 37.26 ± 5.77 years of age, 80.6 ± 10.01 kg of body weight, and 1.75 ± 0.05 meters in height, all males. The participants in this study are all members of a special police operations battalion and represent an elite group in the country (BOPE/RJ).

Blood collection was performed after 12 hours of fasting at the battalion headquarters. The subjects were instructed to remain at rest and not perform vigorous activities in the period before the analysis. As inclusion criteria, participants were required to be active in the group of special operations, have medical clearance, and agree to the ethical terms. As an exclusion criterion, individuals who left the study due to health problems or injuries were automatically excluded from the analyses. The right of any officers who did not wish to participate in the research was preserved.

The Ethics and Research Committee of the School of Physical Education and Sport of Ribeirão Preto EEFERP/USP (n. 3,230,057) approved the current study. All participants signed the free and informed consent form (ICF), and the researchers answered all questions concerning the objectives of the research.

The venous blood was collected by puncture of the blood vessel through the anterior aspect of the forearm. Prior to collection, the forearm was properly disinfected with 70% ethanol. Subsequently, we collected 5 ml of whole blood in tubes to separate the sera and stored them at 0 to 4°C immediately. Then, we centrifuged the samples at 0 to 4°C at 3,000 rpm for 15 minutes to isolate the sera. The sera were stored in 1.5 mL tubes at -80°C. The remaining contents of the collection tubes were disposed properly.

Total cholesterol, triglycerides, LDL-c, and HDL-c were assayed by the enzymatic Trinder method using blood serum. An authorized laboratory dosed them in Rio de Janeiro city -CNPJ: 07.727.43/0001-60- License: 1402. The anthropometric evaluation of weight and height was performed using a stadiometer with a 0.1 cm measurement scale and a Plenna digital scale, model MEA-07400, respectively, with an accuracy of 100 g.

The new update of the Brazilian Guideline for Dyslipidemia and Atherosclerosis Prevention published in 2017 changed the laboratory classification and reference values of dyslipidemias, with therapeutic targets based on individual cardiovascular risk and dietary status (2) (Sociedade Brasileira de Cardiologia, 2017). Dyslipidemias are classified according to the altered lipid fraction as:

The same guideline recommends that desirable fasting cholesterol values are < 190.

The data were analyzed using descriptive statistics (mean; standard deviation) and compared to the reference values for each lipid/lipoprotein, framing each individual in their classification range. SPSS 22.0 software was used for statistical analysis.

Table 1. Mean and Standard Deviation of the Variables

The total cholesterol value was the only one in which the majority (77%) of those evaluated showed altered values. Regarding the values of HLD, LDL, and triglycerides, 89%, 72%, and 80%, respectively, presented results within normal values. Table 2 presents the results in relation to the variables analyzed in the present study.

aSource: Elaborated by the authors

Regarding the classification of dyslipidemia, the military presents the following results (Figure 1), considering the update of the Brazilian Guideline for Dyslipidemia and Atherosclerosis Prevention (Sociedade Brasileira de Cardiologia, 2017): 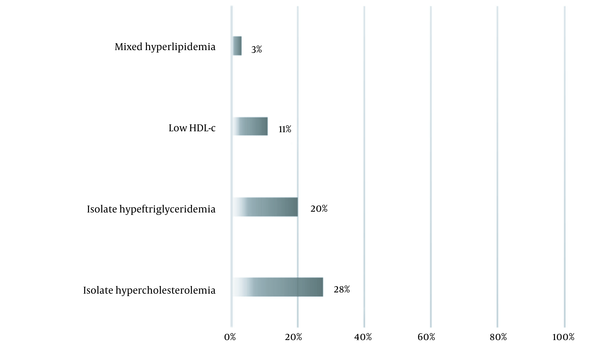 The main finding of the present study was verification that military personnel belonging to special operations of battalion presented a lipid profile within acceptable parameters for most of the analyzed liquid fractions (except total cholesterol). In addition, the military personnel showed a low index of classification for the classes of dyslipidemia, despite a routine of work activities characterized by high physical and psychological demands, and work shifts that hinder an adequate dietary routine.

An interesting study with military police officers observed that the results of hypertriglyceridemia (49.1%), low concentrations of HDL-c (56.9%), and high serum LDL-C (46.1%) were associated with alterations in BMI (P < 0.05) (7).

Only 11% (7/65) of the individuals evaluated in the present study had low HDL-c values, which is the result of a better classification of the sample and is very satisfactory when compared to other studies mentioned above. However, comparisons with studies involving military police from other locations are unrepresentative of the reality of the group analyzed in the present study, since our volunteers are active in an elite battalion and have differentiated training, labor issues, and physical demands. Thus, the current study is unprecedented in that it involves the best battalion of the Brazilian military police, which makes it difficult to discuss the results and make comparisons with the literature.

The number of individuals classified as having some type of dyslipidemia was low, as shown in Graph 1. Regarding the classes of dyslipidemia, the highest incidence was isolated hypercholesterolemia, in 25% of the sample, followed by isolated hyperlipidemia 17%, low HDL-C 11%, and mixed hyperlipidemia, only 3%. Although the values are low, they do not take away the responsibility of the researchers to inform the battalion about which individuals presented values outside the normal ranges. Therefore, support was offered for individual assessments of those most in need, with a multidisciplinary team of researchers, including nutritionists, physical education professionals, a pharmacist, and a doctor, to assist in possible adjustments after completion of the research.

It can be concluded that most of the participants presented regular values for most of the analyzed lipid fractions, a fact that could contribute to the demands of their work activities. Those who presented values outside a normative standard were approached individually by the research team to offer feedback and support after the research was carried out. We suggest that the positive results obtained from this heterogeneous group, concerning age group, resulted from an extremely rigorous selection process and a training program that enhanced these persons to the rank of elite soldiers of the Brazilian military police.

Copyright © 2022, Journal of Archives in Military Medicine. This is an open-access article distributed under the terms of the Creative Commons Attribution-NonCommercial 4.0 International License (http://creativecommons.org/licenses/by-nc/4.0/) which permits copy and redistribute the material just in noncommercial usages, provided the original work is properly cited.
download pdf 171.91 KB Get Permission (article level) Import into EndNote Import into BibTex
Number of Comments: 0