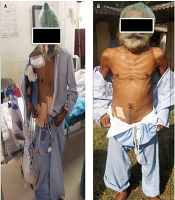 On physical examination, the patient is thinly built with body mass index (BMI)-19.6 kg/m2. His abdomen was distended, and he had rebound tenderness in his right lower quadrant. Bowel sounds on auscultation were sluggish. External hernial orifices were normal, and digital rectal examination findings were unremarkable. His pulse rate and blood pressure were 94/54 mmHg and 130/min, respectively, according to his vital signs. He was afebrile but dehydrated. Pallor was present. He had no Icterus. Nasogastric aspirate was feculent. 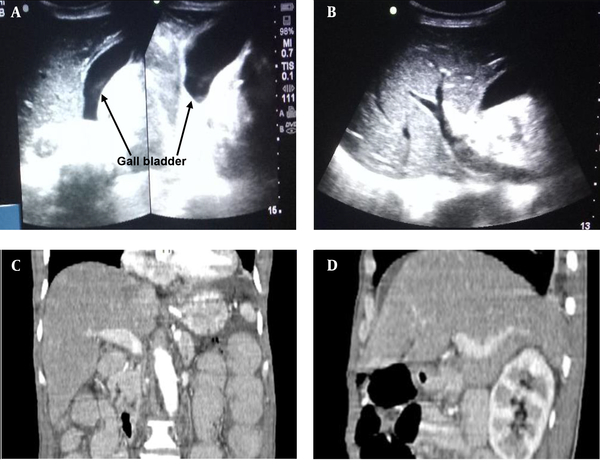 USG and CECT abdomen show normal hepatobiliary and portal anatomy without any evidence of obstruction, wall erosion or destruction, focal lesion or any bilioenteric fistula. These proved that the described stone in our case report was a primary enterolith and it did not originate from gall bladder; A, transabdominal USG showed empty GB lumen, normal CBD, normal portal vein and biliary radicals, no evidence of aerobilia or obstruction; B, transabdominal USG showed no direct or indirect evidence of bilio-enteric fistula (aerobilia), no evidence of erosion or destructions of wall; C, CECT abdomen (coronal plane) showed enlarged liver (17.5 cm). No evidence of any focal lesion was seen. GB distended. No intra luminal calcific density seen; D, CECT abdomen (sagittal plane) showed normal portal radicals and hepatic veins. Biliary radicals and CBD are not dilated. No aerobilia was observed. 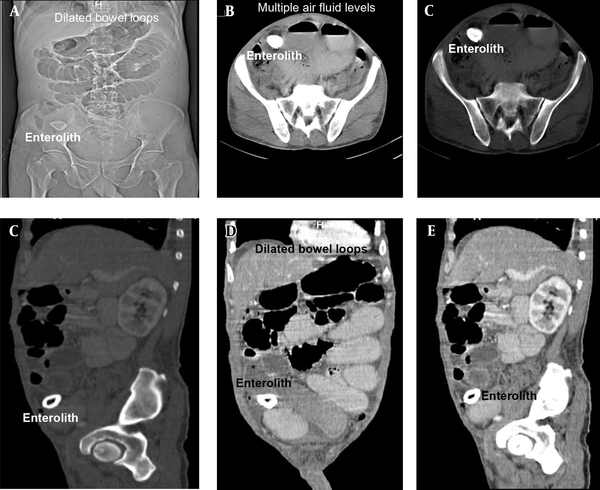 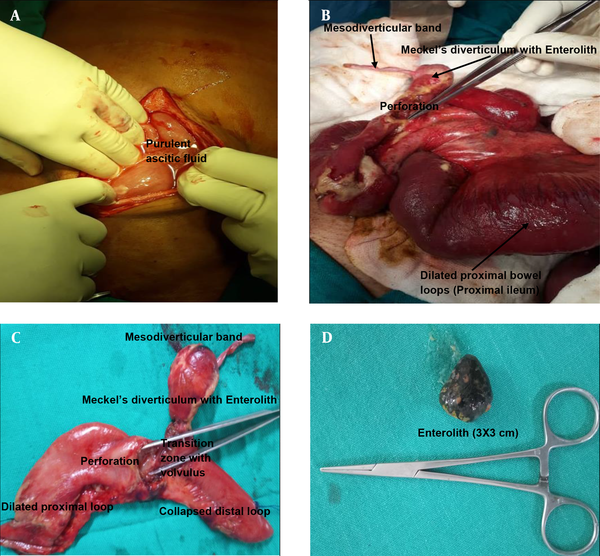 Adhesiolysis was carried out and untwisted the ileal volvulus. Resection of 10 cm segment of ileum along with Meckel's diverticulum was done, and primary anastomosis was carried out (side to side, four layers, hand-sewn). Drain was placed, and abdomen closed. Parenteral nutritional was provided in immediate postoperative period. Early oral feeding commenced as soon as the patient passed flatus as per enhanced recovery after surgery (ERAS) protocols. Patient was discharged to home on postoperative day-10. HPE report confirmed Meckel’s diverticulum with perforation. No heterotrophic mucosa was seen (Figure 5). 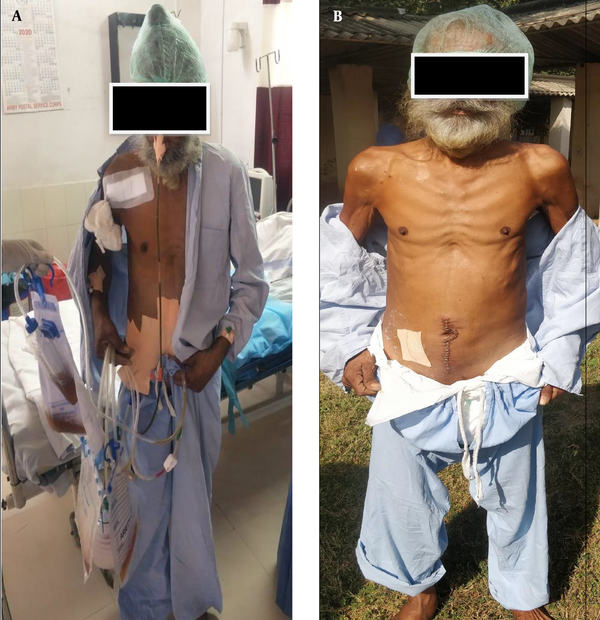 Various complications can result from an enterolith, such as obstruction (6), diverticulitis (6), injury to the bowel mucosa (6), perforation (6), afferent loop syndrome (9), intussusception (10), gangrene (6), hemorrhage (6), and iron deficiency anemia. An enterolith-related intestinal obstruction due to Meckel’s diverticulum has rarely been reported (11). A diverse range of obstruction can exist besides enterolith, including the trapping of a bowel loop by a mesodiverticular band, the volvulus of diverticulum around the band, and intussusception (1, 12). As the yolk sac atrophies, one of the vitelline arteries degenerates, while the other develops into the superior mesenteric artery (13). A peritoneal-covered fibrous band forms when one of the vitelline arteries fails to degenerate, and this peritoneum-covered fibrous band is known as mesodiverticular band (13).

Kuru et al. (14) also reported a small bowel obstruction that was caused by mesodiverticular band. However, acute small bowel obstruction due to both mesodiverticular band and primary enterolith in Meckel’s diverticulum is rarely seen. In our case during pre-operative evaluations, the patient was anemic, but he denied any history suggesting lower gastrointestinal bleeding. Rectal examination findings were unremarkable. USG abdomen and CECT abdomen showed distended GB without any stones inside the lumen (Figure 2). There was no direct or indirect radiological evidence of bilioenteric-fistula (Figures 2 and 4). These proved that the described stone in our case report was a primary enterolith, and it did not originate from gall bladder.

Enterolith in our case report showed peripheral calcifications and radiolucent center on X-ray and CT (Figures 1 and 3), which again proved that stone was primary enterolith. Similar findings of peripheral calcifications and radiolucent center were also shown in another study by Higginson and Hall (15). Thus, both primary enterolith in Meckel’s diverticulum and a mesodiverticular band were the causes of acute small bowel obstruction and perforation in our case. The prolonged stasis might be the cause of enterolith formation in Meckel’s diverticulum. To the best of our knowledge, our case is the first case of its type, involving both Meckel’s primary enterolith and mesodiverticular band in causing acute small bowel obstruction and perforation. In such a scenario, an exploratory laparotomy was a life-saving measure. Although the rest of the bowel was healthy, resection and anastomosis were carried out. We followed early oral feeding for the patient as per ERAS protocols during post-operation.

It is extremely rare for Meckel’s diverticulum, Meckel’s primary enterolith, and mesodiverticular band to cause acute obstruction and perforation of small intestines. It requires prompt evaluation and exploratory laparotomy. Prompt evaluation and treatment may significantly affect morbidity and mortality. Hence, our case report underlines that combined involvement of Meckel’s primary enterolith and diverticular band in causing acute bowel obstruction is extremely rare, but these can be one of differential diagnosis for small bowel obstruction.

Copyright © 2022, Journal of Archives in Military Medicine. This is an open-access article distributed under the terms of the Creative Commons Attribution-NonCommercial 4.0 International License (http://creativecommons.org/licenses/by-nc/4.0/) which permits copy and redistribute the material just in noncommercial usages, provided the original work is properly cited.
download pdf 20.55 MB Get Permission (article level) Import into EndNote Import into BibTex
Number of Comments: 0