Successful Management of an Atrioventricular Nodal Re-entrant Tachycardia in a Neonate: A Case Report

The most common tachyarrhythmias in fetal cases is supraventricular tachycardia (SVT); atrioventricular nodal re-entrant tachycardia (AVNRT) type. Premature delivery, neonatal complications, and mortality following fetal SVT are high, and therefore, require proper management. Hereby, we introduce an AVNRT that was diagnosed in the fetus and adenosine infusion, and propranolol tablets were initially administered, but arrhythmia was not controlled; eventually, the tachycardia was controlled with flecainide tablets. She was discharged with the prescription of propranolol and flecainide tablets. She is currently 18 months old and under follow-up.

The fetal heart develops arrhythmias and conduction disorder, which can be caused by ischemia, inflammation, electrolyte disturbances, structural defects, inherited genetic conditions, and many other causes (1). The most common tachyarrhythmias in fetal cases is supraventricular tachycardia (SVT); atrioventricular nodal re-entrant tachycardia (AVNRT) type (2, 3). SVT in pregnancy is specified as any tachyarrhythmia with a heart rate (HR) more than 220 beats/min (4). Premature delivery and neonatal complications, and mortality following fetal SVT are high, and therefore, require proper management (5). If the arrhythmia persists and proper action is not taken, fetal hydrops and fetal death occur in 30 - 40% and 8 - 9%, respectively (6). Digoxin is currently the first line, and adenosine, beta-blocker is the next step in treatment of SVT (1, 6). Due to the fact that our patient was diagnosed in the fetus and continued after birth and was also resistant to treatment, and finally, her tachycardia was controlled with flecainide, so we report the patient.

Hereby, we introduce an AVNRT that was diagnosed in the fetus, and it continued after delivery, and eventually was controlled.

A 40-year-old female with gravidity3-parity3-labor 2 (G3P3L2) and gestational age (GA) of 33 - 34 week was referred to the hospital due to fetal tachycardia. He had no history of decreased fetal movements or anything else in recent days. The fetus is growing normally and has no history of fever or thyrotoxicosis or drug overdose, or caffeine overdose. The first and second children were six and three years old, respectively, healthy, and the result of normal pregnancy. Maternal vital signs and cardiovascular examinations were normal at the time of referral. Non-stress test (NST) performed from the fetus at the onset shows an HR more than 240 beats/min. Ultrasound showed an active fetus and appropriate to gestational age. There was no abnormal amniotic index or pleural or pericardial effusion and ascites.

Fetal echocardiography revealed normal heart structure with mild to moderate tricuspid regurgitation, mild cardiomegaly, and fetal heart rate (FHR) at 235 beats/min. Other findings include relationship between atrial and ventricular contractility 1: 1 and short RP interval less than 100 msec. Also, other large valves and arteries were normal and situs solitus (abdominal and chest organs in normal position) (Figure 1). The diagnosis of SVT; AVNRT rhythm in the fetus was confirmed, and therefore an electrocardiogram (ECG) was taken from the mother, and the electrolytes were checked and then intravenous digoxin begun at a dose of 500 μg every eight hours for 24 hours for the mother, and then tablet digoxin 250 μg was started every eight hours as a maintenance dose. Serum maternal Digoxin level, serum electrolytes, urea, and creatinine were checked during treatment, and ECG monitoring was performed. Tachycardia was controlled and no recurrence of fetal tachycardia was seen after seven days of starting treatment. She was discharged, and we advised to check the blood level of digoxin every other day. The patient was referred to the hospital with a recurrence of fetal tachycardia from the gynecological clinic after three days of discharge from the hospital. NST showed an FHR more than 220 beat/min. According to the continuation of tachycardia and based on echocardiographic findings, pediatric cardiologist and gynecologist recommended termination of pregnancy. The boy was born via cesarean section with GA of 34 weeks, body weight of 2510 g, and apgar score of 9/10. The neonate HR was within the normal range (140 beats/min), and he was transferred to the neonatal intensive care unit (NICU) for cardiac monitoring. At hour 18 of birth, the HR was 230 - 240 beat/min. The ECG confirmed the SVT; AVNRT rhythm (Figure 2). Adenosine infusion as 0.1 mg/kg was administered, and sinus rhythm was observed. AVNRT recurred two times, and adenosine was administered. Due to non-control of tachycardia after three doses of adenosine, propranolol tablets were started at a 1 mg/kg every eight hours. Tachycardia continued for two days when flecainide tablets were started at 2/5 mg/kg/day divided into three doses. On the third day, tachycardia was controlled. Finally, we found no cause for the patient’s arrhythmia. The patient was discharged in good general condition and normal examinations with an HR of 144 after the prescription of propranolol and flecainide tablets. The patient was visited first every month and then every three months, and was evaluated for drug side effects and recurrence of arrhythmia using clinical signs and ECG. After that, the SVT was not recurrent; therefore, the medication stopped at the age of 13 months, and he is currently 18 months old and under follow-up. 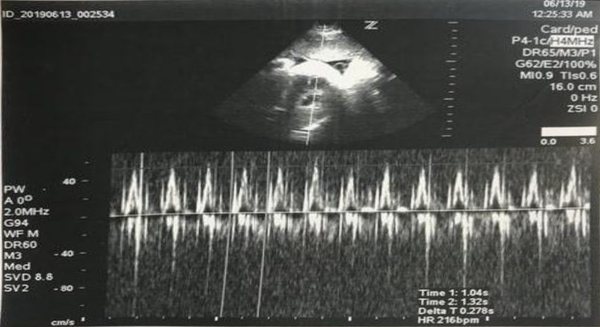 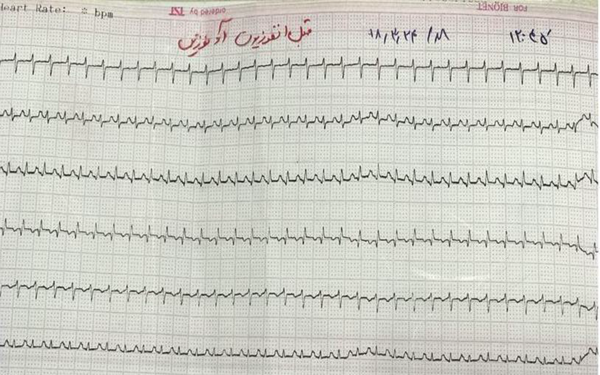 In our study, the diagnosis of SVT was done in a fetus that remained uncontrolled after delivery, despite appropriate treatment according to previous studies. Arrhythmia was not controlled after birth despite treatment with adenosine, digoxin, and beta-blockers as first-line drugs for tachycardia. Finally, we controlled the arrhythmia with flecainide, that has been used in patients with hydrops fetalis according to previous studies (1, 6, 8).

The treatment of fetal SVT depends on its etiology, and sometimes observation alone might be the best option, especially when the tachycardia is near to sinus rate (8, 9). The first line of treatment for fetal SVT is digoxin, and flecainide is preferred if the fetus has hydrops fetalis (1, 6). Due to this point, we used digoxin for our patient. The time to convert an SVT to a sinus rate has been reported as 14 days (10-12). In our patient, since three days had passed from starting the digoxin and there was no appropriate therapeutic response, we had to terminate the pregnancy. Beta-blockers, such as propranolol, are not proper for pregnancy due to increased uterine tone and uterine contractions and are suitable drugs for the neonate infant (8, 13). Although adenosine was not effective in our patient after delivery, many studies have reported adenosine as the most effective and safest drug for AVNRT in neonates and infants (14, 15). Yet, propranolol and flecainide are also effective treatments in pediatric arrhythmias, as were beneficial in our patient (16, 17). This study showed that AVNRT is sometimes not easily controlled, contrary to previous perception, and that flecainide can be used as a suitable drug for these patients.