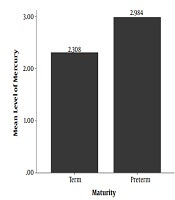 Mercury is a one of the pollutant that can cross the placenta. Contamination by mercury in mothers and their neonates is associated with many problems.

This study aimed to compare mercury levels of cord blood in term and preterm neonates in Akbarabadi Hospital, Tehran, Iran, 2014.

In this analytical cross-sectional study, we evaluated 50 term and 50 preterm neonates who were born in Akbarabadi Hospital in 2014. Necessary information including mother’s age, location, mother’s job, use of amalgam, use of fish, use of blood products and level of mercury were collected. Data were entered into SPSS V.16 and analyzed.

Mercury is an odorless, silvery white, shiny, electric, heat insulating heavy metal, and there is a large amount of this metal in the outside environment and sea foods (1). It is a one of the pollutants which has well-characterized neurodevelopmental toxicity (2). Commonly, exposures to mercury are first to methylmercury (MeHg) through use of infected fish (2, 3). Many maternal conditions during pregnancy can affect the newborn (4). Exposures during prenatal and perinatal period are an important concern because mercury can cross the placenta (5, 6). There is a positive correlation of Hg in paired maternal/fetal samples (7). Studies on laboratory animals have shown that in mothers who had exposure to mercury, the amount of this metal in the liver of the fetus reached the level that concluded mercury can freely pass the placenta (1).

The human body is exposed to mercury through the environment, atmosphere, dental amalgams, and diet especially fish (3). Mercury poisoning can be described as an event that does not occur normally, but when it happens it can be risky and problematic (8). Mercury poisoning is demonstrated with symptoms such as pain, erythema in palms and feet, irritability, sleeplessness, loss of appetite, excessive sweating, sensitivity to light and skin rash (8, 9).

Urinary mercury concentrations above 20 µg/L, should be considered as high level, although there is no precise and absolute relationship between urinary mercury concentrations and clinical symptoms. Mercury levels higher than 150 µg/L are associated with non-specific symptoms and in the level of higher than 300 µg/L clear and specific signs are seen (8, 10, 11). Mercury levels in blood, not in serum; in general population is typically less than 5 µg/L (12).

Although moderate mercury levels in pregnancy were not associated with anthropometric variables, or on the odds of low birthweight or preterm birth (13), but consumption of seafood with high levels of mercury during pregnancy can cause a decrease in the evolution of the nervous system (14). Also pollution with high levels of mercury in postpartum is associated with defects in the nervous system (15); although research on people who are involved with amalgam in workplace or mothers who fill their teeth during pregnancy does not show a discernable effect on risk of spontaneous abortions, birth defects or reduced birth weight (16, 17). Exposure to toxic mercury in children may lead to the impairment of the developing central nervous system and pulmonary as well as nephrotic damage.

Despite the importance of this issue, very little studies on mercury levels in cord blood of newborn infants has been conducted. This study aimed to compare mercury levels of cord blood in term and preterm neonates in Akbarabadi Hospital in Tehran, Iran, 2014.

This research was an analytical cross sectional study which was done on newborn babies who were referred to Shahid Akbarabadi Hospital in 2014. All infants who had inclusion criteria were recruited in this study until the completion of sample size. Inclusion criteria consisted of mother’s consent to participate in research projects, singleton pregnancy, maternal age between 18 to 35 years, number of pregnancies of less than 3, and no evidence of genetic and chromosomal defects. Patients were excluded if there was sonographic evidence of growth defects, history of stillbirths and abortions in mothers and history of preeclampsia in a previous pregnancy, mothers who consumed a special drug that had an effect on the response, as well as mothers who had a specific illness were excluded from the study. Also, those pregnant women that filled at least two teeth before pregnancy were examined. Those who filled during pregnancy or filled maximally one tooth were excluded.

Finally, after evaluating infants from the point of these criteria, 50 term and 50 preterm newborn babies were recruited in this study and were evaluated. The sample size was calculated according to the findings of previous studies considering the significance level of 0.05 and the standard deviation of 1.9.

The consumption of fish and other variables in pregnant women was assessed using a checklist.

This checklist which included necessary variables such as maternal age, location, job, amalgam use, consumption of fish and use of blood products during pregnancy was completed for each patient. We examined pregnant women who consumed fish at least once a week. Women who consumed less than this amount of fish were excluded.

A sample of the infant’s cord blood was taken after the birth and sent to laboratory for measurement of mercury levels. Mercury levels were determined using atomic absorption spectrometry.

Data were entered into SPSS V.16 and analyzed. Mean, standard deviation (SD) and frequency was used as descriptive analysis. For evaluation the distribution of data, one-sample Kolmogorov-Smirnov test was used. Qualitative data were compared with chi-square test. Student t-test was used to compare quantitative variables.

It should be noted that all the provisions of the Helsinki Declaration on research projects have been respected in this study. Comparison of mercury level between term and preterm infants

From all studied mothers, 1 (2%) in preterm group used blood products due to addiction. There was not any significant difference between level of mercury and usage of amalgam or blood products in term and preterm infants (P value > 0.05).

In comparison to mentioned studies, mean level of mercury in our study was higher than previous reports, although this mean is not higher than reference levels recommended by the Environmental Protection Agency (EPA) which is 5.8 µg/L or 29 nmol/L (21-23). Of course there are some studies with higher levels of mercury compared to the present study (24, 25).

In a cohort study which was done by Chen et al. (26) in 2014, it was reported that mercury levels in preterm or low birth weight infants were significantly higher than term infants.

Mean of fish consumption in preterm infants was more than term in the present study, although this was not statistically significant. This study was conducted in Tehran which is an area away from the sea and consumption of seafood in studied mothers, is generally low. Garcia-Esquinas et al. (27) in 2013 reported that mercury concentration was 25% higher in infants of mothers who ate more fish. Wu et al. (20) also showed in their study that mercury concentration is associated with diet of pregnant women, especially fish, shellfish, milk and fruit.

One of our limitations was small sample size. Also studied population was evaluated in Akbarabadi Hospital. Since this hospital is located in the south of Tehran and the majority of patients had low socioeconomic level, our sample is not representative of the normal population. Due to low sample size and effective factors such as being away from the sea and similar location of mothers (mostly in Tehran), evaluation of factors affecting the level of mercury, such as fish or location, was not exactly possible, therefore further studies with a larger population in a wider geographic area is suggested for more precise results.

Copyright © 2020, Journal of Comprehensive Pediatrics. This is an open-access article distributed under the terms of the Creative Commons Attribution-NonCommercial 4.0 International License (http://creativecommons.org/licenses/by-nc/4.0/) which permits copy and redistribute the material just in noncommercial usages, provided the original work is properly cited.
download pdf 142.27 KB Peer Review Comments ( 175.94 KB) Get Permission (article level) Import into EndNote Import into BibTex
Number of Comments: 0