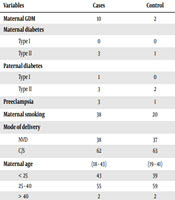 Perinatal risk factors may contribute to the development of childhood type 1 diabetes.

This study aimed to evaluate the possible correlation between some perinatal risk factors and the development of diabetes in children.

A case-control study was designed in a Children’s Medical Center. We enrolled 100 children aged 2 - 15 years with the diagnosis of type 1 diabetes and the equal number of age and sex-matched healthy children. We used a questionnaire to collect data regarding some perinatal risk factors such as gestational diabetes mellitus, parental history of diabetes, parental age, preeclampsia, parental smoking, mode of delivery, gender, birth weight, gestational age, order of birth, type of feeding in neonates, and history of prior admission in hospitals during the neonatal period.

Children who were exposed to maternal gestational diabetes and preeclampsia were at the increased risk of developing type 1 diabetes with odds ratios of 3.789 and 3.150, respectively. Children with a birth weight of above 4 kg had an increased risk of childhood diabetes with an odds ratio of 4.25. There was no significant association between the other risk factors and the development of childhood diabetes.

Avoidance of predisposing factors, appropriate prenatal care, educational programs for improving awareness and knowledge in parents are simple, effective preventive strategies to reduce the risk of type 1 diabetes in children.

Type 1 diabetes is an autoimmune disease resulting in the destruction of beta cells in the pancreatic islets secreting insulin (1, 2). The incidence of type 1 diabetes is rapidly increasing worldwide. This cannot only be explained by genetic factors but environmental factors might have roles in the pathogenesis of childhood diabetes. Exposure to environmental factors in-utero or in early life could initiate or accelerate the autoimmune destruction of beta cells in genetically susceptible subjects (3).

The influence of environmental factors may vary from population to population. More specifically, disease incidence may differ from one geographical area to another because of different exposures to a given risk factor or because of the difference in population genetic susceptibility to that risk factor (4).

Much research has focused on certain perinatal factors as the risk factors for the development of childhood diabetes, but conflicting results exist in this regard. To the best of our knowledge, there are limited studies that have analyzed the correlation between gestational and neonatal events and the development of childhood type 1 diabetes in Iran.

This study aimed to evaluate the possible link between some perinatal risk factors and the development of type I diabetes.

A population-based case-control study was designed among diabetic children and nondiabetic subjects in a Children’s Medical Center, a referral hospital for endocrine disorders in children. Children with type 1 diabetes who were younger than 15-years-old and attended the Pediatric Outpatient Endocrine Clinic or admitted to the pediatric endocrine ward constituted the patient group. The control group matched for age and sex was randomly selected from healthy subjects attending the outpatient clinic for routine checkups or vaccination. Informed consent was obtained from all patients or their parents and the study was approved by the Ethics Committee of Tehran University of Medical Sciences.

We enrolled 100 diabetic and 100 healthy children in this study. Patient and control subjects were similar in both age and sex. There were 54 males and 46 females with a mean age of 7.9 years (SD 3.7 years).

Regarding the potential risk factors during pregnancy, the prevalence of gestational diabetes mellitus (GDM) was significantly different between the two groups. There were 10 mothers with GDM in the case group and two mothers with GDM in the control group. Children with the diagnosis of type 1 diabetes were more likely to have been exposed to maternal gestation diabetes (OR = 3.789, P value = 0.05). None of the mothers in either group had type 1 diabetes, but three mothers in the patient group and one in the control group reported a history of type 2 diabetes, which showed no statistically significant difference (P value > 0.05). There was no association between type I diabetes and paternal diabetes (P value = 0.60, OR = 1.005).

In our study, the history of maternal preeclampsia was associated with an increased incidence of type I diabetes. On the other hand, the offspring of preeclamptic mothers were more susceptible to developing type 1 diabetes than those in the control group (OR = 3.150, P value < 0.05).

The number of parents with smoking habits was higher in the case group (38%) than in the control group (28%), but the difference was not significant (P value > 0.05). There was no statistical difference regarding the mode of delivery between the two groups.

Gestational age and birth order were similar between the two groups. Birth weight above 4 kg was associated with a higher incidence of type I diabetes (OR = 4.25, P value = 0.041). The type of feeding was similar in both groups. The frequency of breastfeeding, formula feeding, and mixed was 65, 20, and 15 versus 72, 18, and 10 in the patient and control groups, respectively. The difference between the groups was not significant (P value = 0.4).

In our study, we did not find any increase in the development of childhood diabetes with a prior history of admission for respiratory diseases and sepsis in the neonatal period.

Table 1. Comparison of Potential Perinatal Risk Factors Between Children With Diabetes and the Control Group

In this study, we evaluated the influence of exposure to certain risk factors during pregnancy and early life on the development of type 1 diabetes in children younger than 15-years-old.

Our study showed a significant association between maternal GDM during pregnancy and type I diabetes in their offspring (OR = 3.789, P value = 0.05). It is consistent with the findings by Haynes et al. (5), Stene et al. (6), Majeed et al. (4), and Abdelmoez Ali et al. (7) that reported the higher prevalence of GDM in the case groups than in controls. Another study from Taiwan reported a great rate of GDM in the mothers of patients than in control mothers (8). It seems that prenatal exposure to gestational diabetes and hyperglycemia could have effects on the postnatal glucose metabolism in offspring.

Despite an expected association between parental diabetes and developing the disease in children, we found no significant difference in the positive history of diabetes between patients and controls. Roche et al. (9) described an abrupt onset of type 1 diabetes and the lack of family history. Similar studies indicate that most children with the disease do not have a sibling or a parent with diabetes (10).

Preeclampsia was significantly associated with type 1 diabetes in the present study. The result of our study is supported by other research (4-7, 11). Algert et al. (3) reported preeclampsia as a risk factor for childhood diabetes, but only among children diagnosed before three-years-old. The results from 16 studies including 8,315 children with childhood diabetes demonstrated that there was little evidence of an increased risk of diabetes in children of preeclamptic mothers. Though the mechanism is not clear, the fetal immune system may be affected by pregnancy complications.

Moreover, Lee et al. (8) did not support a significant increase in the risk of type 1 diabetes in relation to maternal preeclampsia in their study (8). Another study from Sweden did not confirm the association between preeclampsia or eclampsia in the mother and type 1 diabetes in the offspring (12). One hypothesis for this different finding may be due to the newer and more active treatments during pregnancy that could have eradicated a possible effect of preeclampsia on the fetal immune system.

Although we did not find any correlation between smoking habits in mothers and childhood type 1 diabetes, which was in accordance with Ievins et al.’s (13) study, some studies revealed a reduced risk of childhood diabetes with maternal smoking with odds ratios of 0.67 and 0.7 (14, 15). A reduced risk between maternal smoking during pregnancy and the risk of immune-mediated diseases in later life may be considered.

In the current study, children with a birth weight of more than 4,000 g had an increased risk of diabetes (OR = 4.25) compared to children with normal and low weight at birth.

Higher birth weight is associated with an increased risk of mortality during the first year of life and with the development of health problems during infancy, childhood, and even adulthood (16). High intrauterine and rapid postnatal growth are associated with a hyperinsulinemic state, which may trigger the autoimmune process of islet cells’ destruction, leading to type 1 diabetes (5).

Regarding feeding habits, we did not find any difference between the two groups. The protective role of breastfeeding was reported by some studies (7, 21, 22), whereas others did not find any correlation (12, 13), even some others revealed a negative effect (23).

Our results did not support the protective effect of breastfeeding on diabetes. Our work and most of the studies were performed retrospectively, so the recall bias should be considered. The effect of nutrition in the development of type 1 diabetes deserves further studies.

According to the results of the present study, some perinatal risk factors such as gestational diabetes, preeclampsia, and higher birth weight were associated with an increased risk of childhood type 1 diabetes. Identification and avoiding exposure to the risk factors, provision of prenatal care, improving knowledge and awareness in parents about predisposing factors, certain educational programs, and optimum follow-up to evaluate the efficacy of interventions are simple, effective preventive strategies.