Epidemiological and Clinical Features of Acute Poisoning in Children in a Referral Teaching Hospital in Iran, 2015 - 2018 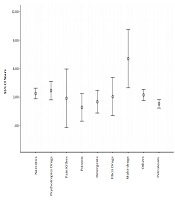 Poisoning is one of the most common medical emergencies in young children. Substantial differences in socioeconomic and cultural situations cause various epidemiological patterns of acute poisoning with different poisonous agents.

We aimed to determine the extent of pediatric poisoning in a referral teaching hospital in the center of Iran.

The electronic database of Qods Children Hospital in Qazvin, Iran, was searched for children younger than 12 years old and referred for acute poisoning from 2015 to 2018. The cases (n = 184) were classified according to their age, gender, symptoms at the time of admission, the toxins, and their types.

The frequency of poisoning in boys was more than girls (M/F = 1.49). The mean age of the patients was 3.4 years, and the average length of stay in hospital was 1.3 days. Children poisoned with petroleum products had the highest average stay (3.10 days). Although more than 65 agents were identified as the poisoning agents, narcotics were the most common category (n = 62, 33.7%), and methadone was the most common agent in our study (n = 46, 25%). Central nervous system symptoms were recorded more than other signs and symptoms on admission or during the stay. Only two patients (1.1%) had been discharged with complications.

With predominance for boys, most of the children had toxicity with medications. Methadone, other narcotics, and psychotropic medications were the most common agents that indicate a need for more severe control and education for prevention from poisoning in children.

Poisoning is one of the most common medical emergencies in young children (1). In a report by the American Association of Poison Control centers (AAPCC), more than 50% of poisoning cases occur in children smaller than six years old. Almost all cases are unintentional and may reflect the propensity of young children to put almost everything in their mouth (2). At-risk children are mostly between one and four years old, male, rather hyperactive, and have increased finger-mouth activity and/or pica. Poisoning is less common in children 6 - 12 years old, and only 6% of all reported pediatric exposures have been reported in this age range. Adolescents are the next vulnerable group, with mainly intentional poisoning and often resulting in more severe toxicity (2).

Acute poisoning is an injury, in which the toxic effect occurs almost immediately, usually within hours (3). Morbidity and mortality of poisoning are going to become a major public health issue in many countries (4). It is estimated that some poisons are responsible for more than one million annual sicknesses worldwide (5).

A recent report by the AAPCC’s National Poison Data System (NPDS) showed that cases with serious outcomes have increased by 4.6 % from 2000 to 2012 (8). Up to 6.4% of children with acute poisoning who visit the emergency departments are hospitalized (9).

Different agents cause pediatric poisoning. According to the research in Mashhad (northeast) and Arak (center of Iran), narcotics (opium and methadone) and benzodiazepines were the most common agents, respectively (10, 11). More reports from different provinces also reveal the characteristics of pediatric poisoning; however, many of them are outdated (12-15).

To understand the characteristics and extent of pediatric poisoning as well as the possible ways for prevention, local studies should be performed in different countries and local areas (13).

This study aimed at determining the magnitude of pediatric poisoning in a referral teaching hospital in the center of Iran, as well as its epidemiological and clinical characteristics.

The study protocol was approved by the Ethics Committee of the Qazvin University of Medical Sciences. The childhood poisoning was classified according to the age and gender of the cases, symptoms at the time of admission, substances, and toxins involved in the poisoning and their type, length of stay in the hospital, and outcomes.

All admitted patients due to accidental poisoning between 2015 and 2018 (n = 184) were enrolled. The patients’ symptoms and conditions on admission were also recorded.

The condition at the time of discharge was described as well, satisfactory, or with complications.

Statistical analyses (descriptive, univariate analysis of variance with the Tukey posthoc test, and logistic regression) were performed using SPSS version 16. The level of significance for all comparisons was considered as 0.05.

Several substances were identified as poisoning agents (n = 66). Among all patients, medications (i.e., prescribed and over-the-counters [OTCs]) were responsible for 135 cases (73.4%). Methadone was the most common agent (n = 46, 25%), followed by petroleum (n = 9, 4.9%), opium, clonazepam, and bleach liquid (n = 8 each, 4.3%). Ant killer and rats bane were categorized as “poisons” and affected eight patients (4.3%). Table 1 represents the poison categories with the highest frequency.

Table 1. The Poison Categories with the Highest Frequency and the Most Common Clinical Manifestations in the Poisoned Childrena

Children who poisoned by multiple agents were older than others (7.06 ± 3.97; CI 95%: 4.00 to 10.11), and the difference between the categories was statistically significant (P < 0.001). The post-hoc analysis showed that multi-drug patients were significantly older than all other categories except for illicit drugs. Figure 1 shows the age of patients in different categories. 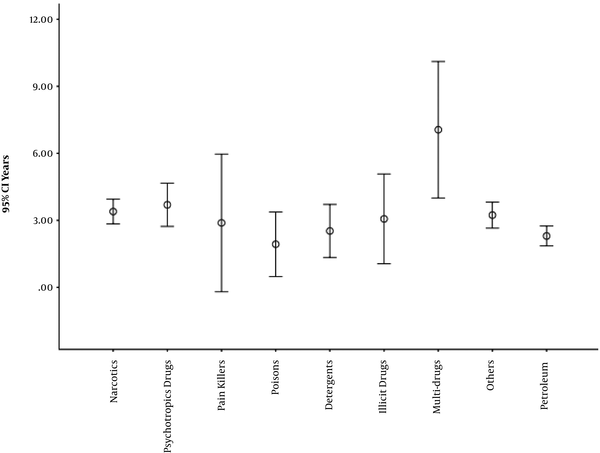 Figure 1. Comparison of the age of the patients poisoned with different agents

Different symptoms and signs were reported, mostly related to the central nervous system (CNS), including lack of consciousness (77.7%). Complaints, such as nausea, vomiting, and pupil change were other common signs and symptoms (Table 1).

We entered cases in logistic regression analysis except for two cases with complications. The length of stay was the only related factor with a good outcome (odds ratio = 2.36 [95% CI: 1.493 - 3.731]).

Acute poisoning is an important cause of admission to the pediatric emergency departments. Epidemiological features of childhood poisoning are important to promote preventive measures and plan treatment facilities.

In this study, the number of boys was more than girls with a male/female ratio of 1.49, which is consistent with some reports (16, 17); however, it was more than some others (18, 19). A prior report from Qazvin (2009 - 2013) showed a higher rate of poisoning in boys (1.73/1) that may indicate the decreased gap between the sexes in recent years (20) because of either excessive rate in girls or decreased rate in boys.

About one-fourth of all cases were discharged on the day of admission and about three-fourth in the next day that is compatible with some other reports (21) but longer than another report from Qazvin, in which the average hospital stay was 25 hours and more than 82% of the cases were discharged in the first 48 h. This difference could be attributed to changes in both type and amount of the agents of poisoning in the region.

Our patients had a mean age of about 41 months. Although the previous study from Qazvin, reported the average age of 41 months (that is almost similar to our results), in a study in Turkey on poisoning in children (including adolescents), the mean age was 6.7 years old that is higher than ours (22). It shows that the age of the poisoned children has not been changed during the last decade at the local level, but there are differences between different countries, even the neighbors. A potential cause may be the difference between the two populations in the studies. We studied children younger than 12 years old, whereas Ozdemir et al. (22) studied those younger than 19 years old. Since there are differences between poisoning in children and adolescents, especially due to variations in type and amount of the agents, assessment of the two age groups in the same study might not be easily interpreted. Another probable cause can be related to different access to the drugs and poisons in the countries.

While prescribed medications and OTCs were responsible for about three-fourth of poisonings, narcotics and psychotropic medications were the two main groups. A previous study in the same region revealed that medications had a share of less than two-thirds of all cases (20). This increasing rate might be related to the availability of drugs due to less attention from parents. Different studies have reported psychotropic medications, including benzodiazepines, as the most common drugs in childhood poisoning (17, 22). Hoikka et al. (23) reported benzodiazepines (12%) and terbutaline (12.3%) as the most dominant causes among drugs. Instead, non-pharmacological agents were the dominant cause of poisoning in some other studies (24). The differences between studies in various countries can be related to the regulations on access to drugs and poisons. For example, the popularity of the methadone maintenance treatment centers in Iran in recent years resulted in easy access to methadone. Unsafe storage of methadone at home (especially the liquid form) is an important reason for poisoning with the drug (25). Also, another report from Iran mentioned that methadone poisoning is increasing due to the higher doses of the drug in syrups (26). Prescribed drugs are supposed to be accessible only through physicians’ prescriptions and hard to access by children, but in developing countries (including Iran), they could sometimes be provided without a physicians’ prescription. The high rate of poisoning with psychotropic medications also can be a result of easy access to these prescribed drugs through pharmacies and/or unsafe storage at home (22).

Neurological and gastrointestinal manifestations were the most common clinical problems of our cases. This is not surprising because the narcotics and psychotropic medications were the most usual poisoning agents. Since various agents are involved in different studies, they show different patterns of clinical manifestations. For example, in a study from Pakistan that reported a different pattern of the agents (79.7% of the cases ingested non–pharmacological agents, mostly pesticides), there were different clinical manifestations, including local burns, bleeding/bruising, tissue swelling and anaphylaxis, cardiovascular, CNS, respiratory, and gastrointestinal symptoms (24). Another report from Pakistan that reported a rate of less than 12% for medications and 65% for organophosphorus, rodenticide, and hydrocarbons, also revealed the respiratory and gastrointestinal complications as the most common manifestations (18), which are compatible with the type of the agents.

The clinical outcome of the patients was satisfying because more than 65% of them were discharged with good condition, and only 1.1% suffered from complications. This is a different and better result than other reports. The previous study from Qazvin reported three deaths out of 434 poisoning cases (20), and a report from Pakistan showed a 79% discharge rate without sequelae and a death rate of 11% (21). A potential reason for various results between the countries might be the difference between the structure of the societies and the type of poisoning agents. The difference between patients’ outcomes in the same city can be due to a lower amount of the potent or toxic agents and/or better care provided in the hospital, such as developing intensive care facilities. Also, we found a relationship between good condition and the length of stay in the hospital. The shortest stay was accompanied by a satisfactory condition that could be contributed to the severity of the patients’ situation. The less severe condition had a shorter hospital stay and a better outcome. The chance of being in good condition at discharge time (compared with the satisfying condition) is reduced with every additional day of hospitalization by 2.36 times.

With predominance for boys, most of the children had toxicity with medications (either prescribed or OTC) rather than agricultural or household poisons. Methadone and other narcotics and psychotropic drugs were the most common agents that indicate a need for more severe control as well as knowledge regarding public education for poisoning prevention in children. Clinical manifestations of the patients were compatible with the agents, and the overall outcome of the patients was satisfactory because there was no death, and only two cases had complications for 4 years. The most important preventive advice is the safe storage of the medications at home.

Our research was a retrospective study on the hospital-based data that might be accompanied by low precision. Also, Qods Hospital admits the patients younger than 12 years old, which makes the comparison between studies hard.

We would like to thank all the archive personnel of Qods Hospital for their cooperation.