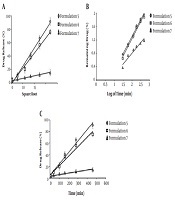 Preparation and Evaluation of Physicochemical Properties of the Doxepin Mucoadhesive Gel

Oral mucositis is a common debilitating complication of cancer chemotherapy and radiotherapy that can reduce the quality of patient’s lives. Hence, treating this condition plays an important role in increasing the patient’s tolerance.

Doxepin gel’s formulation was prepared with various concentrations of poloxamer 407 and hydroxypropyl methylcellulose in deionized water. The prepared gels were evaluated for pH, appearance, viscosity, spreadability, stability, and drug release.

Suitable physicochemical properties of prepared doxepin mucoadhesive gel enable it to well cover inflamed and damaged oral mucosa. On the other hand, doxepin’s slow release from formulation (8 hours) can increase therapeutic effects and reduce side effects, which can heal and soothe inflammations of the oral mucosa and be useful in cancer patient’s treatment.

Chemotherapy is an important part of treating several cancers. However, it may cause complications such as damage to the mucosa of the mouth, which occurs in more 40% of the patients (1, 2). In addition to reduced nutrition intake and poor oral hygiene, these painful lesions increase the risk of topical and systemic infection, which in turn negatively affect the chemotherapy process (3). Hence, relieving the pain of these oral lesions would be a great help for reducing the side effects of chemotherapy and patient tolerance. The use of topical formulations of lidocaine, Benzocaine, and diphenhydramine relieve side effects of chemotherapy, both temporarily and in the long-term.

Due to immunosuppressive characteristics, caution should be taken when prescribing steroidal anti-inflammatory drugs. The effectiveness of other drugs has not yet been proven (4). Therefore, there is an urgent need for a special formulation with higher efficacy and lower side effects to manage inflammation of the oral mucosa. Doxepin is a tricyclic antidepressant with central and peripheral effects. The central activity of doxepin is inhibiting the reuptake of norepinephrine and serotonin at nerve terminals, and its peripheral activity is related to adenosine receptors. Moreover, it is a strong inhibitor of histamine receptors H1 and H2 (5).

Doxepin mucoadhesive gel can be used for treating inflammation of oral mucosa due to long-term side effects of chemotherapy, with low adverse effects.

At first, different formulations with concentrations of Poloxamer 407 and Hydroxypropyl methylcellulose were prepared in deionized water, then the formulations were inspected visually and physically properties (Table 1).

The poloxamer gels were prepared using the cold preparation technique (8). Different concentrations of poloxamer 407 were dispersed in 30 ml of deionized water and constantly stirred to obtain a clear solution. Afterward, the obtained gel was stored in a refrigerator at 4°C for 24 h to ensure complete dissolution. Then, accurately weighted doxepin was dissolved in 60 ml of deionized water, and hydroxyl propyl methylcellulose (HPMC) was added. Both of the above solutions were mixed at 40°C - 45°C with continuous stirring for 10 hours until the uniform gel was formed and stored in a glass container at room temperature. Finally, doxepin content, bioadhesives, viscosity, and drug release from the mucus membrane were evaluated (9, 10).

The gels were examined for their physical properties by visual inspection of color, clarity, homogeneity, and phase separation (11, 12).

The thumb test was carried out by placing a little of mucoadhesive gel between the thumb and the middle finger and kept for some time. The quality of adhesiveness was measured by how difficult it would be to separate fingers (13).

The pH values of the prepared gels were checked by using a pH meter, which was calibrated before each use with standard buffer solutions at pH = 4, 7, and 9 (12).

Occlusivity is one of the most important properties of mucoadhesives. In order to evaluate occlusivity, a 10% gelatin solution was prepared and spread to a container with 1 cm height. Then, the plastic cylinders (inner diameter 3 cm) were placed inside the container to form a gelatin layer inside them, then cylinders were removed, and 2 mL distilled water was poured in the opposite side of the cylinders. The cylinders were closed and weighed. The cells were put in a desiccator in 25 ± 1, and changes in weight of the cylinder were studied overtime again in the same test that 300 mg/cm2 of doxepin mucoadhesive gel was spread on the gelatin layer, and the water evaporation speed was measured through studying changes in weight of cells. In this test, the gelatin layer creates a similar skin condition. By comparing the water evaporation kinetic in the two states mentioned above, the occlusivity was calculated using the following equation:

The spreadability of the gel formulations of 5, 6, and 7 was determined by pressing 0.5 g of each prepared formula (at room temperature) between two glass slides for about 3 minutes and measuring the diameter of the formed circle. Then, a 250 g weight was placed on the center of a glass plate, and after 3 minutes’ expansion of the gel was calculated. This action was repeated with a 500 g weight. All measurements were carried out in triplicate, and the results were compared with the standard (16).

The adhesion strength was determined by the tensiometer tool (Tensiometer kruss k100. Germany), and the mucoadhesive gels were tested for adhesiveness properties using a modified method developed by Yong et al. (17).

3.3.9. In Vitro Release and Diffusion Studies

To investigate in vitro release and diffusion studies of prepared gels, Franz diffusion cells were used. These cells consist of donor and receptor chambers and between two chambers a piece of Guinea pig oral mucosal tissue was positioned. The area of diffusion was 3 - 4 cm2. The doxepin mucoadhesive gels were spread onto the membrane, then the plastic layer (to prevent drying gel) was placed on it. In the receptor chamber, a specified volume of phosphate buffer was used. In order to remove the diffusion layers and dispersion of the drug, phosphate buffer with a magnetic stirring bar was continuously stirred (rpm 600) at 37 ± 1 degrees Celsius. Aliquots of 5 mL of the phosphate buffer were withdrawn at 0.5, 1, 2, 3, 4, 5, 6, 7, and 8 h and were replaced with an equal volume of fresh medium to maintain a constant volume. The concentration of doxepin was determined by UV spectroscopy at the λ max of 297 nm. The amount of doxepin released at various intervals of time was calculated and plotted versus time. All the experiments were run in triplicate, and the results were expressed as mean values ± S.D (18).

The stability of doxepin mucoadhesive gel under triple different conditions, as mentioned below, was investigated. Doxepin mucoadhesive gel formulations were maintained in sealed and turbid glass containers over a period of three months at room temperature (25 ± 1°C). Then, at specified intervals (two weeks, one month, and three months), appearance, physical properties by visual inspection and thumb test were qualitatively evaluated, and viscosity, the active ingredient, mocoadhesiveness, and pH were quantitatively evaluated.

The formulations were maintained at -10°C for four weeks, and the adhesion, uniformity, and touchablility of particles were evaluated by the finger test. Then, the results were compared with prototypes.

The formulation was centrifuged at 5000 rpm in four and forty-degree Celsius for one minute. The crystalline growth, leakage, shrinking, bleeding, and gritting was investigated by microscope. Then, the results were compared with the prototype.

Table 2. Results of Visual and Physical Evaluation Which Led to Selected Formulation Number 6a

The results of the occlusivity test are shown in Figure 1. 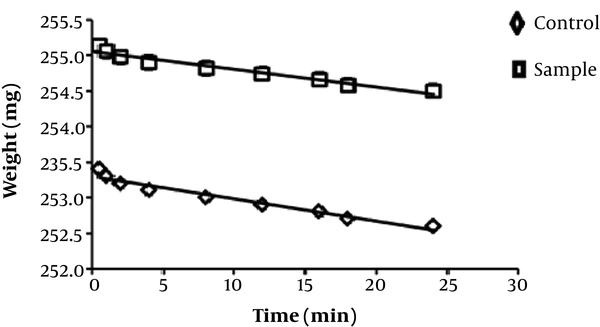 The weight of the control cells against time (temperature 25°C). (Each of the values is measured three times.) 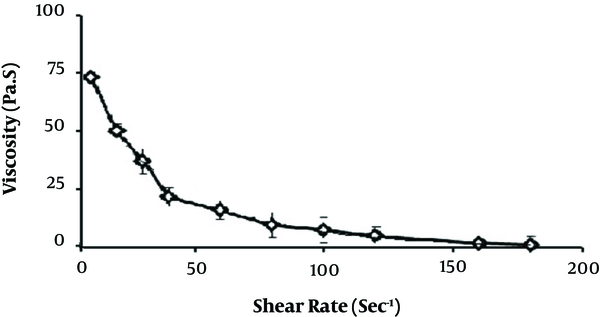 Viscosity formulation 6 versus increase shear rates (temperature 25°C). (Each of the values is measured three times.)

The maximum mucoadhesiveness force of formulation 6 at special times was determined via measuring the surface tension by a tensiometer device. 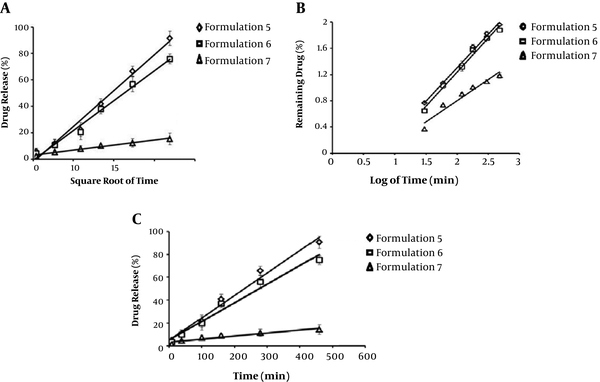 The order of release kinetic models of formulations 5, 6, and 7: A, Higuchi’s kinetic model; B, Korsmeyer-Peppas model; and C, the zero-order kinetics model

The doxepin mucoadhessive gel was stored in a dark and sealed glass container for three months at room temperature (25 ± 1°C) and stored at specified intervals (2 weeks, 1 month, and 3 months) in terms of visual and physical properties. The finger test was quantitatively evaluated. Viscosity, amount of active ingredient, adhesive mucosa, and pH qualitatively were determined.

Appearance and physical properties, viscosity, uniformity, and adhesiveness at preparation time and 2 weeks, 1 month, and 2 months after gel preparations were almost constant, and there was no difference with the primary formulation. Formulation 6 was observed under a light microscope (magnification 100 times) when preparing and after one-month keeping at room temperature, which the formulation was uniformed.

One of the major consequences of chemotherapy and radiotherapy is inflammation of oral mucosa, which has a significant effect on the quality of life of cancer patients. Hence, treating or preventing this problem is of crucial importance for cancer patients. Dhiman et al. (19) investigated the fluorouracil release of mucoadhesive formulations with different concentrations of poloxamer 407, HPMC, and the mechanism of the fluorouracil release that follows Fick’s law. In another similar study, Abdel-Mottaleb et al. (20) investigated the fluconazole release of mucoadhesive formulations with different concentrations of poloxamer 407, HPMC, and chitosan. They reported that the mechanism of drug release follows zero kinetics. In this study, the amount of drug released within 6 hours from the formulation with 20% poloxamer and 4% chitosan were 33% and 40%, respectively (20). Another study by Perioli et al. (21) reported that metronidazole mucoadhesive gel with different concentrations (group I: 4% hydroxyethyl cellulose (HEC) with 5/0, 1, and 2% chitosan and group II: 4% hydroxyethylcellulose with 5/0, 1 and 2% of 5-methyl Pyrrolidinone chitosan) was developed for the treatment of bacterial vaginosis. In this study, the rate of drug release is obtained for 12 hours by Franz cells and cell membrane between 70% to 86% (21). In a study by Rossi et al. (22), benzydamine mucoadhesive gel hydrochloride was produced for the treatment of inflammation of the mucous from trimethyl chitosan and glycerol phosphate at a ratio of 1 to 2 for gel mucoadhesiveto treat inflammation of the mucous. They reported after 6 hours, about 70% of the drug was released (22). According to the results, the release of doxepin from formulation 6 follows zero gradation, and the rheology study of formulation showed the plastic behavior of doxepin mucoadhesive gel. Another study by Baloglu et al. (23) reported that formulation viscosity was positively associated with temperature and concentration of mucoadhesive polymers. The difference in viscosity depends on various factors, including physicochemical properties of the polymer, the concentration of polymer and drug, also the type of viscometer. As the concentration of polymers increases, more intermolecular bonds are formed in the polymer chains, which increases the viscosity of the formulation. Chemotherapy and radiotherapy also cause dry mouth (Xerostomia) (24). According to the literature, the application of mucoadhesive gel doxepin (19%) may be beneficial to retain mucosa moisture. According to this study, it is expected that the mucoadhesive gel creates a protective barrier against external factors by covering the inflamed oral mucosa. On the other hand, by increasing the stay of the drug at the site of inflammation and releasing slowly doxepin creates a suitable anti-inflammatory effect and accelerates the healing of mucosal lesions.

Aksungur et al. (25) have used mucoadhesive polymer chitosan, as a protective covering against the candidate lesion. When separated as mucoadhesive tablets, they found no damage to the mouth tissue by removing the mucous lining. The results of surface tension detectors (Krüss K100), and power of mucoadhesive formulation 6 via containing doxepin or lack of doxepin in the oral mucosa of pigs Hindi were 2.99 ± 0.09 dyne/cm and 5.04 ± 0.03 dyne/cm, respectively, which do not indicate the impact of doxepin on the viscosity formulation. The amount of adhesion formulation 6 of doxepin was more desirable, compared to the simple skin gel (2.01 dyne/cm2). Another study by Dhiman et al. (19) showed that the satisfying pH of different formulations was in the range of 5.5 to 7.2, and they did not stimuli on the oral mucosa.

Changes of mucoadhesive gel formulation 6 doxepin, from the time of production until the end of the third month, was very low; also, the pH stayed in the range within the oral environment.

We are thankful to Kerman University of Medical Sciences.