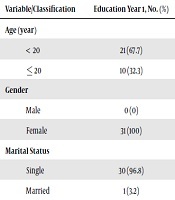 The findings on changes in the level of nursing students’ empathy during the university education are contradictory, and it’s not clear whether it decreases/increases after four years of education.

The current study aimed to investigate the level of nursing students’ empathy during different years of education.

In this descriptive study, 122 undergraduate nursing students from the first to the fourth year of the program are included. Data were collected using the Jefferson Scale of Empathy Nursing Student Version-R and analyzed by the descriptive and analytical tests in SPSS version 21.

The mean score of empathy was 91.8±28.7. The level of empathy significantly declines in the fourth year of education, compared to the first year (P < 0.001).

This study showed that the level of empathy of nursing students significantly declines in the fourth year, so exploring its causes would be useful. Also, empathy should be introduced to the nursing students as one of the standards of clinical competency using strategies such as education for empathic communication with the patient in nursing training programs.

Communication is a crucial component of the relations between health care providers, including nursing students, and patients that affects patients’ and families’ hope (1). Hence, communication can be considered as an important aspect of nursing care, so that establishing an effective relationship with patients through addressing their concerns, understanding, empathy, and providing comfort and support, is as important as having information about illness and treatment (2). Empathy is a communication skill that uses to control, sharpen, support, understand, rebuild, and reflect the perception of the patient’s thoughts and feelings. Long-term trust and communication are the prerequisites of establishing empathy (3). Having empathy communication skills is necessary for nursing students, as their skills directly affect the patient’s satisfaction and influence their health outcomes (4). Empathy is an important ability to fit the person with the feelings and thoughts of others, link the person with the social world, helping others, and to prevent harm to others. Empathy also stimulates social behaviors that increase the cohesion of teams (5). Cognitive empathy means being aware of sensation and awareness of others’ feelings, while the purpose of emotional empathy is to properly perceive the thoughts and feelings of others and showing a suitable response to them (6).

A review study reported contradictory results about changes in the level of nursing students’ empathy (7, 8) and other students in the healthcare field during academic years of education (9, 10). Nevertheless, several studies indicated that as the years of education increase, the level of empathy declines (7, 9, 10). Since only one study was found on this topic in Iran (11) (after an extensive search of internal and international databases), the authors decided to design new research in this area.

The current study aimed to investigate the level of empathy and its changes in undergraduate nursing students from the first year to the fourth year.

Before filling out the Jefferson empathy scale, students were asked to complete a demographic form, including age, gender, marital status, and the education year.

This scale is based on the Jefferson Physician Empathy Scale that consists of 20 items with a 7-point Likert scale. Each item is assigned a score ranging from 1 (strongly disagree) to 7 (strongly agree). JSE-NS version R has three factors; “perspective taking” (10 items), “compassionate care” (8 items), and “standing in patient’s shoes” (2 items). To calculate the total score, 10 items must be reversed (1, 3, 6-8, 11-15). The validity and reliability of the Persian version of the JSE- NS version R are confirmed in a previous study (12).

However, in the psychometrics study of the Persian version of this scale, four factors were identified, i.e., “perspective taking”, “compassionate care”, “standing in patient’s shoes”, and “metacognitive” (12). The total score ranges from 20 to 140. The higher the score, the higher the empathy. The reliability of the English version of the scale was confirmed using the internal consistency and calculating the Cronbach’s alpha coefficient in a sample of American nursing students (α = 0.77) (16). In the present study, the reliability of the JSE-NS version R is assessed in a sample of 122 nursing students using Cronbach’s alpha coefficient (α = 0.93).

The Kolmogorov-Smirnov test was used to assess the normality of the distribution of data. The result showed a normal distribution (P > 0.05). Descriptive statistics and independent t-test, Analysis of Variance (ANOVA), and Tukey Post Hoc test were used to analyze the data.

Table 3. Distribution of Nursing Students’ Empathy Score According to the Jefferson Scale Based on Percentiles

Based on the independent t-test, students who were aged 20 years (or more), single, and female had higher levels of empathy than those younger than 20 years, male, and married. The results of ANOVA showed that students’ empathy was higher in the first year of education than in other years. The Tukey Post Hoc test showed that the empathy of the second-year students was less than the first year, and the lowest level of students’ empathy was found in the students of the fourth year of education (Table 4).

Table 4. Classification of Demographic Characteristics According to the Empathy Score by the Jefferson Scale in Nursing Students (N = 122)

This study showed that the empathy of the third year nursing students is higher than the second-year students. However, the results of a study on pharmacology students in Malaysia found that third and fourth-year students had lower empathy compared to the first and second-year students (19). But, the empathy of the third-year students of pharmacology in the UK was significantly higher than that of the first-year students (18). Another study in India showed that the level of empathy is inversely associated with the years of education (14). Two studies conducted on medical students in The US and Shiraz University of Medical Sciences (Iran) reported that the higher the education year, the lower the level of empathy (9, 10). Hojat et al. (15) discussed about the following factors which may reduce medical students’ empathy; lack of appropriate role models, negative attitudes toward clinical competencies, long-term presence in the clinical settings, threatening or risky educational environments, heavy educational responsibilities, or clinical duties, and negative reactions of patients to students’ empathy. Rosen et al. reported the following factors; different aspects of stressful practices such as long hours of clinical work and sleep deprivation, dependence on technology for diagnosis, short-term hospitalization of the patients, and limited interactions between students and patients (20).

Investigating demographic characteristics of nursing students and their empathy scores revealed that those who are 20 years old and older, single, and female have higher scores than students younger than 20 years, male, and married. A research conducted in Australia on undergraduate paramedic/nursing students reported that students aged 30 - 36 and 31 - 35 years had higher scores than their younger classmates (21). Higher empathy of older students can be attributed to their higher experiences in life, which in turn increases their empathy (16). Also, the acquisition of experiences such as love, loss, regret, entanglement, pain, and loneliness leads to more attention to the effects of these experiences throughout the life on others (21). A study that used the “Empathic Tendency Scale” to measure the empathy of nursing students has reported that the empathy of those younger than 20 years was lower than those aged 21 - 30 years (8). While (22), found that increased age was not associated with the level of empathy of Brazilian nurses.

A review of gender-focused empathy research has shown that women are generally more empathetic than men (14, 16, 23-26). Another study conducted on medical students in Bangladesh reported that the empathy score of females was higher than males (27), which can be attributed to females abilities to better manage confrontations with life stressors (28). This gender difference can also be attributed to sexual bio-evolutionary characteristics, interpersonal care styles, socialization, and gender role expectations (29). In the present study, single nursing students had higher empathy scores than their married counterparts, but a similar study on oncology nurses conducted in Iran reported higher scores for married nurses (30). However, in another study on oncology nurses in Turkey, marital status was not associated with nurses’ empathy (31). It seems that the low number of married students in our study has resulted in biased results.

This study showed the necessity for teaching clinical empathy in the educational program of nursing students. Although some researchers believe that empathy is an intrinsic characteristic, some studies showed that empathy is associated with increased cognitive dimension through proper education (30, 32, 33). Since students in the fourth year of education had significantly lower scores than those in the first year, the authors recommend focusing on the causes of this decline in future studies. Thus, empathy with patients should be introduced as a standard skill of clinical competence to the nursing students through strategies such as empathic communication training in the nursing courses program. According to the literature, there are other strategies that can be used to enhance the empathy of nursing students, such as practice for creative writing in nursing, attention to the literature and art, the use of appropriate role models in clinical settings, supervision of students’ clinical practice, and encouraging nursing students to use the skill of empathy in dealing with patients (34).

Copyright © 2020, Journal of Medical Education. This is an open-access article distributed under the terms of the Creative Commons Attribution-NonCommercial 4.0 International License (http://creativecommons.org/licenses/by-nc/4.0/) which permits copy and redistribute the material just in noncommercial usages, provided the original work is properly cited.
download pdf 133.34 KB Abstract XML Get Permission (article level) Import into EndNote Import into BibTex
Number of Comments: 0