The Physician-Patient Relationship: How It Is Represented in Iranian National Television 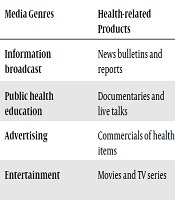 In modern-day medicine, there is plenty of evidence-based communication studies implying that good physician-patient communication provides better diagnosis and treatment, as well as patient satisfaction and compliance with the therapeutic plan. Medical educators who promote better communication to strengthen the physician-patient relationship believe that shared decision-making is the most favorable model after the era of paternalistic and consumeristic models as the dominant types of interpersonal communication between doctors and their patients. On the other hand, different media, especially medical dramas, if properly targeted, can be used as an educational tool for health workers and a cultural factor for the whole society to ameliorate the current difficulties in the physician-patient relationship.

We used a qualitative inquiry to analyze a medical drama about hospital affairs, named The Nurses, which was produced by the Iranian national television with the cooperation and sponsorship of Iran’s Ministry of Health and broadcasted as a two-season television drama in 46 episodes during 2016 - 2017. In this regard, all aspects of physician-patient communication were analyzed based on the thematic deductive content analysis method.

The study reviewed 46 out of 51 episodes. Each sene that represented the physician-patient relationship was analyzed based on a developed checklist. The checklist was prepared based on a literature review, and its content validity was approved by the medical ethics experts.

The findings of this study showed that this medical drama paradoxically represented the paternalistic model of the physician-patient relationship that was inconsistent with the formal views of Iranian authorities.

One of these influencing factors is the media in its various forms, such as social media and TV programs. Therefore, the portrayal of this relationship in televised medical dramas could influence the popular attitude toward this relationship. Due to the impact of the media on society’s attitude, it also may shape the perception of the patients and professionals about the standard model of the relationships (4-6). Parsons believed that the physician-patient relationship is a reciprocal encounter that may lead to the superiority of one of them in the absence of partnership and empathy (7). The outcome of this imbalance would be the unapproved models of the relationship, namely paternalistic and technician models (8-10).

On the other hand, some educators advocate that the media and particularly the medical dramas can play an important role in teaching communication issues to medical students (11). However, it is necessary to first measure the potential utility of these movies before assessing their influences on society and medical students. This means that we should know what is actually being portrayed in the media about the physician-patient relationship. Some authors previously described television portrayals of physicians in medical and non-medical dramas (4, 12-14), but none of them focused on the physician-patient relationship.

Therefore, this study aimed to conduct a systematic analysis of the physician-patient relationship in a medical series named The Nurses (Parastaran) (15), which was produced and showed in the Iranian National TV. We chose the national media with a wide broadcasting area that could well represent the national authorities’ views.

First, we constructed a list of all medical programs broadcasted on the National TV of Iran from 2016 to 2017. Their categorization based on the TV program list is shown in Table 1.

Then, we chose the medical drama medium because of its more influence on society. It is necessary to mention that we selected dramas that were produced in Iran since they better reflect the attitudes and perceptions of Iranian people toward the physician-patient relationship and society norms. Furthermore, among the produced medical dramas, the Nurses (Parastaran) drama was the only one produced based on the recommendations and supervision of the Ministry of Health. Therefore, it seemed that it better represented the ministry’s opinion on the issue.

This TV series included two seasons and 51 episodes. We conducted a content analysis of this series, focusing on the scenes that represented physician-patient encounters in clinical settings. For analyzing the show, we developed a series of codes based on the preferred physician-patient relationship criteria that represented the shared decision-making process (Table 2). The checklist of the codes consisted of two parts. The first one contained the prerequisite elements for a good relationship such as rapport, professional manner, eye contact, greetings, active listening, confirmation, and proper reactions to patient emotions. The second part directly measured the shared decision-making process elements. Finally, we concluded on the type of physician-patient relationship.

Table 2. The Checklist of the Codes Developed for the Assessment of the Physician-Patient Relationship Portrayed in Movies and TV Series

After coding, physician-patient relationship incidents were reviewed to distinct the remarkable properties of each incidence regarding the shared decision-making elements. The unit of analysis was scenes. Every physician-patient clinical encounter was examined in each episode.

For the quality assurance and accuracy of the coding, two of the authors coded and discussed two episodes from the first season. This step showed the consistency of coding between researchers. Then, one author (HR) coded each episode. After the initial round of coding, the authors clarified the codes through further discussions. Any questionable incidents were evaluated by all authors to reach consensus.

Our analysis of the episodes showed that although the series is categorized under the medical drama programs, its main theme was not the medical issues. Among 51 episodes of the series, we could only find 46 ones in the TV archive. In these 46 episodes, there were 28 scenes of clinical encounters between physicians and patients. From these 28 encounters, 24 represented the paternalistic relationship between the physician and the patient, three represented the technician model of the relationship that left the decision on the patient, and only one scene of the physician-patient relationship represented the elements of shared decision-making. The details of the results are shown in Table 3 for the first season and Table 4 for the second season.

Also, the increasing use of complex new technologies for a proper and standard clinical approach in modern medicine has elicited ethical dilemmas about the unknown future consequences of these interventions for patients (3). Therefore, effective communication between physicians and patients may be the sole way of overcoming these dilemmas in modern medical sciences, and shared decision-making is the best model to achieve such a relationship. Formal medical textbooks introduced as national residency exams have been selected and targeted toward promoting shared decision-making as the desired type of physician-patient relationship (20, 21). Iranian medical council has also emphasized better communication of the members in its most recent professional codes of conduct to improve the shared physician-patient relationship (22).

Apart from the internal capacity of the medical profession to change the paternalistic behavior of physicians with their patients, there are social factors that may alleviate this transition of our era to a more democratic relationship that is called shared decision-making. Mass media, including popular television programs, have been considered potentially significant tools that can shape public opinion and social interactions in different backgrounds like the physician-patient relationship in clinical settings (23-26).

Clinical studies in recent years showed that more attractive TV programs like dramas might have unwanted negative impacts on the patients’ or their families’ expectations from the emergency cardiopulmonary resuscitation, a routine clinical visit, and even diagnostic imaging departments causing difficulties in this relationship (5, 6, 12). Some researchers also have focused on TV dramas’ value in improving the medical students’ attitude toward the care of patients (11) or the patients’ better perception of moral distress that is really experienced in medical procedures (14).

However, in addition to these approaches, TV medical dramas may be studied through the lens of professionalism and medical ethics. As some researchers emphasized, the assessment of the influence of televised dramas on students or the general public, it seems necessary to know what is really being portrayed in these programs. Content analysis of two popular medical dramas in the United States showed egregious deviations from the norms of professionalism even though all the episodes were depicting bioethical issues (4).

Representation of traditional paternalistic physician-patient relationship in the first and the only medical drama produced and broadcasted in Iran National TV Channel One with the sponsorship of the Ministry of Health and Medical Education was against the formal policies of this institution (27) in the promotion of shared decision-making in the health system.

This paradoxical outcome in such a modern approach to promote health issues through media, particularly medical dramas, indicated that health communication as a newly introduced discipline should be better studied and understood by academic institutions of developing countries to regulate and optimize artistic and scientific interactions for achieving the best results in a media representation. This not only will influence the social perception of good communication but also will affect the health professionals and mainly the future physicians’ (medical students’) understanding of morally acceptable communication with their patients to preserve the patient’s autonomy with shared decision-making.

This study is part of a Ph.D. Thesis on Medical Ethics, which was approved in the Medical Ethics Department, School of Traditional Medicine, Shahid Beheshti University of Medical Sciences.

Copyright © 2020, Journal of Medical Education. This is an open-access article distributed under the terms of the Creative Commons Attribution-NonCommercial 4.0 International License (http://creativecommons.org/licenses/by-nc/4.0/) which permits copy and redistribute the material just in noncommercial usages, provided the original work is properly cited.
COMMENTS