Considering the pivotal role of telemedicine in providing healthcare services for remote areas, some of the military medical centers, especially in developed countries, use different types of telemedicine programs.

The present study aimed at identifying the implemented telemedicine projects in military medicine worldwide and introducing their features.

The current systematic review was performed in 2018. PubMed, Scopus, Embase, and Web of Science databases were searched for articles published from 2014 to 2018 by a combination of related keywords, and the related original articles were then selected based on the inclusion and exclusion criteria. Data were collected by a data extraction form, and then the data were summarized and reported based on the study objectives.

Of the 173 articles retrieved from the first round of search, 12 were included in the study; five (41.66%) studies had used the synchronous (real-time telemedicine) method. The United States, with nine studies, had the highest number of projects in military telemedicine. Most studies (n = 7) were performed on tele-psychology and the application of telemedicine in psychology. All selected studies reported the positive effects of telemedicine on providing healthcare for military forces.

The proper utilization of telemedicine equipment is effective in saving time for both patients and healthcare providers, reducing costs, supporting in natural disasters, and satisfying patients with military medicine. To achieve telemedicine program objectives, they should be set precisely. Considering the importance of timely healthcare services, it is suggested to utilize synchronous methods and tools such as video conferencing.

Military medicine is an academic discipline with extensive applications and fields. Military physicians generally practice a body of knowledge specific to the medical problems and needs of army forces, which is typically different from that of general medicine (1).

Physicians encounter serious challenges to provide comprehensive healthcare services for armed forces, and telemedicine is employed to resolve some of them. Health information technology, especially telemedicine, is an equipped supportive tool to provide health care for military medicine (2). In a military medical center, telemedicine is extensively used to identify injuries and diseases, support the treatment, rehabilitation, and aid the improvement of injured forces (3). According to the World Health Organization, telemedicine includes providing healthcare services by all specialists through exchanging accurate diagnostic information, preventing and treating diseases and injuries, and continuously evaluating and educating healthcare providers by the employment of information and communication technology (ICT) to enhance the health of the population (4, 5). Telemedicine is defined as the use of health information exchanged through telecommunications to improve clinical care (6). Telemedicine has many types, including real-time communication (synchronous) and store and forward communication (asynchronous) (7-9). Another feature relies on the physician’s specialty; e.g., Tele-Consultation, Tele-Orthopedics, Tele-Surgery, and Tele-Intensive Care Unit (ICU) (5). Telemedicine has specialized and general applications for military medicine. First, it enables physicians in military centers to treat a wide range of patients, especially when a high number of military forces are diffused in a wide area. The second application provides the condition for more physicians and specialists to be available for soldiers, staff, and other forces in remote areas (10).

Telemedicine improves health care quality, provides convenient access to health care services for deprived areas, and increases professional interactions between specialists. It also has other advantages such as reducing the costs and time spent on unnecessary health travels, enabling the physicians to provide professional healthcare services, facilitating the condition to exchange the health information between the specialists, and decreasing the mortality and morbidity rate through increasing the justice in health (4, 11-14). Considering these factors and the pivotal role of telemedicine in providing healthcare services in military medicine, many countries use the developed tools and applications.

The United States (US) Army used for the first time tele-radiology without picturing in the 1980s (15), which is the starting point of telemedicine use in military medicine in the world.

In 2000, a specialized telemedicine council was established in the North Atlantic Treaty Organization, while few countries used telemedicine at that time (16). Gradually, by the growth of telemedicine in the military medicine, different military forces including navy (17), air force (16), and army (18) started using its applications and tools overseas (16, 18) and in the mainlands (19) in case of possessing the technology, knowledge, and infrastructures. In recent years, telemedicine is used extensively.

The development of supportive tools such as hardware, bandwidth increase (20, 21), limited number of physicians and other health care providing resources, and difficulty to access remote areas for many of the military forces made the developed countries employ telemedicine tools and programs (22). From 2014 to 2018, several studies were conducted on telemedicine in military medicine, and different countries used their experiences. The telemedicine projects conducted during these five years include useful experiences with specific features that can be used by different countries. The current study aimed at identifying the features of telemedicine programs implemented in military medicine worldwide.

The current systematic review was performed in 2018. PubMed, Web of Science, Embase, and Scopus scientific databases were searched by the combination of keywords shown in Table 1. All steps of the study were in accordance with the PRISMA statement (23). The searches were independently performed by two researchers; contradictions were resolved by consulting with a third party. The percentage of agreement among researchers was 83.33%. All articles retrieved from the first search were transferred to EndNote version 7 reference manager software. Table 1 shows the search strategy and keywords combination formula based on scientific databases.

The search strategy in scientific databases was limited to the articles, and to make the searches comprehensive, Yahoo and Google search engines and some other related websites were also searched as gray literature. A manual search was performed in the references of the selected articles.

All original articles published in the English language from 2014 to 2018 were involved. The inclusion criteria were the availability and relevancy of the articles and the absence of political subjects. The main inclusion criterion was the implementation of telemedicine programs in a military medicine field. The articles on fields except military medicine, such as natural disasters, were excluded. All other types of articles, including reviews, case reports, letters to/from editors, short communication, conferential articles, etc., published out of the mentioned timespan were excluded from the study.

To identify the possible risk of bias, the quality of the selected studies was investigated using the Newcastle-Ottawa scale (NOS) (24). Based on the quality assessment results, out of the 13 selected studies, 12 had a satisfactory quality, and one was excluded.

After the selection of the articles, data extraction was performed using a researcher-made data extraction form designed based on the study objectives, including the telemedicine features. The form had four main parts: Study information (i.e., author’s name, the title of the article, year of publication, study design), objectives and methods (i.e., objectives, study type, data analysis), main findings including the features of telemedicine programs (i.e., types, infrastructures, instruments, country of origin, countries used the technology, specialists), and the applications and effectiveness of telemedicine in military medicine.

Content analysis was performed to extract data from the selected articles. Data were summarized by descriptive analysis and reported based on the study objectives in figures and tables.

Out of the 173 articles found in the first round of the search, based on the inclusion and exclusion criteria, 12 articles were finally selected (Figure 1). No new or relevant study was found in the manual search and gray literature. 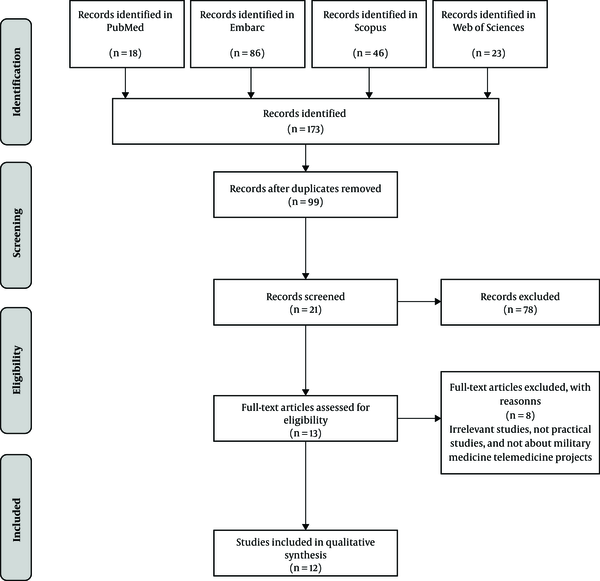 The study results showed that the majority of the studies were conducted in 2014 (n = 4). Table 2 indicates the main information of selected articles.

From the 12 selected studies, nine were performed by US Military Medicine. Other studies were conducted in South Korea, Germany, and one was a joint research project among Germany, Belgium, and Italy.

In terms of study type, eight studies were observational, and others were interventional.

The US, in addition to the internal garrisons, utilized telemedicine tools for its forces deploying overseas.

The current review showed that six of the studies were conducted in military garrisons or zones, three in the navy, and the other three in the war zones. 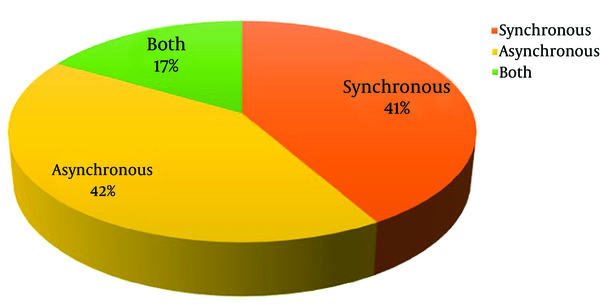 Figure 2. The synchronous and asynchronous telemedicine provided for military forces

Results of the study showed that orthopedics (n = 4), intensive care (n = 3), and psychology and psychiatry (n = 3) were the dominant specialties that used telemedicine. 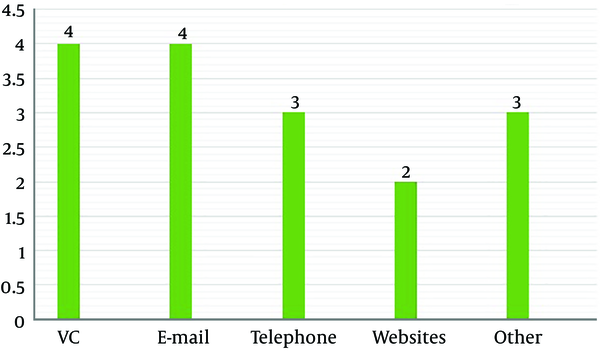 Figure 3 shows other types of communication routes including virtual communication, multimedia messaging service, and health information systems; most of the telemedicine services in military medicine were delivered through the Internet.

The study results showed that the US was the most advanced country using telemedicine in military medicine. Due to the implementation of various projects, US Military Medicine gained valuable experiences in telemedicine.

The results of the current study showed the application of different types of telemedicine in remote locations by military forces. Considering the result of the study, most destinations to implement telemedicine were overseas, where access to the physician was difficult. Gomez et al. (37), checked out the tertiary care telemedicine support by Walter Reed Army Medical Center for philanthropy missions in different countries.

Girard (3), introduced a telemedicine program to treat traumatic brain injury in American soldiers worldwide. In other countries with an extensive geographic extent, studies suggested the employment of telemedicine programs and described their potentials in a remote area.

Based on the obtained results, various medical specialties are used according to the case. Choi et al. (27) reported that the asynchronous telemedicine was used for patients with diabetes.

More attention should be paid to equipment and infrastructures to provide timely healthcare services by telemedicine, which is an important factor in its successful implementation.

To employ synchronous telemedicine, in addition to the basic equipment, the speed of the internet, advanced communication networks, bandwidth, and traffic volume should also be considered.

The results of the current study showed that VC and email were the major telemedicine communication routes. VC technology needs more advanced equipment since it is used under real-time conditions. Military medicine, concerning the limited number of specialists and human resources, needs this technology and the VC equipment should be provided to improve the quality of healthcare services. In some cases, especially asynchronous telemedicine, the healthcare providers in military medicine use email as a more possible and convenient route of communication. The lack of related studies on telemedicine in military medicine was one of the main limitations of the current study, which can be attributed to military secrets.

The telemedicine tools and potentials have many advantages such as saving time for both patients and health care providers, reducing costs, providing support in natural disasters, enhancing healthcare services, and providing patients’ satisfaction with military medicine. Today, telemedicine applications are widely used by military medicine in developed countries. Based on the current study results, advanced information technology is needed to successfully use telemedicine. Due to the emergency needs and the importance of time for providing some healthcare services, the utilization of synchronous (real-time) plus asynchronous (store and forward) telemedicine methods (hybrid method) is suggested; such technologies require specific infrastructures such as high-speed domestic and worldwide web networks, increased bandwidth, and advanced medical equipment. Further studies by policymakers and decision-makers are recommended.