Structural Equation Modeling of the Correlation Between Social Capital and the Professional Ethics of the Specialists of Shiraz University of Medical Sciences, Iran 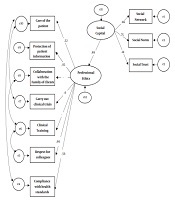 Although ethics is essential to every occupation, it is even more crucial in the professions of the healthcare sector as the spiritual and responsible behavior of these employees toward patients plays a pivotal role in improving and restoring their health. Social capital is a significant determinant of the level of professional ethics. The organizations that respect social norms and principles could create a platform of trust and mutual communication between individuals to contribute to professional ethics promotion.

The present study aimed to model the structural equation of the correlation between social capital and the professional ethics of the specialists of Shiraz University of Medical Sciences, Iran.

This study was conducted in all the hospitals in Shiraz, Iran (n = 33) in 2019. Cluster sampling was applied to select 10% of the hospitals as the research population, and several general practitioners and specialists (n = 200) completed the questionnaires for data collection. In addition, data on social capital were collected using the social capital questionnaire (2012), and the field data regarding the professional ethics of the physicians and medical specialists were collected using a researcher-made questionnaire.

Social capital is an important criterion of the survival of every system and organization, including medical organizations. Given the importance of social capital in the growth, success, and sustainability of social systems, administrators and health officials must develop basic infrastructure and an atmosphere of trust, security, and loyalty through the improvement of ethics among medical staff, especially among physicians and medical specialists.

Today’s conceptual approach could be viewed as a return to rationality and morality. Therefore, ethics are regarded as the cornerstone of developments in from a futuristic perspective (1). Ethics occasionally refer to respecting spiritual values or legal restrictions in terms of the behavior of individuals based on community standards (1, 2). According to Britannic encyclopedia, the three branches of ethics are normative ethics, applied ethics, and meta-ethics (3). Professional ethics is defined as a set of predetermined values that revolve around the ethical codes that should be observed by professionals in the workplace (4).

Although morality is essential to every occupation, it is more prominent in healthcare professions as the proper behavior and responsibility of healthcare staff toward patients play a key role in the improvement of health and wellbeing (5). Therefore, the observance of professional ethics in the performance of various medical groups is more critical than the other branches of care (6). However, the quality of ethics is influenced by multiple organizational factors, such as the quality of social capital.

Social capital encompasses the information, trust, and norms of the interactions within social networks (7). In this regard, Estrin et al. (8) have stated that social capital mainly refers to the communication and participation of the members of an organization as a means to achieving economic capital. In addition, Hasanah (9) considers social capital to be an instrument for achieving social development in various systems with an emphasis on the concept of trust. Social capital is influenced by health through several mechanisms; for instance, increased social capital leads to the release of information and subsequently improves health (10, 11). Furthermore, Shoja et al. (12) claimed that social capital is positively correlated with mental health, and individuals with a better mental health are qualified for social responsibility and playing important social roles. Therefore, special attention should be paid to professional ethics and its association with social capital given the impact of this concept on the physical and mental health of individuals in the field of health care.

Given the importance of this issue, extensive research has been conducted in this regard. In a study by Emamgholi (13), professional ethics played a positive, significant mediating role in the effect of organizational culture on social capital. Furthermore, the findings of Ali Zadeh et al. (14) indicated the correlations between the components of professional ethics and various dimensions of social capital. In the mentioned study, all the components of professional ethics (healthy relationships, attachment to work, seriousness in work, and participation in work) were observed to be positively correlated with the dimensions of social capital (structural, cognitive, and relational capital).

According to the study by Torkzadeh et al. (15), contrary to the concept of social capital in Western foundations and theories and from the perspective of the Holy Qur’an, social capital is a social phenomenon based on principles such as faith, virtue, vision, conviction, and belief in Imamate, as well as spiritual orientation toward divine revelation or salvation, providing the context for achieving positive social outcomes and worldly and afterworld rewards by individuals and social groups.

In a review by Ahmadi et al. (16), the improvement of social capital and communication networks was reported to be effective in enhancing the level of professional ethics, and technology communication and information also mediated the correlations between social capital variables and the promotion of professional ethics. On the other hand, the results obtained by Ghasemizadeh et al. (17) indicated that the cognitive dimension of social capital could predict professional ethics. In another review by Samari and Mesibi (18), the climate of legal and regulatory work ethics was observed to have a more significant impact on the other aspects of the ethics of the work atmosphere, creating an appropriate working climate and improving the job performance of teachers, which ultimately enhanced the development of social capital.

In general, the present study aimed to predict the professional ethics of physicians and medical specialists based on social capital in Shiraz University of Medical Sciences, Iran. The following research questions were also addressed:

1) What is the status of social capital in the field of research?

2) What is the status of professional ethics in the field of research?

3) Is the professional ethics of medical professionals predictable based on their perception of the social capital in their workplace?

This descriptive-correlational study was conducted on all the hospitals in Shiraz (n = 33) in 2019. Via cluster sampling, 10% of the hospitals were selected as the research sample, and the questionnaires were completed by all the general practitioners and specialists of these centers (n = 200).

The scale of professional ethics consisted of seven dimensions, including after patient care, protection of information and interaction with the family of patients, conduction of clinical research, provision of clinical education, respect for colleagues, and adherence to professional standards. The items of the scale were constructed based on a range of five options. In order to calculate the validity, the correlations between the items and total score of each dimension were evaluated, and the total score of each dimensions and its validity were observed to be high. In order to measure the reliability of each dimension of the scale, Cronbach’s alpha was used, which had all the dimensions of high reliability. (Table 2).

By providing the necessary explanations regarding the importance and objectives of the research, non-compulsion in the response, non-receipt of the respondents’ details, confidentiality, and non-disclosure of the opinions, the obtained results were only used to improve the effectiveness of organizational behavior and inform the respondents.

4.1. What Is the Status of Social Capital in the Field of Research?

The results of one-sample t-test (Table 3) indicated that the mean social capital was higher than cut-off points (Table 3). Therefore, the status of the social capital of the hospitals was considered favorable.

4.2. What Is the Status of Professional Ethics in the Field of Research?

4.3. Is the Professional Ethics of Medical Professionals Predictable Based on Their Perception of the Social Capital in the Workplace?

In order to evaluate the goodness-of-fit of the model, different values of model fitting were calculated in the AMOS software. Table 6 shows the obtained data on the general fit of the model. Regarding the number of the samples, it could be stated that the fitting of the model was entirely within the acceptable range and was relatively acceptable, while the root mean square error of approximation (RMSEA) index was considered the most important indicator in this context and obtained at 0.079 to confirm the mentioned finding.

Social capital is another important predictor of professional health ethics. Our findings in this regard showed that the membership of professors as a homogeneous group in various social networks inside and outside the field of medicine and their strong support for each other was associated with positive results and outcomes, which in turn led to the development of ethics. Professionalism is positive in their personal and interpersonal performance through social capital. Our findings in this regard are consistent with the views of Pope (24) who stated that the development of social capital in a social system is based on ethical activities and ethical climate in the organization. In addition, Breakey (25) stated that by decreasing social capital, anti-moral behaviors (e.g., theft, and violence) may develop in organizations, while increased social capital would lead to the higher respect of the rights of citizens (1). Due to the numerous challenges faced by physicians in contact with patients, attention to ethics in decision-making and performance are considered paramount, and social capital could be a significant influential factor in professional ethics.

Social capital is an important criterion of the survival of every organization, including the medical and healthcare sectors. Given the importance of social capital in the growth, success, and sustainability of social systems, administrators and health officials must develop an atmosphere of trust, safety, and loyalty through the development of basic infrastructure and promotion of ethics among medical staff, especially in physicians and medical specialists.

Lack of cooperation in completing the questionnaires on behalf of some professors;

Lengthy administrative process to obtain the permit to distribute the questionnaires.

The need to examine the correlations between the variables of the current research with other organizational factors in further studies;

Conducting similar research in a wider area of medical universities;

Considering that social capital had a positive function in our study, university administrators and officials should attempt to enhance and integrate social networks, improve the existing space in different sectors, and increase social trust.

Copyright © 2021, Educational Research in Medical Sciences. This is an open-access article distributed under the terms of the Creative Commons Attribution-NonCommercial 4.0 International License (http://creativecommons.org/licenses/by-nc/4.0/) which permits copy and redistribute the material just in noncommercial usages, provided the original work is properly cited.
COMMENTS