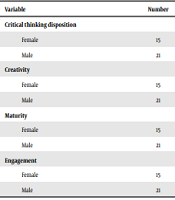 The present study aimed to assess the critical thinking disposition of the pharmacy faculty members of Ahvaz Jundishapur University of Medical Sciences, Iran in 2018.

In this descriptive, cross-sectional study, data were collected using a questionnaire consisting of two sections. The first section included demographic variables, and the second section was Ricketts critical thinking disposition inventory. The questionnaire was provided to 41 faculty members, and 36 questionnaires were completed and returned. Data analysis was performed in SPSS version 18 using t-test and Pearson's correlation-coefficient.

In order to improve critical thinking, a substantial revision of the educational curriculum is required, and such a change involves contemplating the role of the academic staff and teaching methods. Critical thinking is a fundamental component of professional competence in medical sciences, and the empowerment of academic staff in the areas of teaching and leadership remarkably contributes to the attainment of the mission and broad goals of universities.

The present study aimed to evaluate the critical thinking disposition of the pharmacy faculty members of Ahvaz Jundishapur University of Medical Sciences (AJUMS), Iran in 2018.

This cross-sectional study was conducted on 41 pharmacy faculty members of Ahvaz Jundishapur University of Medical Sciences in Ahvaz, Iran in 2018. Universal sampling was performed to select the participants, and data were collected using a questionnaire with two sections. The first section included the demographic data of the participants, including age, gender, academic rank, and teaching experience. The second section of the questionnaire was Ricketts critical thinking disposition inventory (CTDI) (17), which consisted of 33 items and three subscales, including creativity (11 items), maturity (nine items), and engagement (13 items). The items were scored based on a five-point Likert scale (completely disagree = 1, completely agree = 5). The creativity domain evaluated the tendency to creativity and clever curiosities in exploring realities, the maturity domain was focused on learners' awareness of the complexity of real issues and their acceptance of others’ viewpoints considering their own and others’ cognitive knowledge, and the engagement domain evaluated learners’ readiness to argue in different situations and their confidence in their own abilities.

The CTDI has been translated into Persian and used in several studies, with the obtained results indicating that the Persian version of the instrument is highly reliable and valid in the Iranian population (18). According to Pakmehr et al., the reliability coefficients of the subscales of creativity, engagement, and maturity are 0.64, 0.76, and 0.72, respectively, and the value has been estimated at 0.68 for the entire tool (19). In the present study, the Cronbach's alpha coefficient of the subscales of creativity, maturity, and engagement and the entire scale were calculated to be 0.69, 0.51, 0.84, and 0.79, respectively.

Data were coded and analyzed in SPSS version 20 (IBM Corporation, Armonk, NY) using descriptive and analytical statistics. In order to use parametric tests, the normal distribution of the data was assessed using the Kolmogorov-Smirnov test. Considering that the significance level of this test for the CTD variable and its subscales was higher than 0.05, the normal distribution of the CTD data and its subscales was confirmed, and parametric tests were used. In addition, one-sample t-test was applied to compare the means, independent t-test was used for the group comparisons, and Pearson's correlation-coefficient was employed to determine the correlations between the variables. In all the statistical analyses, the P-value of less than 0.05 was considered significant.

Table 1. One-sample T-test for CTD and Its Subscales in Pharmacy Faculty Members

Table 2. Comparison of Mean Scores of CTD and Subscales Based on Gender

The obtained results indicated no significant correlations between the mean scores of CTD and its subscales with the variables of age and work experience (Table 3).

Table 3. Correlations of Mean Scores of CTD and Subscales with Age and Work Experience

According to the results of the present study, the critical thinking disposition of the pharmacy faculty members was above average and relatively desirable. This is consistent with the results obtained by Rafiee et al. (22), while inconsistent with the studies reporting the low level of critical thinking disposition in university faculty members (23, 24). For instance, the CTD level of university faculty members was reported to be relatively low in a study conducted in Turkey (25). The differences in the CTD in various studies could be due to the variations in the study populations, cultural characteristics, sample size, and research instruments.

Considering that medical practitioners should be able to resolve problems and make proper decisions while dealing with patients in the clinical setting, the graduates of medical sciences in various fields must acquire competency and other necessary qualifications, especially those associated with critical thinking, during their academic studies in the university; evidently, faculty members play a fundamental role in this regard. Medical sciences students must strengthen their critical thinking skills and disposition more than the students of other sciences (28). Unfortunately, studies have indicated that in most of the universities in Iran, the CTD level of students is rather low and undesirable (23, 29, 30). Therefore, special attention must be paid to the attitudes of professors toward critical thinking skills and their teaching methods of choice, as well as educational programs.

The results of the present study demonstrated no significant differences in the CTD level based on the gender and academic rank of the faculty members, which is in line with the findings of Rafiei et al. (22) and Baba Mohammadi et al. (24), while inconsistent with the study by Safari et al. (23), who reported significant differences between male and female teachers and their academic rank in the creativity and engagement subscales of CTD. This discrepancy could be due to the differences in the sample populations and research tools.

The current research showed no significant correlations between the mean scores of CTD, age, and work experience of the faculty members, which is consistent with the results obtained by Safari et al. (23) and Baba Mohammadi et al. (24) possibly due to the general atmosphere of universities and giving CTD a lower profile.