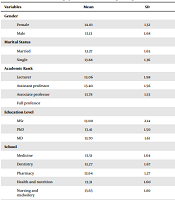 Status of Knowledge Sharing Intention Among the Faculty Members of Kermanshah University of Medical Sciences, Iran (2019)

Knowledge sharing within an organization plays a key role in developing scientific production.

The present study aimed to predict the knowledge sharing intention among the faculty members of Kermanshah University of Medical Sciences (KUMS), Iran.

This cross-sectional study was conducted on 154 faculty members of KUMS in the spring of 2019. Participants were selected via random sampling with a probability proportional to size. Data were collected using self-report questionnaires. Data analysis was performed in SPSS version 16 using independent t-test, one-way analysis of variance (ANOVA), bivariate correlations, and linear regression analysis at 95% significance level.

According to the results, designing interventions focusing on the constructs of attitude and perceived behavior control could yield beneficial findings for promoting knowledge sharing among faculty members.

Knowledge is regarded as the most valuable source of competitive economy production and dynamic progress in the path to development (1). Knowledge is a proven belief that enhances the capacity of an institution to operate efficiently (2). Knowledge formation occurs at an individual or group level; at an individual level, individuals could form knowledge independently, while knowledge formation within a group requires the collaboration of the members and the transformation of individual knowledge into group knowledge depending on the members’ desire to share their knowledge (1). Since the inadequate management of any resource leads to its waste, considerable budget and effort are allocated to the issues revolving around knowledge and its better management in developed countries (3).

Despite the benefits of knowledge sharing, several studies have confirmed that obstacles such as a lack of motivation and proper context hinder the widespread improvement of this area in different organizations. Recently, knowledge sharing has been recognized as a major challenge in knowledge management (7-9). On the other hand, the advancement of science and technology necessitate more teamwork, and the new forms of teamwork are associated with an increasing need to adopt strategies for the optimal utilization of opportunities and collaboration of knowledgeable individuals (10-12).

Universities are the main centers of knowledge production and management in every country, taking great steps along the path of developing a knowledge-based economy through the integration of education and research (13). By creating space for the collaboration of the owners of knowledge and skills, universities provide the opportunity for teamwork between these individuals whose productivity will increase by sharing their information as well (3). However, the misconception regarding the uselessness of knowledge sharing, the desire to work independently and compete, and the academic culture that urges researchers to constantly use repetitive patterns of thought rather than shared unique information are major obstacles to knowledge sharing (14, 15). Therefore, determining the reinforcing factors of knowledge sharing is essential in the field of knowledge management (16).

Recognizing the influential factors in knowledge sharing builds a proper guide for educational planners. Furthermore, using theories of behavior analysis could be beneficial in this regard. The theory of planned behavior (TPB) is a pattern established for behavioral changes, which has been used in several studies (17-20). Accordingly, intention is the major determinant of behavior and is influenced by the three factors, including one's attitude and beliefs toward doing a task, subjective norms of what others think about one's behavior, and the perceived behavioral control that shows one's perception of their ability to display an intended behavior (17).

The present study aimed to predict the level of knowledge sharing intention among the faculty members of Kermanshah University of Medical Sciences (KUMS), Iran.

This descriptive, cross-sectional study was conducted on 154 faculty members of KUMS in the spring of 2019. The sample size was determined based on a pilot study of the standard deviation of the dependent variable (i.e., knowledge sharing intention score), which was estimated to be 1.79, the significance level of the test (α = 5%), and the error rate of 1/10 unit. The final sample size was determined to be 129 samples. Considering the probability of 20% attrition, 154 participants were enrolled in the study.

For sample selection and data collection, different schools of KUMS were initially considered as clusters, and the participants were selected via simple random sampling with a probability proportional to the size of each cluster. Research objectives and procedures were explained to the participants, and they were enrolled willingly. The study protocol was approved by the Research Ethics Committee of KUMS (ethics code: IR.KUMS.REC.1397.1002). Among 154 subjects, 140 faculty members voluntarily agreed to participate in the study. The response rate was estimated at 91%, and data were collected using a self-report questionnaire.

The questionnaire consisted of two sections, and data were collected in a self-report manner.

Prior to the main study, a pilot study was conducted to assess the utility of the instrumentation. The participants of the pilot study were 20 faculty members of KUMS, which was similar to those who participated in the main study. In order to facilitate the participants’ responses to the instrument items, all the items were standardized to a five-point Likert scale, ranging from score one (strongly disagree) to score five (strongly agree). The reliability of the questionnaire was confirmed using the Cronbach's alpha coefficient, and the content validity was confirmed by a panel of experts.

Data analysis was performed in SPSS version 16 using bivariate correlations to ensure the magnitude and direction of the associations between the TPB components. In addition, linear regression analysis was used to explain the variations in knowledge sharing intention based on attitude, subjective norms, and perceived behavioral control. Independent t-test and one-way analysis of variance (ANOVA) were also applied to assess the correlations between knowledge sharing intention and demographic variables. Cronbach’s alpha coefficient was used to estimate the internal consistency of various measures.

a Significant correlation at 0.01 (two-tailed).

Table 4. Predictors of Knowledge Sharing Intention among Faculty Members Based on Attitudes, Subjective Norms, and Perceived Behavioral Control a

Among the demographic variables evaluated in our research, only gender had a significant correlation with knowledge sharing intention, and knowledge sharing intention was more common among the female faculty members. This is in congruence with the study by Lin, which assessed the differences in the patterns of male and female behavior in organizations, and it was concluded that women's presence in large groups positively influenced the degree of knowledge sharing due to greater altruism and better understanding of women regarding others' demands compared to men, who often focus on themselves and work in a goal-oriented manner (28).

In another study, Chai et al. investigated the effects of gender on the level of knowledge sharing and its mechanism. Although women had more confidence in the system, more social bonds with the group, more interactions, and a greater intention to share knowledge compared to men, no significant difference was observed between men and women in their intention to share knowledge in the mentioned study (29). Given the importance of knowledge sharing in every organization, it seems essential to design interventions for men and women regarding the possible key role of women in this area.

The main limitations of our study were the inaccessibility of a large number of KUMS faculty members and lack of cooperation on behalf of some faculty members to accurately complete the questionnaires, which could have potentially compromised the generalizability of our findings in some components of the TPB. Additionally, the unwillingness of some KUMS faculty members to cooperate might be regarded as their unwillingness to share knowledge, which could not be verified. Further studies should be performed on larger sample sizes. It is also suggested that new studies be designed focusing on the positive role of female faculty members in knowledge sharing.