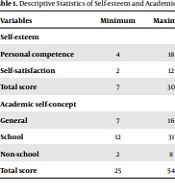 Correlation Between Self-esteem and Academic Self-concept in Medical Students

It is essential to recognize the influential factors in academic achievement to prevent academic failure. The present study aimed to investigate the correlation between self-esteem and academic self-concept in medical students.

According to the results, self-esteem and academic self-concept were significantly correlated. Therefore, universities and professors must pay attention to students' self-concept and self-esteem, improve their positive attitude toward themselves, and prevent negative attitudes.

Self-esteem has long been a major debate among psychologists. Rogers introduced the concepts of self-ideal and self-perception, exploring the same issues that are currently referred to as self-esteem. The same distinction between self-concept and self-esteem exists between the ideal and the perceived self. Self-esteem is valuable as one’s perception of oneself and leading the individuals toward the image they desire rather than their true self. Therefore, the difference between reality and ideal is the gap between self-concept and self-esteem (2).

Given the significant effect of these two categories on academic achievement and the lack of studies in this regard on medical students, the present study aimed to investigate the correlation between self-esteem and academic self-concept from the perspective of medical students.

This descriptive-analytical cross-sectional study was conducted on the residents, interns, and clerkships of Shahid Beheshti Hospital in Kashan, Iran who were engaged in educational activities in the academic year 2019. The participants were selected via convenience sampling. Data were collected using self-esteem and academic self-concept questionnaires.

This questionnaire consisted of 10 items, which were scored based on a four-point Likert scale (Strongly Agree-Strongly Disagree). In the study by Bahlul and Rajabi (9), 129 students who were selected from all the first-year students living in the dormitories of Shahid Chamran University, were evaluated using the Rosenberg self-esteem scale. According to the findings, the internal consistency coefficient of the entire sample population was 0.84, while it was 0.87 in the male students, and 0.80 in the female students. In addition, the correlation-coefficients of the items in each scale were reported to be 0.56 - 0.72, and all the variables were considered significant at P < 0.001. Factor analysis using the main axis factorization (Promax rotation) in the mentioned scale of these factors included personal competence and self-satisfaction. In the present study, the reliability of the questionnaire was confirmed at the Cronbach's alpha coefficient of 0.883.

Data analysis was performed in SPSS version 16 using descriptive statistics (frequency distribution and central indicators) and inferential statistics, such as Pearson’s correlation-coefficient to assess the correlation between self-esteem and academic self-concept. In all the statistical analyses, the P-value of less than 0.05 was considered significant.

In total, 126 medical students (69 females with the mean age of 27.56 ± 5.35 years) were enrolled in the study, including residents (n = 46), interns (n = 49), and clerkships (n = 30), who were selected from Shahid Beheshti Hospital in Kashan, Iran. Notably, one participant did not specify his educational degree.

a Data reported as correlation-coefficients (P-value).

Table 3. Results of Pearson's Correlation-Coefficient on Academic Self-concept and Self-esteem by Gender, Age, and Education Level

a Data reported as correlation-coefficients (P-value).

The results of the present study indicated a significant positive correlation between academic self-concept and self-esteem in the residents, interns, and clerkships. In a similar study, Ghaffari and Arfa Balluchi evaluated the correlation between achievement motivation and academic self-concept with exam anxiety in the graduate students of Ferdowsi University of Mashhad (Iran), reporting that a combination of motivation and academic self-concept could predict exam anxiety (11). In the mentioned study, the results of multivariate analysis of variance showed no significant differences between male and female students in terms of academic self-concept, achievement motivation, and test anxiety. Therefore, the researchers concluded that special attention should be paid to the beliefs and perceptions of individuals about themselves and their abilities, as well as the motivational variables that affect their performance in educational situations (11).

The results of the present study are inconsistent with the study by Nagy et al. (13), which investigated the self-concept of male and female students, showing that the male students had higher self-concept compared to the female students. This discrepancy may be due to differences in the target population and the research community. In another study, Yousefi assessed the correlation between parenting styles, social skills, and various aspects of self-concept in high school students. The obtained results indicated that in the Iranian culture, the perception of the family as a determinant or authoritarian predicts antisocial behavior, aggression, and impulsive behaviors in individuals. On the other hand, the perception of family as an intimate and supportive unit could predicts all aspects of students' self-concept (14).

In another study, Najarpour Ostadi evaluated the effects of family emotional climate, self-concept, self-esteem, and socioeconomic status on the formation of youth identity, reporting that individuals with a favorable family emotional climate, positive self-concept, high self-esteem, and socioeconomic status were superior in terms of identity formation. Furthermore, the mentioned study indicated that gender and being a student had no effect on identity formation, but increased age was associated with identity in students (16).

Ghobari Bonab and Hejazi investigated the correlation between courage and self-esteem with academic achievement in normal and gifted students. According to the obtained results, gifted learners were superior to normal learners in terms of courage, self-esteem, and academic achievement, while no significant differences were observed between these variables in two genders (19).

Although our study was performed in a teaching hospital, it was only performed on medical students at different levels of education. Therefore, the studied variables in students of other medical sciences should be examined for more accurate results.

Since other factors could also affect the academic achievement of students and these factors play a key role in the optimal education of graduates, qualitative studies are recommended in this regard.

This article was extracted from a general medicine dissertation (approval code: 2470) conducted at Kashan University of Medical Sciences, Iran.

Copyright © 2022, Educational Research in Medical Sciences. This is an open-access article distributed under the terms of the Creative Commons Attribution-NonCommercial 4.0 International License (http://creativecommons.org/licenses/by-nc/4.0/) which permits copy and redistribute the material just in noncommercial usages, provided the original work is properly cited.
download pdf 110.21 KB Get Permission (article level) Import into EndNote Import into BibTex
Number of Comments: 0